Received wisdom is just that: wisdom received from others. But who are the others and what makes them credible sources? Does what they say amount to wisdom or something else? The received wisdom for tamping, for example—the advice we were told as young baristas which is still disseminated carelessly on the internet—says that a barista should press down on the coffee with about 30 to 40 pounds of pressure. But what is 30 pounds in terms of pressure? In terms of anything, really? Many of us would be hard pressed to know these things, which is just one of the reasons we shouldn’t work at a carnival. Isn’t the machine the one that has to worry about pressure? The short answer is yes. The objective of tamping is simple: compress the puck (i.e. exorcise the air pockets, the space between particles) so that it creates sufficient pressure to make espresso. It sure helps if the tamp is even, too. So two objectives: even and compressed.

We briefly touched on tamping in a previous article about espresso. “Your tamping action should be firm and even,” we wrote, “aiming to compact the coffee entirely without applying unnecessary force.” That is the answer in a nutshell and is plenty sufficient given that any more force than “enough” is entirely redundant and possibly harmful (to your wrist, not the puck, which will be fine). Even then, though, we felt the need to mention, perhaps as a precaution against pervasive dogmatism, the 30-lbs. business, going so far as to suggest, for the most zealous readers, to use a bathroom scale to measure pressure. While it is true that tamping on a scale will teach you about tamping on a scale, and probably make you feel silly, it isn’t necessary and probably won’t enhance your technique. The counter is fine. A tamping mat is even better.

The key to tamping is not in the particulars of pressure but in the piston. Wrist injuries from tamping have long been a topic of conversation in coffee circles. The responsible party is, at least to some degree, all the talk of getting the pressure up to 30 or 40 pounds. It screams press harder! We have all seen baristas, especially new ones, exert so much pressure in tamp that they struggle or grunt. Kinesthetically speaking, this is poor form; the initial tamp, if done correctly, sends energy down from the shoulder and arm to the puck; the wrist, being one link in a long chain, should not bear the brunt of force. Instead, the wrist simply delivers that which came before it. In a sustained effort, though, after the initial force, when a barista continues to push, strain, to maximize tamping pressure, the energy is coming only from the wrist. This is bad news for the wrist because the puck, being already compacted, returns all the force to the wrist. View such an action from the side and you will see that the wrist has become crooked, a hinge, a pivot point, instead of a firm line in the arm.

A correct tamp, though, is all about the motion of a piston. On this, we can learn a lot from the four-stroke internal combustion engine. Such an engine, to simplify the analogy, has a crankshaft (shoulder / upper arm), connecting rod (elbow / lower arm), wrist pin (wrist), and piston (tamper). If all the force was exerted by the wrist pin, it wouldn’t be a very efficient system (and yes, we know, it wouldn’t be possible). The design is such that the rotating crankshaft transfers energy to the connecting rod and down onto the piston that seats perfectly inside the cylinder (filtration basket); when the pressure has been delivered, the crankshaft’s motion withdraws the piston and the process begins again. The whole thing happens fast and is one continuous motion. The same should happen to the parts involved in tamping. The energy should start in the shoulder, travel down the arm and through the tamper; a quick press on the coffee grounds compresses them; and then the tamper should be withdrawn naturally with the force being returned by the compressed puck à la Newton’s third law. A tamp is all one motion. Down and back up. There should be no delay, no pushing hard, no struggle, certainly no pain, and no bend in the wrist. Just a nice and easy tamp.

We have put together a series of photos to show the process from beginning to end. Starting with step 2, a black line has been included to highlight the orientation of the arm through the process. Notice how the entire system is straight and thus no unnecessary extra stress is placed on the wrist, which would have caused it to bend awkwardly and, over the course of hundreds of tamps, possibly become injured. The entire motion, including the down and the up, as in the case of a four-stroke engine piston, is one smooth motion with no pause (or a very brief one) in the middle.

1. Get into position. Grab the tamper with your palm like you would a doorknob, placing your thumb and forefinger gently against the slope; you will use these fingers to steady the tamper. Stand with your hip perpendicular to the counter. 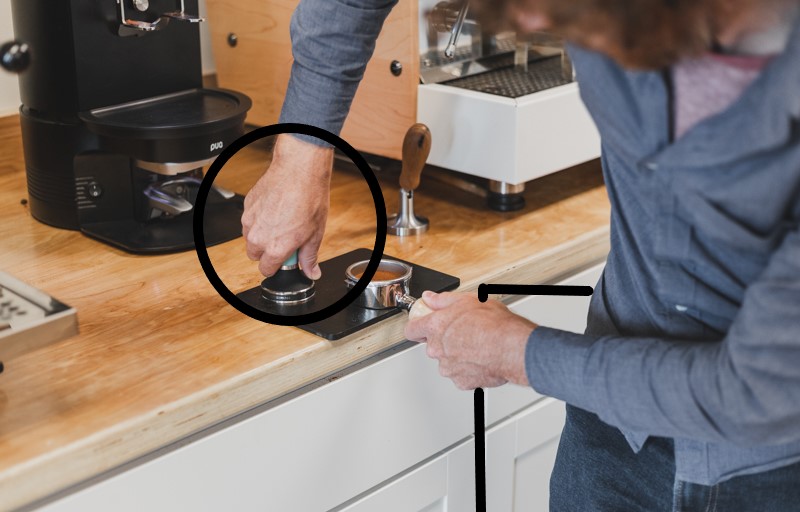 2. Form a 90-degree angle from shoulder to tamper, positioning your elbow as the vertex. Get the tamper in position directly above the portafilter basket and begin the downward movement in your shoulder, not in your hand. 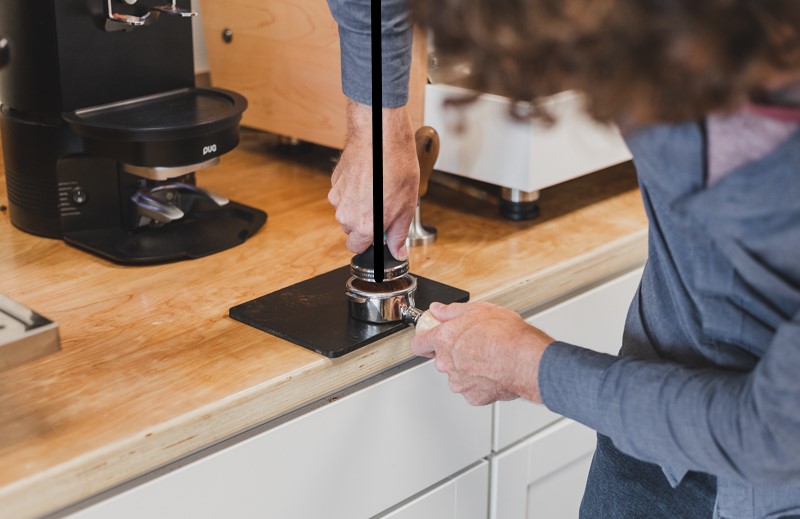 3. Continue the motion from the shoulder through elbow and down through the wrist to the tamper. 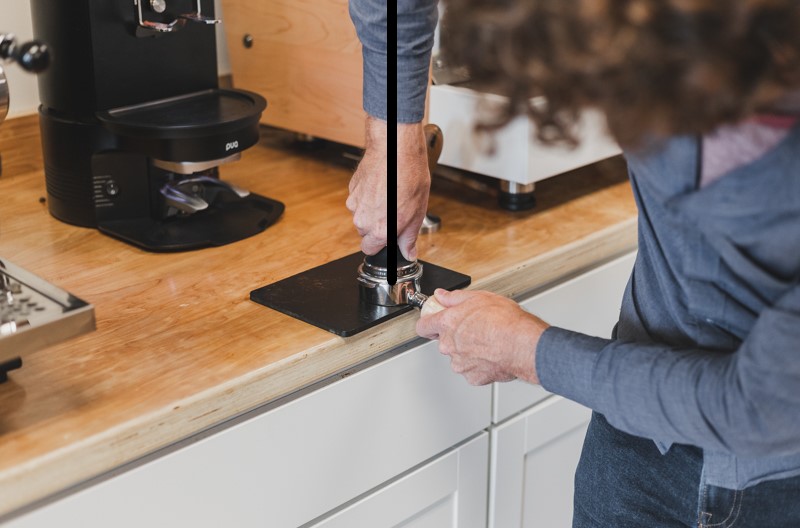 4. Compress the puck with the energy transferred from the shoulder and nothing more. 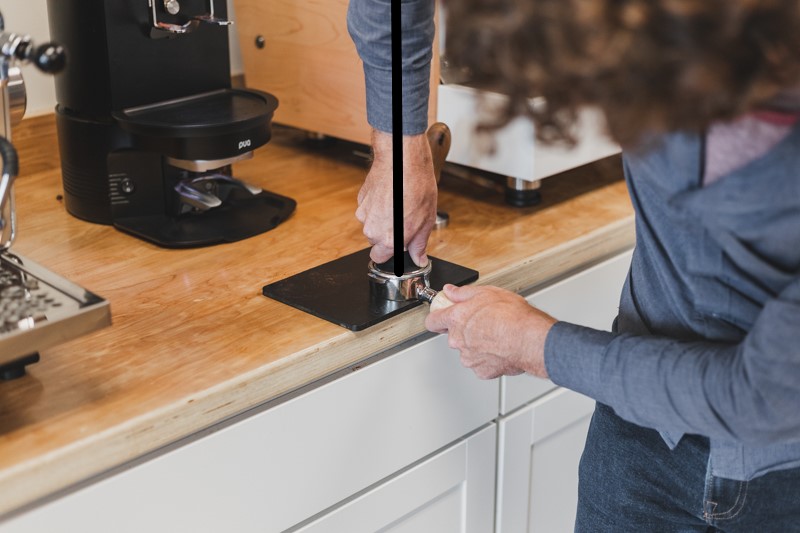 5. After a quick compression, withdraw the tamper immediately with no pause between down and up motions. 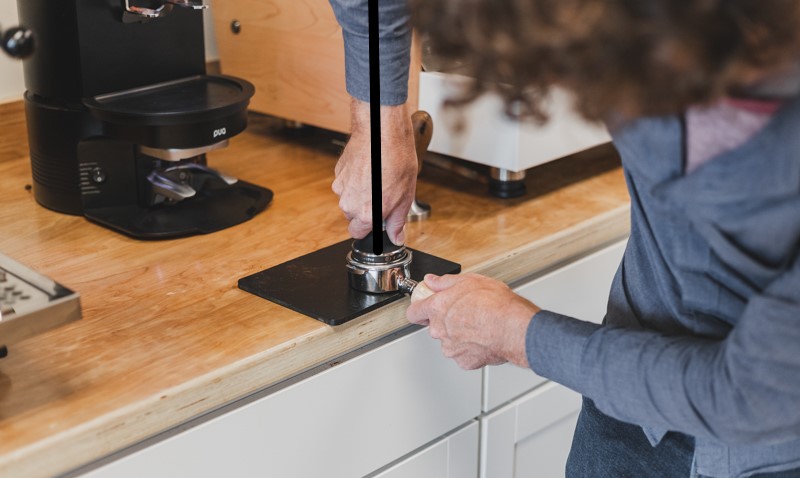 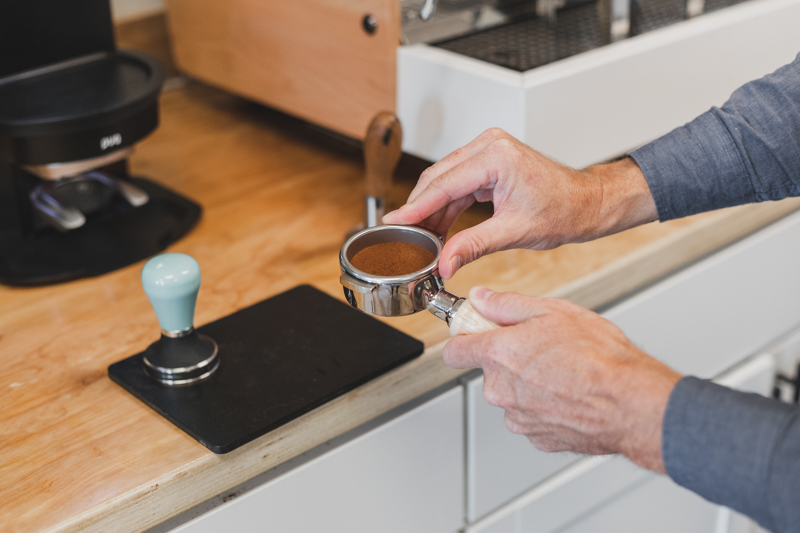 We hope that this has provided a solid introduction to tamping. As with most things in coffee, it is not as difficult as it might at first seem from afar. The objective is to level and compact the coffee bed so that the water under pressure will evenly extract the tasty bits from the coffee grounds. There are a couple easy ways to check your work. First, put the tamper inside the portafilter basket after tamping. If any side of the tamper is higher than another, the tamp is uneven. If it passes this first test, pull a shot, but use a bottomless portafilter so you can see the espresso dripping from the filter. If the water favors one side of the basket, or if the espresso is darker on one side, the tamp may be uneven (or channeling is happening, or both). Over time, you will master the art of tamping and your wrist will be the better for it. So will the espresso!