Just what is it that makes a Slayer shot so unique? It has a good deal to do with the physics of how water extracts coffee. In this video, we explore the concepts of pressure and flow, and what goes into making an exceptional shot of espresso.

Few machines come close to matching the practical versatility and aesthetic appeal offered in Slayer. Sometimes mistaken as merely a piece of art, Slayer’s unique and precision-controlled approach to extraction challenges us to re-examine the way we think about espresso and opens doors for new flavor possibilities. An understanding of Slayer’s capabilities first requires an understanding of its process, the physics that make it work, and the concept that sets it apart from other machines in the flavor profiling game--that is, moderation of pressure through variability of flow.

In terms of its extraction process, Slayer’s approach is very unique; Instead of offering direct control over pressure during the course of a brew cycle, Slayer’s internal gear pump actually operates at full pressure during both its pre-infusion and full infusion stages. The secret behind Slayer’s approach to extraction can be found under the hood. The blue adjustment knob, seen here, is part of what’s called a Needle Valve. A Needle Valve allows precise regulation of flow through the adjustment of a threaded, needle-like shaft that works to create restriction and moderate pressure, and is the key piece of hardware that distinguishes Slayer from all other espresso machines. 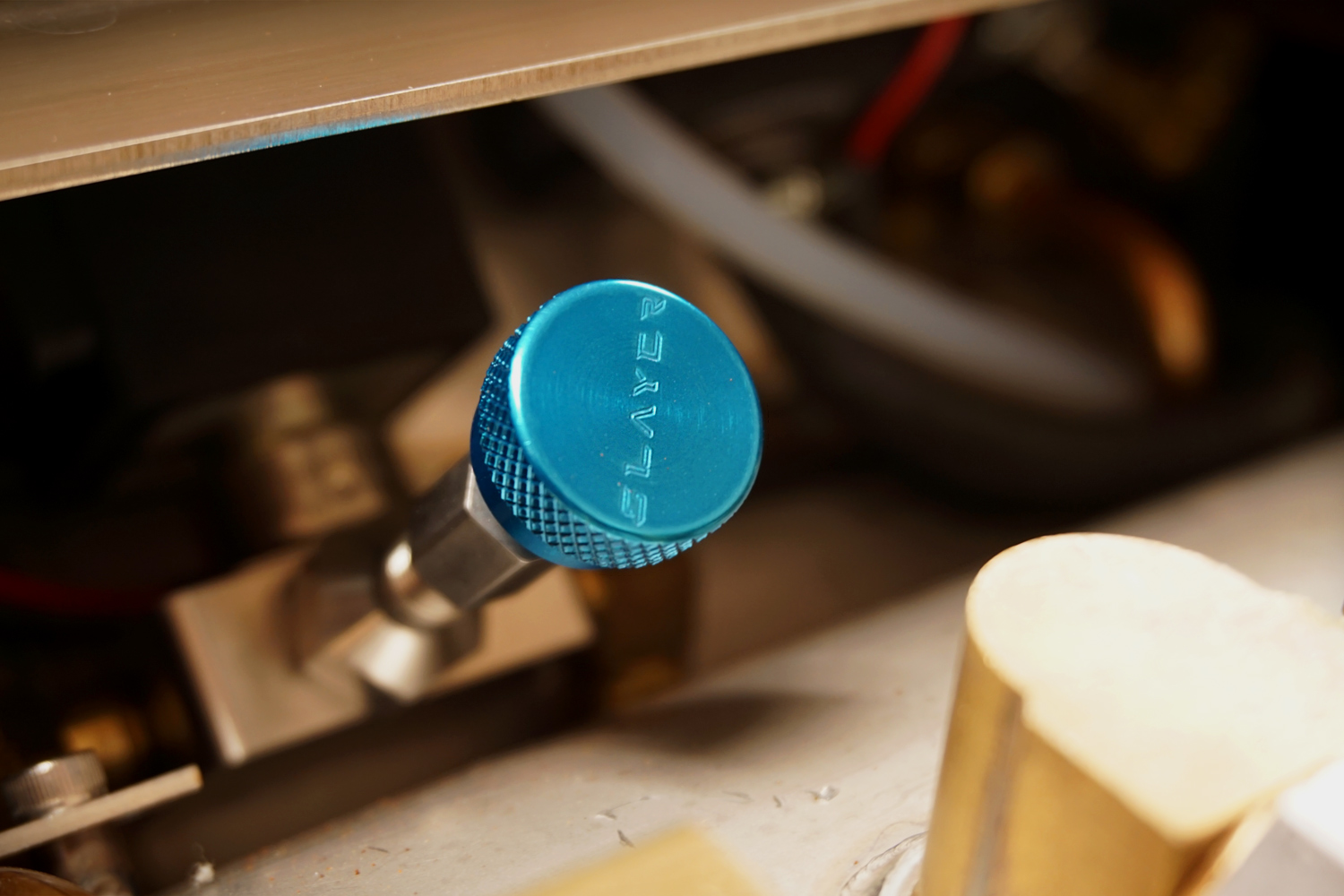 What is the relationship between pressure and flow?

Simply put, pressure is the continuous application of physical force--in this case the pump--and flow is the actual movement of water. Now here’s where it gets tricky. The initial pressure that makes it to the coffee varies based on the amount of restriction created for the water prior to it entering the brew chamber. In this case, the majority of the initial pressure created by the pump is applied at the needle valve itself, and the minimized flow through that valve works to slowly fill the brew chamber, resulting in a low pressure introduction of water at the puck. As shown in the film, our local Fire Department came out to help us portray this concept. Utilizing 2 hoses, each with a different inner diameter but both operating under the same pressure (about 100PSI), 2 barrels were filled simultaneously to demonstrate how restriction works to moderate flow, and therefore pressure. This experiment proved in a more practical sense how the needle valve in Slayer works to moderate the pressure inside its brew chamber during pre-infusion. In our demonstration the pressure applied to the inside of the barrel under the larger hose increased quickly because of the high rate of flow. The pressure applied to the inside of the barrel under the smaller hose increased slowly as a result of the decreased rate of flow caused by additional restriction in the water line.

How is Slayer different from Pressure Profiling machines?

Most espresso machines kick on at full pressure with full flow and extraction lasts about 25-30 seconds. Some machines offer variable pressure but typically begin with water line pressure and pre-infusion will last about 5-7 seconds. Slayer, contrary to popular belief, isn't a Pressure Profiling machine, but instead allows 3 stages of flow (off, pre-brew, brew) which are centered around the ability to enhance and extend the pre-infusion process as desired. It’s important to note, however, that both Slayer and Pressure Profiling machines approach flavor profiling through the same basic medium--variable flow, or more broken down--controlled agitation. Variability of flow in Slayer’s pre-brew stage is the machine’s most defining attribute and has major implications.

Why is this important?

Advanced brewing concepts teach us that the process of extraction is nonlinear, meaning extraction doesn’t simply operate on a track. Through controlled manipulation of key brewing factors, like agitation, specific flavor characteristics can actually be targeted and accentuated. By increasing or decreasing the rate of flow during the window of pre-infusion, and thereby manipulating pre-infusion time, two shots of espresso at the same extraction percentage can taste different. Figure 1. shows what extraction would look like if it were only operating linearly, say on a track. Figure 2. exemplifies extraction as variable not only by its extent, but also by its content.

Flavor profiling, although a new and widely unexplored science in the context of coffee is, for us, the true beauty of Slayer. At its heart is a completely new perspective on a long-standing status quo, offering the opportunity for customized results through the application of basic physics. It's not rocket science, in fact it's as elementary as a hose in your backyard. But the implications of this simple concept have never before been fully realized. 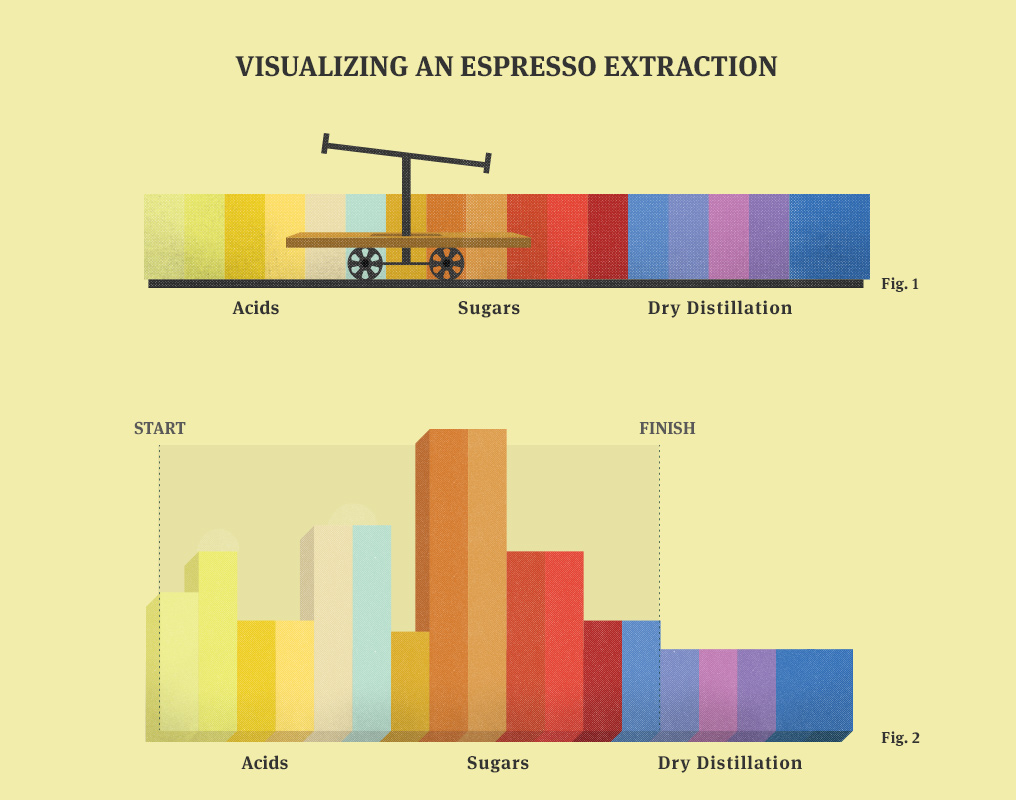