A few years ago, if someone had asked us, and surely they did at some point, “What is extraction?”, we would have delivered an honest and succinct reply that went something like this: “Extraction is the process in which water comes in contact with ground coffee and extracts, or pulls out, the good stuff (caffeine, acidity, sweetness, etc.).” Simple and not wrong if not entirely specific. Our grandparents were doing this with percolators and we are doing it with V60s. Same thing.

For most of us, that answer still suffices. The good stuff is extracted from the coffee grounds by hot water and we drink the solution. Mmm! We don’t need to know anything more to enjoy it. Very few of us, at least, ever reach for answers beyond our palate or central nervous system.

To many, the conversation about extraction percentages is inside baseball. Not important but to a select few niche obsessives. Irrelevant even. To others, though, this conversation brings a welcome scientific cachet to previously barbaric conversations about the good- or bad-ness of cups of coffee. Lucky for the latter folks, VST, a technology company that had invented a USB floppy disk drive for Apple (way back in the day), among other projects, released a coffee-specific device called a refractometer that measures the TDS (total dissolved solids) of coffee and espresso. VST also released a software to interpret the TDS readings, turning them from plain numbers into extraction percentages, which refer to the percentage of material pulled from coffee grounds. 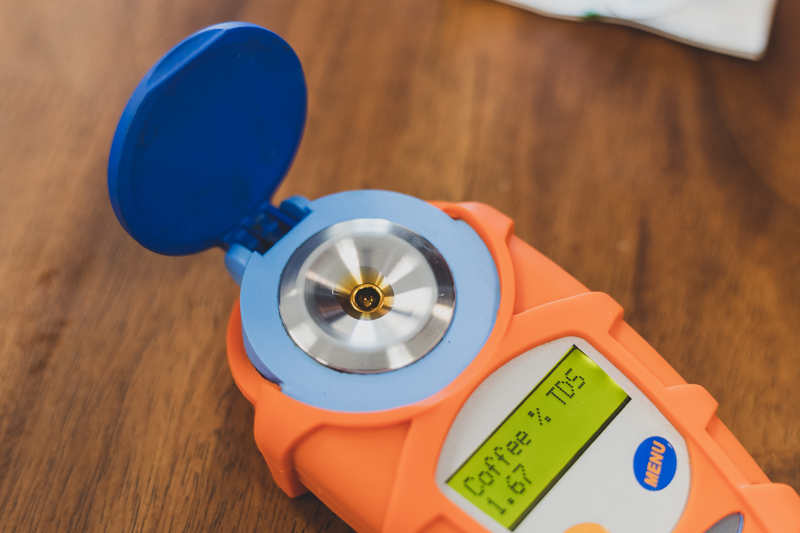 Conventional wisdom says it is possible to extract up to about 30% from a bed of coffee grounds and no more. Not to say that you should try to extract that much. In fact, as is well documented, extraction happens in stages, with the most astringent compounds being last, so anything above, say, 25% will probably be totally overwhelming and, while not inedible, certainly bitterly unappetizing, if harmless, in the way Bitrex is.

Until recently the target extraction percentage was 18–22%. Anything below 18 is probably underextracted (and sour); and anything over 22% was thought to be overextracted, or just too much of one note (bitter) and not enough of the acids and sugar. Crude as this simple system was, this is still a reasonable range and most of the batch brews being served at coffee shops are probably within it. Most diner coffee is probably lower. When people say a coffee is “weak,” this is what they mean. The TDS is low; the extraction percentage is probably low, too (though this needn’t be the case, but we won’t get into that); so the coffee has a watery, or weak, mouthfeel and less of a coffee taste than more extracted brews. When people say a coffee is “strong,” they likely mean the opposite: high TDS or extraction or both. In plain terms, a weak cup does not include enough of the good stuff from the coffee bean; and a strong cup includes a lot of the good stuff (and maybe some of the bad).

“It is not unusual now to hear about 24%
extraction as if it were entirely normal.”

Recently, though, conversations about extraction have turned from measured (Are you within the range?) to radical (How high can you go?). It is not unusual now to hear about 24% as if it were entirely normal. Scott Rao, to use one recent example, using paper filters on top and underneath the coffee puck, was able to make espresso shots on a Decent Espresso machine that came in over 25%, and, admittedly, the results were less than tasty. Still, it is possible. Keep an eye out for new products and/or techniques that help us reach heretofore unplumbed depths of flavor beyond the old standards.

Just because we can reach above 25% extraction doesn’t mean we should, or at least doesn’t mean we should serve such coffees to customers. There is a difference between what we should try for ourselves (in the spirit of exploration) and what our customers want and probably expect. You might think you are to coffee what the Dadaists were to art, and who are we to say otherwise, but some gallery-goers just want to see a pretty picture.

The objective of using a VST is knowledge and repeatability. By tasting and measuring the extraction of filter coffees and espresso shots, we can better understand the brewing process overall and individual coffees in particular. We have seen many coffee shops, especially those that roast, have baristas record the extraction percentage for every batch brew. What often goes overlooked, though, at least from the outside, is the fact that the extraction number, while informative, is not necessarily indicative of the quality of the brew, or rather the flavors. We might find that we really like one coffee at 21% but prefer another coffee at 24%. This knowledge is instructive for brewing and, along with the tool for measuring (i.e., the VST refractometer), will help us repeat the desirable extractions and identify the undesirables. This is quality control. 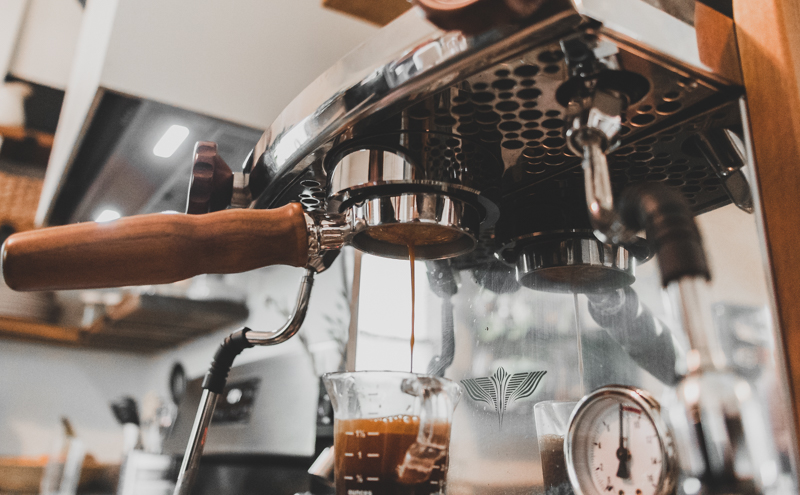 But the extraction percentage does not tell us if the coffee tastes good. That is up to your palate. The refractometer, while an incredible tool for measuring consistency and staying on recipes, cannot identify the flavors. One fault in the brewing process that takes a human to troubleshoot is unevenness. This happens when one region of the coffee bed extracts more or less than others. The TDS may be misleading because overextraction is high and underextraction is low and the average is in the middle, which, to the device, looks acceptable. But the cup will probably have a confusing sour, sweet, and bitter combination that only the taste buds, not technology, can read. Like all of Goldilocks’ options cemented into one. Is it good or is it bad? It is much easier to tell if a cup is all bad or all good; an uneven extraction is both and is usually neither as a result. To the novice taster, this might be acceptable. To the seasoned taster, Q-grader, and coffee shop owner, on the other hand, this is bad bad news. If people, i.e., customers, are going to pay for a cup of coffee, they should get a good cup of coffee. Otherwise it should be free. Right? There is nothing inherently wrong with an unevenly extracted cup of coffee—it will have caffeine and taste like coffee—but it is not ideal; it won’t be the most accurate expression of a crop’s flavors. We are paying more and more for bags of coffee—side note: this is a good thing—so it is okay to raise our expectations.

“It is much easier to tell if a cup is
all bad or all good; an uneven extraction
is both and is usually neither as a result.”

In the case of pour over brewing, the cause of an uneven extraction is fairly easy to identify: it is the barista. Maybe the pour was directed more to one area than another; or maybe the pour was too fast at first and too slow at last; but the pour was probably the problem. This is the risk with made-to-order single-dose coffee brews. We are fallible, sometimes distracted or hurried. Batch brewers are more consistent, but recent studies have challenged their shower screens and after-market adapters have become popular as a result. Ground Control, a new kind of batch brewer, uses immersion, not gravity percolation, and an agitator, to overcome the disadvantages of shower screens. Regardless of your opinion on the topic, evenness is a conversation worth pursuing.

Espresso is different but the same challenges apply. Unevenness is most often the result of channeling, a term for when water exploits a particular region or regions of the puck, over-extracting them, leaving other regions under-extracted. This is caused by poor puck preparation: uneven distribution, clumpy grounds, crooked tamping, etc.

The conversations in specialty coffee are probably different from the general conversations about coffee. This is a niche market. Some drinkers just want a good ol’ cup of coffee. We do, too, sometimes. But the point still remains: an evenly extracted coffee with a high (above 20%, let’s say) extraction is always more desirable than a low and/or uneven extraction. The same is true for a lot of culinary delights (remember that pizza with the gooey dough?). Why not aim for the best results in everything we do?