French Presses are nearly ubiquitous. Therefore, in this post we have decided to do the dirty work for you, bringing together our favorites and comparing them side by side. In the end, you truly can't go wrong with a French press from Espro, Hario, or Yield Design.

The french press is a staple in many homes. It’s often a gateway drug, the first way that people get into making coffee on their own. Although commonly referred to as a french press in the States, it is known by many other names as well, including cafetière, coffee plunger, coffee press, and press pot. But no matter what you call it, we are all pretty familiar with its beaker-like, cylindrical shape with a filtering plunger that fits snugly inside.

While most french presses produce a very similar cup of coffee, heavy bodied and aromatic, there are some different options out there that may make your experience more or less enjoyable: there are glass, metal, and ceramic options, as well as variations in sizes and filter types.

Not only is coffee an experience for your taste buds, it’s also an instrument for community. Whether or not you enjoy the coffee that comes from a french press, the reality is that it is easy to brew with and often capable of brewing a couple cups at one time, perfect for gathering around a table or even a campfire.

French presses are nearly ubiquitous, so we’ve sorted through and found some of our favorites. After dwindling them down, we’ve grouped each of them together by brand. We’ve analyzed and compared these french presses from Espro, Hario, and Yield Design, considering their construction, usability, heat retention, and brewing results, in hopes of better aiding you in making the right decision for your situation. 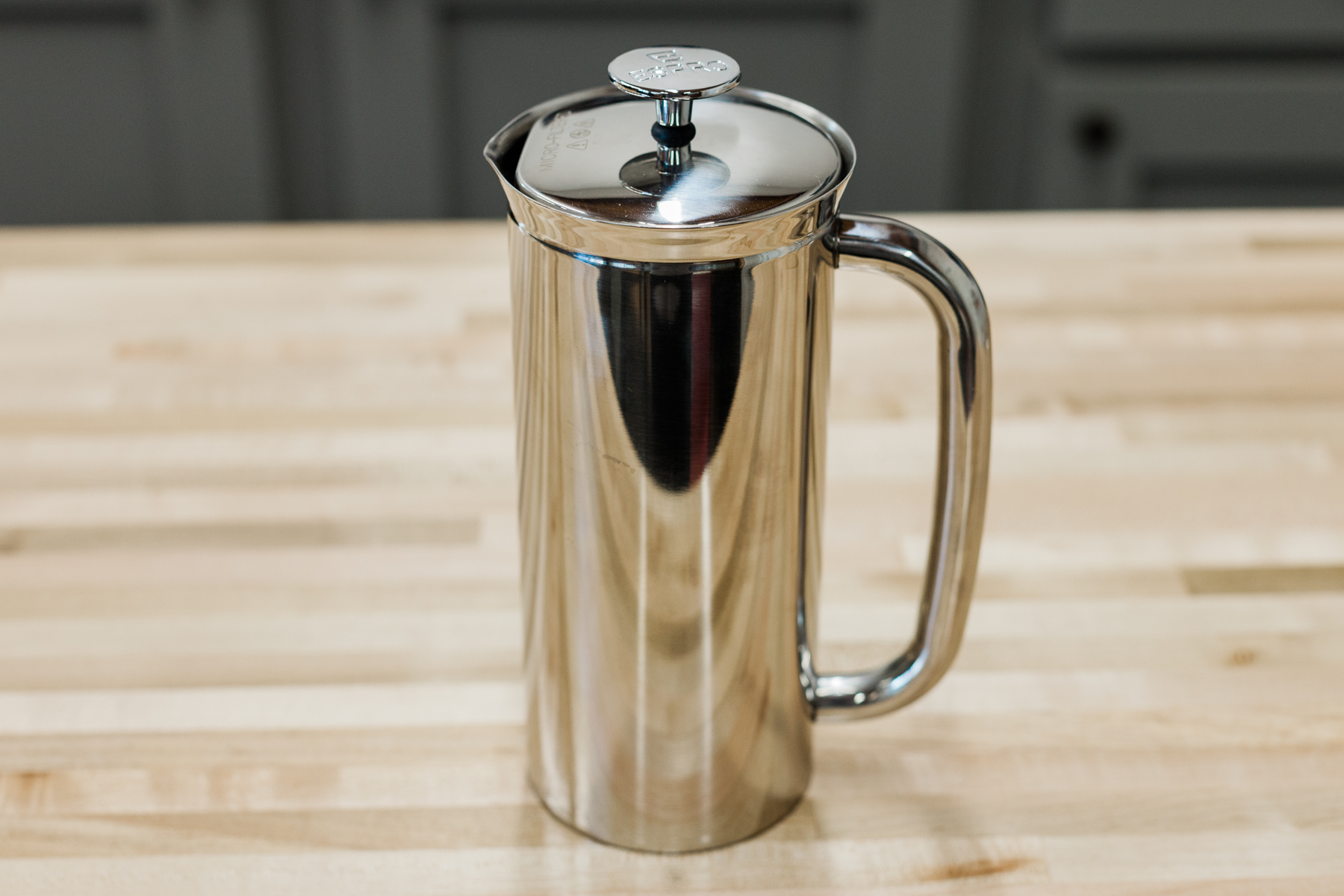 When it comes to the Espro Press, it is especially well made and easy to work with. The outside hardly even gets warm, and the cleaning process is much less involved than with traditional filtering systems. That being said, though, the plastic filters make it much more susceptible to holding on to that rancid, old coffee smell. So be sure to clean it well, and the sooner after brewing the better.

What gives Espro’s french presses a leg up over other brands is its double filter: rather than the traditional single-layer filter, Espro has implemented two fine steel mesh filters that are both considerably finer than most french presses. The result is a cup that has less silt and grit, pulling forward the coffee oils and flavors that the french press is known for. We blind tasted the Espro Press against a Hario single-walled french press and there was indeed a difference: the brew from the Espro Press was a little less silty and a tad sweeter, but there was not a huge difference. However, if you are wanting an even cleaner cup, Espro offers paper filters for their presses as well; they are uniquely designed to fit right in the middle of Espro’s two filters, resulting in a cup that is more comparable to pour over coffee.

When it comes to the difference between Espro’s three french presses, you can expect to only notice minor differences. Stainless steel is more resistant to damage and retains heat much longer than glass versions. In fact, out of all of the french presses in this comparison, the double-walled, stainless steel Espro Press retained heat the longest, losing only about 1 degree per minute. The result of better temperature regulation is that the extraction process is more balanced; this is because water temperature affects solubility.

Since 1921, Japanese company Hario has been producing high quality coffee and tea equipment. On top of their V60 brewer, Buono Kettle, and Coffee Siphon, Hario offers both single- and double-walled French presses. All of which are beautiful and functional, yet extremely well made. 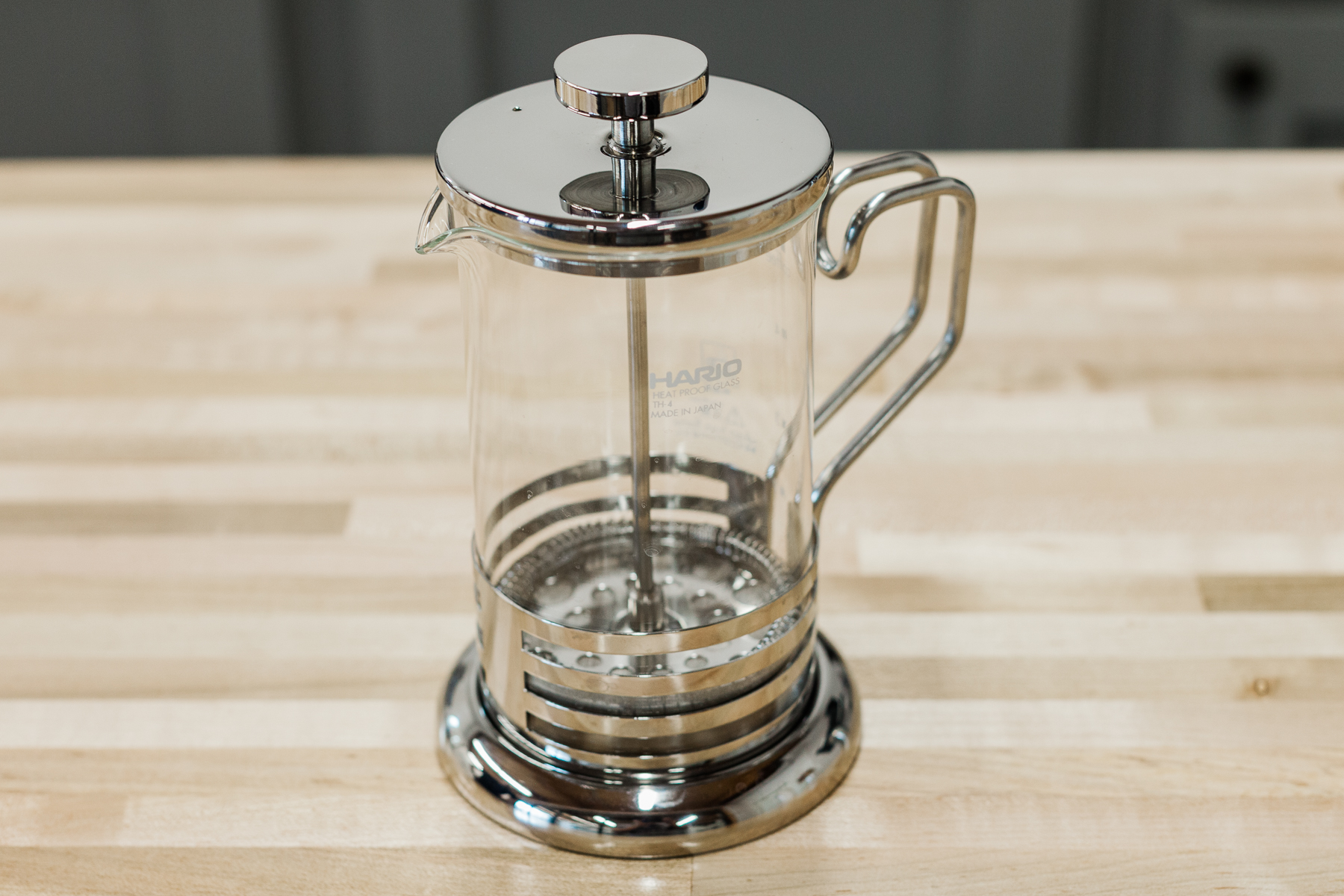 Having both metal and olive wood single-walled options, with practical capacities of either 300 or 600 ml, Hario offers an economical option as well as a more aesthetically pleasing option. Featuring Hario’s high quality heat-proof glass with a stainless steel filtering apparatus, the difference resides primarily in the construction of the handle and the lid, with one being entirely made of stainless steel and the other from beautiful olive wood (the olive wood components are not dishwasher safe).

As expected, due to the lack of insulation, the single-walled french presses became especially hot to the touch and lost more heat to the ambient air. After preheating, we started brewing with 205F water, using a Fellow Stagg EKG, and the single-walled french presses dropped about 20 degrees within the first 5 minutes and 65 degrees by 30 minutes. In the end, the effect that this has on your coffee depends on your recipe; with more drastic temperature changes, you may want to try recipes that implement stirring or longer brew times (like the James Hoffmann method). 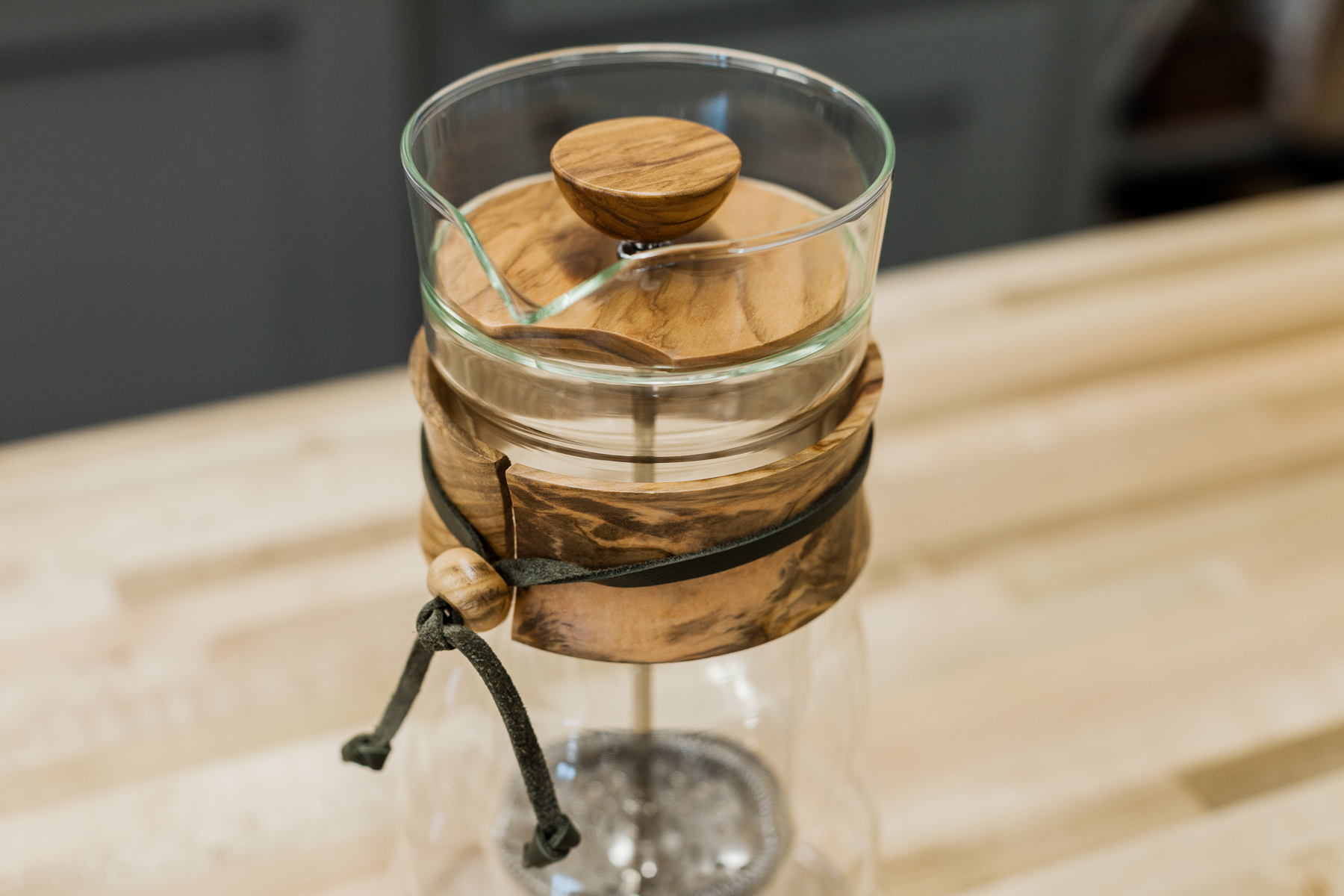 When it comes to being most beautifully designed, the 400 ml Hario Double-Walled Glass Coffee Press takes the cake. Not only does the internal glass wall look like it’s floating inside while the outer glass reminds one of the waves on a Buono kettle, it also features an elegant olive wood collar and lid, combining unique engineering with natural charm.

The double-walled version is not only fun to look at, it’s also easy to maintain. The two glass walls are actually vacuum sealed, so you don’t have to worry about them coming apart or getting a little coffee between them.

In fact, because they are vacuum sealed, you’ll see a lot less heat loss, giving you a more balanced extraction. After 5 minutes, it only lost about 10 degrees, and by 30 minutes about 40 degrees. As mentioned above, water temperature affects solubility, so an even slurry temperature will result in a better extracted coffee. 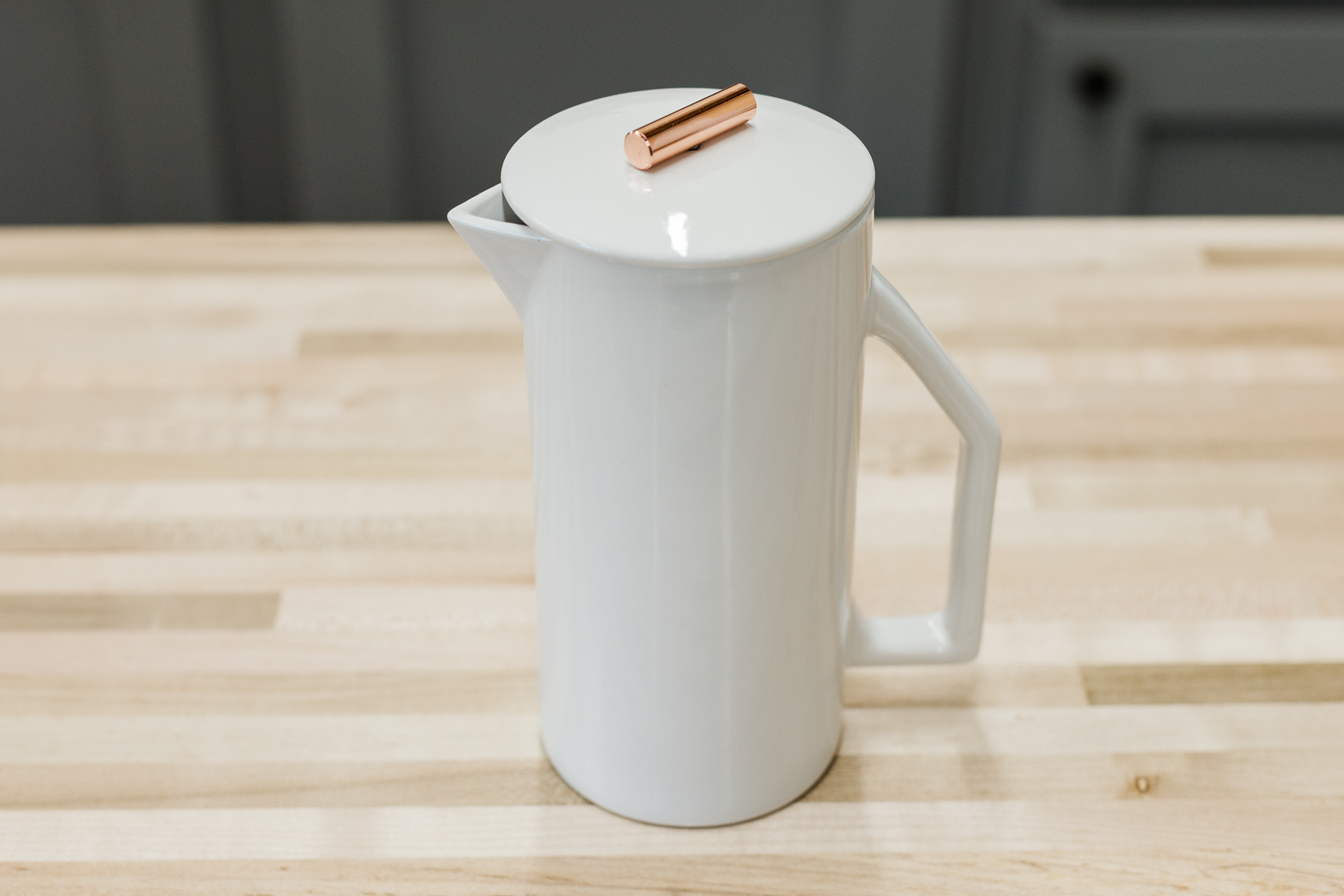 Fighting for the most attractive brewer, Yield Design offers an alluring, modern take on the traditional French press design. With six different options, three glass and three ceramic, you are sure to find one that’s a perfect match for your situation. Aside from the brewer’s primary material, the plunger and the overall shape are exactly the same, including the rocket fin-like pouring handle and the sharp-pointed spout. All models also include the same fine mesh-steel filter with an attractive copper pull handle.

When using the Yield Design french press, you’ll notice a couple of things. First, although the max capacity is said to be 850 ml, the practical capacity is closer to about 600 ml. Second, it gets super hot, just like all other single-walled french presses. Third, the spout dribbles if you decant slowly. Fourth and finally, it cleans really well and doesn’t hold any of that rancid coffee smell.

Although the Yield Design french presses are basically the same, the difference in material does slightly affect the brewing process. Although it’s not a huge difference, the ceramic Yield Design stayed about 5 degrees warmer than the glass version. This slight difference does affect optimum extraction time, extending the water’s ability to extract well. However, for this to be of benefit, be sure to preheat the brewer; otherwise, the ceramic will steal more heat than the glass one would have. 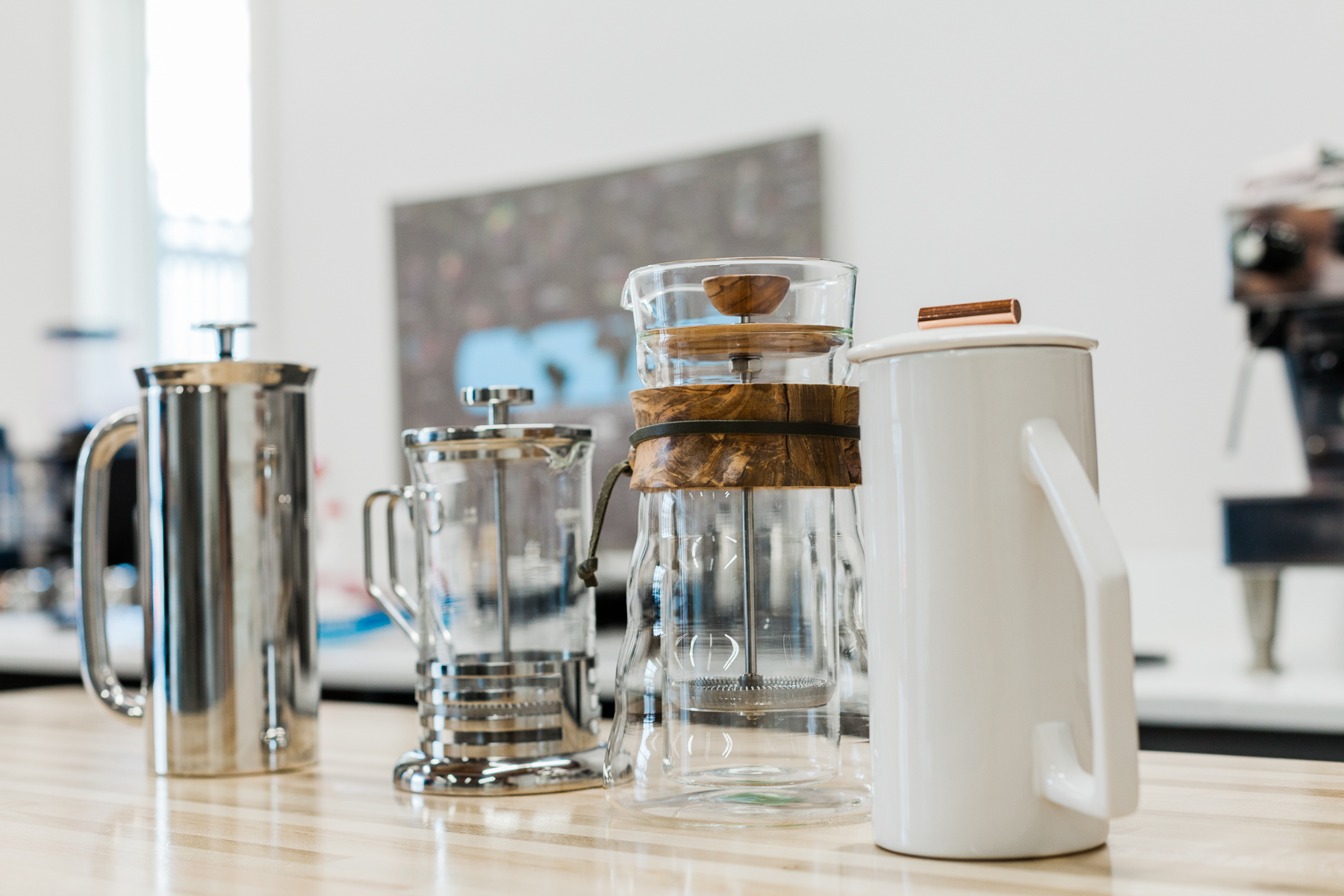 In the end, you really can’t go wrong with any of these french presses. Each have their pros and cons, but we are positive that you can find the best one for your situation. We love the heat retention of the double-walled options, as well as the manifest beauty of the Hario double-walled french press. The Espro Presses produce a slightly cleaner cup, and the Yield Design french presses have a number of different options to choose from. And although the single-walled french presses don’t retain heat as long, they are more budget friendly. So, it really comes down to what works best for you.

Chime in and let us know what your favorite french press is, or if you’ve nailed down a perfect recipe. We’d love to hear from you!