Looking for a quality commercial espresso machine that won't break the bank? Astoria's Gloria and Perla are both popular favorites that fit the bill. In this video, Ryan takes a look at each machine, compares the specs and features that make them unique, and talks through how to choose the best one for your situation.

- Hey y'all, Ryan from Prima Coffee Equipment here. Today we're going to be taking a look at two of Astoria's most popular machines, the Gloria and Perla. We're going to compare some of the specs and features of these machines to help you make a decision on which one is best for your cafe. Let's take a look at the Gloria first. So the first thing you're going to notice is all of these blue lights above each group. Those are volumetric profiles which you can program. There are six of them per group, which is a lot, maybe even more than you need. This also includes a semi-automatic bypass. So if you don't want to use a program, you just want to pull a quick shot, you can, just use it as a semi-automatic machine. 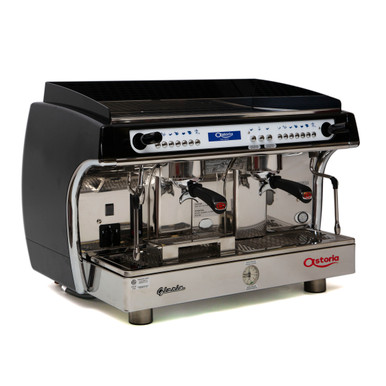 
Another awesome feature are these joystick steam wands on the left and right side. How they work is if you hold it down, that keeps the steam on. And if you want to do a quick purge, you can just tap it to the left. Another unique feature to the Gloria is raised group heads. So you can either fit 12-ounce or 16-ounce cups directly under those. Probably the most important feature about the Gloria is its wattage. It has a 4,400 watt heating element in a 10 and a half-liter boiler, in the two-group version that really dramatically lessens recovery time. That extra wattage is going to keep you going in mid- to high-volume cafes. So let's move on to the Perla. Down here you'll see it's a very nice burgundy red. This machine is also available in silver, they call it inox.

Another feature you'll notice right away, instead of those six programmable profiles, you get four with the Perla, which is probably not going to be a big deal to most people. This also does include a semi-automatic bypass if you choose to pull a shot that way. These do not have the raised group heads and they do not have the joystick operated steam wands. These are just basic turnstile, steam wands. Another feature with the Perla is that you can get it with just the semi-automatic operation. If you don't care to have the volumetrics, you want to save the money, you can have literally just one button on each side for a complete semi-automatic operation. Inside, you have a 4,000-watt boiler and that's really sufficient for low- to mid-volume cafes.

It doesn't have the ability to recover in a high-volume setting. So, keep that in mind. That's probably the most important thing that your espresso machine is able to keep up with you. So if you want to have that room to grow or if you know you're going to be busy, you're probably going to want to get that Gloria. If you know that you're not going to be serving a ton of coffee, maybe coffee is secondary to your business, maybe you're a bakery or a donut shop, then definitely consider the Perla. Thank you so much for watching. Check it out at primacoffee.com.