Designed for bar work, the Barista Hustle Tamper is light but balanced, durable, and features a base that's made to be both affordable and easy to replace. Its slim, smooth body is pleasant to hold and has just enough texture to avoid being slippery in wet hands, while its notable cutout near the base works to prevent dislodged or cracked pucks. It even comes with its own carrying case! Take a closer look at the Barista Hustle Tamper in this video, as Steve gives a complete overview.

Hey guys. This is Steve with Prima Coffee. Today we're going to take a look at the Barista Hustle Tamper. Not a whole lot to say here. It's a fairly basic tamper. It's got some neat features that make it a really nice commercial tool. For one, it's pretty cheap and inexpensive as far as tampers go. But, you'll also notice that, you know, unlike some other tampers, we have mostly one piece construction here. Often, you'll see, like, a wood handle with a big steel base on the bottom. Barista Hustle's kind of taken a different approach here where they've crafted the handle and much of the sort of piston as one piece. It's all aluminum, which is hard anodized, with this nice sort of matte black coating. 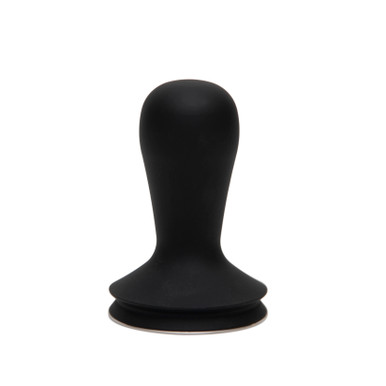 And then, the base itself is a piece of 304 stainless steel. The base diameter is 58.4 millimeters, so it's meant to be an oversized tamper for VST baskets, other precision baskets like that. The reason that this base, the actual tamping base is so thin and small is because they've kind of designed this as a replaceable part. So, you can see you can unscrew it here. Again, it's a pretty thin piece of stainless steel. The idea here being that, you know, tampers do get beat up on bar and if you just need to replace this one small piece of stainless steel, that's a fairly inexpensive part to replace. Whereas the larger, thicker bases on other tampers might be more expensive. You know, this part again, is thin, it's not a lot of material, and that bottom edge tends to be where you see the most kind of dings and marks and things. So, having that be the replaceable part rather than a larger steel piston, again helps you kind of keep those costs down when eventually do probably need to replace it.

Now, the handle itself again is one piece of milled aluminum. And what we have here down at the bottom, this is sort of double flange, which helps kind of prevent some suction. So, again as this is an oversized base at 58.4 millimeters, that can cause some suction on the puck, which could cause it to be dislodged. So, they've carved this channel to kind of help reduce that suction as you're pulling the tamper out after tamping, which really does seem to help prevent that dislodging effect. But overall, again it's a fairly simple tool. It's a tamper. It's nice and comfortable in my hands certainly. I think a lot of people will kind of agree. The texture is nice, so even if it gets wet, it has this kind of rough feeling texture, so it's not super slippery or anything. And again, because it's aluminum and steel, it can take a little bit of abuse here and there as it probably will on most coffee bars.

Tamping works just as pretty much any other flat bottom tamper would. Obviously, just press it into your basket and again, that phalange helps kind of prevent the sucking effect that might dislodge or crack the puck as you pull it out. You can see, we get a pretty good edge to edge tamp. This is a VST 20 gram basket. So, pretty solid tool. Again, you know, it's sort of a standard tamper with a couple of things rethought. Really nicely made quality obviously, like aluminum steel, pretty nice materials to have. It's got a decent heft. It's not too heavy, feels nice and balanced in the hands, so it's not something you're going to feel like is kind of off kilter or whatever all through your shift. So, really nicely crafted tool. That is the Barista Hustle Tamper. Thanks for watching.