The HeyCafe H1 all-purpose grinder is an all-in-one solution for the home barista or low-volume commercial operation. The H1 is equipped with a worm gear to adjust the grind from espresso all the way to Chemex and a digital display to provide a reference for the fineness or coarseness of the grind from .1 (finest) to 8 (coarsest), making it easy to repeat grind sizes. In this video Steve shows why the H1 is an impressive grinder for this price. 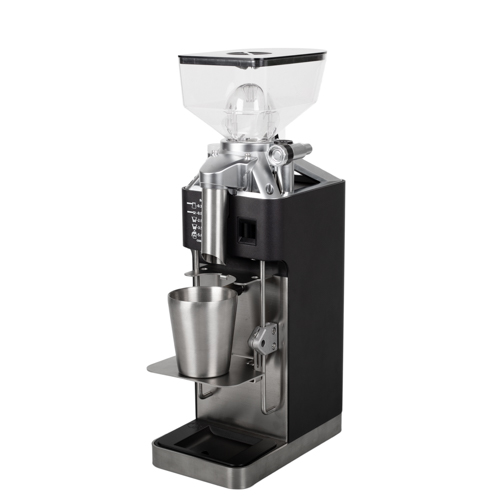 Steve with Prima Coffee, and today, we're going to take a look at the HeyCafe H1. The HeyCafe has 64-millimeter flat steel burrs, and it has a fast motor that can grind about 2 to 3 grams per second, which will get you your espresso shot around 8 to 10 seconds. The H1 is an all-purpose grinder, so you can grind from about 100 microns all the way up to about 900 microns. So that's going to be everything from your Turkish up through your French press. It's also a very small grinder. So you can see the footprint here, it's only about 5 inches across, 9 inches deep, and about 18 and a half inches high. And it only weighs about 17 pounds. The hopper here, it fits about 13 and a half ounces of coffee. Most bags are about 12 ounces these days, so it will fit your one bag of coffee, maybe a little less, of course, then, if you have a pound bag. It is made of plastic, both the lid and the body here. But it does have an open and a shut valve here, so you are able to change coffees or to close this up and take it off with coffee in it if you're just going to clean out the burr chamber. Also, on the bottom here, you can see these little magnets. And so, the grinder actually won't operate unless the hopper is on, and it's a safety feature, so you can't put your hands inside. You can see that it is one. The light is on here, and when we click the button, nothing happens. Put the hopper back on. Put it on correctly, like that. And now, it works. There are two ways to operate this grinder. You have a pulse button here on the top with that light, so when you push the button, it grinds, and when you let go, it stops. The same thing for the portafilter button down here, and we'll show you in a second how this works. But, you just put your portafilter in to that button, and when you pull the portafilter out, it'll stop grinding. So, there is no time grind, there is no grind-by-weight on this, this is a really affordable grinder. And by doing away with some of those extra features, it's able to come in at that price. Over here on this LED screen, all you're going to see is your grind settings. So, this is kind of like a disc-detection system. It gives you a number and that number is just a reference point, with 0.1 being the finest that you can go, and 8 being the coarsest that you can go. And all the little changes that you can make or that you can see are going to be by the tenth on this screen here. Now, even between those, even between, like, for instance, 1.7 and 1.8, which is one of the settings that we're finding for espresso, even between that 1.7 and 1.8, you can still move a little bit. So it does take a little bit of moving on this wheel, this is a worm gear. So, as you turn, you can see the number changes. You go to the left here, you're going to go finer, turn to the right and it's going to go coarser. And so, it is kind of a big move, about maybe half a revolution or a third of a revolution between each of those tenths. So you have your option here between the platform, where you can use the dosing cup that comes with the H1, if you're going to grind directly into this. So this is just if you're going to do a single dose your pour overs, or if you're just going to use it as a pour over grinder. Because, again, it is an all-purpose grinder. Then you're probably going to use this. If you want to use it, however, as a dedicated espresso grinder, you're probably going to want to use the portafilter fork. And to do that, you just take off this platform. So you just put it in at an angle, and also, lift it out at an angle. And you can see here, now we have this portafilter holder here or two forks that can clamp the portafilter. Now, in order to get this to fit your portafilter, you're just going to need a 3-millimeter hex, which we have here on a driver, but it also comes... Let's see. It comes with a couple of tools and that is one of them. Also, comes in here with a Phillips-head screwdriver, and a flat-head screwdriver, and a brush that you can use to clear out that grind chamber. But if you have a 3-millimeter hex around and a driver, this makes it much easier. But you'll see here on the side of the grinder, you have these two hex screws.

These are the ones that you're going to loosen, both on this side and on the other side, to move this platform up and down. So, this platform can move up and down, and this one is set. You can see that button is set, and that button is what you're going to use for your portafilter. So you need to move this part up and to clamp it on the bottom of your portafilters. And it actually does have quite a good hold, a lot of friction there. So it's not one of those that you see in a lot of grinders where when you unscrew it, it falls down to the bottom. It actually does have a lot of resistance on it, which is good for setting that grinder. So, if you move this all the way up, as you can see, it still doesn't fit in there right away. So, now what you need to do is move this other...so, loosen this other hex screw, and then you can move this part up and down as well. So, now that we have these loose, you can see you can kind of go up and down. Kind of see where this fits, probably right around in there. And we'll lock it up. Get the hopper back on here and show you kind of how this works, so you can hear it and also see how fast it is. We have 20 grams of coffee here, go ahead and dump it in. And we have it set on 4 and a half, which is about something you might use for a V60 depending on how big the V60 is. So, if we're gonna use the platform, there's a platform back on here, we can just set this underneath, and we can use this pulse button here. One thing you'll notice is that there is some popcorning. So if you're going to use it as a single-dose grinder, you are going to get that, and it's going to take an extra couple of seconds, probably have to turn it on and off to let those beans go down. But there's always a couple of beans that are doing that when you're single-dosing. We find that retention is really low on the H1 as well. It's around 0.2 grams. Now, the first time that you're dosing in on here, so if you clean this out, then you dose in, you're going to lose more, a little more than a gram. But after that, you're only going to lose, if any, about 0.2 grams. We can kind of show you, here's 20 grams of coffee, we have it back on that V60 setting. Go ahead and dump that in. We'll start it up. You can see that popcorning. No more coffee coming out there. There we go, 19.8. So, pretty close, pretty accurate to what it should be. This is an all-purpose grinder, but we find, as you go coarser and as you push yourself up into the French press, certainly, you're going to have a little bit of a powdery grind, so you're going to have some fines in there. It's not going to be as clean of a cup as a grinder that is built for a pour over brewing but it's still capable of doing it, and you still get good cups of coffee. So, even though you can use this in a low-volume commercial setting, the duty cycle is pretty low, as you can kind of just see by the size of it, so you're not going to want to run that motor for very long. If you run it for about a minute, you're going to want to let it rest for about 45 seconds, and so on. Which shouldn't be a problem, because you'll be pulling the shot, or you'll be making the coffee after you grind on this. But, definitely, don't overdo it because the motor is not built for it. Another note is these are 64-millimeter flat steel burrs, and you can fit the SSP burrs into here. But if you do choose to do that, it will void the warranty. So just keep that in mind.