There are few ways to feel more connected to the coffee you drink than manually pulling a shot of espresso. And when I say manually, I mean more than grinding the coffee yourself, locking in the portafilter, and flipping a switch - I mean literally, physically pulling a shot with your own strength. Lever espresso machines like my vintage La Pavoni Europiccola aren’t as fancy or even as convenient as their modern brethren, but there’s something a little extra romantic about becoming part of the extraction process as you exert yourself trying to hit just the right pressure and flow rate. In the video above, I talk a bit about what it’s like to own a machine such as the Europiccola, but here I’d like to discuss more about why I went that route in the first place and what I love about the process.

There are few ways to feel more connected to the coffee you drink than manually pulling a shot of espresso. And when I say manually, I mean more than grinding the coffee yourself, locking in the portafilter, and flipping a switch - I mean literally, physically pulling a shot with your own strength. Lever espresso machines like my vintage La Pavoni Europiccola aren’t as fancy or even as convenient as their modern brethren, but there’s something a little extra romantic about becoming part of the extraction process as you exert yourself trying to hit just the right pressure and flow rate. In the video above, I talk a bit about what it’s like to own a machine such as the Europiccola, but here I’d like to discuss more about why I went that route in the first place and what I love about the process. 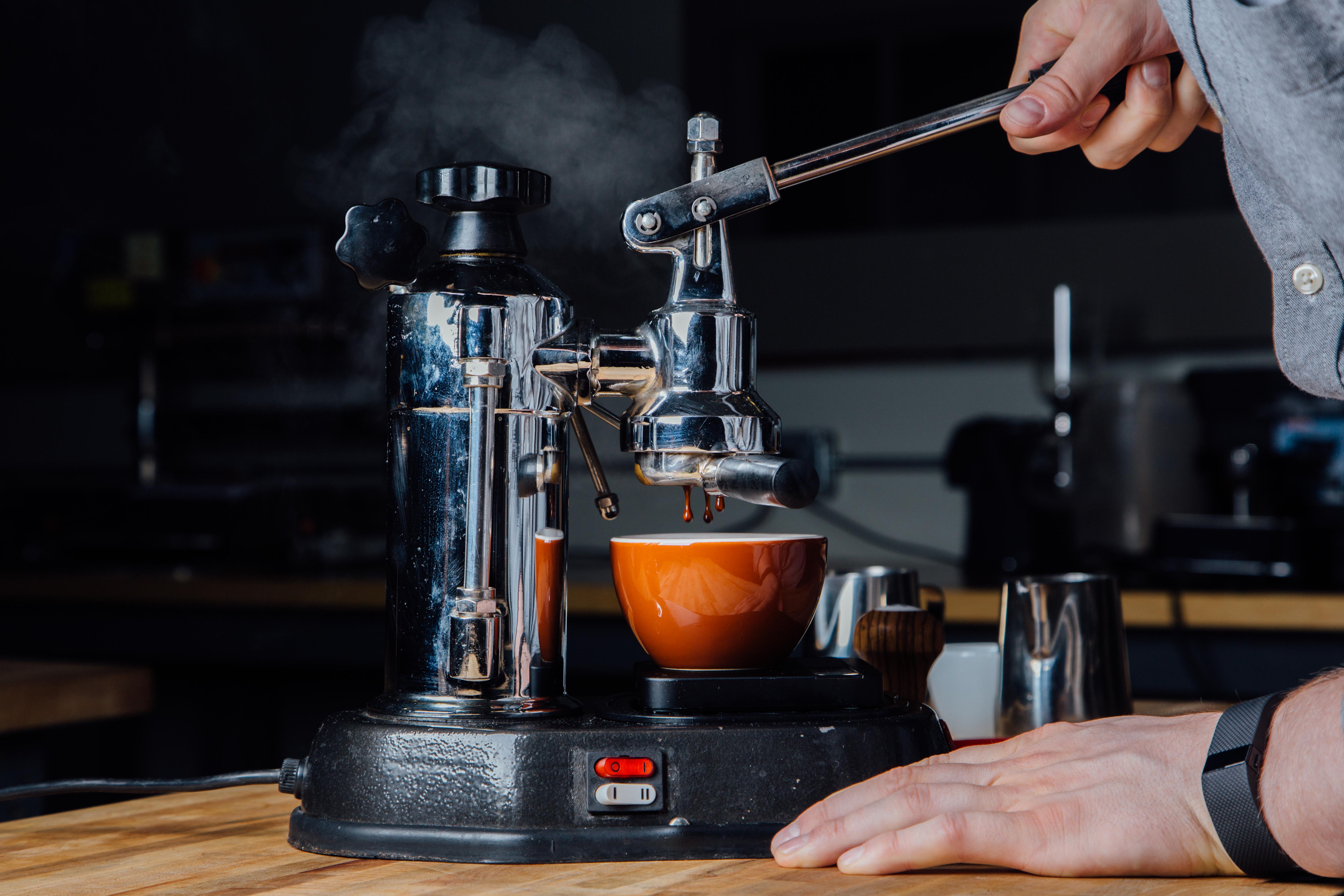 To get right to the heart of it, let’s talk about cost: I bought my La Pavoni six years ago because it was relatively cheap. I had found an Ebay listing for the machine that was ending soon with few bids, and I was able to secure it for just $250. To many just dipping their toe into the espresso world, that may seem somewhat expensive - and for me at the time, it was a considerable investment, even though I knew it was not a very high-end machine. But espresso machines soar into the thousands and tens of thousands of dollars, generally with notable improvements in technology or hardiness as you go up. Further, a brand new Europiccola today retails for almost four times what I paid, so I knew it was a steal if it was in good shape. My find is not that rare - because lever machines like mine are relatively simple and fairly well constructed, you can often find good deals on used machines in quite good shape. What I didn’t quite realize at the time was what exactly I was in for when bringing that machine home, and what it is exactly that makes the Europiccola and lever machines so special. 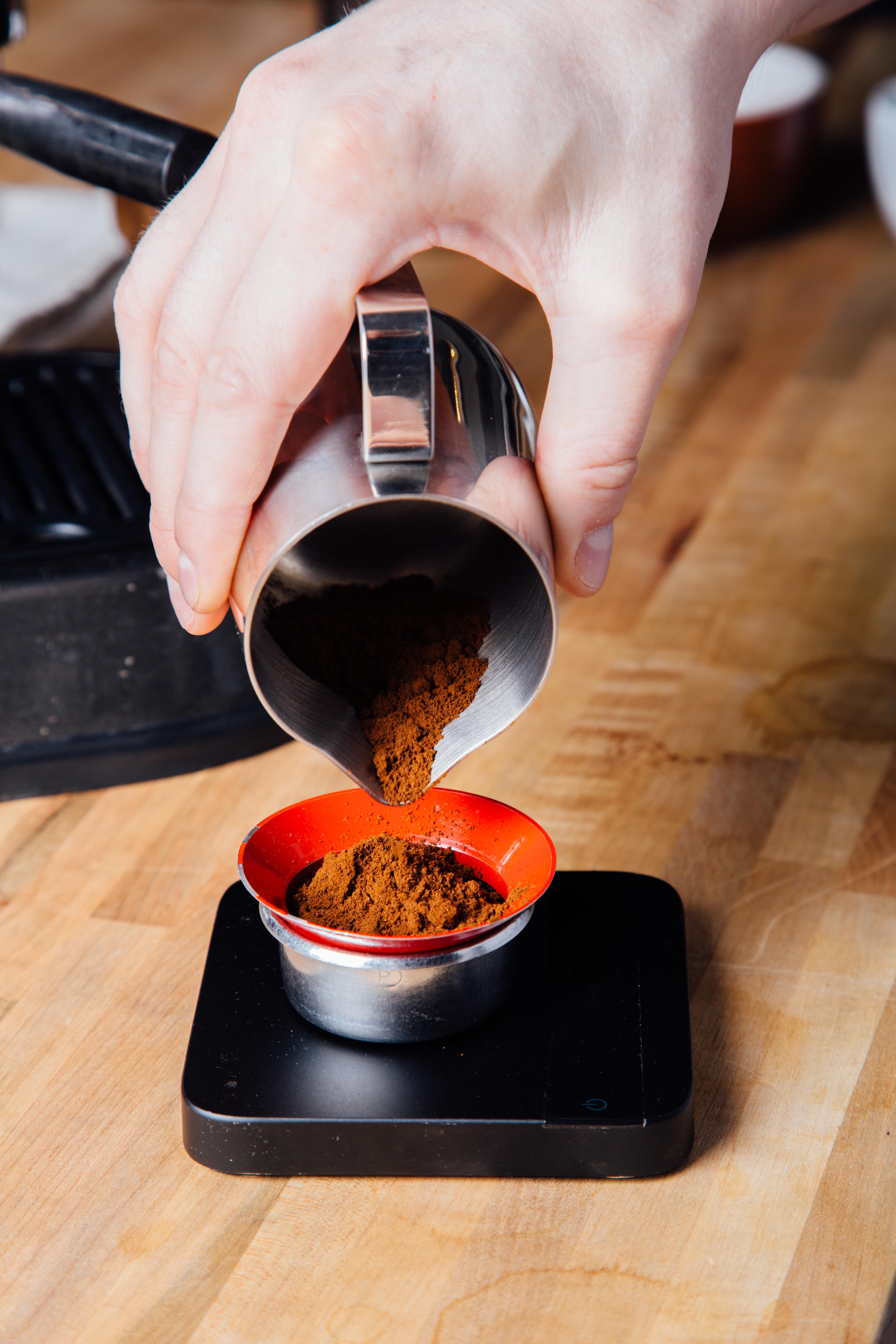 My La Pavoni is a 1977 model Europiccola. It has a roughly 900 mL brass boiler, two heating elements (a combined 1000 watts of heating power), a painted steel base with a plastic drip tray, and a 49 mm basket that holds maybe 16 grams of coffee on a good day. It came with a spouted portafilter that I immediately took to a local machine shop to get chopped for bottomless extractions. That sadly chipped some of the chrome off the brass, but I was more concerned with function than form. I also replaced the stock steam tip, a wide mushroom-shaped thing with three holes, with a 6 mm acorn nut through which I drilled a single 1/32” hole. With that initial work done, I was ready to start pulling shots.

My first shots were absolutely awful, and I immediately regretted the purchase. I had no confidence in my ability to pull a shot by hand, had no way to gauge how coarse or fine to grind the coffee, and I was a little upset that the basket held so little coffee compared to my previous machine (a Hamilton Beach machine outfitted with a PID temperature controller and Gaggia portafilter). I had read that there was a steep learning curve to using a lever machine like this, but I thought I might be able to skirt that curve by having had quite a bit of experience working with a troublesome, cheap machine like the Hamilton Beach. I was dead wrong. 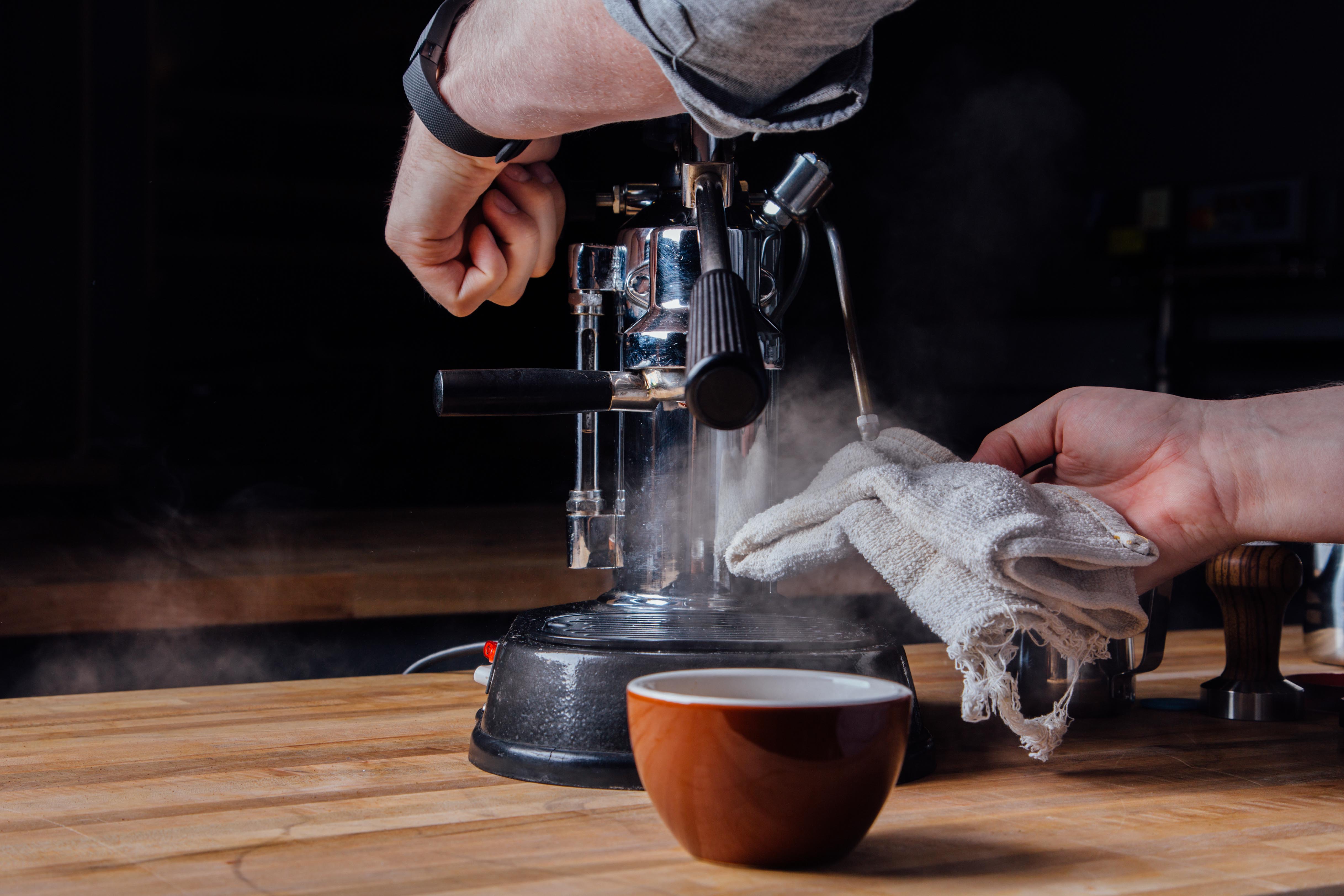 After a few weeks, and an unfortunate electrical accident that required repair (old wiring that should have been replaced a decade previously), I finally saw some success with my shots. Lever machines are quite sensitive to the usual aspect of coffee making - grind size, temperature, and pressure. I wasn’t ready for just how narrow the window could be to make a good shot of espresso, but after considerable trial, tasting, and repetition I began to pick up on the machine’s habits and how it responded to my input. Older Europiccolas like mine do not have many of the features that the newer ones do, and most notably they have no means of pressure or temperature regulation other than the safety release valve at the top of the machine. As you let the machine warm up, or pull shots in succession, the whole machine and especially the group head get hotter and hotter, to the point of ruining shots that would otherwise have been good with a lower temp. If you pull three shots in a row on a Europiccola with exactly the same brew ratio and time, all three will taste different because of the change in the overall temperature of the machine. As you might imagine, I wasted a lot of coffee while I was slowly figuring that out.

Despite the rough beginnings, there’s a reason I’ve held onto this machine for six years; when the shots are good, they are GOOD. I don’t mean to toot my own horn, but the very best espresso I’ve ever had came from this machine, and I’m sure that’s because I’ve taken the time to really get to know the machine. These days I can dial in new coffees and pull tasty shots with little trouble, and I enjoy the fact that I have the ability to pressure profile my shots just by leaning more or less on the lever during a pull. 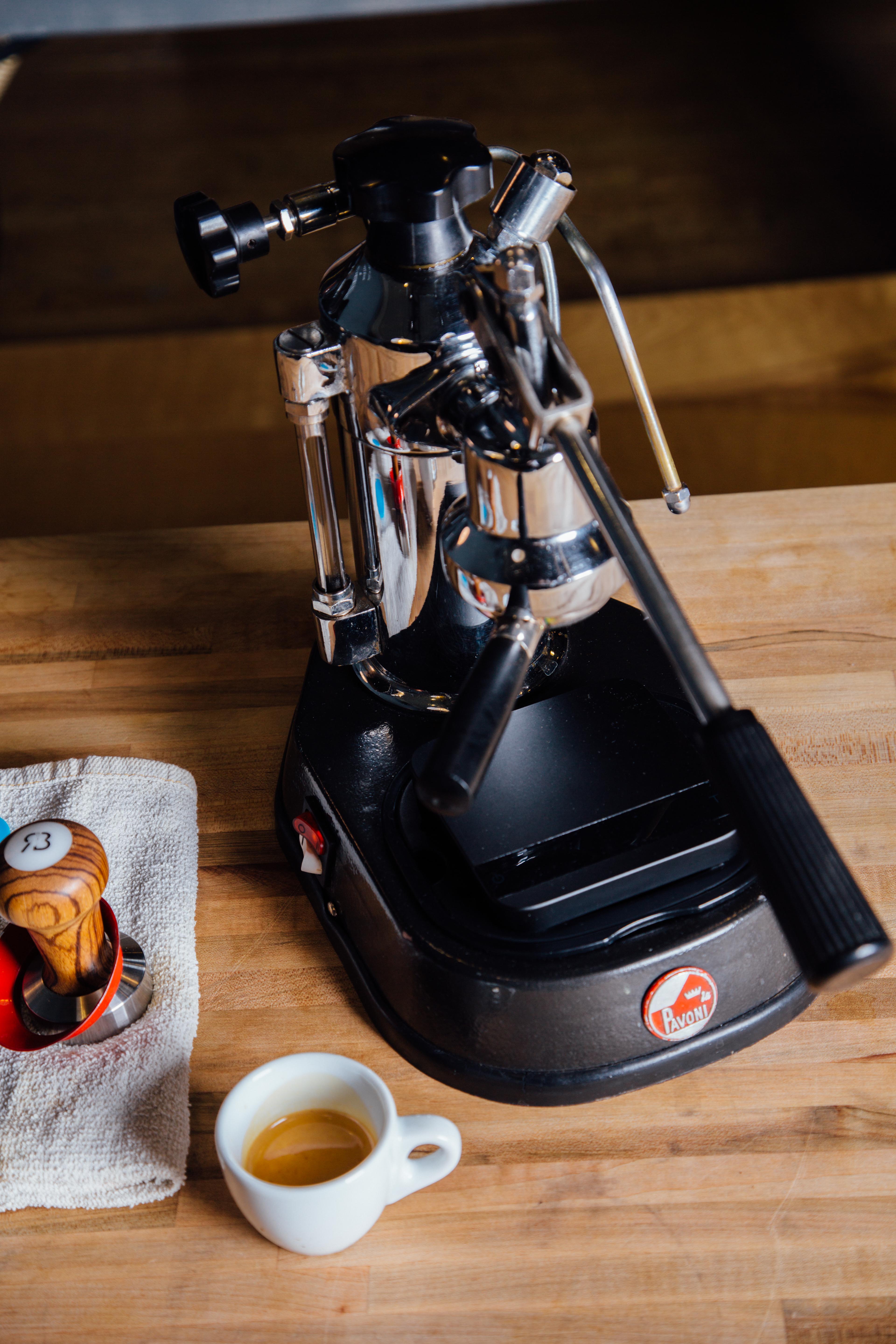 Now, there are absolutely some downsides to the machine that are worth mentioning despite my deep appreciation for it. As it has no pump or reservoir, you are limited to how many drinks you can make in a session - once you’ve run out of water, you have to shut the whole machine down, depressurize, then refill and reheat. It is not a machine you’d want to rely on for entertaining more than one guest. As I mentioned before as well, there’s a tendency to overheat, and while it can be countered in part by wrapping the metal parts in a cool damp cloth, this is not a precise process and there’s no good way to accurately manage temperature in the machine. It also lacks the convenience of a three-way valve, which is probably my main frustration even today. A three-way valve, or solenoid, shunts off the residual pressure after pulling a shot, forcing compressed air and water from off the top of the puck and into a drain tube. Without one, you cannot remove the portafilter immediately after pulling a shot, lest you risk the dreaded “portafilter sneeze” and spray grounds and murky coffee water all over yourself and your kitchen. I’ve suffered more than a few sneezes with this machine, and I can say for sure they’re more than a little inconvenient when they happen.

As for positives: they are many, and they are so very exciting. Pressure profiling your shots on a machine that cost under $500 is almost a fairy tale prospect for home espresso. Higher end machines that promise the same cost ten times that or more. And with a bit of practice, a good grinder, and a general aptitude for espresso, you can pull shots to rival the best cafes - and I promise that is not an overstatement. The Europiccola is also built like a tank, and I’m only slightly kidding when I say mine will outlive me. There is very little to go wrong in this machine, and what parts need replacing or repair are easily available and easy to work on. I’ve replaced all the seals in my machine twice since I’ve had it, I’ve kept everything lubricated properly, and I don’t even have to wonder when to descale as I can simply look inside the boiler and see if there’s any buildup. I think I can reasonably say that a Europiccola treated right could last a hundred years, they are heirloom quality machines that really will stand the test of time.

But perhaps most important to me is the romance I began this post with - the idea that you are personally and physically connected to the process of pulling your shot. Not only have you ground the coffee, prepped and tamped your basket, but you - your body - is the source of the pressure extracting the espresso. You feel the strain in your arm and shoulder as you press down and watch the rich coffee drip into the cup. The experience hits all your senses at once, and the coffee just seems that much more rewarding when it’s finished. It’s probably something you need to try for yourself to really understand, but it’s something I’ve come to deeply appreciate about this machine. Even if I see myself upgrading to a more high-end machine down the line, something with electronics and a pump, I can’t see myself letting go of this Europiccola. I feel that, in the six years I’ve owned so far, it’s become as much a part of me as it has become a part of my morning routine. 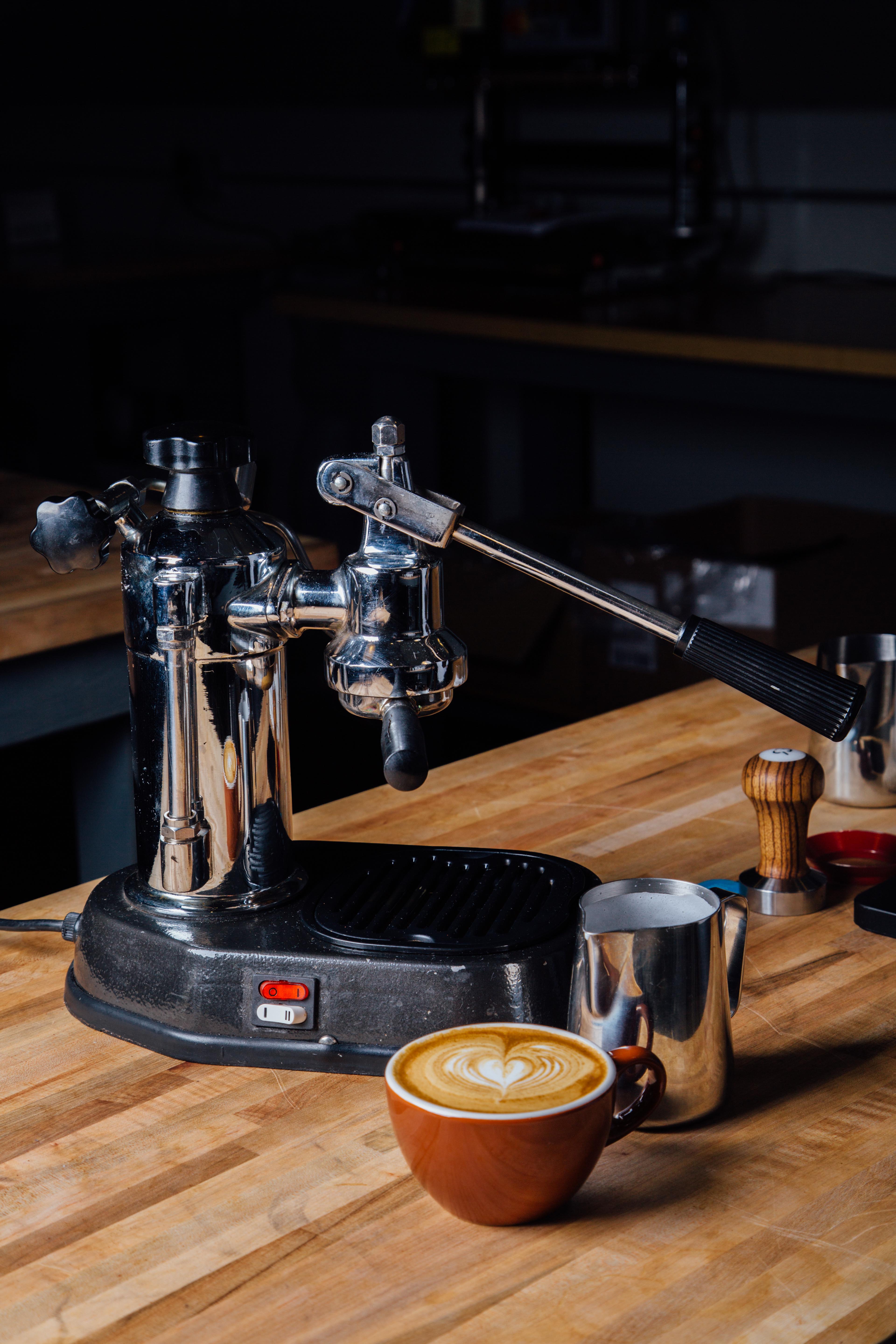