The Mahlkönig E65S GBW, or grind by weight, is built on the same chassis as the E65S. The GBW, however, grinds by weight, not just by time, using a load cell to weigh the dose in real time and a sophisticated algorithm to stop the fluffy espresso grounds within a tenth of a gram. What's more, the GBW is the fastest weigh and dose grinder on the market. It weighs the portafilter and doses the programmed dose in 4.5 to 5 seconds, making it a great addition to the bar of a high-volume café, as Ryan discusses in this video. 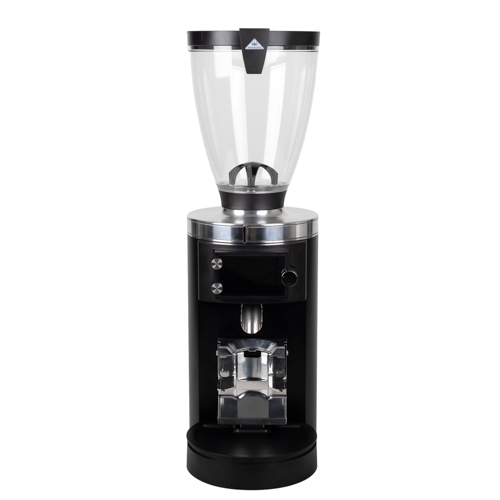 Ryan from Prima, and today, we're looking at the Mahlkonig E65S Grind-by-Weight. Built on the foundation of Mahlkonig's flagship espresso grinder, the E65S, the E65S GbW introduces a fresh approach to traditional espresso dosing technology with the integration of a load cell into the portafilter port. Unlike its predecessor, the GbW doesn't grind by time. Instead, it grinds by weight and measures that output of grounds in real time as they fall into the portafilter. It's using an algorithm as it grinds to determine exactly when to stop grinding in order to meet a precise programmed weight within a margin of around one-tenth of a gram. So, if you're currently using a scale to measure your grinder's output, the GbW is designed as a way to streamline that workflow and add an extra measure of precision to the dosing process in the cafe. So, let's get up close and take a look at some of the external features. So, up top, just like the E65S, this has a 2.6-pound hopper. The lid has a handy clip if you want to display a sign for the coffee you're currently brewing. Below that is a stepless adjustment, and on the back is a lock if you want to keep that in place. This has a really handy, removeable chute for really easy cleaning. And behind that is an adjustment for the angle of that spout, so you can accommodate different portafilters. This portafilter fork is adjustable, just like any other Mahlkonig portafilter fork. So, you just need a flathead screwdriver to basically move this up and down. And then this whole fork is attached to a load cell, which you can see underneath the grounds tray and the load cell cover. So, that's the inner workings of the scale itself. Inside of the E65S GbW is a 65-millimeter burr set that operates at around 4 to 5 grams per second. And there's also an internal cooling fan to draw heat away from the motor during longer grinding sessions.

This is a three-and-a-half-inch display, which is really bright. It might be kind of hard to tell from the video, but it's actually huge. From this screen, you have access to three different doses as well as a portafilter detection mode, which we'll get into in just a moment. To change the output weight, all you need to do is press the pencil and then adjust the weight in increments of one-tenth of a gram and hit the checkmark. It really couldn't be much easier. If you want to dose manually or add a little bit of grounds to your portafilter, you can hit this pulse button to add just tiny amounts at a time. From the top of the screen, you'll see an approximate current distance. That's this number right here, between the two burr sets, and that represents your grind setting. That number can be saved when you're editing a recipe so that any time the collars move back and forth on the home screen, it'll actually direct the user back to that grind setting that you had set. Finally, portafilter detection mode, this is a really interesting feature that Mahlkonig built in that basically works to store the weight of a given portafilter and allows it to be assigned to a particular dose. So, for example, if you want to up-dose for a particular recipe, designate a portafilter to that recipe, and then assign it to the desired dose within the menu. And when you place each portafilter on the fork, the machine recognizes instantly which portafilter you're using and then automatically doses the respective amount of grounds. A little deeper into the menu, if you double-click the jog dial, you have access to more recipes, up to six from this screen. Each of those is editable by weight, or even by time if, for some reason, the load cell ever fails. And you can also assign specific portafilters from this screen. That's the E65S GbW. This is a great grinder to consider if you're a low-to-mid-volume cafe and you're looking to add that extra measure of precision to the dosing process. A shot cycle will last about four-and-a-half to five seconds in total. So, if you do want something faster, like in the three-to-four-second range, the Mahlkonig E80 Supreme may be a better choice for your cafe.