The Pratic Avant Xtra is an affordable heat-exchange espresso machine with enough juice to power mid- to high-volume cafes and a few touches—raised group-heads, down-lights, and foldable demitasse trays—to streamline any barista's workflow. The PA is available in one, two, or three groups, and in automatic or semi-automatic (SAE) brewing models. In this video, Ryan shows us around the SAE model, ending with a demonstration of its volumetric function. 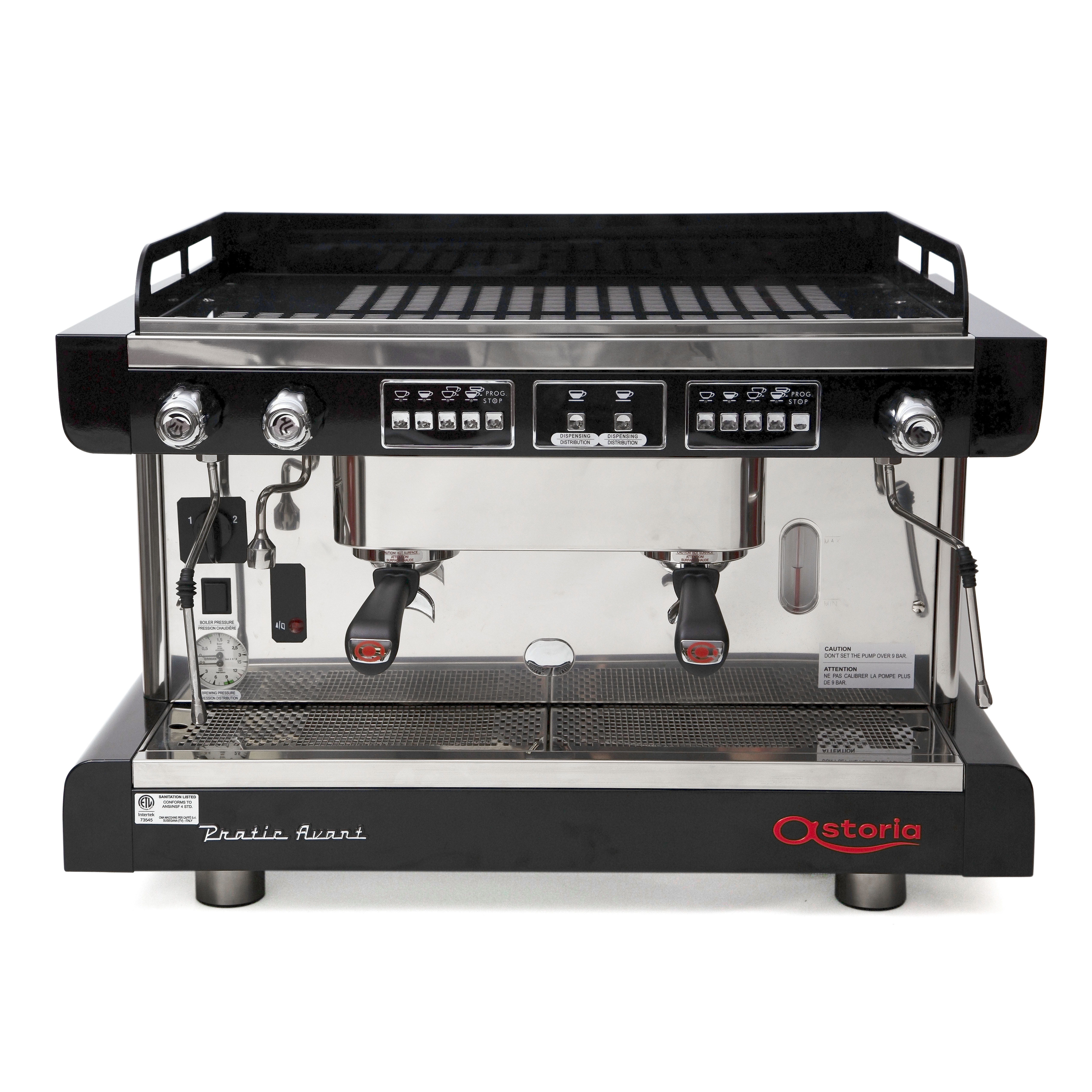 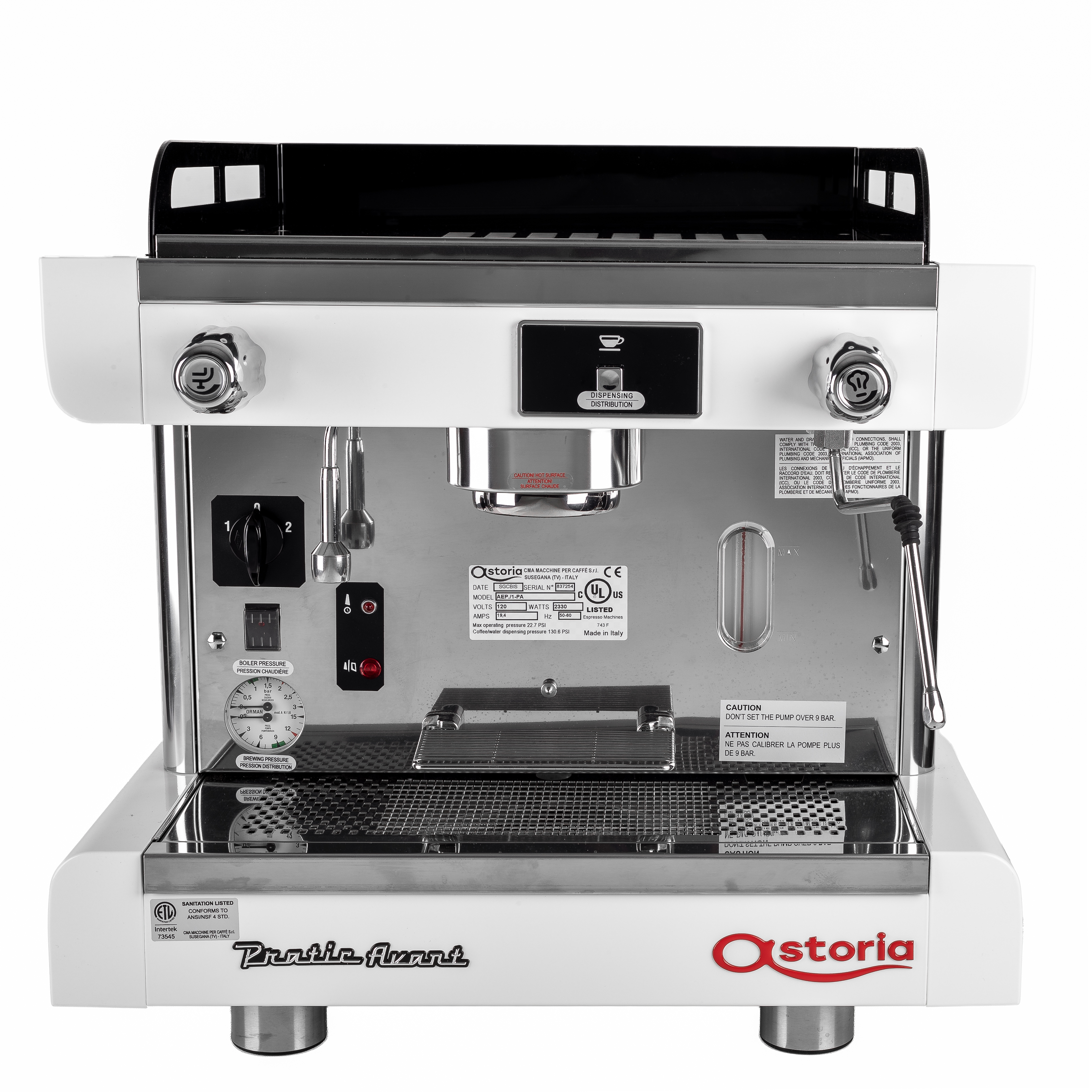 Hey, all, Ryan from Prima here. If you're looking for an economical espresso machine with enough power to meet the demand of a busy cafe or restaurant, the Pratic Avant Xtra from Astoria might be the machine for you. This is a minimalistic workhorse built for mid to high volume cafes. Let's take a closer look. So the Pratic Avant Xtra features what we call heat exchange operation. That means there is a single boiler heated past boiling temperature for steam, and there is a copper coil that runs through it that exchanges heat from that boiler into cold water to get that water up to brewing temperature, which is around 200 to 202 degrees. That's different than a dual boiler machine that would have independent control over coffee temperature and steam pressure in different boilers. That's part of the simplicity and minimalism that I mentioned in this machine, and it is a big factor in the lower cost as well. The Pratic Avant comes in a single group, a 2 group, or a 3 group size. And the operation can either be volume metric or semiautomatic. With a volume metric operation, there is a flow meter in each group head that measures the amount of water that enters the group, and four buttons so you can program up to four volumes per group. So you can have a single shot, a double shot, a single origin, maybe a decaf as well, all that at a touch of a button. Press the button once. Walk away. The machine will finish it on its own. There's also a semiautomatic operation, which has just one single button, on and off, it will run continually until you press that button again. So there's even more simplicity there if you want.

When we're talking about the Vario as a brew grinder, you can upgrade to stainless steel flat burrs and that's kind of what we've done here. So the price is pretty different on these. You're going to pay about $524 for the Vario, and $299 for the Ode. So the difference, or the reason for that difference, I guess, is that the Vario over here has just more features and more options than does the Ode. The big one over here is going to be your grind by time. So you can program your grind by time down to the 10th of a second on the Vario here, and it has three programming buttons. So all you need to do to program that is to hold the button down. And then you can use the up and down arrow to choose the seconds that you want, hold the button down again and that'll program that button for the time that you want. And that paired with this really large hopper, so this is a 230-gram hopper, it makes this a multi-dose grinder. So basically, you can dump your bag of coffee here into the hopper. And then if you know it takes 12 seconds to grind your 20 grams of coffee for your pour over, then you come into the morning and just choose your button and hit start and it'll dose that out.

The Pratic Avant features a 4400-watt heating element in the 2 group and a 2200-watt heating element in the single group. And a 9-liter capacity in this boiler and a 5.2-liter capacity in this boiler. In terms of wattage per liter, that is quite a lot. So this machine is built for mid to high volume situations where you're pulling shots and you're steaming milk constantly. These 2 steaming wands and 2 group heads, or 3 group heads if you want, allow 2 baristas to work seamlessly, side by side, to, like, really pump drinks out on this machine. The Pratic Avant features raised group heads which are here to accommodate 16 to 20-ounce cups, so you don't have to brew directly into a shot glass, if you want, you can skip that step. But it does have foldable trays that you can put a shot glass or an espresso cup on, and it elevates them to a point where it won't splash as it exits the portafilter. The Pratic Avant also features very bright barista downlights, which just helps you see everything that you're doing. I think this is a really helpful feature that should be included on every espresso machine, and we're really excited to see it in the Pratic Avant. The Pratic Avant includes turnstile steam wands. Sometimes, you'll see levers or buttons. But these feature turnstile steam wands, it's very responsive and have a really nice movement to them. I will mention that with this hot water wand, on this side over here, it does draw water directly from the steam boiler which will deplete the pressure very quickly because it's a lot of water exiting at once.

So another thing you're paying for with the Vario is the grind range. You have 230 grind adjustments that you can make here for the grind size. And on the Ode you only have 31. The Vario is probably built that way because it has these three programmable buttons. And like I said before, it comes with ceramic burrs, which are made for espresso. So all of those adjustments really make a lot of sense when you're talking about espresso. When you're talking about brew coffee, it doesn't matter as much, except you still can really dial in your brewed coffee as well more so here than you can over here. Another thing about these burrs is that you can go a little finer than you can over here in the Ode and then it's just a little finer, but you're probably not going to have trouble getting whatever you're doing for aeropress on the Vario and like I said, you might not be able to go as fine as you want to go here with the Ode.

So a lot of people are probably wondering and waiting for me to get to the grind quality, which is the big question between these two burr sets here. How do they compare? Well, like I said, the Vario can go a little finer, and they both can go, you know, about the same coarseness, but you can calibrate this one depending on what your needs are. And the grind quality to the naked eye is pretty similar. And in our Kruve test, we found that there is a little difference. The Ode here has a tighter grind distribution. And that basically means if you want to grind for your V60, you're going to get more V60-sized grinds with the Ode than you're going to get with the Vario. The difference is really slight, but the Vario does produce more on the coarser and more on the finer, so it is not as tight. You're going to get more of that here. So theoretically, what that's going to mean is you're probably going to get more even extraction with the Ode than you are in the Vario. And again, that's very minimal. So even extraction is small, the tastes of the cups we made on both of these was very similar. And when we did a taste test, it was kind of difficult to tell the difference between the two.

So you don't want to use this machine necessarily for Americanos and tea, maybe occasionally, but those are really going to impact the recovery time of the temperature and pressure. So if you need to be brewing or pulling out water for Americanos or tea, you probably want to consider an external water source or a different machine that has a cool water mixing valve, which blends cold water in, so you're not taking as much hot water from the steam boiler. So I've preprogrammed my volume metrics for a double shot, and I'll just go ahead and give you an idea of what the workflow looks like. ♪ [music] ♪ So I've preprogrammed my first preset for about 40 milliliters out. And all I have to do is press that button one time, and that flow meter is going to sense when 40 milliliters has passed into the group, and then it will automatically shut off. This allows the barista to move around, to do other things like steam milk, take another order, clean something, and not have to worry about coming back to the machine to turn the shot off. So that is the Pratic Avant Xtra from Astoria. If you're looking for a simple and highly dependable machine for your busy cafe or restaurant, we think you should put the Pratic Avant Xtra on your list.