The Brewista Smart Scale II features six programs, precise weighing (to the tenth of a gram), water resistance, and a compact frame, making it a perfect scale for drip trays. In this overview, Steve explains the qualities of this upgrade from the Smart Scale I and then walks through each of the six programming modes. 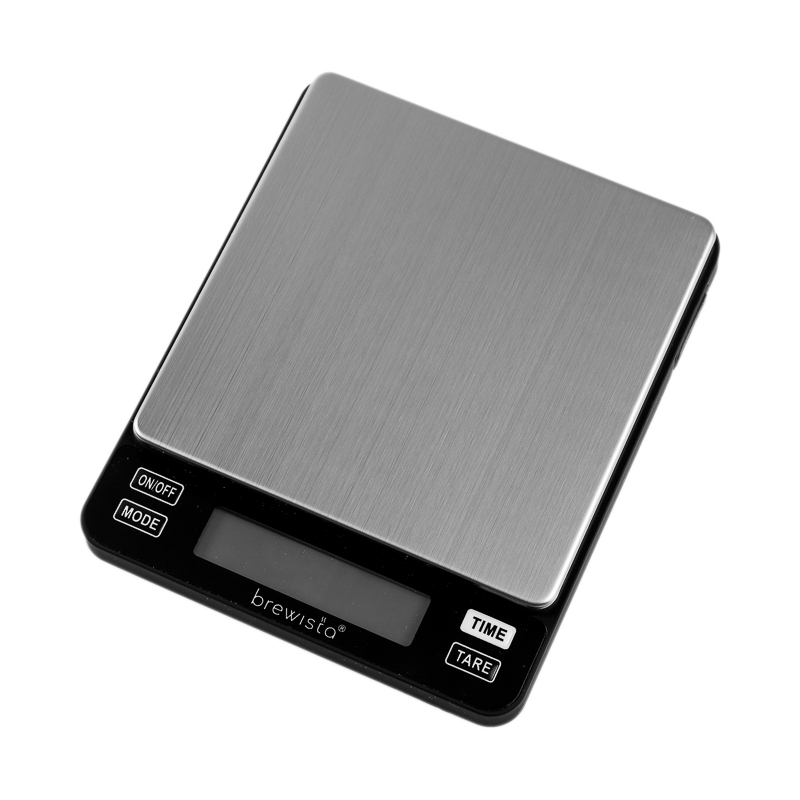 Hi, I'm Steve at Prima Coffee, and today we're going to talk about the Brewista Smart Scale II. So this scale is mainly an espresso scale. It has five espresso specific functions. It is the perfect compact size to fit on drip trays, and it is also water resistant. But it has not completely ignored brewing because it has a sixth mode that is specific to pour-over. So like I said, it is water resistant. So Brewista is very clear about this. It is not waterproof, so you should not wash it under running water or run it under running water on the espresso machine. You can however spill espresso on here, you can spill water. It can work on the damp environment of a drip tray. And if any water does happen to get back into the areas where it shouldn't, the scale will read unstable which is U-N-S-T. And that'll tell you that water's gotten in there, and you actually need to wait for it to dry before you can use the scale. Now, if it says U-N-S-T when it has not gotten wet, that just means that the surface is unstable, and you will need to find a stable surface to use the scale. The other error message you may receive is E-E-E-E, and that means that you've maxed out the load. So this is a scale that can hold 2,000 grams which is about 70 ounces. So you can do a lot of pour-over including Chemex brewing with this. It also has a calibration function. So you can get a 500-gram weight and calibrate this, so that it is back to where it should be if, in any case, you see that it starts to waiver a little bit. It does not come with a 500-gram weight. However, you just need to find one, and then you can run through very easily to that calibration function. The Smart Scale II uses a rechargeable lithium battery. And it just takes a micro-USB cable. And it does not come with that cable, but Brewista kind of assumes that all of us have a bunch of those laying around, which you probably do. The door to the port is a silicone cover just to make sure that no water gets behind there. The battery, when fully charged, will show in the battery indicator four bars, and as it gets downs to one, you're going to need to charge it.

However, Brewista does say that you can overcharge this and do damage to the battery, so do make sure that you're not charging it overnight or for long periods of time without paying attention to how far, how close that is to being fully charged. The scale also comes with this silicone pad. And one of the functions of this is to make it a little more water resistant, to keep water off of the scale. But the other function of this is that scales do tend to lose a little bit of their accuracy, just a tiny bit when there are large temperature fluctuations, and when it's on the drip tray, there probably are going to be some extreme temperatures at times when you're not making coffee. So it's going to go back and forth. So you're probably going to want to use this when you're using it for espresso. The scale also comes with an auto-off function to help save that battery. Factory set, after 180 seconds, the scale will go ahead and turn off. You can toggle that to 180, 120, 60, or completely turn that off if you're going to be using it all day such as at a cafe. So the smart in the Smart Scale II does not mean that it has Bluetooth capabilities, or that there is an app that it connects to. What it actually means is that there are five functions for espresso, and one function for brewing that are really smart, and that have thought about what the Brewista is going to do in terms of pushing buttons, and it kinds of does those for you. So let me walk you through what those are. The first mode is the completely manual mode, and this just means you're going to have to hit the time. You're going to have to tare it yourself. The second mode is the first auto mode. It auto-tares and auto times. When you put the demitasse onto the scale, it immediately auto-tares, and then it starts the time right after it tares to zero. Mode 3 is an auto-tare function, but if you want to use the time, it's going to be manual. Mode 4 is also an auto-tare, but it does away with the timer altogether. It'll still show the timer on the display, but you won't be able to hit the button to actually turn that on. Mode 5 is basically like Mode 2, so it's for espresso. And when you put the demitasse on, it will auto-tare, but it won't start the time until the first drop of espresso hits the cup.

The last function on here is for brewing specifically. What happens is when you put your brew vessel on there, it will go ahead and tare down to zero. And then you can put your coffee in, and you can adjust the dose. And then you'll have to manually hit that second tare to put it down to zero. And then when you start to pour in, when the first liquid hits, it will start the timer. And one other cool note, specific to brewing, is that it can fit a Chemex on here unlike some other small scales, and you can still read the display, and you can still see the buttons and hit the buttons that you need to hit. So the display and the buttons, they protrude a little far out from the platform, and it allows you to do that. There are a couple of notes that you probably want to know about, and one is sensitivity. So it actually takes about 1 gram to 1 and a 1/2 grams before it will show a reading on the display. Also when you have it on function or Mode 2 for espresso, when you put the demitasse on here and it auto-tares, there are about two to three seconds before the timer actually starts. So it is an auto timer but there is a little delay. So you're going to want to calibrate that with hitting the button on the espresso machine, so that the time on here is exact and accurate to the actual shot itself. One other thing about here is that as it cycles through the weight when espresso is being added into the demitasse, it can be a little fast for you to catch what it's saying. So it does take some getting used to there as well. But once you kind of get the hang of it, you should be able to stop right around or on point for the desired volume. So that is the Brewista Smart Scale II. It has all the functions you're going to want for an espresso scale. It is a compact size, so it fits on your drip tray. It's water resistant. It weighs to the tenth of a gram. It has five functions specific to espresso. But it has not forgot about pour-over brewing which happens at home or in a cafe, and so it has that sixth function.