Lelit's Bianca is a dual boiler, E61-style espresso machine with some special features, including a movable (or removeable) water reservoir, flow control, and grouphead pressure gauge. In this video, Steve shows off the variable flow control and talks us through the Bianca's specs. 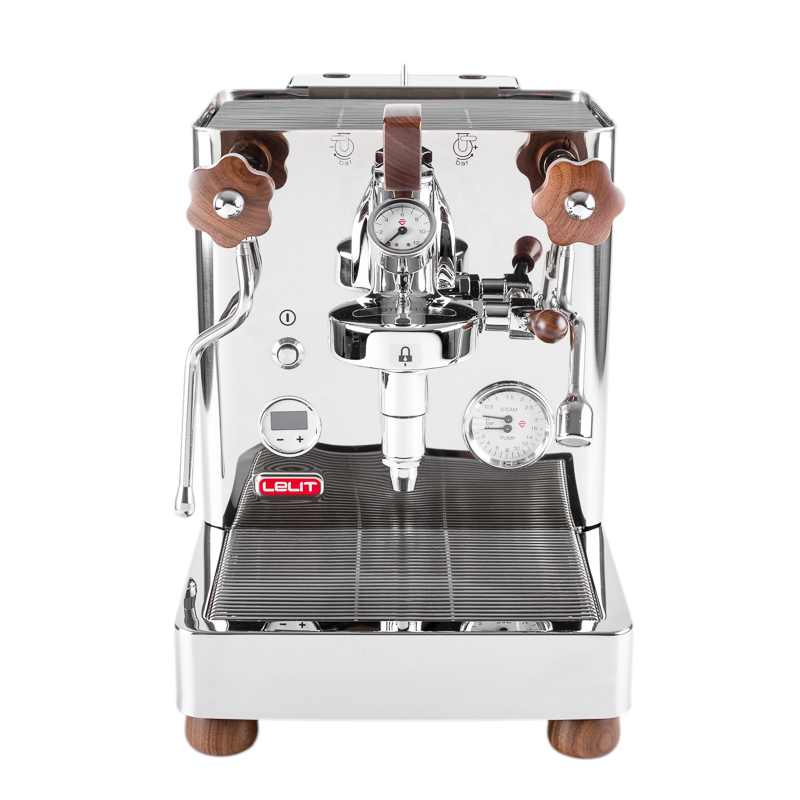 Hey. I'm Steve with Prima Coffee. And today, we're going to take a look at the Lelit Bianca dual boiler espresso machine.The Bianca is Lelit's most premium one-group espresso machine. It is a dual boiler machine, so you can brew coffee and steam milk at the same time. It has a 1.5-liter steam boiler, an 800-milliliter brew boiler, and if you're not going to plumb it in, the water tank in the back is 2.5 liters. So on the inside, here, we have a PID to maintain the temperature in both boilers, and you can set those to exactly what you want. There is a rotary pump in here instead of a vibratory pump, so it's quieter, and it's going to be more robust. And it has here what they're calling the Lelit Control Center or the LCC. In this little display right here, you can adjust things like the pre-infusion, the temperatures in both boilers, the reading of the temperature if you want it to be in Fahrenheit or in Celsius, the auto-off function, and then there's a neat eco function here too. So if you wanted to turn the steam boiler off to save energy, if you're just going to be brewing espresso, you can do that all in here in the menu. So you actually go through the menu by hitting the minus symbol here. Right now, when you're not brewing and the machine is on, you will see a reading for the brew boiler temperature. It's at 205. If you press and hold on the plus symbol, it'll show you the steam boiler temperature. So that's at 255 right now. The defining feature of the Bianca is going to be here in this flow control paddle and the pressure gauge right here above the puck, and it's going to show you the true pressure there at the group head, which few machines are able to do. This is really useful because it'll allow you to manually control the pre-infusion and then manually control the entire extraction. So if you wanted to pre-infuse at a really low pressure, so two or three bar, and then perhaps go up to eight bar for the rest of the extraction, you could do that.

So I can go and show you what that looks like. So when you have this flow control paddle all the way on this side, the flow is off. There's no flow getting there into the group. And as you move it up, more and more flow. On this side, the flow is completely open. So basically, this paddle, there's a valve underneath that, and you are opening and closing that as you move that paddle. So what that'll do is it will allow you to experiment, like I said, and find what tastes great for any individual coffee. And there's a lot more experimenting that you can do with this, so the coffee is going to taste maybe way different than you're used to on a traditional espresso machine. So let's go ahead and show you one of these shots here. We have 19 grams here in the basket, and we're using what they consider a triple basket. We're going to go ahead and start off with the flow completely open. And then once it starts to rise here, we're going to dial that way back, try to keep it down here around four. See, these drops start to come through at about 15 seconds there. And then we'll go ahead and ramp it on up to eight. So we're at 28 seconds. And this will show you the shot clock here when you have engaged the lever, 19 grams in. We're going to have 50 grams out. We'll turn that off. There we go. Because it's a dual boiler machine, the steam is immediately ready for you to use. You have your hot water dispenser over here, and both of these are just dials to open up that valve. So they include this microfiber towel that has this little Lelit logo on there, in addition to both of these portafilters here, like is it a bottomless portafilter, a blank basket as well so that you can backflush the machine, a metal tamper, but they also include two steam tips. So we have on here the one with four holes in it. It comes with that one and it also comes installed with a tip that has two holes only in there. And this will deliver a little bit less power. So if you have less experience and you want more time to get that milk right, you can use the one with two holes. We've used the one here with four. There it is, yeah. And that's just a really nice texture that you can get from the Bianca. So that is the Lelit Bianca dual boiler, E61 style, rotary pump, flow control paddle, home espresso machine.