The Apex from Orphan Espresso features enormous (78mm rotating and 75mm stationary) Ghost Tooth burrs that chew coffee beans to impressively uniform particles (comparable, yes, to that of the beloved EK43) and allow grinding clockwise or counterclockwise. In addition, the 4-1 planetary gear drive speeds the grinding process and the bean funnel and impeller organically feed beans into the burrs. Once properly secured—and it does need to be properly secured—to a base, the Apex delivers quality five times its price with relative ease. 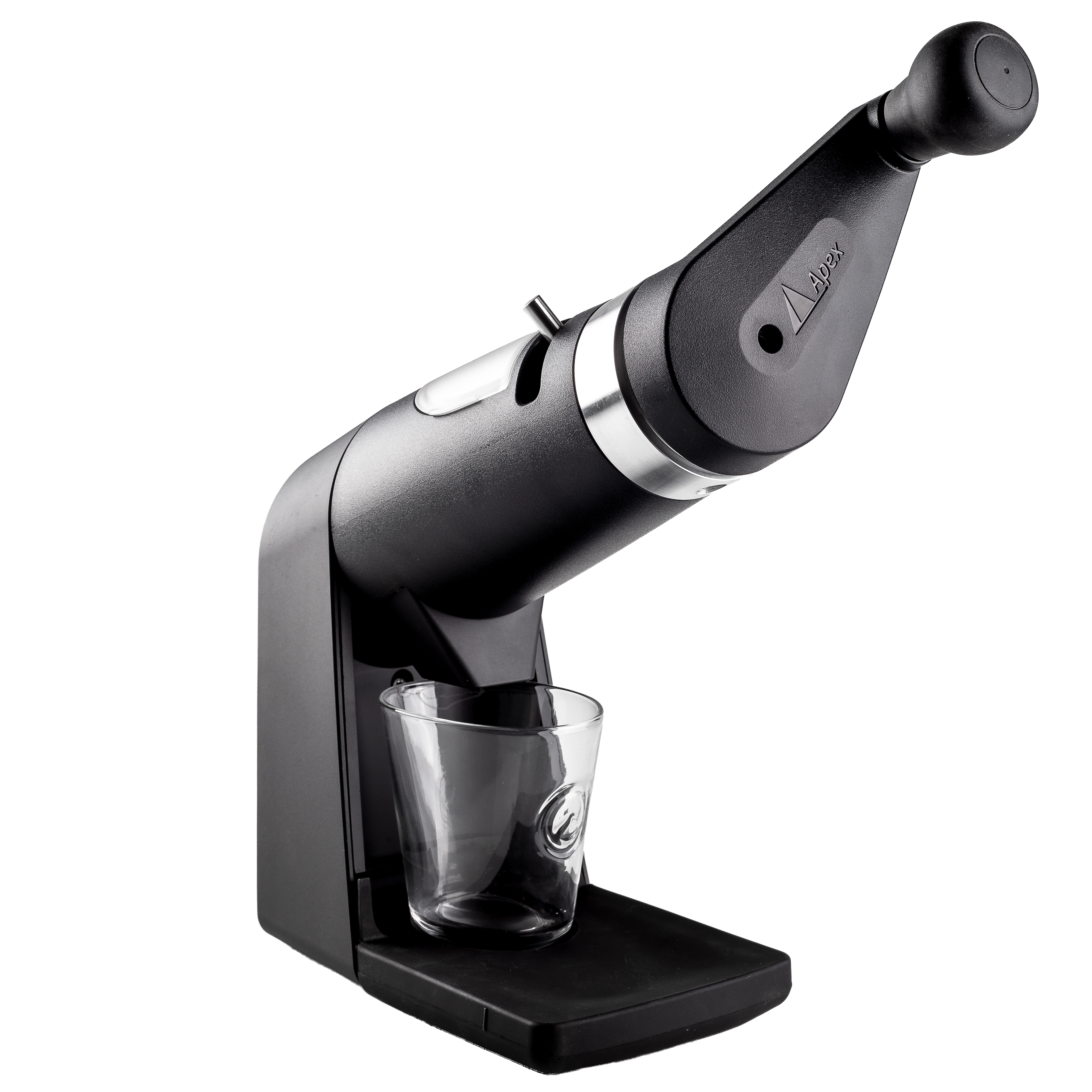 Hi. I'm Steve with Prima Coffee, and today, we're going to talk about the Apex from Orphan Espresso. So, the Apex is Orphan Espresso's largest and most impressive manual grinder to date. And it's becoming a favorite around here because of its uniqueness, and we'll show you the burrs here in a second, because of its uniform grind quality, it's very uniform, and because once it is secured, and that needs to be said again, once it is properly secured to a table or a cutting board, it is really easy to use. Let's start with the grind quality. So the grinds produced on the Apex are the most impressive we have ever seen at this price point. And we have found that it rivals that of the EK43. So, to give you an idea of what that comparison looks like, we ground 5 grams of coffee on the middle setting of the Apex and we matched that size to the EK, ground 5 grams on the EK, and you can kind of see the differences here. Two things are immediately evident. The first is that they both produce remarkably few fines, and that's to be expected on the EK43, that's kind of what it's known for. The second thing is that they both produce particles of exceptional uniformity both in the size of them and in the shape. So that is with the naked eye and with the camera, and we wanted to go a little bit further to see if what our eyes were telling us was true. So we ran a Kruve test with 25 grams from each of these grinders on that middle setting here to see how much came below 200 micron and how much came between 200 and 300 micron. We found two things. The first is that both of these grinders below 200 produce basically nothing. It was negligible and our Acaia Pearl scale could not even measure it. So that was an important finding. The other one which is perhaps a surprising one is that the Apex produced two times fewer the fines as the EK43. Which means that the EK43 produced double the amount of fines. So between 200 and 300 micron as the Apex. So those results on the Kruve do suggest that the Apex can produce the uniformity on par with the EK43. But a couple of notes are in order. One, is when we talk about the Apex, we're talking only about pour over and drip and immersion. We're not talking about espresso. It can't grind for espresso and it can't be calibrated to do so.

The second note is that if you grind too fast, so if you try to overpower the Apex, you will produce more fines. Orphan Espresso says that they recommend around 400 to 500 rpm. So that is the turning of the burr itself, not the turning of the handle. And the third note is that the Apex does retain quite a bit. We've found that for every 30 gram batch that we were grinding, the Apex would retain about 1 gram or up to 1 gram. The grinder does come with this brush and you will need to use this to clear the chute out each time after you grind because it does kind of get stuck up in there next to the burr. So that is the grind quality. The question is how does the Apex produce such uniform grinds? The answer is in the design of the burr. This uses what are called ghost tooth burrs. As you can see here, these are really different from other flat burrs. So Orphan Espresso says that this is the first and only manual grinder with flat burrs. But they're actually quite different from the traditional flat burr which looks like this. So here's an 83-millimeter burr from Mazzer. As you can see, these teeth here are directional. And that means that it has to turn clockwise to cut the bean. The ghost tooth burrs on the other hand have these pure middle teeth that face straight up. That also means that it is bidirectional. So you can turn the crank arm here in either direction, either clockwise or counter-clockwise. Both directions work just as well. And what it also helps with is if you do get stuck with a dense bean as you're grinding, you can just rotate back the other way and it should clear the path and you can get grinding again. So most premium manual grinders will have very similar components in that they're going to have a conical burr attached in some fashion to a central axle, and on both sides of the axle, you're going to have bearings to facilitate a really smooth rotation, and then you're going to have a crank arm with which to turn everything. So the Apex just has more inside of it than other grinders. However, it is admittedly much larger than other, especially hand, grinders. So it has more room to fit those parts. Perhaps the most helpful part is its four to one planetary gear drive. And basically what that means is that for each one rotation here of the crank arm, the burrs will turn four times. So that is much less work that you're going to have to do. But what that also allows is for you to quite easily reach what is the recommended RPM on this which is 400 to 500. And that comes straight from Orphan Espresso. So it will be really hard to turn the crank arm 400 times in a minute. But all you need to do is turn it about 100 to 120 times a minute. Also inside here, instead of having dual bearings or one bearing or two bearing sets, the Apex here has five bearing sets, three up front and two here on the back and it uses both needle and roller bearings. On the inside here, on the central axle, you have an optional auger. So this is just a spring that you can attach to the central axle that basically feeds beans down to the impeller, the impeller feeds into the burrs and that's how you grind. A couple of years ago though, Orphan Espresso designed a hopper funnel. And so, what this does is it sort of helps to feed more organically the beans into the impeller without trying to force them through with the spring. And they actually do not really even recommend the spring anymore as long as you're okay with the speed at which the beans are being fed. It can be a little slow and you will need to use this brush here, especially near the end, a couple of beans might have been left behind. You'll need to push them down towards the impeller and the impeller can push them into the burr. Another note here is that sometimes, especially as you get near the end of grinding a batch, a couple of beans might be stuck there near the impeller or even on the impeller and they're just not getting fed. And so, what you'll need to do is just kind of rock the crank arm here until you can kind of hear it catch and then, you can grind that through.

The hopper here can hold 60 grams of coffee which is a lot of coffee. Usually, if you're making a V60 for yourself or for 2 people, it might be 25 to 30 grams of coffee. And we found it just takes a couple minutes to grind that amount. But because of the large hopper, you could possibly use this for a catering operation or a mobile coffee cart and you'll spend less money than you would on an electric grinder and you'll get way better results. So you're getting results here, like we said before, with uniformity on par with an EK43. So as far as the accessories, like we said, it does come with a brush here. And it also comes with this 7-ounce hand-blown glass grinds catch. It has a little place for it, a cutout in the silicone mat where this fits perfectly. Orphan Espresso includes in the package six anti-slip silicone gel pads. And those are supposed to be used to put on the base here if you do not plan to actually bolt this or screw this into a table or a cutting board. Now, we found that those actually did not work well enough to keep the grinder in its place. As we turned the crank arm here, it would still rock or slide across the counter a little bit. So Orphan Espresso does include four pre-drilled holes in the base to allow you to secure it to a surface and that is really how it's supposed to be used. So either a countertop or like we've done here to a cutting board. Orphan Espresso also recommends using sort of a large circular cutting board or a butcher block and that is true that the larger the cutting board, the larger the surface, the heavier the surface that you're going to fix this to, the easier it's going to be to operate this. You can just do one-handed operation at that point. So we did some research and we found that the smallest that you can go on a cutting board before the grinder starts to feel unsecure as you're grinding is about 12 inches by 18 inches. And we also found that you're going to want to secure the back of the cutting board here as closely to the center point on the cutting board as you can for it to feel very secure because that is really where all the weight is. So one good thing about this grinder in terms of getting it to stay in its place is that it weighs 11 pounds. So there's a lot of metal here, including this molded zinc base. The only plastic is really the crank arm and the cover here for the hopper and then the cover here that is around the hopper. Everything else, or most everything else, is metal. So this is a heavy grinder. However, it's just, it's kind of narrow here. And so, it will rock if not properly secured. So that is the Apex from Orphan Espresso. It does require some elbow grease, but once it is properly secured to a heavy surface, and it does need to be properly secured to a heavy surface, this thing is a joy to use. It has that four to one planetary gear drive that makes grinding motion easy on you and it has those ghost tooth burrs that produce those really uniform grinds on par with grinders more than five times its price.