The Fixie from Orphan Espresso is every backpacker’s dream. Made of ultra-lightweight materials, such as carbon fiber and titanium, the Fixie, with all of its components, weighs only 12 ounces, some of which can be shed once the grind is set. In this video, Steve highlights the materials in addition to the other features that make it so unique. 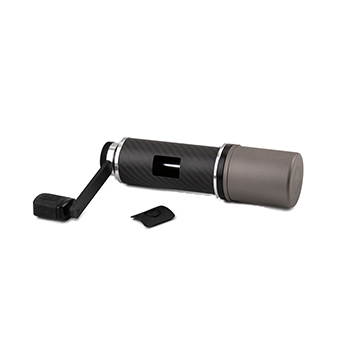 Hi, I'm Steve with Prima Coffee. And today, we're going to talk about the Fixie from Orphan Espresso. So, it's called the Fixie because just like a fixed-gear bicycle, it's supposed to have only one grind setting when you take it out on the road with you. Let me kind of show you how that works. It's a little confusing at first. The idea here is that the grind adjustment system all comes inside this little tin here. On a lot of hand grinders, what you have is a wheel on the bottom of this center burr that you turn to the right to make it finer, and you turn to the left to make it coarser. And basically, what you're doing is you are managing the distance between the two burrs, right? When you turn to the right, it pushes the bottom burr up, so it makes it finer. And when you turn it the other way, it pulls the burr down, makes it coarser. The Fixie uses a set of spacers to put here under the top nut and above the body on the axle that raise when put in place, raise that bottom burr, or sort of center burr, up, and that makes it finer. So, all the adjustments that you're going to make are to make this thing finer. It's a little counterintuitive at first, but once you get the hang of it, it'll be pretty easy. Let me kind of show you how that works. So, in order to adjust the grind, you'll need to take the top nut off. So, you'll just take that off, and you'll need to take this handle off as well. If you don't have it set on the table, that center burr will just fall out. So, you do want to have it set on a table or, in the very least, hold it in your hand when you're doing that so that this bottom burr doesn't just come out. The adjustment system is a set, like I said, of spacers. But Orphan Espresso has provided three main changes, and that is the one disk, so you can see it has one hole in it, the two-disk, that has two holes, and the three-disk, which has three. And they're all based on size, thickness. The three is the coarsest, so that's going to be the thinnest, therefore, it pushes the center burr up the least. The number one is the thickest, therefore, it pushes that center burr up the most. So, that is perfect for like your Aeropress, or for me, it's a 14-gram Aeropress.

The number one works really well. That two is your medium range, so that's your V60 and Kalita Wave. In my experience, I've found that it's still a little too coarse for V60, so you're going to need to push up the grind a little bit toward the fine. And the third one is just too coarse for any method, including Chemex and French press. So, you'll need to push that up a little bit. So, these are your three general grind changes. In order to make those fine-tuned adjustments, they include these three shims that are made of...sorry, two shims that are made of Teflon. One of them is 0.2 millimeters, and the other is 0.1 millimeters, so really minute adjustments. They've given you two of each that you can use. You can feel the difference so you know which one's which. So, if we're going to do a V60, I would put the two on. And then I know from experience that I would then find the thicker one of the Teflon shims, and that is the 0.2 millimeters, and I'd put that on. And then you just put the handle on, it has a little rectangle here. So, you're going to need to find the position on top here and fit that on with that. And then you put the top nut on top of those to hold it all together. Just spin it on. And that's it. Your grind is set. You'll just add in the grinds catch and you're good to start grinding. When you're taking this on and off, there is a way to do it. So, we found that we actually damaged the silicone seal here when we took it off incorrectly. So, this is a quick-release seal, and what it's meant to happen is for you to sort of turn it to the side to get it off. If you are to pull it off, you might damage that seal. It's meant to resist straight pull. And to put it back on, you just put it straight on and do a little twist. Now, because of that top adjustment system, there's no place for you to pour the beans in up there. So, Orphan Espresso has designed this little side opening into the body. So, the best we found, the best way to fill the hopper here is to use the grinds catch and fill this up with your coffee and then hold it, Orphan Espresso did recommend this and it works, hold it sort of corner to corner and pour in slowly. Now, you're going to spill some of the beans as you're doing that, and you'll just eventually get the hang of how that works. To put this little silicon cover on, you'll just squeeze it a little bit, push it against that hole, and you should be good to go. Like I said early on, this is made for travel.

And so, the most important part of the design from Orphan Espresso's standpoint, and in our use of this grinder, is in the materials. They are really, really light. It only weighs 330 grams all together. And the heaviest part is that center burr assembly, which includes that aluminum axle, and that weighs 90 grams alone. So, you can see how much of the weight is coming just from that. The burr set here on the Fixie is a 47-millimeter stainless steel conical burr set designed by Etzinger. So, you can kind of see it there. It's just one millimeter smaller than the burrs that are used on the LIDO-Series. And again, this is the heaviest part. The body is made of carbon fiber, as is the handle. The pommel here is silicone, as is this quick release seal for the grinds catch. The grinds catch is titanium, much lighter than other metals. So, all of these materials here together put inside, putting the shims inside the tin, throwing them in the bag, that is only 12 ounces, which is about the weight of the bag of coffee that you're going to take with you. So, I know that there will be some people asking about the Aeropress. Does the Fixie fit inside the Aeropress? The answer is yes. However, you can fit the body inside the body of the Aeropress, or turn it over, you can fit it into the plunger, but then you still have all these other parts to deal with. And with the Aeropress, it won't fit into the bag. So, your best bet is just to put it into the bag, and this bag does have a little pocket inside for the handle so that when you're traveling, it won't scratch the body of the grinder. So, it's important to see what the grinds look like. So, I've ground five grams with the one- hole disk, five with the two-hole disk, and five with the three-hole disk so you can have an idea of what that looks like. With the one hole, like I said before, it's really kind of perfect for the Aeropress. And it produced, out of all the different methods we used, on the finer setting, the most vibrant cup of coffee. As we went coarser, we lost some of that sweetness. And the reason that we found is because it produces more fines than, let's say, the grinders in the LIDO Series from Orphan Espresso. And overall, the distribution is wider. So, even when you're up there working for Chemex and French Press, you're going to have more fines than with that LIDO Series. However, that's kind of beside the point, because this thing is made for travel and I don't think you're going to take a glass Chemex or a glass French Press with you on the trail. You're probably going to want to take something closer to an Aeropress or a V60. One cool note about this is that it has zero retention or pretty close to zero. The reason is because there's nothing to get in the way of the path between the burr here and the grinds catch. Whereas if you're using other grind adjustments systems, such as the wheel that's underneath that burr, there might be recesses for coffee to collect. That isn't the case with this. It is just that bottom burr and it falls from that into this titanium grinds catch. So, that is the Fixie from Orphan Espresso. Everything about this was made for travel. The weight of this, the size of this, that adjustment system, so that you can use only what you need and leave everything else behind, and this cool Tyvek bag that has a pocket inside for the handle. This is the perfect grinder if you're a camper or a backpacker where you want to save as much as you can on the weight without compromising the quality of the cup.