The Rancilio Rocky doserless espresso grinder is the perfect companion for the Silvia espresso machine. As an entry-level grinder, it is completely manual, but it's fast, grinding out about 1g/s at 1350 RPM with 50mm flat steel burrs. Check out this video to see Steve talk through the components and features and show the Rocky in action. 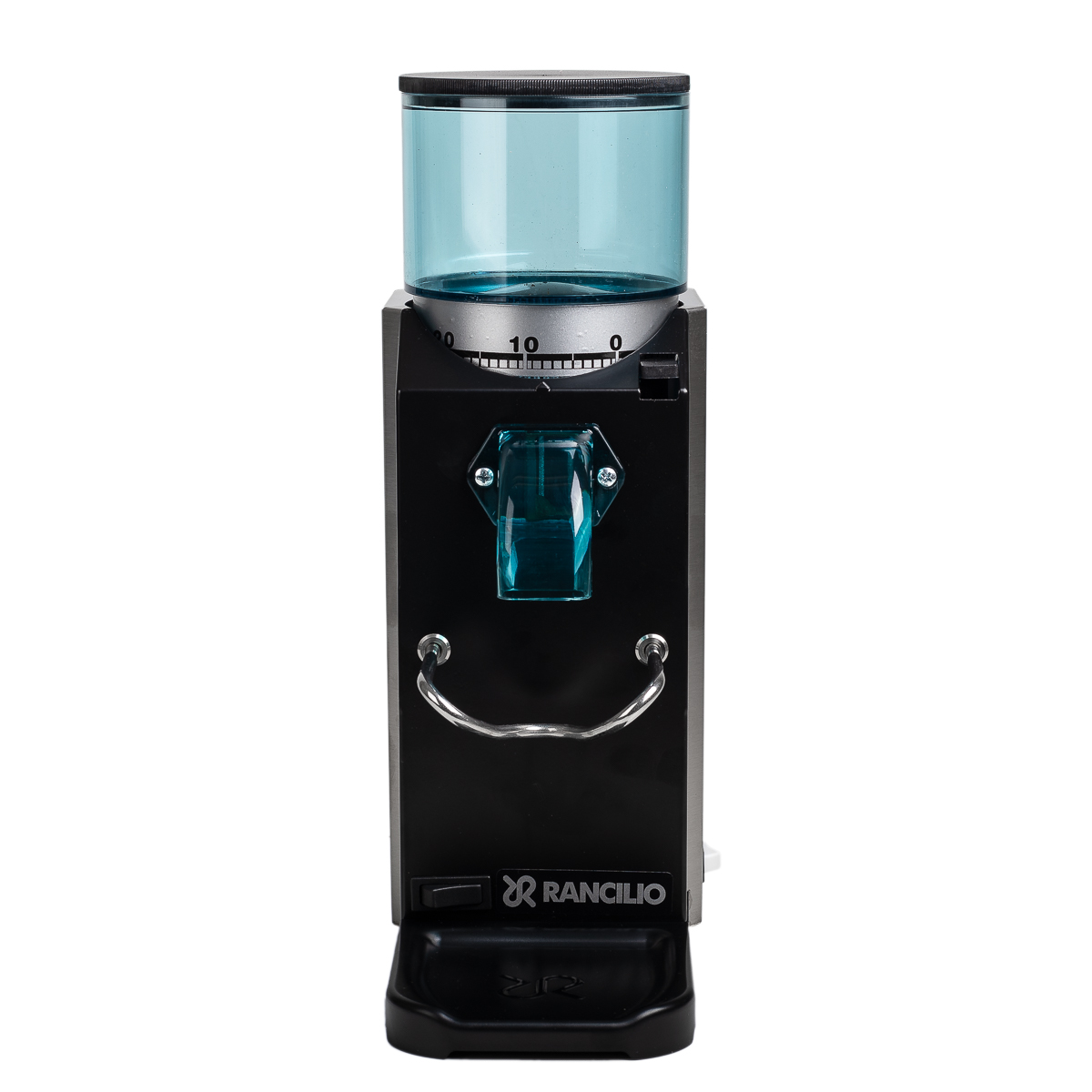 Hey, I'm Steve with Prima Coffee, and today, we're going to take a look at the Rancilio Rocky. As you can see by the design, it is made to sort of fit really well with your Rancilio Silvia espresso machine, which is an entry-level espresso machine, and this is your entry-level espresso grinder. It is really affordable, as far as espresso grinders go. Like the Silvia, the Rancilio Rocky has been around for more than 20 years. So it is tried and true, and it is still being made and it still works really well. It is a solid build. This is a metal body here. The plastic parts are going to be just sort of on the accessories. You've got your chute. You have your tray here, and this large hopper, plastic lid, plastic hopper. It is really easy to take apart for cleaning. You just need a Phillip's head here to take off that chute. And it does collect some of that retention right there at the top of the chute. And then, behind that, where there is... you can kind of see it there...a little silicon gasket, to make sure that no coffee gets down into the body of the grinder. But it does collect some between the burrs and right there, on the front of the chute. Aand all you need is a flathead screwdriver to get into the burrs. You will go ahead and take off the hopper first by taking out those three screws, and then you'll just be able to unscrew the stationary burr, which is on threads. So, very easy to take apart for cleaning. As far as functioning goes here, you can see that it has this metal portafilter holder. However, we find that it actually does not fit even...this is the Rancilio Silvia portafilter. It is 58 millimeters. It doesn't fit this one perfectly. So, if you try to put it into the front, you'll see that it doesn't. You have to kind of put it at an angle, but if you do it an angle, it does fit, so it's not really that big of an issue. We have a 57-millimeter portafilter, and you can see that one does fit in there. So, depending on your machine, this may or may not fit perfectly in there. You may actually just have to hold it when you are dosing out.

The Rocky does not grind automatically, does not grind by time, it does not grind by weight. You actually have to hold down the grind button the entire time that you want it to dose out. Rancilio says it is about one gram per second this can grind out. But we find that on espresso, when we had dialed it in for our espresso machine over here, at 18 grams, that it was actually coming out about one and a half grams per second. To adjust the grind on the Rocky, there is a tab over here, on the left hand side, and just press that down. It frees up the threads there. Turn it clockwise, if you want to go finer, counterclockwise if you want it coarser. And then it should click into place, which means this is a stepped grind adjustment system, not a stepless grind adjustment system. So if you're looking to make those really tiny changes for your espresso, this may not be the grinder for you, because we found that when we had dialed this in for our espresso, about 18 grams in, 40 grams out, when we changed it, when we went one step on here coarser, the difference was about seven seconds. So we'd have to make up for those seven seconds with the dose, if that's what we wanted to do. However, again, this is an entry-level grinder, and it does its job really well.

So that brings us to the burrs. The Rocky has 15-millimeter flat steel burrs in here, and those burrs are cut more for espresso. So, we see this primarily as an espresso grinder. We have read that some people do use it to go coarser for brewing, and it can do that. As you get up toward 40, so in the 30s, and all the way up to 40, you will find that you can have a grind that you might use for pour-over or for Chemex, or something like that. But, the tradeoff there is that, because it's really good, these burrs are really good at producing fines, again, as an espresso grinder, espresso burrs, when you get up there, it still is producing fines that sort of stick to those larger boulders or larger particles, and so that your cut might not be as clean as you want it to be. So we're recommending this for espresso. I'm just telling you that caveat if you want to use it for brewing. So, as far as retention goes, we're finding that the Rocky will retain about one-tenth of a gram to one-half a gram, on average. So sometimes you're going to have more than that, and usually you can see it, again, stuck there at the top of the chute. Sometimes you're going to get more coffee out of here than what you put in, if you're single dosing, and that just means that, again, some of that retained coffee that is probably either right in front of the burrs, behind that gasket there, or, again, that you could see here, has been pushed out, but again, on average, about one-tenth to half of a gram. We have 20 grams here, I'll put in here. Again, to grind, turn it on on the side, and you have to hold this button the whole time while you're grinding.

So you can see here that the retention, or some of the retention, is right there. So we kind of give it a couple of taps here. If you don't mind, again, rocking your grinder, you're probably going to get more of that out. And we have 19.3. Now, this brings us to another kind of interesting... So that's 0.7. Again, I can see it, so I can rock that out, but the other issue is that I can see right here that the screw holes in the hopper is large enough, or just perfectly large enough, to catch beans. So each of these screw holes right now has caught a bean, and so you're going to want something around, like a little screwdriver, where you can basically knock those out and get those down into the burrs. And then we can go ahead and see if we can get the rest of that out here. So, there's 19.7, so again, if you got closer on here, you'd be able to see that there is still some coffee stuck right there in the chute. That is just the design of this chute, and that is why you're going to want to have a screwdriver around every once in awhile to go ahead and clear that out, or a brush that you can use to push up in there and clear out that retention. So that is the Rocky from Rancilio. It is an entry-level espresso grinder. It looks really good next to your Silvia, which is an entry-level espresso machine. You can find it in both black and in silver. It is a stepped grind adjustment, so there will be some tradeoffs, but, again, it is a really great price.