The Tricolate coffee brewer garners high extractions with little effort. It is made of Tritan plastic, which is shatterproof and hard to scratch, and has two parts—a dispersion screen to control water flow and height; and a main compartment for the coffee, filter, and water. Watch this video to hear Steve talk about the problems of brewing that the Tricolate is looking to solve. 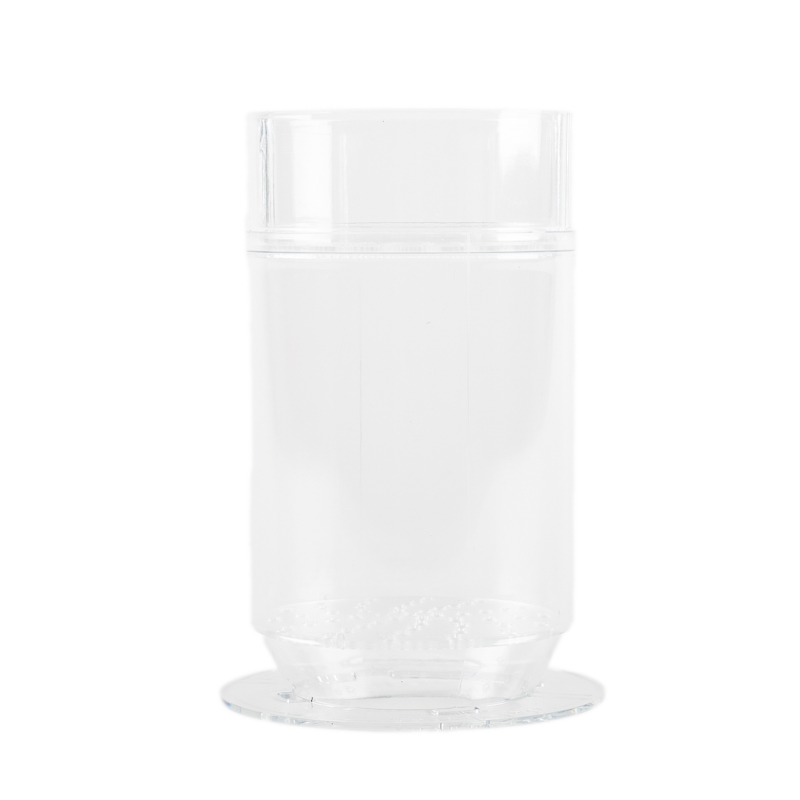 Works with All Kettles

Hey, I'm Steve with Prima Coffee, and today, we're going to take a look at this Tricolate Coffee Brewer. The Tricolate is a pour-over brewer, even though it looks a little different from most drippers that you may see. It is made of Tritan plastic, so it is very durable, it's scratchproof, shatterproof, and it is made to look like glass. What that also means is that you're going to see all the coffee oils that accumulate here after a brew, so you're going to want to clean this quite often. It's another reason to keep some Cafiza around to make sure that there's nothing getting in the way of a really good-tasting cup of coffee. The Tricolate is trying to solve two problems. The first one is bypass. So in some other drippers out there, that are cone shaped especially, even if they have a flat bottom, some of the water that you pour in during the process is going to get behind the filter, and then get into your cup, without having first passed through the coffee bed. And so, the Tricolate here is a cylinder. And the filter goes flat here against the bottom, and no water can pass through this without first having passed through that coffee bed, so there won't be any bypass. One of the things that means is that you might have to go with higher ratios to get the kind of coffee that you're expecting, if you're used to using a V60, or Kalita Wave or something like that, all the way up to, the Tricolate is saying, you know, a 1 to 22 ratio. We were messing around with 1 to 16 to 1 to 20 ratios, and we've had really good results. The extractions are always very high, upwards of 22%. You might just want to find out what is the TDS that you prefer. And then, so that's basically, that's sort of the mouthfeel and how many coffee solids are in there, and that's the ratio that you're going to want to go with. Probably want to start somewhere around 1 to 18, and then, kind of, work from there. The other problem the Tricolate is trying to solve is agitation. So there is a dispersion screen that you pour the water into. It's about 4 inches from the bottom here so you can say like 3.5 inches from your coffee bed. And so this will actually control the height from which that coffee is being poured, and it will also control the speed at which it is being poured, because all these little holes here, these little perforations, can only take so much water through at a time. What that all means is it's a really easy pour-over brewer to use. There are really only two steps. We're going to pour in the water at first to bloom, and then after that, you're going to pour in the rest of the water, and then you can, at that point, walk away and come back. And it should be ready in about 5 to 10 minutes, depending on the coffee that you're using, so lighter-roaster coffees may take longer, and depending on the grind that you're using as well. So to brew with this, you need to take one of the filters... So in the package here, you're going to get a pack of filters. There are 100 in here so it should last you a while. You just need to take one of these out, and then you can drop it into the Tricolate and kind of push that down. As always, we're going to recommend that you, well, rinse that filter, so there's none of that paper taste getting into your coffee.

All right. So going to go ahead and pour some in. This will heat the vessel and also rinse that filter in there. We are using boiling water here. The reason we do that is because you have this dispersion screen that will act as a little bit of a heat sink, and make sure that when this water, even if it's boiling, reaches the coffee bed, it will not be too hot. So the first thing that we do, we're using 20 grams of coffee. So I'm going to go ahead and pour in 60 grams of water. I am using a special kettle just because I do not have another one around at this point. There's 60 grams. When all the water gets in there, we'll just give it a swirl. And then we'll let that bloom up until about 45 seconds. It's been 45 seconds, you can go ahead and pour in the rest. We're going to do a 1 to 16 ratio here, so I'm going to go ahead and just pour 320 grams of water. Like I said, you want to mess around with between 1 to 16 and 1 to 20, and it's all getting high extractions. Just is a matter of how much total-dissolved solids you want, so we're getting that mouthfeel that you prefer or that you're used to. So that's 320 right there. And I'll give it another swirl. So at this point, your work is pretty much done. You can just wait for it to drawdown, and like I said, it will take anywhere between 5 minutes and 10 minutes. The reason that your work is done is it has this really wide and flatbed of the dripper here. And like I said, all the water needs to pass through that bed before it gets into the cup here. It's all going to have solids in it, so it's all going to be the good stuff. But being that the bed is going to be so thin, because this is 80 millimeters, which is about 3 inches, that it does sort of make sure that you have an even extraction as well as that high extraction. So there we go. That is about 4 minutes and 50 seconds there. It's almost finished. You can see we didn't touch it that whole time. That bed is still very much flat. The dispersion screen did the work of making sure that it was distributed throughout, and also that it was properly agitating the coffee to encourage that really high extraction without having to do too much work of my own. So that is the Tricolate Brewer right there. It is really easy to use, and it solves a couple of problems that some baristas may have. You can use any kettle. You don't have to have a practiced hand at pouring, and it's going to get you a really high extraction, pretty much every time.