With the Virtuoso+ conical burr coffee grinder, Baratza adds some seriously convenient usability features to its popular, long-standing Virtuoso model. The new digital timer and LCD display allow you to set your exact desired grind time so you can grind just what you need for your brews. As with the previous iterations of the Virtuoso, the Virtuoso+ features 40 mm conical steel burrs, and 40 grind settings that offer a wide range of sizes from very fine to coarse. See the Virtuoso+ in action in this video, and discover why we think it absolutely shines as a home brew grinder.

Hey, folks, it's Steve with Prima Coffee. Today we're taking a look at Baratza's Virtuoso+ coffee grinder. It is a replacement for the long-loved and time-tested Virtuoso. It's got some really nice updates it brings to the table, plus a lot of the same old features that we already love. 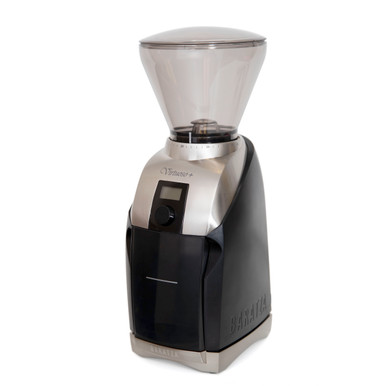 So, again, this is a replacement for the old Virtuoso. Internally, it's pretty much the same old grinder, what Baratza had done is basically just bring some new updates to the grinder, make it a little bit more user-friendly and solve some of the issues that they were seeing with the Virtuoso in terms of overall use and kind of expectations from how it works. So it looks pretty much exactly the same, you'll notice that we now, instead of a little timer knob on the side, have a digital timer on the front. And then that is the first of a couple of different upgrades that we've added to the Virtuoso Plus.

Instead of that dial timer, we now have a digital timer that can be adjusted from 1 to 40 seconds in tenth of a second increments. Turning the dial one way will add full seconds and turning it back will basically remove one-tenth of a second at a time. So if you want that precision it's available, if you don't really care or you're even single-dosing your grinder, you can just kind of set it wherever you need it. There is also a pulse mode function, so instead of using the dial I can just hold down the button until P shows on the screen and then I can just hit it again... ...and hold it for as long as I need to actually grind that coffee. You'll also probably notice that we've got some lights down below and that is a really nice feature. Honestly, we'd love to see it on a lot of Baratza's other grinders, but the lights are there along with a new kind of more transparent grinds bin to make it easier to see how full this has gotten.

Baratza noted that, you know, sometimes people would forget how much coffee was actually in the grinds bin and they'd continue to grind and sometimes it would get backed up into the burrs and cause some damage to the motor, so it's a lot harder to make that mistake if you have a very clear grinds bin and some lights to show you how much coffee is actually in there. So between those two, those are our two major upgrades to this grinder. Inside, we still have 40-millimeter conical steel burrs, we still have 40 grind adjustment settings that you can access by twisting the hopper, we still got basically the same grind range from a pretty fine like AeroPress or single-cup V60 up to French press, and we've also got the same eight-ounce hopper up top and five-ounce grounds bin down below.

We also still have some of that heft that the Virtuoso is known for. It's a very robust kind of mid-range level consumer grinder. You can basically expect the same exact grind-quality out of this as the previous Virtuoso, and, you know, it's just a fairly modest price increase for the upgrades that we've got here. So overall, pretty much the same Virtuoso that we already kind of have grown to love with a couple of nice little features that make it a little bit easier to use whether you're a novice or a professional. So that's the Baratza Virtuoso+. Thanks for watching guys.