When it comes to exceptionally tasting coffee made from a simple but elegant process, the Chemex has no rival. Invented in 1941 by chemist Peter J. Schlumbohm, Ph.D., these beautiful brewers are truly an outstanding example of American Design. In this video, Steve shares on the brewer sizes and styles available from Chemex, so you can select the one that's the right fit for you.

Hey there, it's Steve from Prima Coffee. Today we're going to take a look at Chemex's line of brewers and just sort of explore the differences in the sizes and styles and try to figure out which you might want to pick when you're deciding to buy a Chemex. So over here on the left we have the three cup Chemex, the six cup, the eight cup and the 10 cup. Now that's all based on a five ounce cup, you know, according to Chemex's standards so the 10 cup is going to hold 50 ounces, eight cup will hold 40 ounces, six cup 30, and three cup will hold about 15 or 16 ounces. 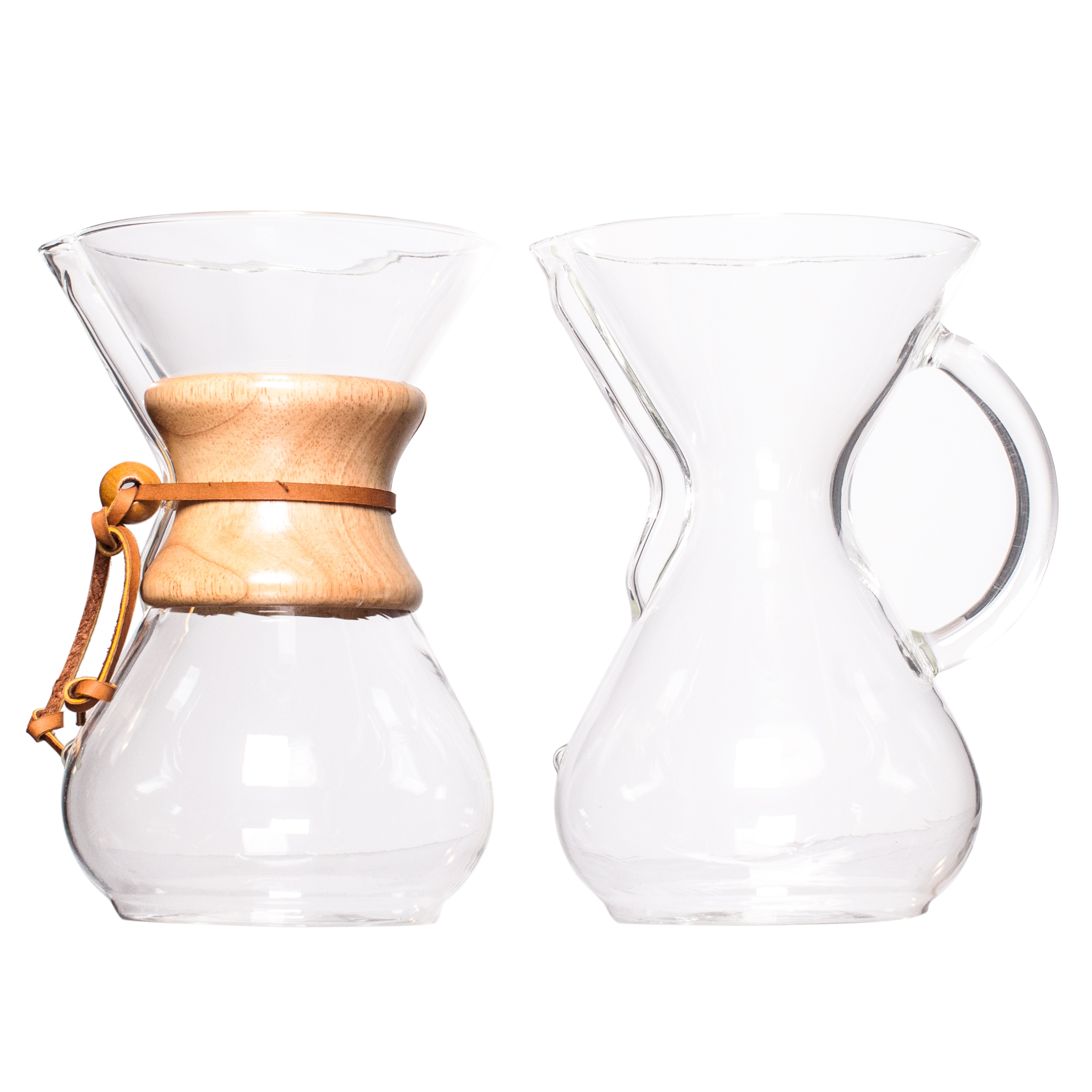 Chemex Coffeemakers come in 3,6,8, and 10 cup versions, with either a glass handle or a wooden collar with a leather tie

The main difference between the three cup and the other sizes is in the filter. So a three cup filter uses a slightly different design. It comes unfolded so you have fold them yourself. It's also a much steeper and smaller cone size. So you'll see that a standard Chemex filter would not fit into a three cup filter unless you, or a three cup Chemex unless you refold it. But it will fit easily into the 6, 8, or 10. Now the 6, 8 and 10 all use the same upper cone style and shape and size so they all take the same size filters and really the difference is the capacity of the bottom. So you'll be brewing even across the three cup you brew pretty much the same way. The three cup takes a little bit less care, honestly, because it’s so vertical you don't have to pay quite as much attention to where you're pouring but the 6, 8 and 10 pretty much the same exact pouring style and the same cup of coffee and really the big flavor changer here is the filter.

The filter gives the Chemex its signature taste, that clean crisp cup of coffee and all of the filters use the same paper. So really when it comes down to it, the choice of the Chemex is going to be based on volume and style. So we obviously have two different styles of each Chemex here. We have the glass handle variety with its own glass handle built in and the wood collar variety which has a wood collar with a leather wrap instead. Now really that's just a style element. It doesn't affect how it brews, it really doesn't affect anything else. It does take a little bit more care with the wood. You want to make sure that these stay nice and clean and dry. If you leave them wet for too long it might start to bubble the varnish or discolor over time. So you want to make sure that you're taking care of the wood. But really apart from that, it's just a style element. You know these two six cup Chemexes are exactly the same coffee. So really that's the Chemex line. We have four different sizes in two styles each, really something for everybody. Thanks for watching.