Whether you use it for batch brew, manual brewing, or even espresso, Mazzer's innovative new ZM digital grinder yields excellent and balanced results in the cup. A well-built, study machine with a new paradigm in grind size adjustment and a handful of new burr sets, the ZM handily demonstrates Mazzer's ability to produce something utterly unique. Learn more about the ZM in this video, as Steve delves into this original grinder from Mazzer.

Hey, guys. It's Steve with Prima Coffee, here. Today, we're going to take a look at the Mazzer ZM Filter Grinder. It's a pretty high-tech filter grinder coming out from Mazzer with a lot of really awesome features that are probably going to change the game for a lot of people using, you know, filter grinders on a bar, or even across different shops if you have multiple cafes. So inside we have 83-millimeter flat steel burrs. There's actually up to four different burr styles that you can get for this grinder. The standard ones are filter coffee burrs, but there are a couple of different for espresso or fine grinding, plus some coated burrs, a few different options really. Obviously, you'll notice we have this big digital screen up front and that is because inside there's a pretty robust electronic system. You also notice that there is no obvious way to adjust the burrs. I'll show you how to do that. There we go. They are electronically adjustable. 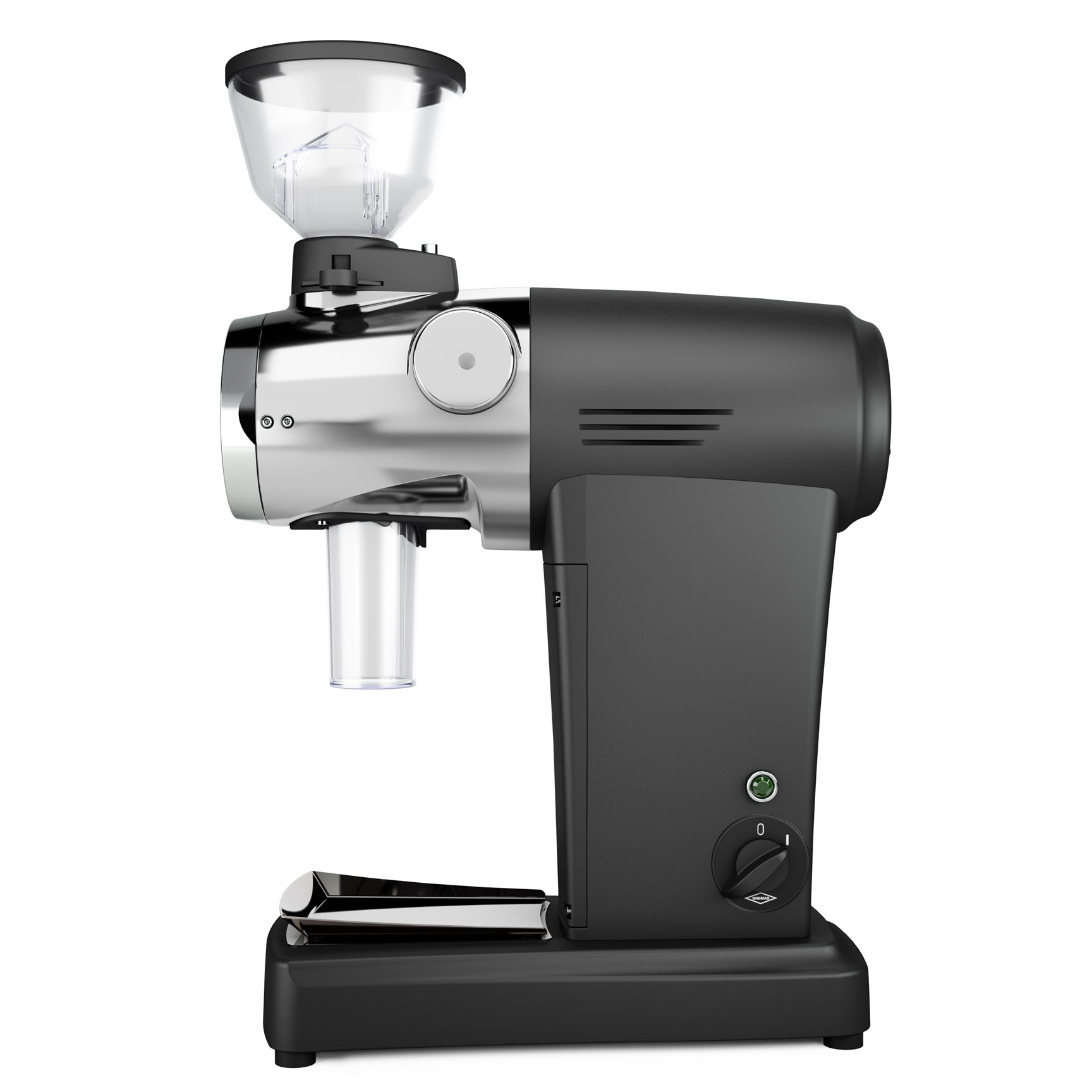 The numbers that you see on the screen are actually microns, so that's the distance the burrs are from each other in real microns. That is a departure from these, kind of, vague reference numbers that you'll see on pretty much every other grinder out there these days. We're actually measuring the real distance between the burrs, here. And that's going to be a tremendous game changer for anyone who's grinding coffee these days. And that's because we have a real reference point to use for grinding now. There's a stepper motor in the grinder that actually adjusts the burr distance from each other. And if you were to install new burrs, for example, it goes through a zeroing process to tell where the actual zero point is between these two burrs. Now, retention in this grinder is actually also very small, and that's a big important step for making a consistent adjustment mechanism like this.

Retention is along the lines of maybe half a gram at most. And most of that is actually in this slight channel between the bottom of the burrs and the catch cup or chute. There's not a lot being retained in the burrs themselves. And the way that the grinder's designed, the exit path is directly at the bottom of the burrs, right where the opening lines up. There's not a lot of places, not a lot of nooks and crannies for the grinds to really get stuck in the burrs. And with espresso, you might see a little bit more, but because of the actual wind-down RPMs after it's done grinding, a lot of that is actually going to get kicked out at the end. So really, really minimal retention and that is going to make the zeroing and adjustment process a lot more accurate because you just don't have much coffee getting stuck in between the burrs. That also means, the electronic dosing also means that you can communicate settings more reliably and more accurately between different grinders.

So if you're a shop and you've got five different cafes, and you all are using the Mazzer ZM, you can say here's the grind setting that we're actually using for, you know, our Ethiopian. It's 400 microns and you can communicate that and reliably replicate that grind setting between each of your shops. Now, there is some burr wear to account for, you know, if one has been in service longer than another, that will affect the grind slightly, but this going to be one of the most reliable ways to communicate setting between different grinders. You don't have to worry about how the grinders calibrated. You don't have to worry too much about burr parallelism because the zeroing process is also checking for parallelism. If something is off-kilter, the grinder is going to have a problem actually zeroing the burrs and you're going to know it. So really, really cool adjustment system there, and it's very easy to use and dial in a coffee as well.

So you notice I have four different profiles that I can store here. They're all set for different burr distances. Now, learning the actual distance numbers might take a little getting used to, but it's still fairly easy. Somewhere in the 200 to 400 range is going to be most, like, single-cup brews going up to 500, 800, for larger batch brews. Somewhere in the 850 to 900 range might be very coarse for, like, cold brew or something like that. Also, it, sort of, depends on the coffee that you're using because they'll fracture differently as they're being ground. But still, again, it's a more precise and more accurate means of measuring grind setting. So taking a look at how to actually go into these settings, we have this adjustment wheel here. It has both a turning and a push button. So if I go into my setting here, I can actually just twist to change the burr distance and give it the tap again, and it will change immediately.

If I really like that setting, I can go in and I can save it, save it here, and I can choose either an existing profile that's been saved or choose an empty one. So if I want to save it to this, I'll just say...oops. We'll save it again and hit OK, and now I have it saved. So you can save many different grind profiles in here. You can save them to the preset buttons if you like. To do that, you just hold and select the profile that you want. Just give that a tap, and now we're saved. You also notice that when you make a selection you get the name of the coffee or profile coming up so that's a really great reference point again, if you're storing multiple coffees in the profile settings. In the short list, they're basically just the burr distance. So you can get a sense of, you know, where it's going to be in terms of actual burr distance.

Down below, we have sort of bayonet-style swappable either chutes or catch cups. Really handy, you know, if you have, you know, a retail grinding for V60s single-cup brews or something like that, they can use one of these catch cups. It holds about 60 grams of ground coffee. Or you can use a spout like this, with a bag clip for grinding your retail bag. Now, in terms of actually grinding like large batches for cold brew, obviously, the clearance here isn't huge. It would be tough to get a five-pound bag under there but if you have, you know, let's say you want to grind a five-pound bag at a time for cold brew, you do have enough clearance for maybe like a larger food service container or something like that. It just might be a little bit hard to get a larger-sized bag underneath. The primary intended use is mainly going to be for, kind of, filter coffee-grinding on bar.

Up top apparently is a 150-gram hopper. You can get a larger hopper if you like, but, again, because the intended purpose is more of that, kind of, filter coffee-grinding, it's, sort of, intended to have smaller doses. You can also set it to a timed grinding mode. So especially if you want to use it for espresso, you can go into your settings, you can go into mode, and set time rather than just…now, that will keep a fixed distance in the burrs and change it over to purely time. But again, if you're grinding for espresso you're probably not changing your grind setting too often throughout the day. So if you would like to use espresso burrs and mainly focus on grinding by time, you can do that as well.

There's some other features in the electronics panel like going into settings and things, like how much has been ground per profile and that sort of thing. So the data that is available can be pretty useful for shop owners or roasters, especially if you have client accounts that you might want to check up on. But overall, the main features are that stepper motor, the precision of adjustment, lower tension, and high repeatability as well as repeatability across grinders. So that's really some of the most game-changing features of the Mazzer ZM Filter. So there you have it, the Mazzer ZM Filter-Grinder. Thanks for watching.