Developed in partnership with a team of champion baristas, the Nuova Simonelli Mythos One is an all around redesign of what an espresso grinder should be. Its Clima Pro technology keeps its grinding area at a more static temperature, so you can get more uniform shots all day long no matter what your volume is. It also houses titanium-coated steel burrs for a longer life, and a unique membrane below the burrs to promote a fluffy and consistent grind to keep your shots at their best and your customers at their happiest.

- Designed with the help of barista champions and professionals, Nuova Simonelli's Mythos One is an all-around redesign of what an espresso grinder should be. From its minuscule grinder tension to revolutionary Clima Pro Technology, the Mythos One is packed with features that will make it your new favorite espresso grinder. 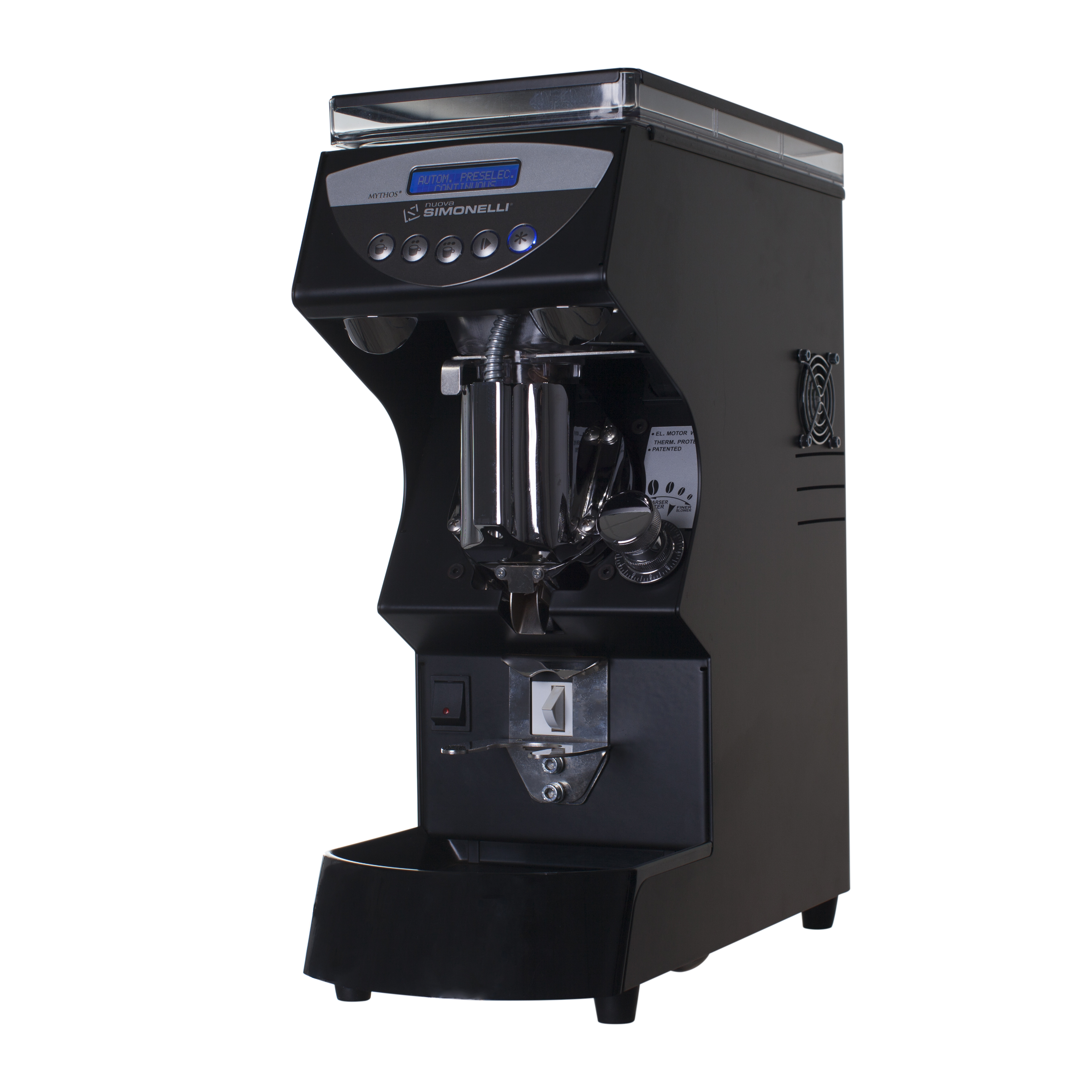 The Mythos One has 75mm flat titanium-coated steel burrs, a multi-function LCD display, and a 2.8 pound hopper.

Hey folks, it's Steve with Prima Coffee here. In front of me, I have the Nuova Simonelli Mythos One. Now, this is kind of a top-of-the-line espresso grinder, and it's been getting a lot of praise over the last couple of years, because it's got some really awesome features packed in that make it a really standout espresso grinder. So, this is a commercial espresso grinder. It's got a slightly different footprint than most other espresso grinders, because there's a few different things going on in here that make it just really exceptional in terms of how it's constructed and what the results you're going to get out of it are.

Up top, we've got a 2.8 pound bean hopper. Again, this isn't really your conventional large hemispherical hopper, this is more of just a tapered hopper. It's got a shutoff here you can open and close. When it is opened and mounted in the grinder, you actually can't pull the hopper out. It's sort of just kind of a safety catch. Down below, we have a 75 millimeter steel flat burrs set, and those burrs are coated in titanium, so they are a little more hardy, they'll stay sharper and more durable for longer. And they're mounted in such a way that there's a very short path from the hopper to the burrs, and an even shorter path from the burrs out the spout into your portafilter. There's a little bit of an auger in here.

You'll also notice there's kind of this wire coming down and kind of a lot of mass in front of the burrs here, and that is because the Mythos One uses what Nuova Simonelli calls the Clima Pro Technology. Inside here is a heating element, and in the back of the grinder near the motor and on the side are two fans, so that heating element and the fans and ducting system work together in concert to keep a very, very static temperature in the grinding chamber all throughout the day, no matter what your volume is. So, first thing when you switch the grinder on in the morning, that heating element is going to fire up, it's going to get the grinding chamber between 35 and 45 degrees Celsius, and throughout the day as you start grinding coffee, let's say you have your morning rush, that sort of thing, the fans are going to kick in and they're going to try and keep it cool within that same range. And what that means for your coffee is that it's going to be a more consistent product.

Generally with espresso grinders, because there's so much friction and such big, beefy motors, and especially when you're having a lot of customers come in and order espresso drinks, you're going to see a lot of heating and, once those rushes die down, cooling as well. And that means that the metal parts are going to have some thermal expansion going on, your grind consistency is going to go up and down throughout the day. So, by managing the thermal environment where the grinding happens and where the beans are interacting with the burrs, the Mythos One is able to produce more consistent shots throughout the day, regardless of volume.

Right here we have a micrometric adjustment knob. It's very, very easy to adjust just with one hand, so you don't have to wrestle with a collar as you might in some other grinders. Really, really very easy to precisely dial in where you need your coffee to be. Down here, we have portafilter forks. There's actually an upper fork as well, so you can do hands-free, just slide your portafilter in, let it do its thing. We have the momentary switch for actuating the grinder. Right here, the spout is a little bit unique. It actually has a membrane right below the burrs, and that membrane basically looks like fingers interlocking, and they break up the clumps of your grinder, which creates a very, very fluffy, consistent grind. And the grinder trench in here as well, between the edge of the burrs, which are basically right behind this metal and that membrane, is so small that you're seeing a grinder tension of about one to two grams, almost nothing at all. Grinding is exceptionally simple. I have one of my pre-selects here, but I can choose one of my three pre-selects. These can be programmed in as well. I can also grind continuously, so if I just want to grind two seconds or so, I can. And you'll see the grind quality again is very, very fluffy. It's a little sandy, it's well-managed, there aren't very many clumps, and that means that your puck is going to be a much more consistent density as well. You don't have to do too much grooming before you're able to tamp.

Now, the North American version of the Mythos One is slightly different from the European version. Now, this is the Mythos One, the Clima Pro. The front badge does not say that, and that's an important point. All of the internals, everything is the same. Again, we have that Clima Pro Technology, but the face plate is this shield shape, and we have five buttons here, as opposed to the Europe's just three buttons, where they have a Time Down, Time Up, and Continuous Grinding, so we actually have the three presets, plus Continuous Grinding. The other really main difference is that we get a grinds tray, a removable grinds tray. The Clima Pro in Europe does not have that, it just has a flat base on the bottom. Otherwise, again, everything internally is the same, we just have some superficial differences, as well as a little bit of an increase in functionality, because we do get the settings for programmable time dosing. So, that is the Mythos One Clima Pro by Nuova Simonelli. Thanks for watching.