All good things must come to an end. At least that’s what Chaucer said. And sadly, that is true for the 2018 Specialty Coffee Expo. But melancholy aside, this year’s Expo was definitely a success. We saw a bunch of new products, exchanged numerous business cards, recorded hours of video, watched baristas compete, drank too much coffee, had too little sleep, and had a lot of fun! 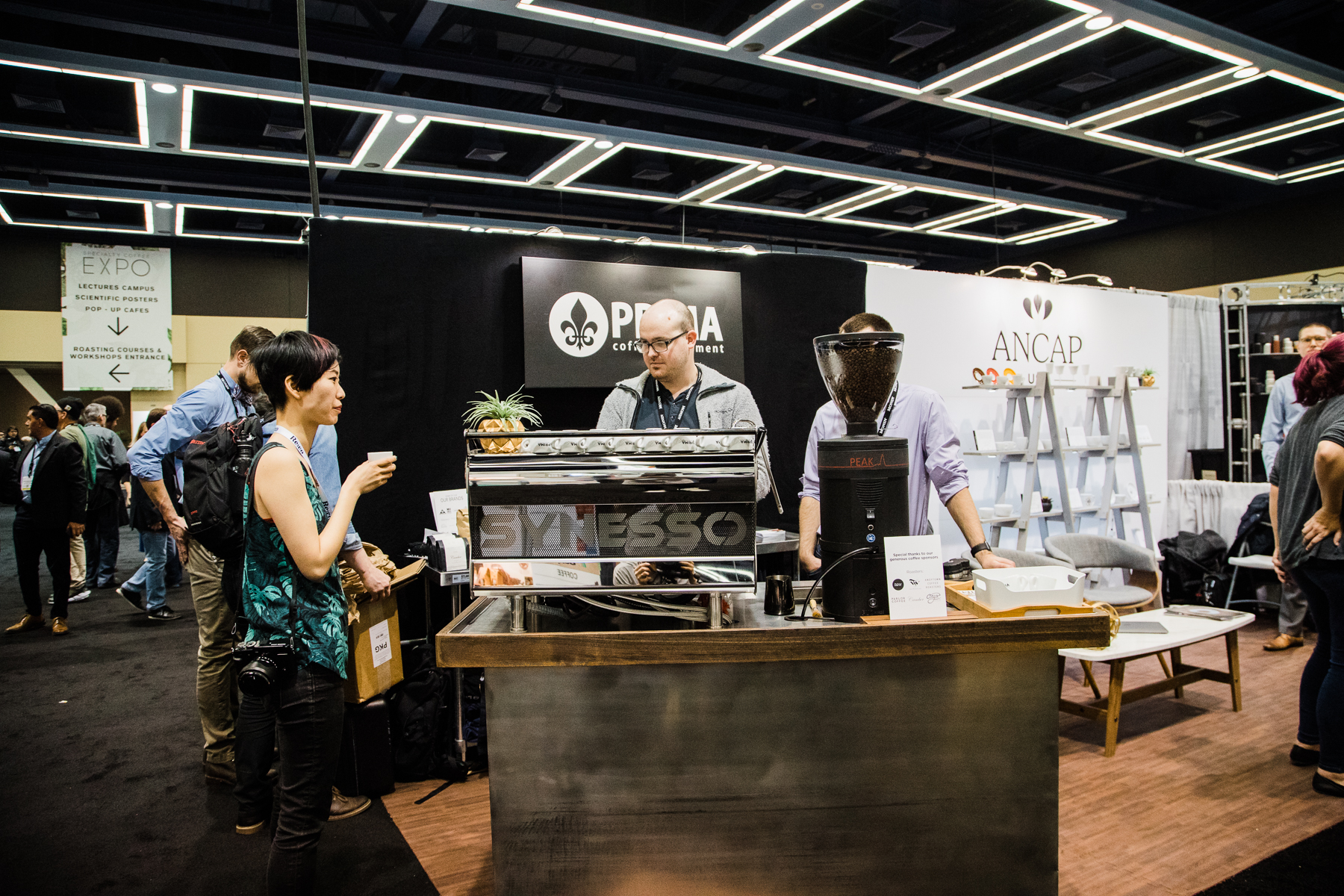 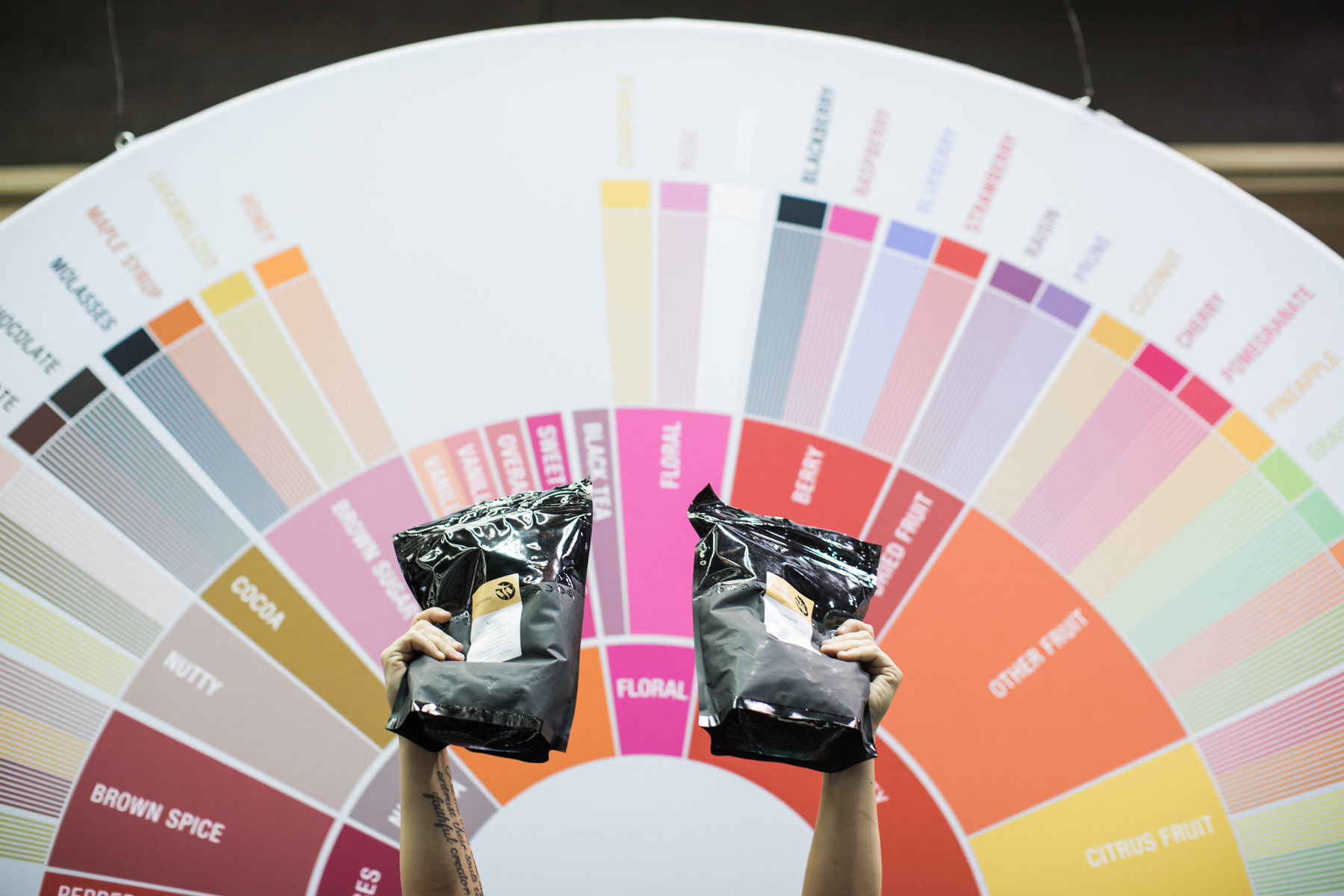 Below, you’ll find several of our favorite new products, some comments about trends that we are seeing, and a brief overview of our extracurricular activities while in Seattle. While there is so much that could be covered from Expo, we’ve sought to bring you an abbreviated version, noting some of the most important and exciting products and happenings. Also, be sure to check out our YouTube channel for videos from the event, product overviews, and more! 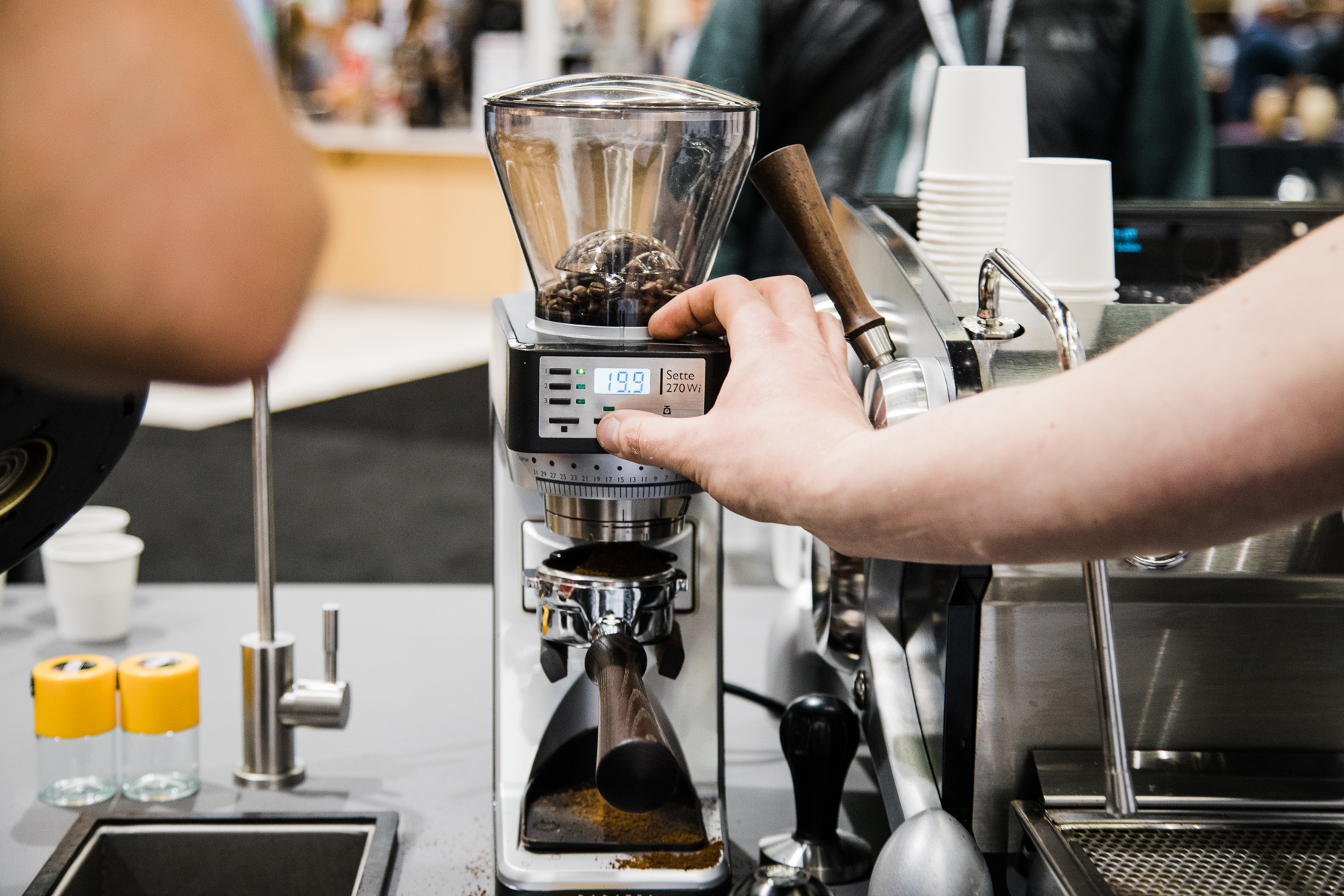 With the 270Wi, Baratza has taken the 270W and pushed forward. It’s not an entirely new machine, in that it is essentially its predecessor with improved technology, or intelligence (that’s what the i stands for). Whereas the first model needed a very stable surface to take advantage of weight-dosing, the Wi is said to alleviate that necessity. Theoretically, this could also fix the issue with heavy portafilters (>500g). Baratza has also improved its ability to adjust the offset; rather than having to modify it yourself, the software learns as you go, adapting automatically after a few doses. These changes are exciting because Baratza sought to fix a lot of the issues that many of us have had with the 270W. Grinding by weight is the way of the future, and Baratza is helping make this technology available in the home. 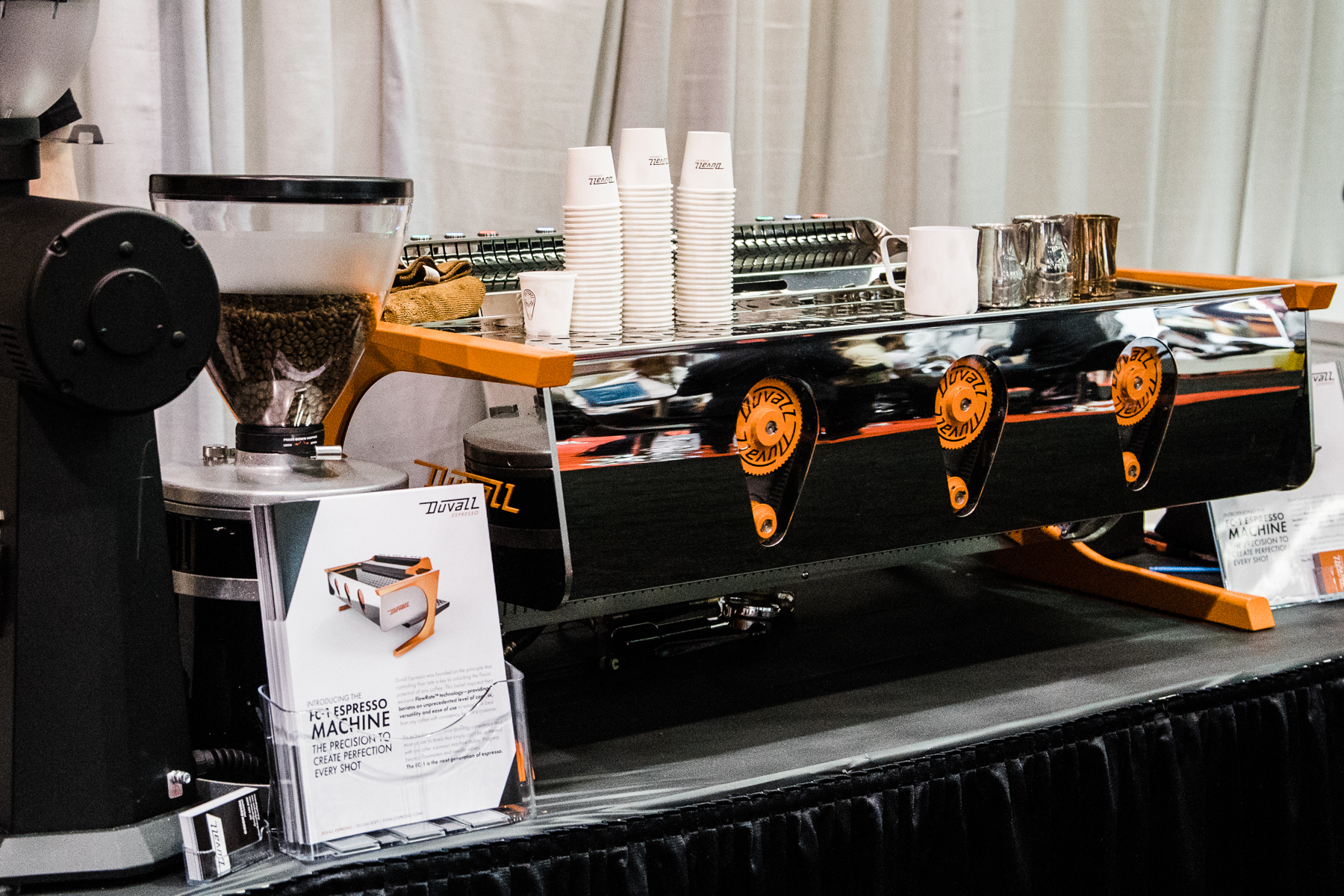 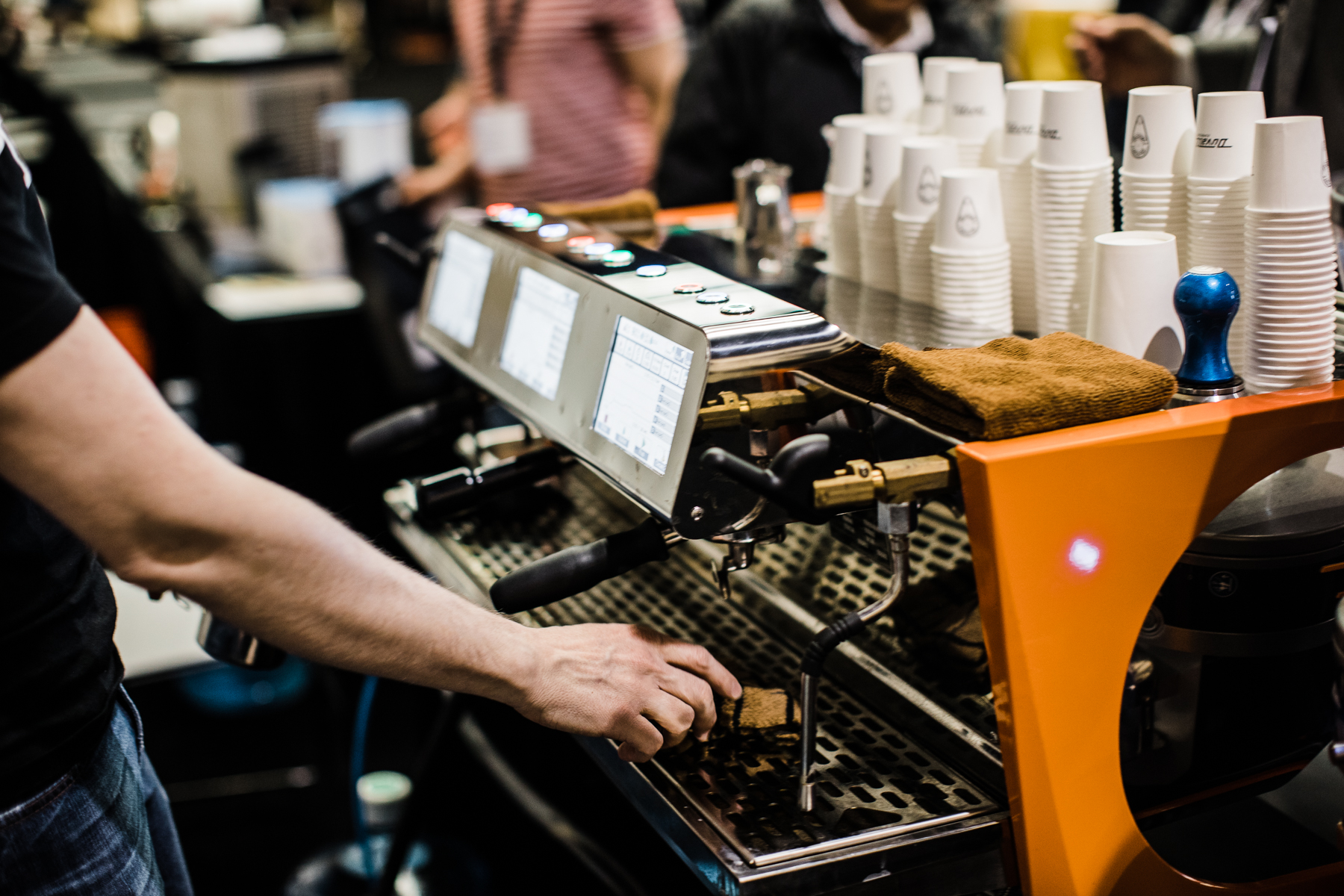 As expected, we ran into the Duvall FC-1, an espresso machine that “doesn’t care about pressure.” With it’s Smart-Pump™ technology, the FC-1 bypasses the need for flowmeters and needle valves, making it easy to determine flow rate while also governing output volume with extreme precision. On top of flow rate and volume dispensed, the barista can configure temperature, infusion time, pre-infusion pressure, pre-infusion fill rate, and dwell time. And because of its FlowRate™ technology, the FC-1 is capable of brewing your typical 9 bar espresso shot or even a 12 ounces cup of coffee without over-extraction. While Duvall’s engineering is exciting, the looming question is whether or not that kind of control is desired, or even necessary. And although a number of manufacturers seemed pretty interested in the FC-1, we question whether or not the learning curve that comes with it will deter this type of technology from being implemented across the industry. 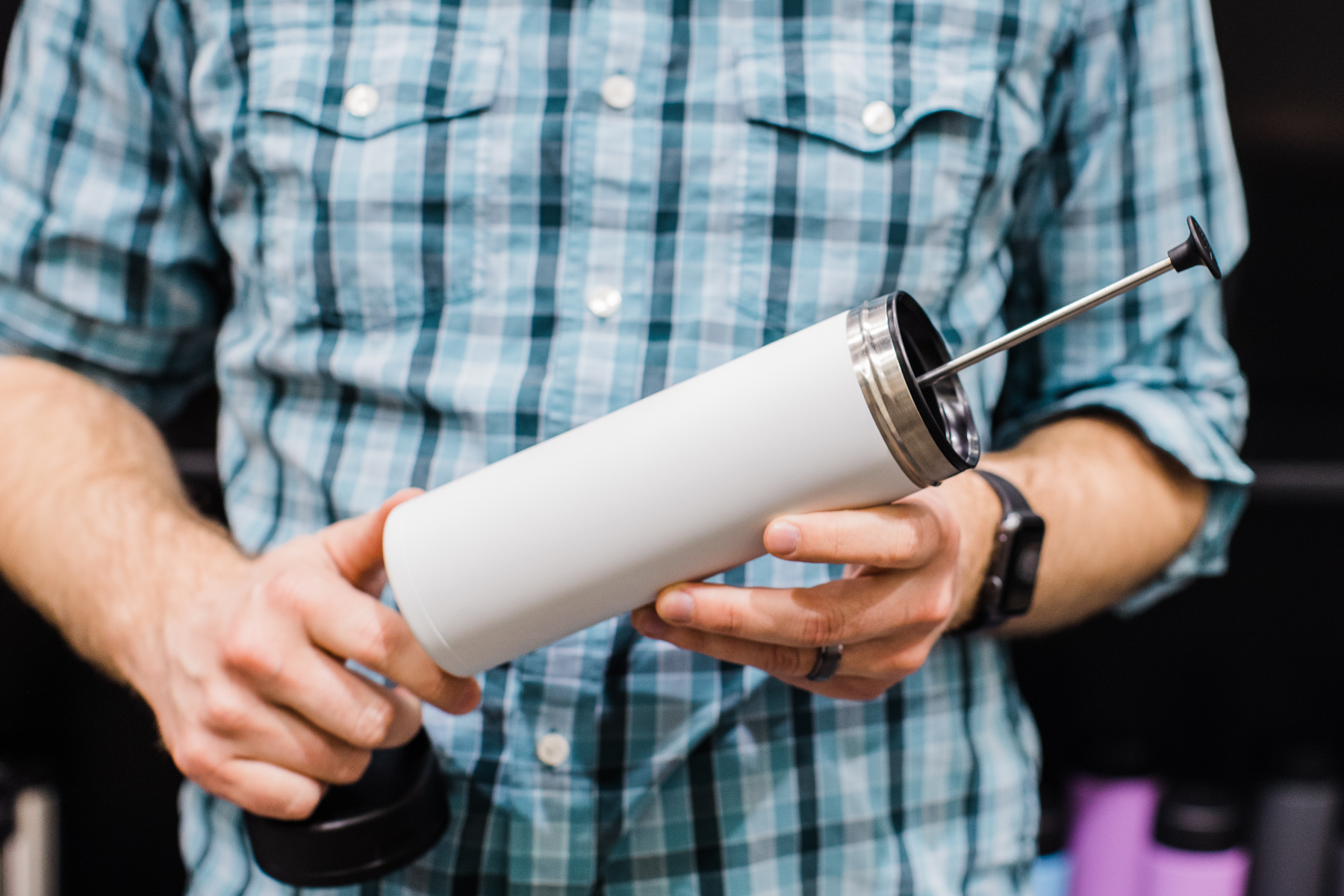 If you are a French presser, you’re probably familiar with Espro, a Canadian company who redesigned the French press to include a double filter that significantly reduces sediment. Although they already have a few different models, the Ultralight is a great addition. The Espro Ultralight is the lightest 16oz vacuum insulated French press and hydration bottle in the world. What is unique about the Ultralight, when compared to the Travel Press, is that the lid and double-filter plunger are two separate pieces, allowing the user to remove the plunger and use it as an insulated hydration bottle, keeping hot drinks hot and cold drinks cold. The Ultralight was, in fact, super light, right around 8 ounces. But that is not at the expense of quality. Espro was able to reduce the stainless steel thickness in a few areas that didn’t need it, resulting in a lightweight bottle that will last a long time. 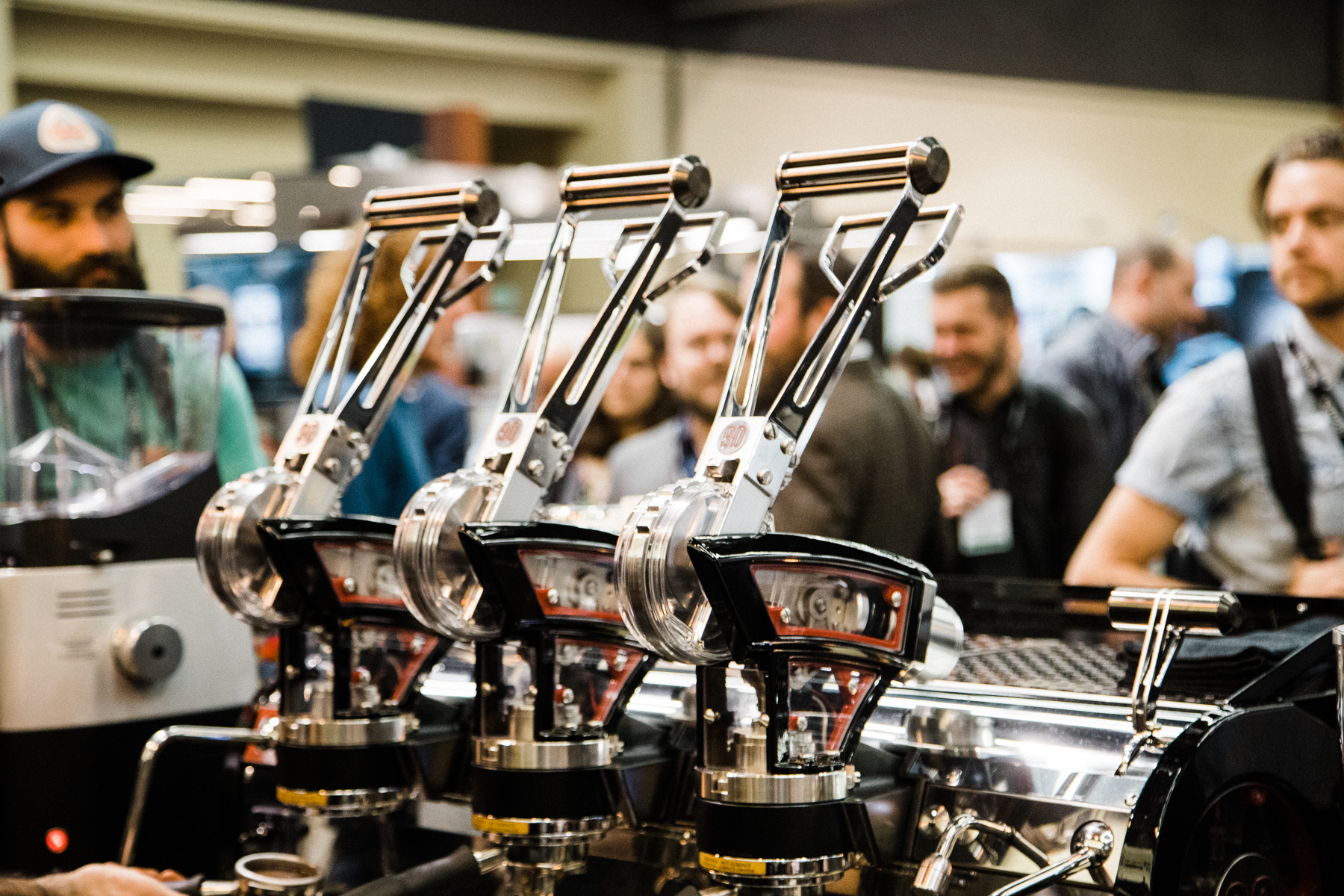 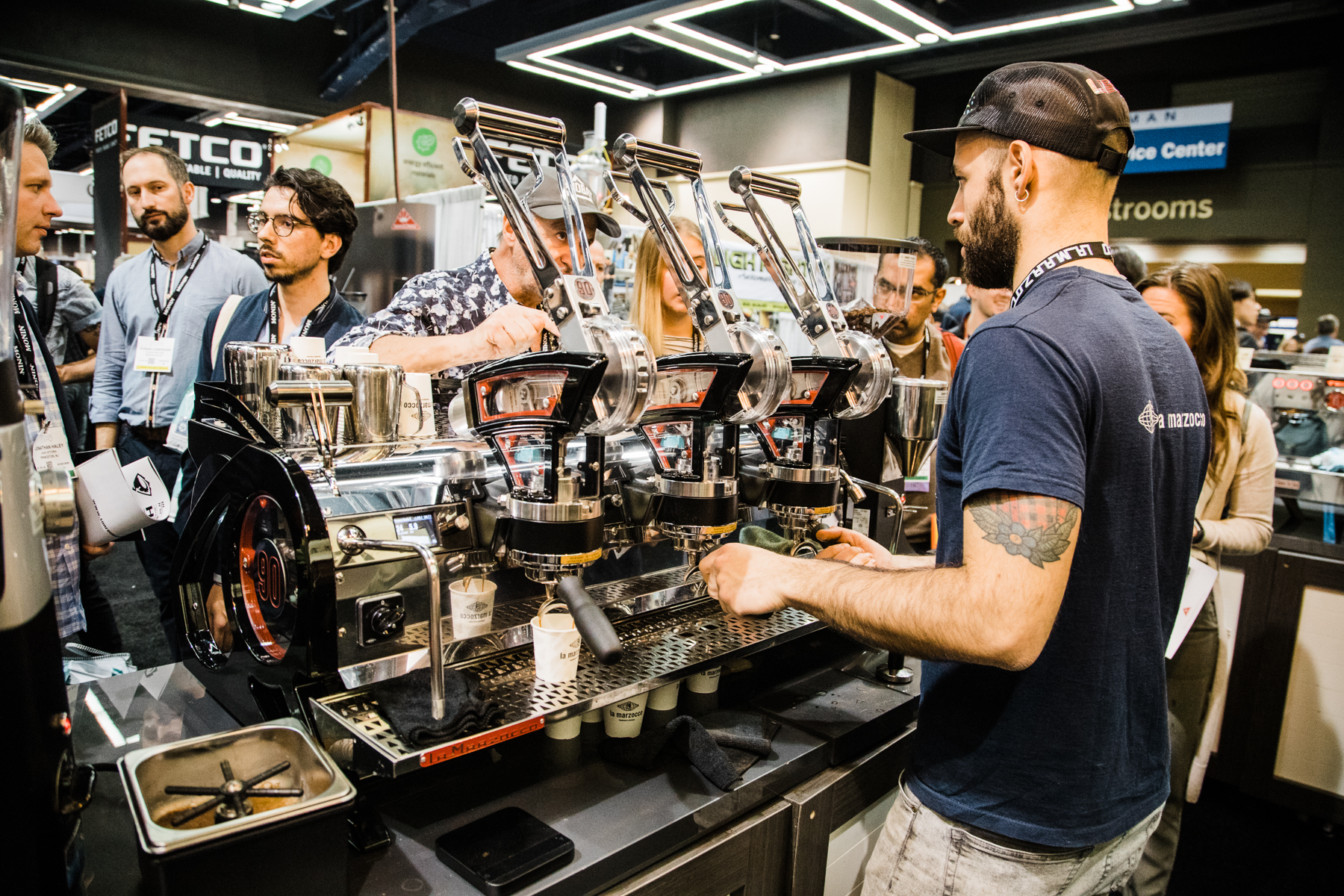 With old school vibes and new tech jives, the La Marzocco Leva is a captivating machine. It has a redesigned group, featuring a spring lever that has a clutch system, allowing you to choose from 6 different engagement points, without the fear of being hit in the face when flushing an empty group. The barista is able to participate in pre-infusion pressure, shot volume, and extraction pressure. It’s available in two models, X and S, and the Leva X has live pressure visualization, independent boilers, a military-grade steam potentiometer, and Smart PID. The La Marzocco Leva was definitely a sight for sore eyes, but whether or not this type of machine is necessary is up for debate. While it is capable of producing quality shots, repetition is difficult, and lever machines can be quite burdensome in busy cafés. 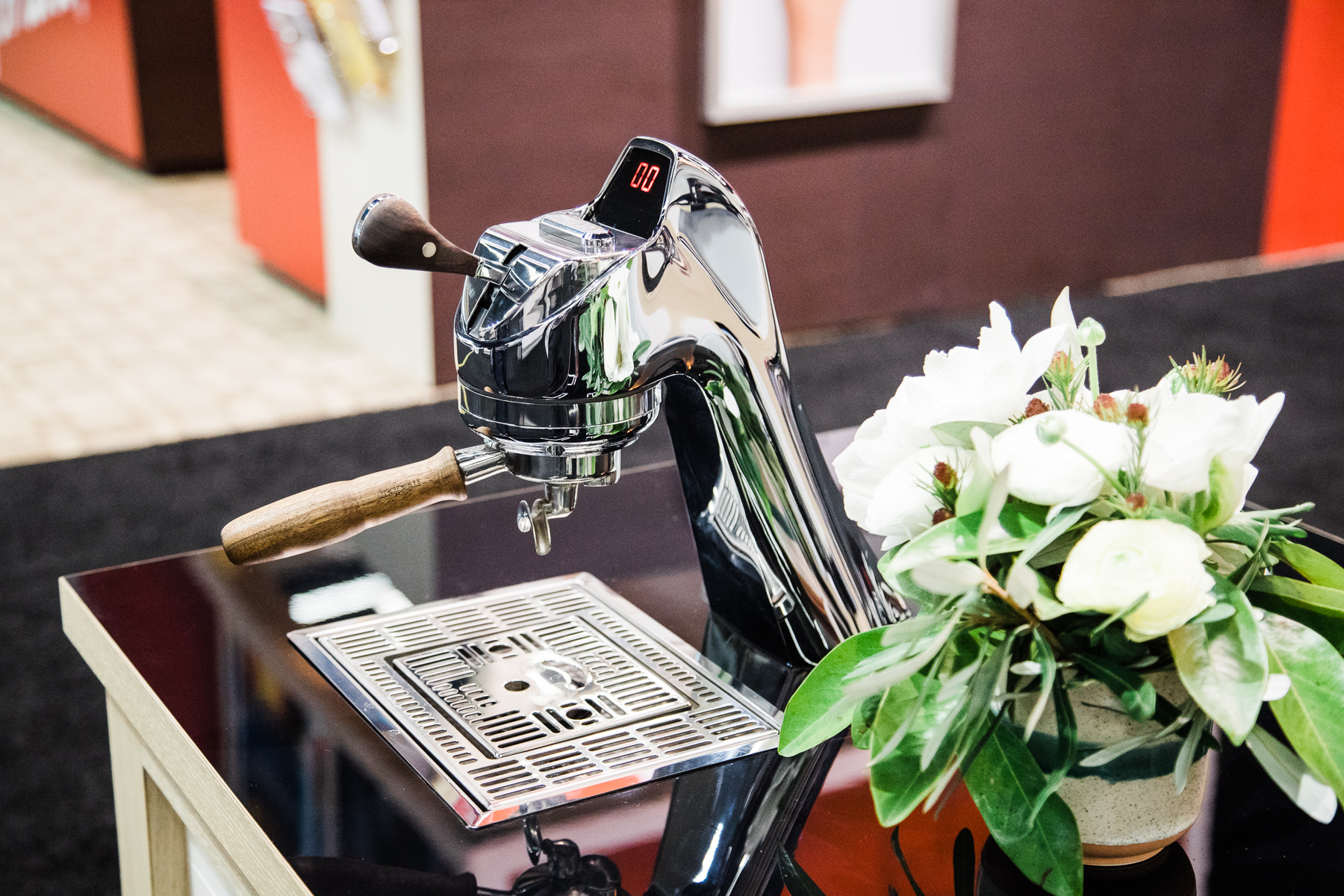 The Modbar AV got lots of attention at SCA. Every time we walked by, there were tons of people circled around their booth. But the excitement wasn’t unwarranted. After a number of years of research and development between Modbar and La Marzocco, many of us were excited to see what they had up their sleeves. The result is the Modbar AV, which is basically a Linea PB in a Modbar body. It features exceptional temperature stability, a multi-positional programmable lever, multiple dosing options, as well as auto back-flush and rinse programs. On top of that, ABR scales can be added post-installation, allowing baristas to brew by weight or by brew ratio down the line. Modbar’s minimalist aesthetic is beautiful, but mixing that with an integrated digital timer and the ability to brew by weight make it even more attractive and practical for speciality cafés. 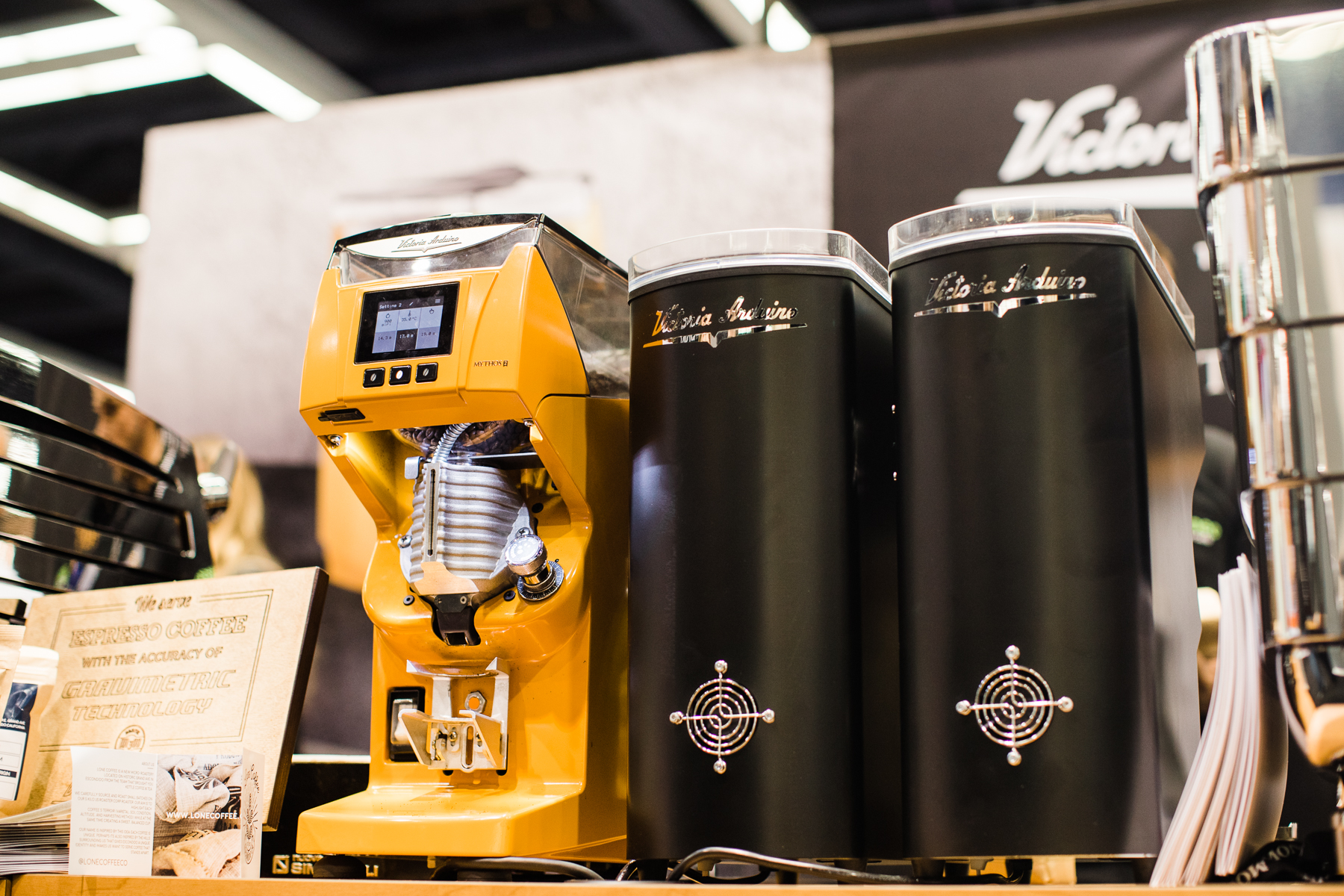 Unlike the Modbar AV, the Mythos 2 didn’t get as much attention as expected. Nuova Simonelli seemed to give precedence to their espresso machines this year. I mean, if it wasn’t school bus yellow, it probably would’ve been overlooked by most passersby. However, we did learn that there are going to be 5 models coming to production: 3 for the Victoria Arduino brand and 2 for Nuova Simonelli. While all 5 models will see significant improvements, including enhanced temperature control and stability, only one Victoria Arduino model will be equipped with gravimetric technology, allowing baristas to dose by weight. And although that model will take about 6 or 7 seconds to zero out a portafilter, it only takes about 2 seconds to grind a dose. We are thrilled to see gravimetrics coming to commercial grinders, but there is still a lot of ground to cover in this area. 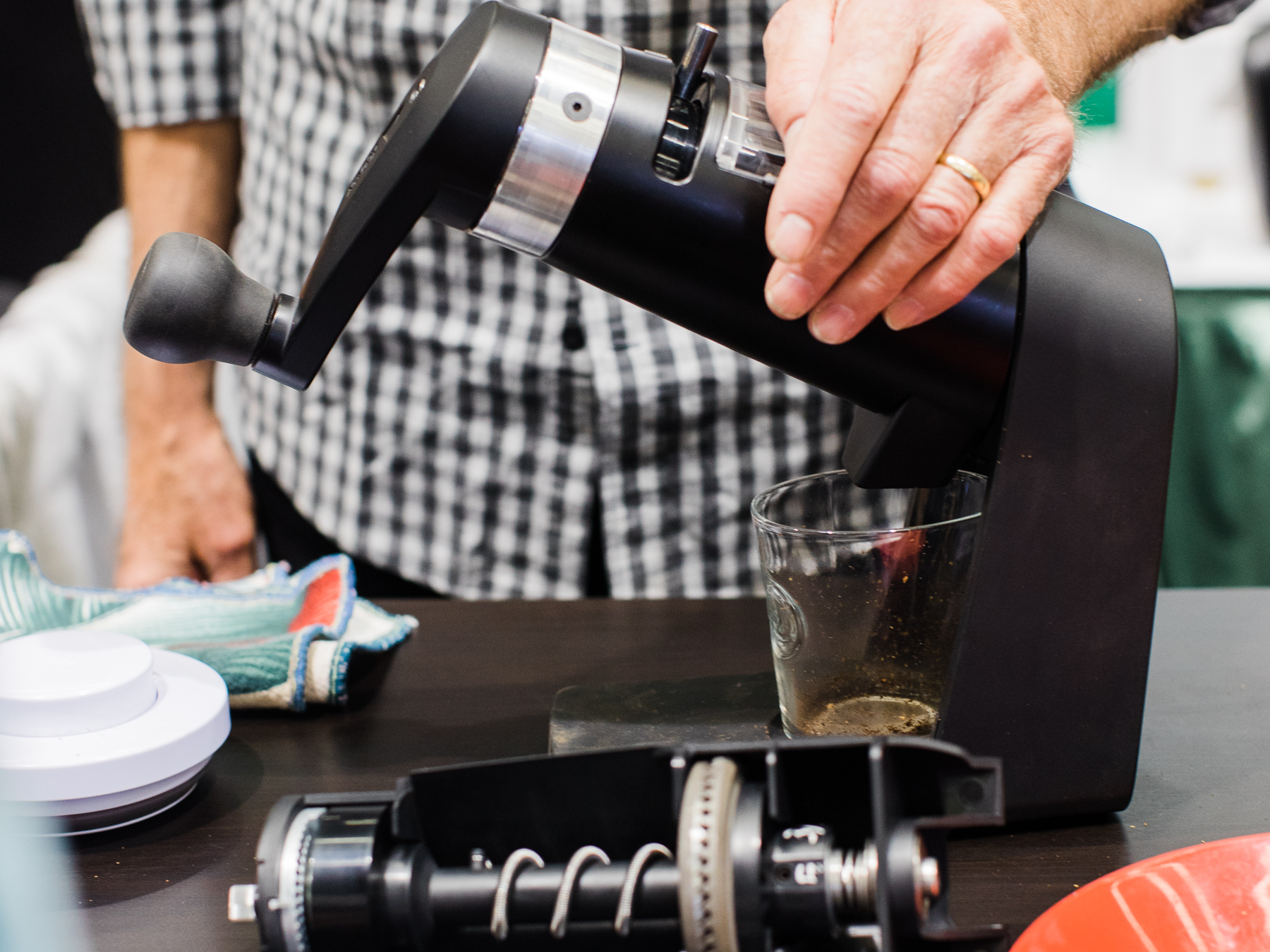 After getting to talk with one of “The Orphans,” as the husband and wife duo are often called, we were left feeling more excited about the Apex Hand Grinder than before. While we already knew about its 75mm ghost burrs and its redesigned shape, we were able to get a better understanding of why these decisions were made. Apparently, the ghost burrs have not been popular in America primarily because they have always been used at higher speeds, resulting in uneven particle distribution. However, as a hand grinder, manually turning the handle is much slower, resulting in a more even grind with better fines integration. Furthermore, the redesigned shape was not simply a desire to go against the grain; rather, it was intentional, pushing for improved particle distribution and ergonomic superiority. The Apex grinder is not yet in production, though the hope is that they’ll be available in time for the holiday season. 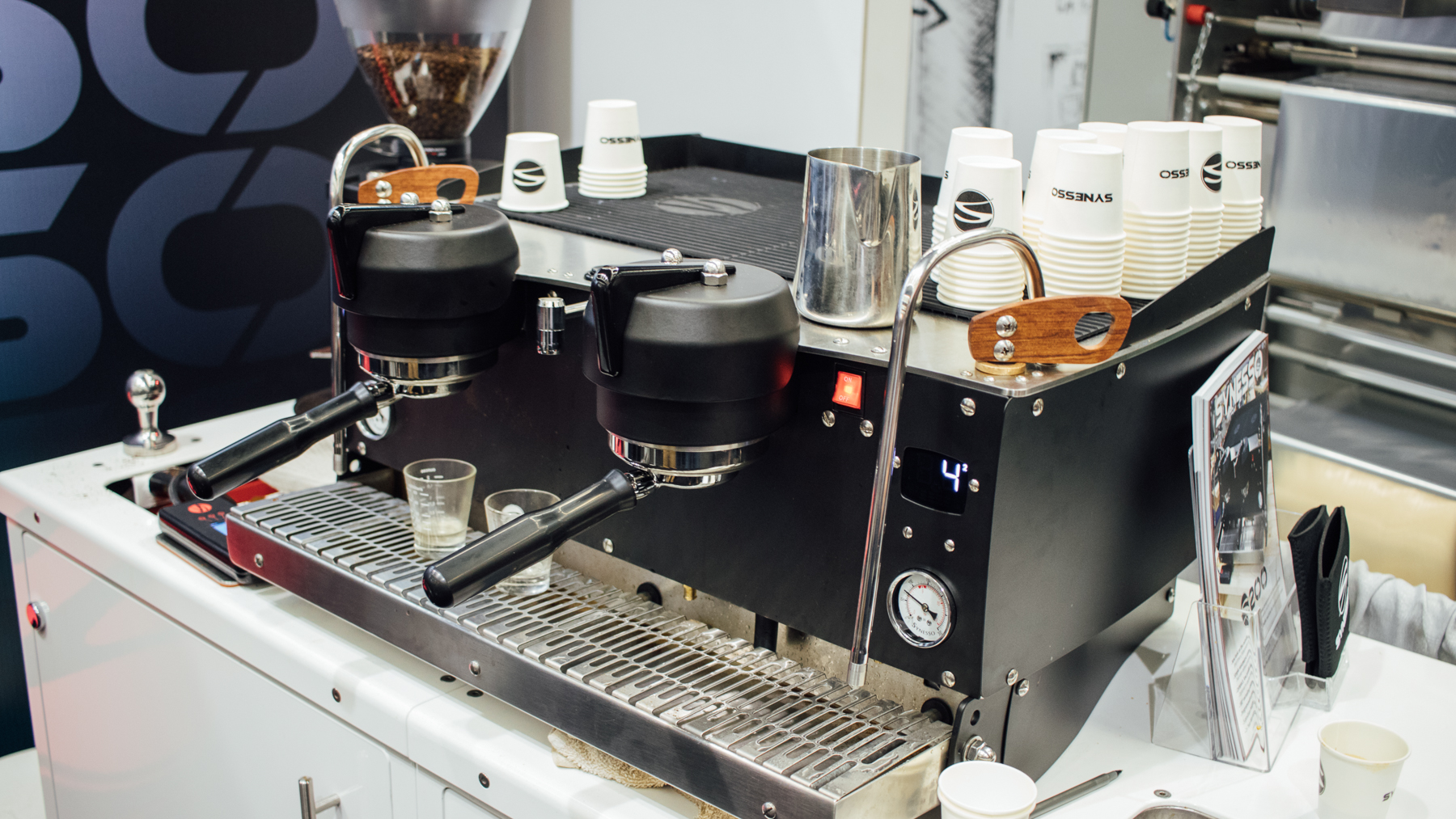 Synesso came ready to excite attendees with the S200. Although simpler than other Synesso machines, like the MVP Hydra, the S200 has all the necessary bells and whistle for a busy cafe without breaking the bank. It’s has programmable volumetrics, allowing you to adjust two presets per grouphead as well as the arcade-style buttons for purging and hot water. On top of that, it has a steam boiler and dedicated group boilers that maintain a very stable temperature. This amount of quality at a more accessible price is something the industry has been needing for some time. The release date for the S200 is not yet set, but the hope is for September of this year. However, if you’d like to snag a place in line for your very own, our pre-orders are available now! 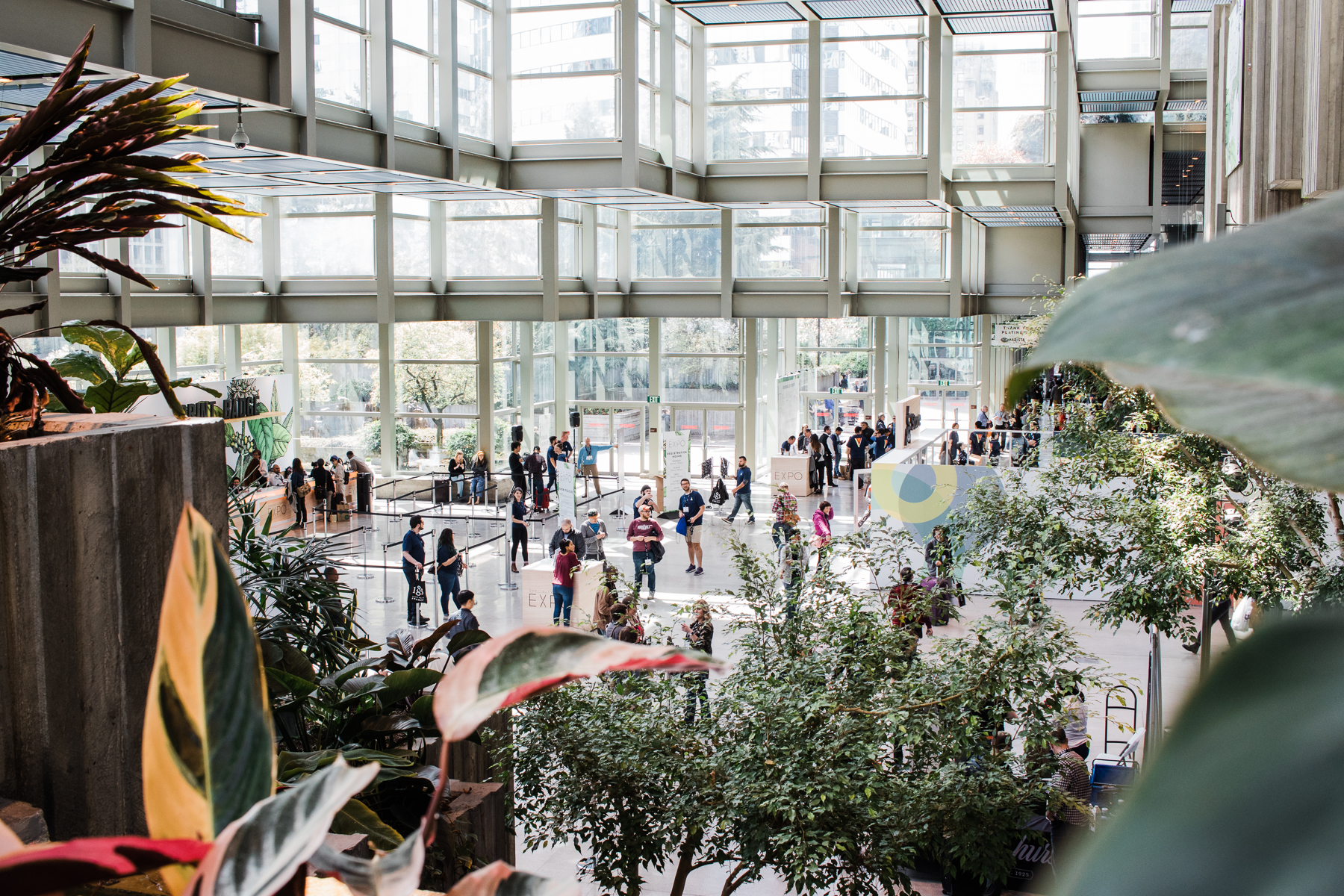 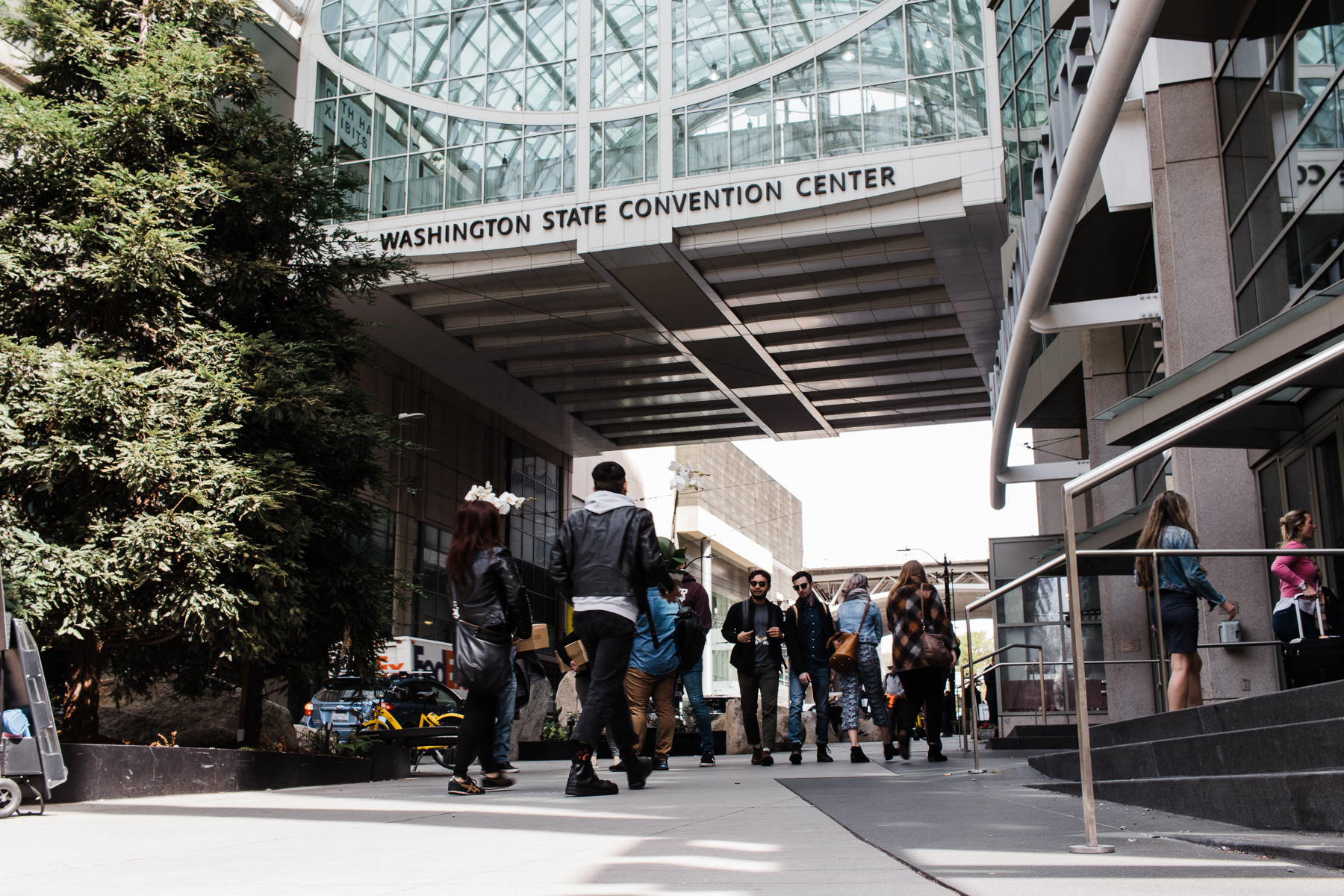 Like Ricky Bobby’s dad, trends come and go. And this year, we’ve noticed movement in the areas of roasting, grinding, brewing, and marketing. When it comes to roasting, there has been an uprise in new roasting technologies, reducing roaster footprints while implementing more built-in tech. Who knows what this will mean in the future, but giving more control and versatility to small-scale roasters, albeit with higher upfront costs, is exciting.

Regarding coffee grinders, we’ve seen continued movement toward the ability to dose by weight. As mentioned above, we’ve seen improvements with Baratza’s Sette 270Wi and Nuova Simonelli’s Mythos 2, but there is still a lot of room for growth in the industry, especially with commercial grinders. The focus has been primarily on improving burrs, reducing retention, improving adjustment precision (some grinders are utilizing stepper motors to adjust burr distance), and responding to barista needs (e.g., single dosing, small hoppers). All of which are important and necessary. But we are looking forward to what the future holds in the territory of grinding by weight. 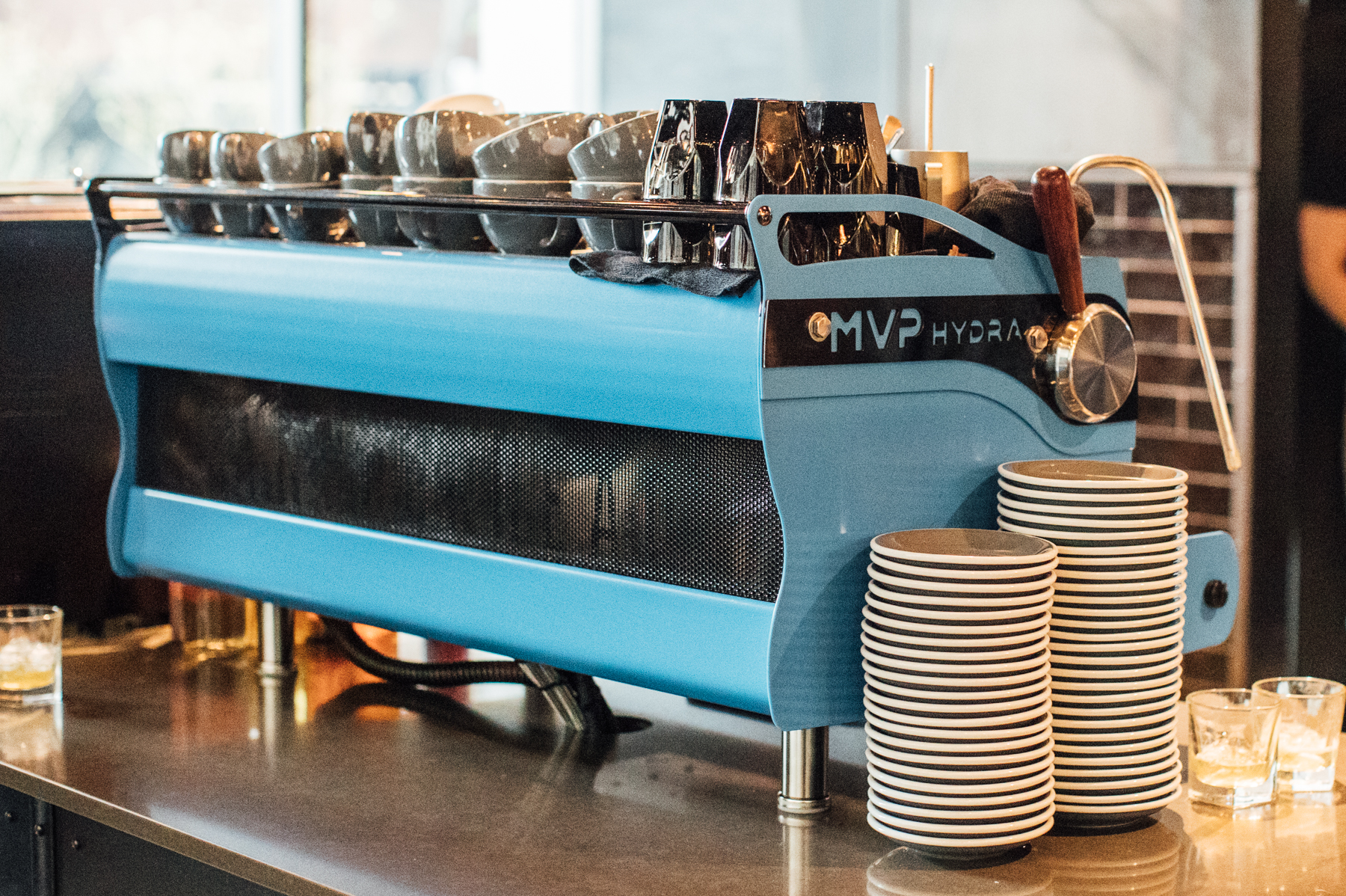 Commercial Espresso machines have been both pushing boundaries and reining in. There are high-end machines, like the Duvall FC-1, that are trying to approach things in an entirely new way, and there are more budget-conscious options, like the Synesso S200, that are implementing some existing features in a more modest package.

Finally, we are seeing changes in the way that consumer products are becoming readily available. Though not very surprising, crowdfunding is lessening the importance of big product releases at major events, like Expo. It’s becoming far easier to market and fund products online over 30-60 days than it is to buy a booth for a weekend in Seattle. We did see a few successfully crowdfunded products make an appearance at SCA, like the Espro Ultralight and the Alpha Dominche Flask, but they weren’t necessarily new to most of us. 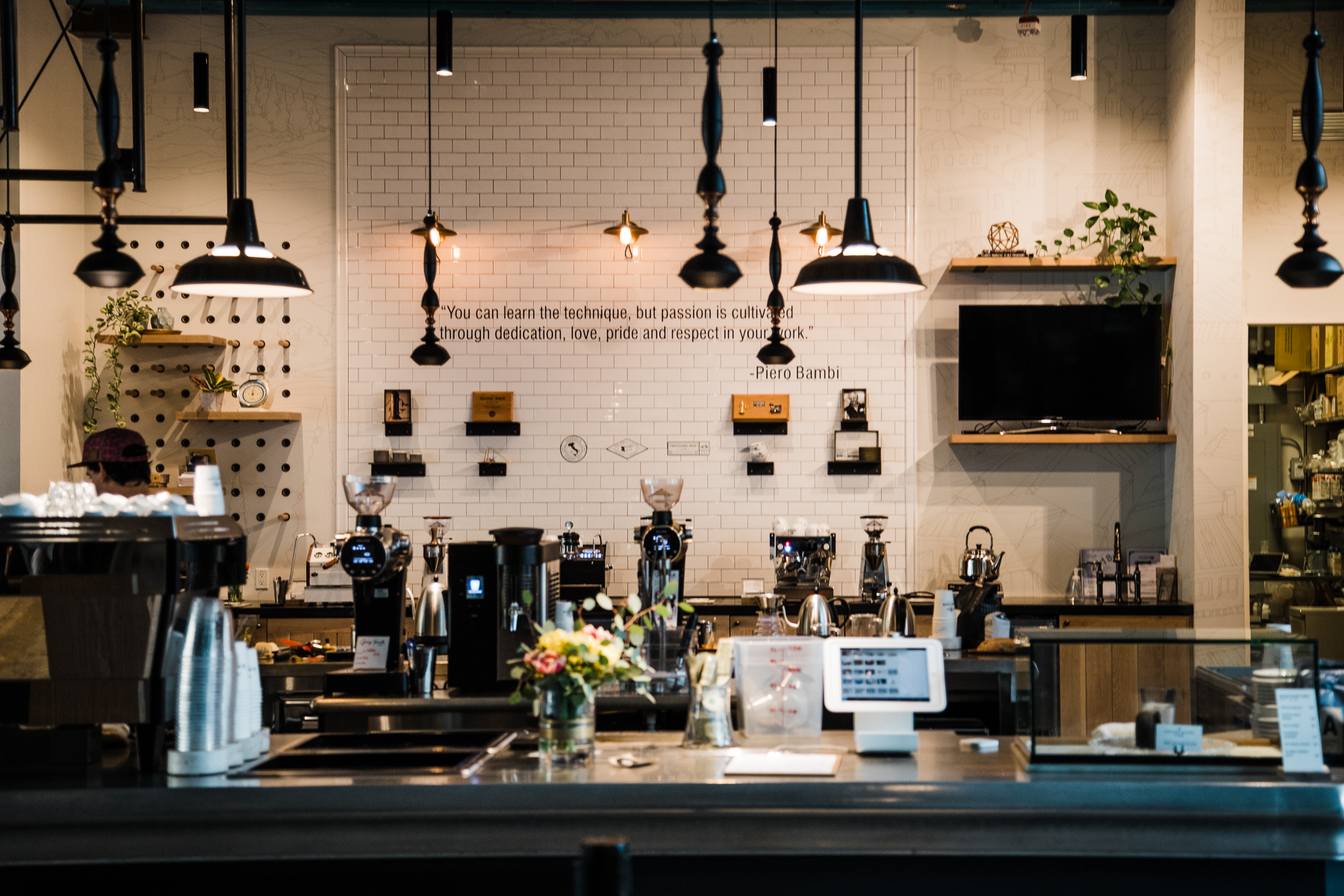 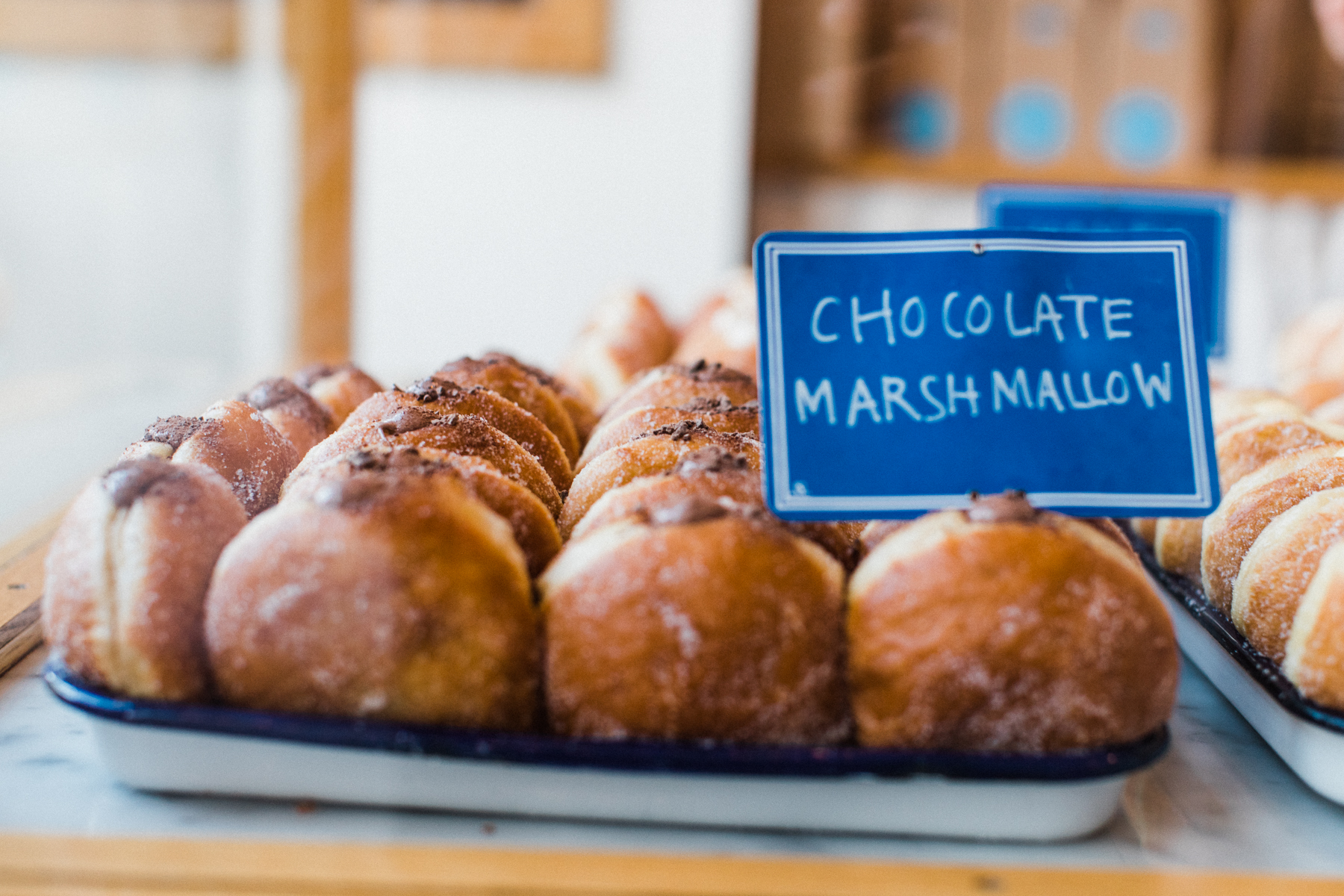 Outside of the event venue, we loved visiting Seattle, making efforts to hit up Cherry Street Public House, Elm Coffee Roasters, the La Marzocco Cafe, and General Porpoise Doughnuts. Those are some of our favorite haunts, so we couldn’t pass them up.

Oh! And we can’t forget pizza. Craft pizza is a Prima Favorite. We indulged, to say the least. We hit up both Serious Pie and Humble Pie. Personally, Serious Pie’s crust and sauce were a tad better in my book, but Humble Pie’s happy hour (Margherita pizza for $6!) is a straight-up steal! In fact, Humble Pie’s happy hour brought us back a second time on this particular trip; pizza and beer for $12 in Seattle is like winning the lottery. 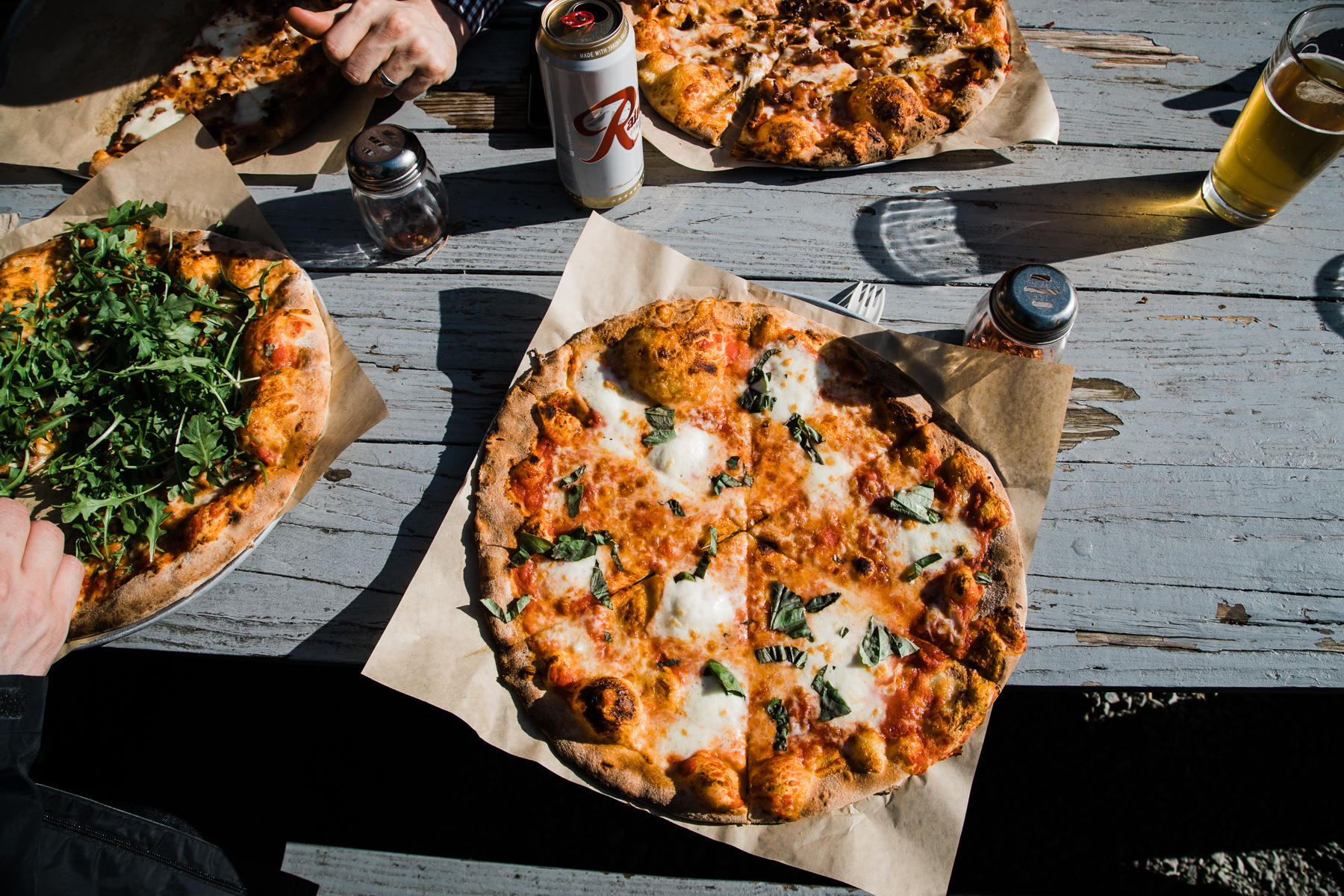 We also visited a few new-to-us places, including Liberty, a bar in Capitol Hill that makes incredible cocktails and has some of the most fantastic employees. Another new-to-us place we checked out was Anchorhead Coffee, a beautiful café on 7th Avenue, which is where the Synesso Mocktail Party and the Expo Board Game & Pizza Night were located.

When long days on our feet made us want to be hermits, we also found immense joy in the sweet VHS collection that our Airbnb had to offer.

Truly, there is much to be excited about in the world of specialty coffee. And even though the 2018 Coffee Expo has come to an end, we can look forward to the 2019 Expo. To get to the better interpretation of the Chaucer quote above, good things must end so that better things will come.

See you next year, Boston.