Welcome to the second of our two part guest barista review on the Kalita Wave pour over method! Last week, Collin Moody of Cafe Streets reviewed the 155 Series for us. John spent time on the 185 series for us, discussing his brewing method and the difference between the Wave's flat bottom geometry and conical manual brewers.

Welcome to the second of our two part guest barista review on the Kalita Wave pour over method! Last week, Collin Moody of Cafe Streets reviewed the 155 Series for us. John spent time on the 185 series for us, discussing his brewing method and the difference between the Wave's flat bottom geometry and conical manual brewers.

On the surface, the Kalita Wave Series of coffee drippers looks and seems fairly similar to other coffee drippers out there: They come in ceramic, glass and metal versions; have a somewhat proprietary filter that works with the particular shape and features of the dripper; and, given the coffee industry's current state of affairs, seem to be yet another in an ever-growing list of brewing toys... er, tools... to obtain and use. I'll give a full disclosure here, though, and state here and now that I am undoubtedly one of those coffee industry nerds who will put a dent in my wallet in the name of "coffee research," all the while grinning over the thought of trying out the latest and greatest toy.

Some months ago, back in the Spring, I believe, I saw a picture of the metal version of the #155 size Kalita Wave dripper. No one in the States had yet obtained the rights to import and distribute the Wave drippers, so, much to my chagrin, I could only sit in jealousy and ponder what made the Wave drippers so different from everything else out there. Therefore, when Wrecking Ball finally did begin distributing them, I immediately bought a #185 size metal dripper and some filters so that I could go to work and see what the excitement was all about.

I was not in the least bit disappointed; in fact, I was quite pleased. I used the parameters recommended by Nick Cho -- roughly 42 grams of coffee, 700 milliliters of water -- but deviated from the pulse-brew he advocates and went instead with a straightforward, continuous-pour technique, all the while aiming for an extraction time of about 3 minutes, 30 seconds. Generally, I found the brews to be clean, sweet, and, if this makes sense, uncluttered while still having complexity.

When my friends over at Prima Coffee decided to carry the Wave Series, I jumped at the chance to review the #185 size. Having already played with the metal dripper for some time, I was anxious to get back into the lab -- my kitchen at home -- and see if I could discern a noticeable difference between not only the Wave drippers themselves, but also the other manual pour-over methods out there. Of course, being anxious to do experiments and actually carving out the time to do them are two very different things, and, much to my guilt and chagrin, I kept putting off the experimenting I needed to do. In the meantime, though, I was still able to brew quite a bit with the various Wave drippers, and I think it fair to say that I was not disappointed. I usually kept my batch-sizes between 30 grams of coffee, 500 milliliters of water and 42 grams of coffee, 700 milliliters of water, though I did occasionally go higher to 60 grams of coffee and 1 liter of water. 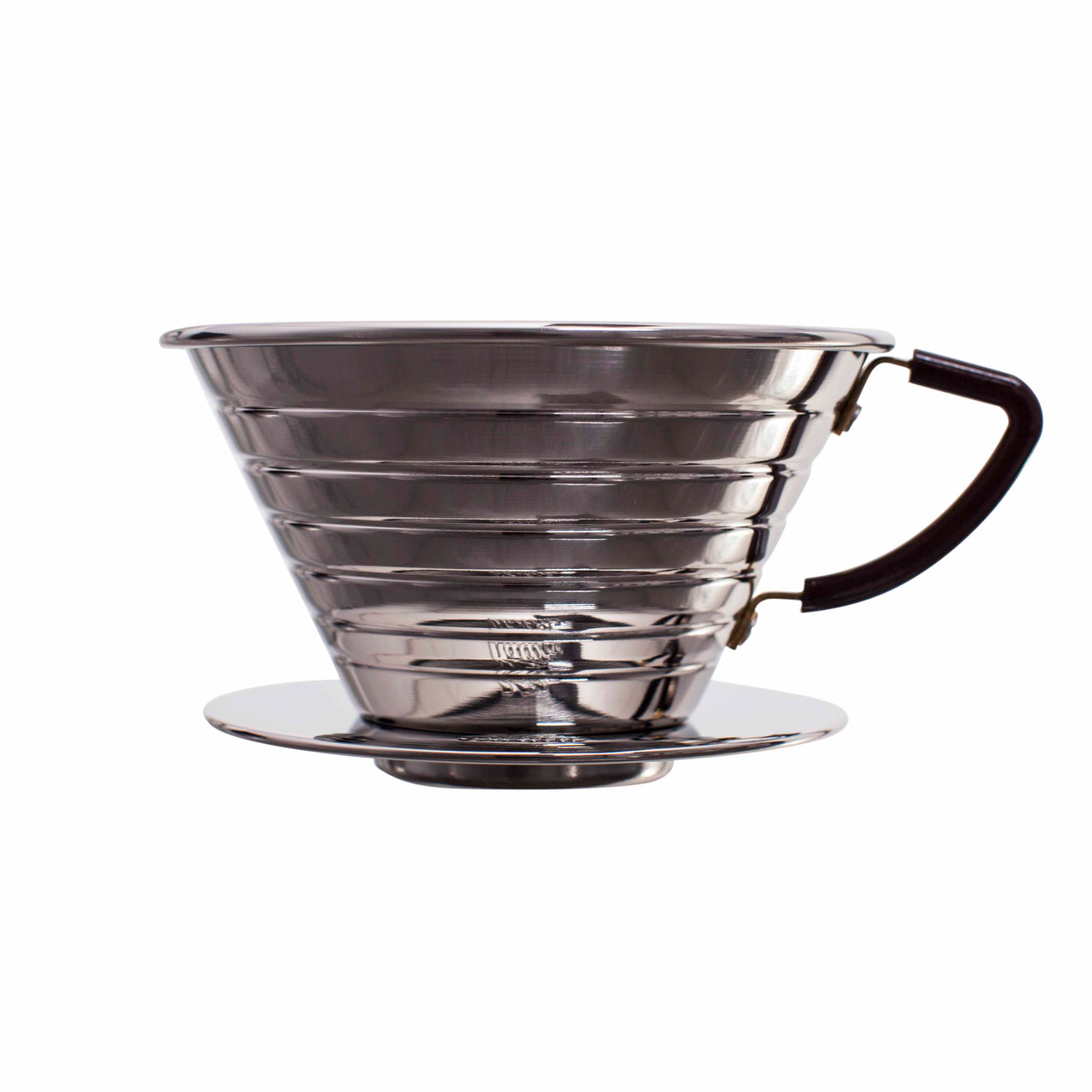 In my casual, not-experimental brewing, I had a few practical observations. First, the paper filters, which are shaped like muffin cups, definitely need to be pre-rinsed carefully as they will easily lose their shape unless the rinse water is poured gently and carefully. Second, careful storage of the paper filters is also a must, as they will lose their shape and get floppy unless held together so as to keep the filter walls nearly straight and upright, which is key in keeping the shape intact during the pre-rinsing process. Trust me, you don't want floppy filters! Third, the #185 size definitely has a sweet spot as far as batch size goes, and I think it is right in that 42 grams of coffee, 700 milliliters of water range. If you're looking for a single pour-over brewer that does, say, just a single, small cup of coffee but will also go all the way up and do a full liter, I'll go out on a limb and say one doesn't exist that does the entire range well.

Now, when I finally got down to doing a series of experimental brews, the first thing I wanted to do was compare it to the Hario V60 02, since that's probably the most commonly used manual dripper out there at the moment, and because the 02 size is comparable to the #185 size Wave dripper. The V60's draw-down time is very, very fast due to the large hole at the bottom and, unlike the Chemex, another popular V-shaped pour-over device, has a thinner filter as well as ridges along the side, both of which speed up the draw-down time. The Wave, however, has three relatively small holes on the bottom, sized similarly to a Melitta dripper, which significantly slow down the draw-down time. Practically speaking, the V60 is a much more pour-dependent brewing device, which means it is less likely to be repeatable, brew after brew.

The second thing I wanted to do was to compare the various #185 size Wave drippers. The ceramic, glass, and metal are all very pretty to look at, but I wanted to know if they worked differently. The biggest possible difference I saw would be in their heat-retention properties, and so I made sure I had out my digital thermometer while I brewed a lot of batches of coffee. My findings? Well, to be honest, I couldn't really see a difference between the three, nor could I taste one. I logged a fair amount of data and spat out a lot of coffee, but there wasn't enough clear deviation one way or another to conclusively say that any one dripper had better -- or worse -- heat-retention properties. I think a part of this is due to the fact that the filters themselves move the coffee slurry away from the walls of the dripper, thus allowing air to be an insulator to keep the drippers themselves from sucking away any heat from the slurry.

As I conclude, I'd like to go back to the idea of the #185 series having an ideal batch size -- roughly 42 grams of coffee, brewed with 700 milliliters of water. Without getting too technical, this, I believe, is inherent to the design of the drippers and filters, and has a lot to do with bed-depth and ideal extraction time. The Kalita Wave Series does a very, very good job of allowing close to ideal conditions for extraction, and the #185 size works quite well for those wanting two to three cups at a time.

John serves as lead roaster for Quills Coffee in Louisville. John's interest and passion for specialty coffee has helped to raise the quality of coffee and coffee bars in Louisville, and he was a forerunner and resource for many of us here in town. You can follow John at @hermitudinous and be sure to check out his blog for all things coffee, espresso, and roasting at hermitudinousdotcom.