As we observed in a previous post, the 21st century is witnessing a remarkable truce between all things artisan and all things automatic. Two movements – the “do-it-yourself” and the “already-done” – progress rapidly toward the same goal: an excellent brew. State-of-the-art machines continue to wow the world of coffee, but manual brewing hasn’t seemed to take a hit. It’s actually picking up speed.

As we observed in a previous post, the 21st century is witnessing a remarkable truce between all things artisan and all things automatic. Two movements – the “do-it-yourself” and the “already-done” – progress rapidly toward the same goal: an excellent brew. State-of-the-art machines continue to wow the world of coffee, but manual brewing hasn’t seemed to take a hit. It’s actually picking up speed.

Recently, the folks at Bonavita have led the charge for innovative and affordable brewing solutions, and their latest development continues to impress. Infusing robotic precision with human discretion, Bonavita’s new variable temperature electric kettle adds a measure of convenience to the highly involved process of manual brewing. To the barista’s delight, temperature control just got a lot easier.

Like Bonavita’s original electric pouring kettle, the variable temperature model heats water quickly: one liter in the gooseneck kettle comes to a boil in less than five minutes. But unlike its predecessor this version allows the user to select a target temperature, either by viewing a list of presets or making a specific choice themselves. Once reached, the temperature is maintained for up to an hour. A digital control panel and cordless design made this kettle a useful and welcomed addition to our lineup.

To get acquainted with the variable temperature kettle, we ran a series of tests with the 1.7-liter small-spouted model. While varying in size and spout style, it sits on the same base and contains the same electronics as the 1.0-liter gooseneck kettle, so we expect similar results between the two. 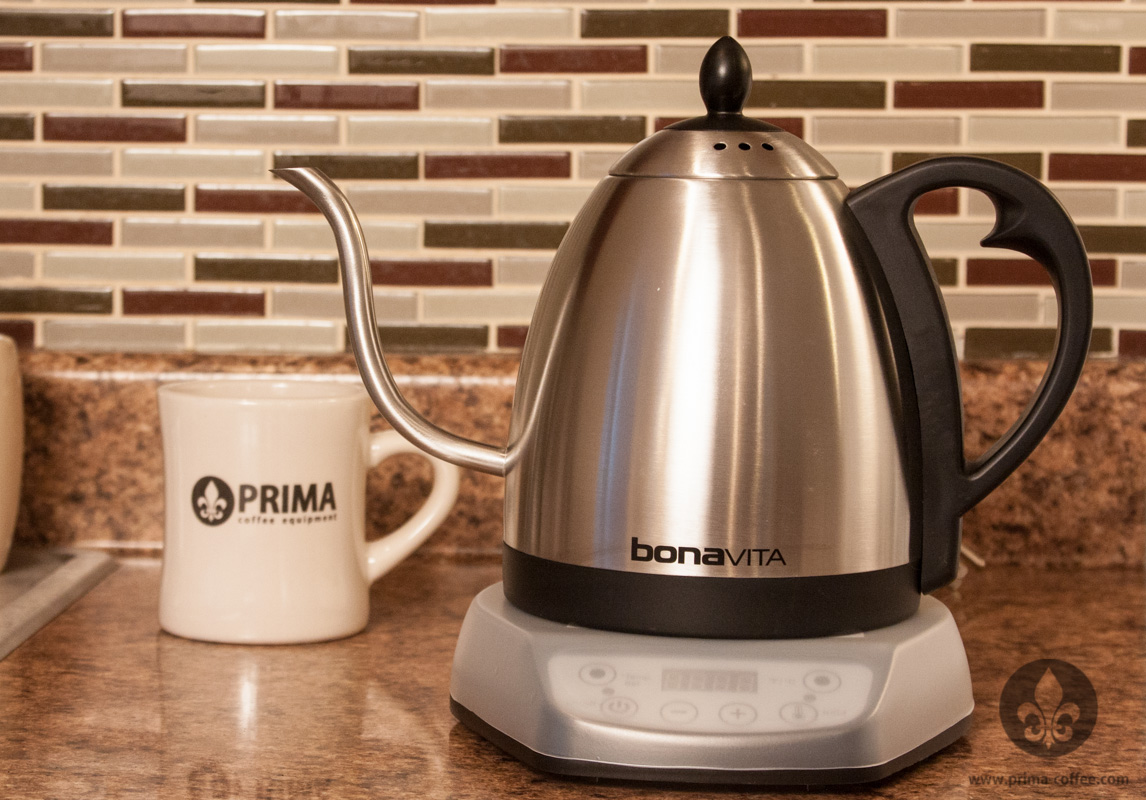 How long does it take to heat?

How long does it hold heat without activating the hold feature?

By how much does it miss the target temperature when heating?

While holding, by how much does the actual temperature vary with the target temperature?

Filled to maximum capacity with 65°F water, the 1.7-liter kettle took just over eight minutes to heat its contents to 200°F. Once the water was within 10° of our selected temperature, the element began turning off and back on in regular intervals – heard with audible clicks – to avoid overshooting. This offers a dramatic improvement over other variable temperature kettles that we’ve used, in which the element stays on right up to the target temperature and the water is way overheated.

The real magic happened once the desired temperature had been achieved. When the hold feature was activated, the heating element automatically toggled on and off to maintain our target temperature within 1-2 degrees. (The variance while holding was hardly significant: -2° and +1°.) Even without the hold activated, the kettle sufficiently insulated its contents during our tests: water temperature dropped at a slow rate of 1-2° per minute for the first five minutes.

" Bonavita’s variable temperature kettle offers a lot to the coffee-lover who is anxious to simplify his or her routine. "

Calculated heating intervals attain the target temperature quickly without overshooting, so there’s no need to wait for scalding water to cool down. The essential hold feature ensures that the busy barista won’t miss their desired temperature or lose much heat during rests in a long brewing process. Different size and spout options (1.0-liter gooseneck or 1.7-liter short spout) make these kettles suitable for a variety of uses, including pour-over brewing and cupping.

Thanks to the inventive and economical folks at Bonavita, manual brew enthusiasts can be relieved of one of their primary concerns: temperature control. Whether by man or machine, coffee can continue to be made with excellence, and Bonavita is committed to fueling that tradition.