When coffee professionals from all over gather each year for the annual Specialty Coffee Expo, you know it's going to be a whirlwind of a weekend. Sample bags of beans are doled out to prospective clients, business cards are shoved deftly into new hands, smiles abound and the coffee flows more freely than the water does (seriously, it's sometimes tough to stay hydrated at these things!). There are a half dozen parties every night, the local coffee shops put on special menus and polish up their service, and every Airbnb in the area will suddenly find itself laden with grinders and brewing wares. It's a phenomenal sight to behold and such a thrill to take part in - every year we leave impressed, exhausted, and excited for the weeks to come.

When coffee professionals from all over gather each year for the annual Specialty Coffee Expo, you know it's going to be a whirlwind of a weekend. Sample bags of beans are doled out to prospective clients, business cards are shoved deftly into new hands, smiles abound and the coffee flows more freely than the water does (seriously, it's sometimes tough to stay hydrated at these things!). There are a half dozen parties every night, the local coffee shops put on special menus and polish up their service, and every Airbnb in the area will suddenly find itself laden with grinders and brewing wares. It's a phenomenal sight to behold and such a thrill to take part in - every year we leave impressed, exhausted, and excited for the weeks to come.

This year saw quite a few new products we can't wait to get our hands on, some lovely new coffee experiences that will leave a lasting impression, and so many new friends we get to keep forever. It was in some ways an overwhelming week with a lot to cover, so I'll go a little simpler here: the photos below will tell most of the story, and I'll include more context in the text and some links to videos and web pages for more info. Also, be sure to check out our Youtube playlist for videos from the event, product highlights, and more!

Acaia's booth was in a constant state of bustle surrounding their new prototype dosing device, called the Orion. The Orion is little more than a hopper for beans, a scale for weighing, and some internal mechanisms to dose out beans to within a bean or so of your target weight in grams. This is an exciting tool mainly for shops and baristas, as dosing out coffees can be a laborious chore which faces constant interruptions when the queue builds up. With an added level of accuracy and automation, the task can be simplified and sped up, allowing the barista's attention to be better split between their duties while still allowing for proper execution. That's going to be a huge help for some shops, though others may see it as superfluous. Acaia expects to release this later this year, with an expected retail around $800. We'll be sure to check in for more! 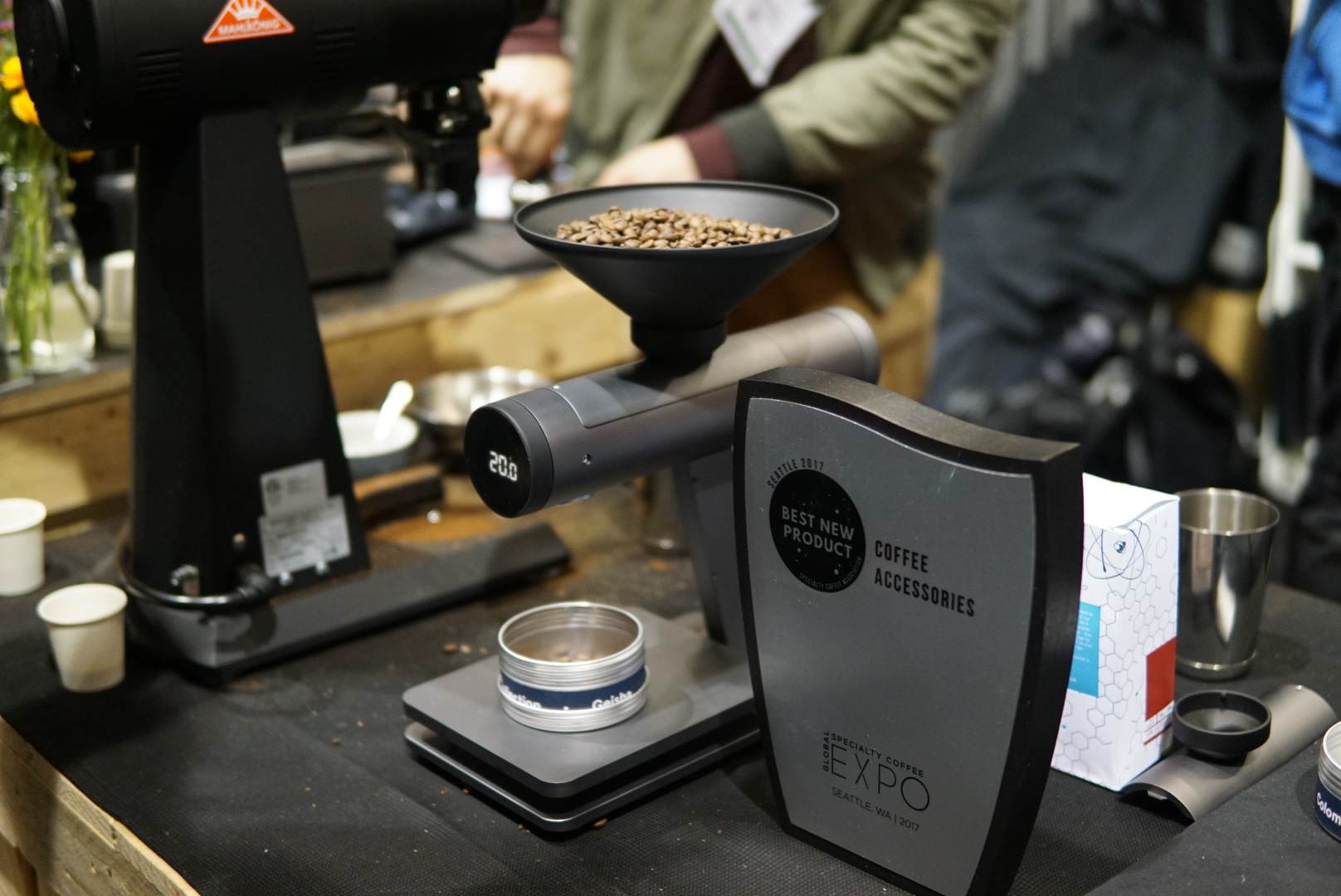 Nick Cho's December Dripper made an appearance at the Acaia booth this weekend, with baristas brewing up their coffees on it - though we didn't see any demos being given. The device is much like a steel Kalita Wave 185, with conical walls and a flat bottom, but the key is what happens as the coffee exists the dripper. Below the bottom of the basket is a plate made of PTFE, and when the base portion of the dripper is rotated, slots cut into the plate either open or occlude the holes in the base of the dripper. This means you can restrict your flow rate to allow for more contact time in the dripper, or let it flow freely as you wish. There are currently three flow settings and a closed setting, but Nick told us there may be more settings on the way as the dripper approaches its retail release. 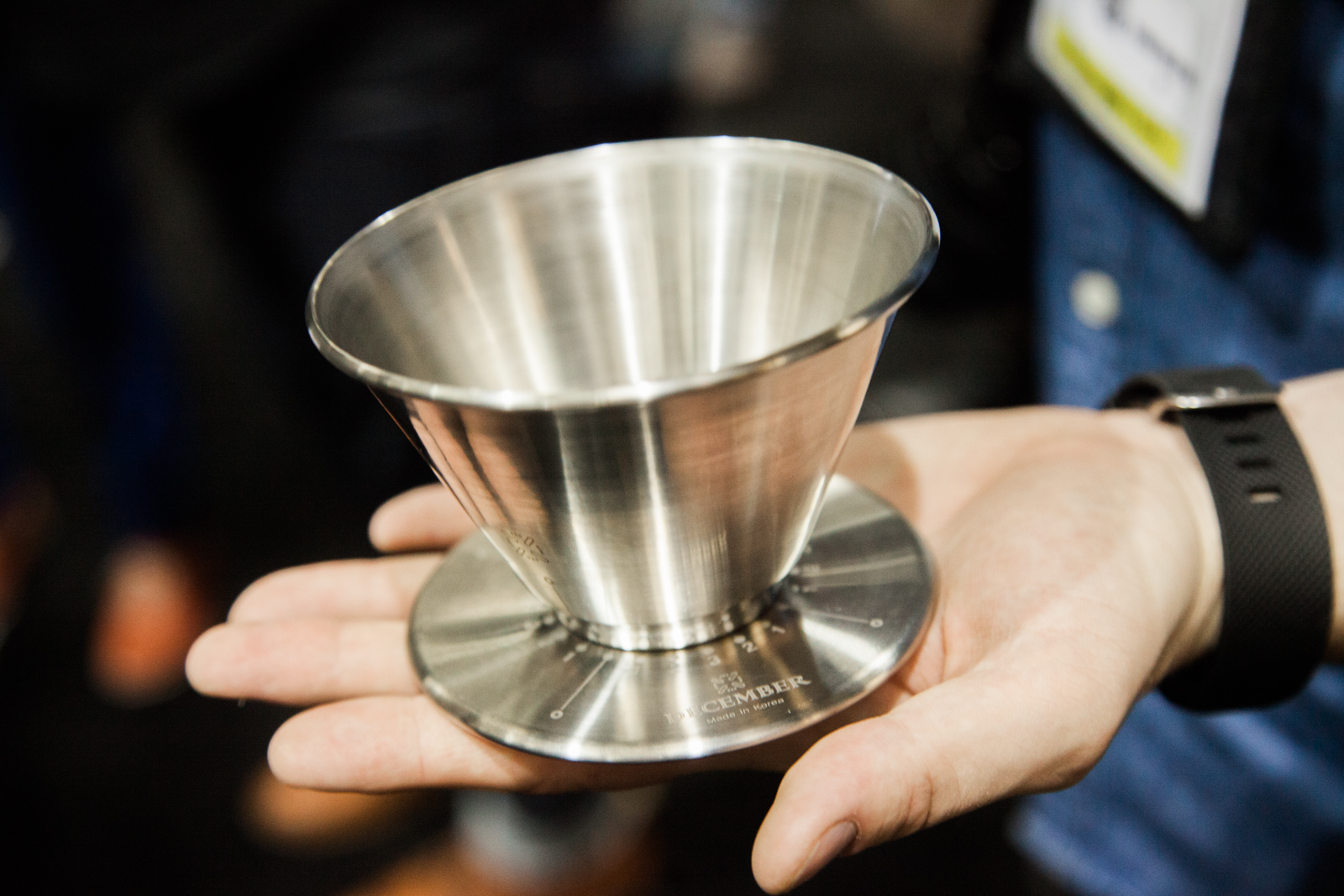 Has Mazzer created the answer to the EK43? We will soon find out! The ZM grinder features large 83 mm flat burrs, and LCD screen with 20 programmable profiles, but where it gets even more interesting is in the grind size adjustment. The ZM uses an electronic adjustment system which measures burr distance in microns. That's right - we're moving beyond arbitrary numbers and letters and are now headed toward actual burr aperture measurements, which should give more reliable accuracy and better settings translation between shops and between grinders. With the promise of "perfect" burr parallelism and miniscule grind retention (less than 0.5 g), the ZM is shaping up to be one of the most exciting grinders we've seen all year. 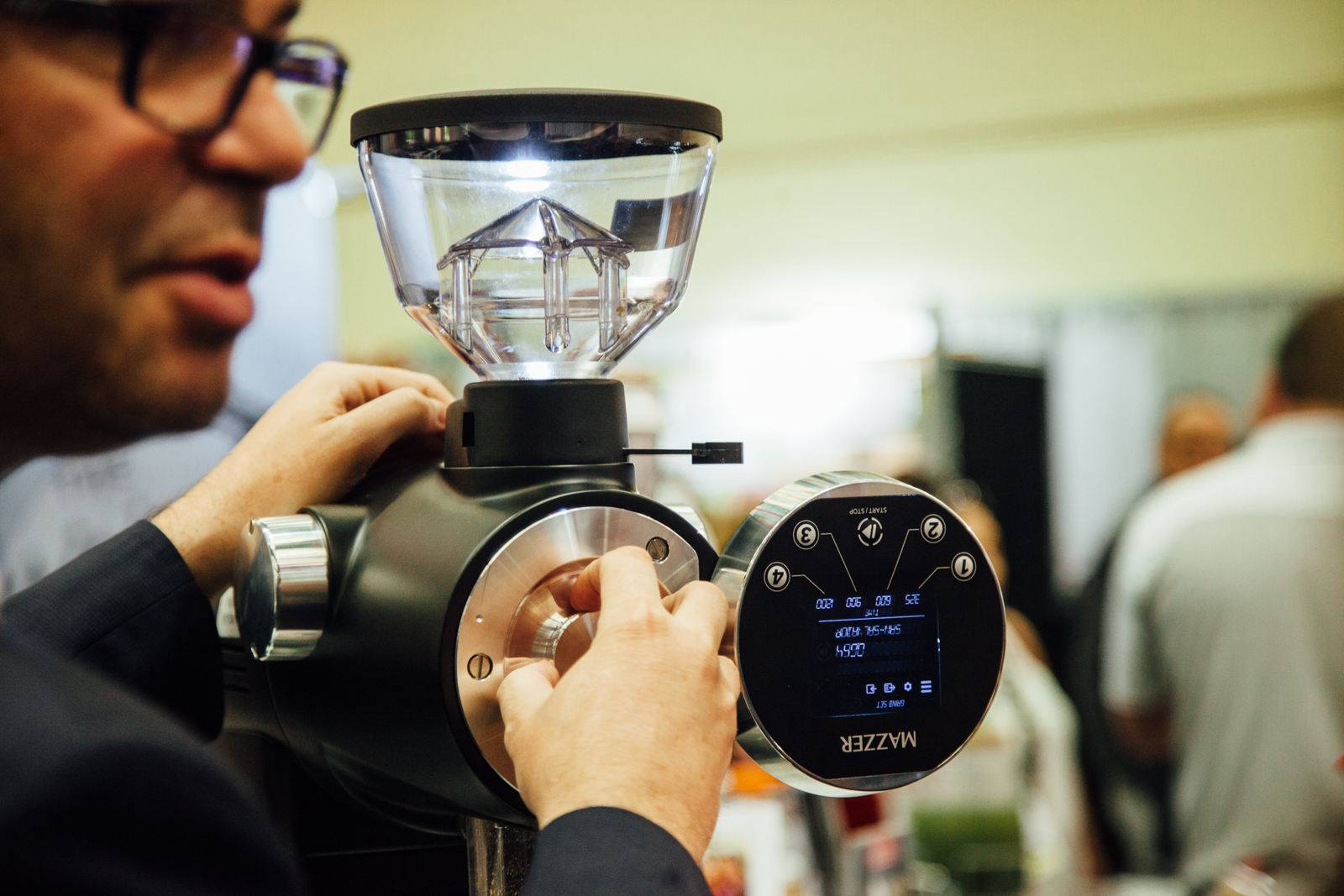 Now that the Sette 270 and 270W have had about six months of service out in the world, Baratza is ready to announce the newest member of their family: the Sette 30. This new addition to the series will be simpler and more affordable for home brewers, with less emphasis on espresso. It will have just 30 macro settings, no micro adjustment, and non-convertible forks meant only to hold the included grounds bin. It will ship with the new "BG" burr intended for coarser grinding, and features a pared-down version of the 270's control panel with only the basic grinding controls and no stored presets. 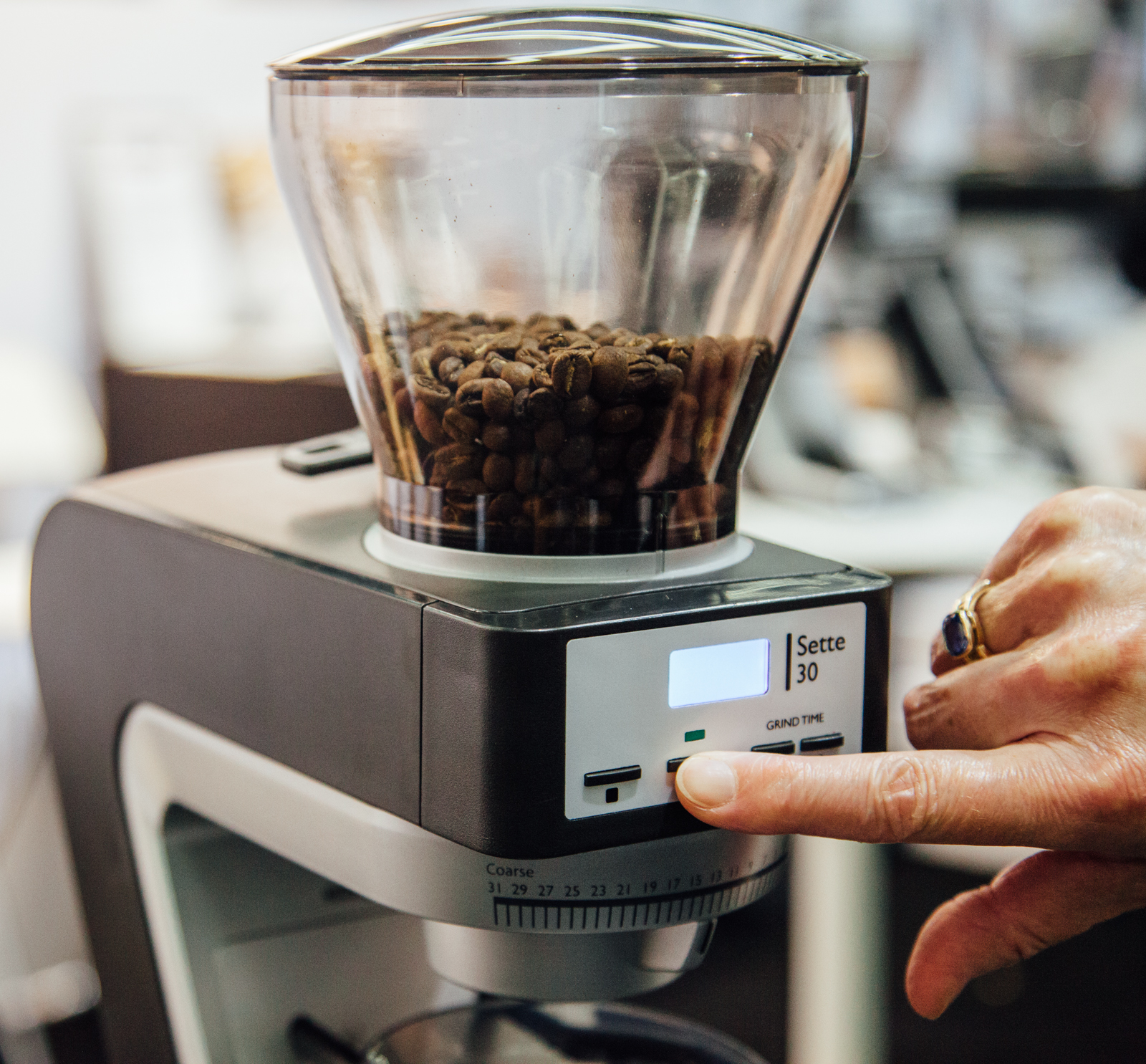 We got a taste of the Ground Control brewer last year in Atlanta, but this year it's clear that they've been working on maturing the product and bringing it to the coffee drinking world. The 2.0 version of the brewer uses the same mind-blowing tech to extract more from your coffee without running into those dreaded overextracted flavors, brewing up to a 1:20 ratio with a balanced flavor and some really intriguing complexity. Plus, it's quite the exciting sight to see coffee being squirted into a large glass globe atop the machine to mix the stages of extraction before being sent off into the urn waiting below. Plus, you get a cost savings as a cafe if you can extract more flavor from fewer grounds without sacrificing on quality - that's really exciting stuff!

We've been lucky enough to have a Steam installed in our office now for a couple months, but it was a truly enlightening experience to catch the machines in action at the Slayer booth. Slayer was doing milk steaming demos with both cow's milk and alternative milks to demonstrate how the Steam's Vaporizer tech can bring out the most flavor in your drinks. If you walked up feeling skeptical about how much impact a steam wand might be able to have, you'd have definitely walked away a believer. The drier steam really brought out the sweetness in almond milk, but a lower temp steam seemed to give cow's milk a better coating texture. The fun part is that the Steam doesn't require much tinkering to adjust these settings, you can quickly make changes that take almost immediate effect, so even a barista on bar could make a quick switch to get better results with their milk. 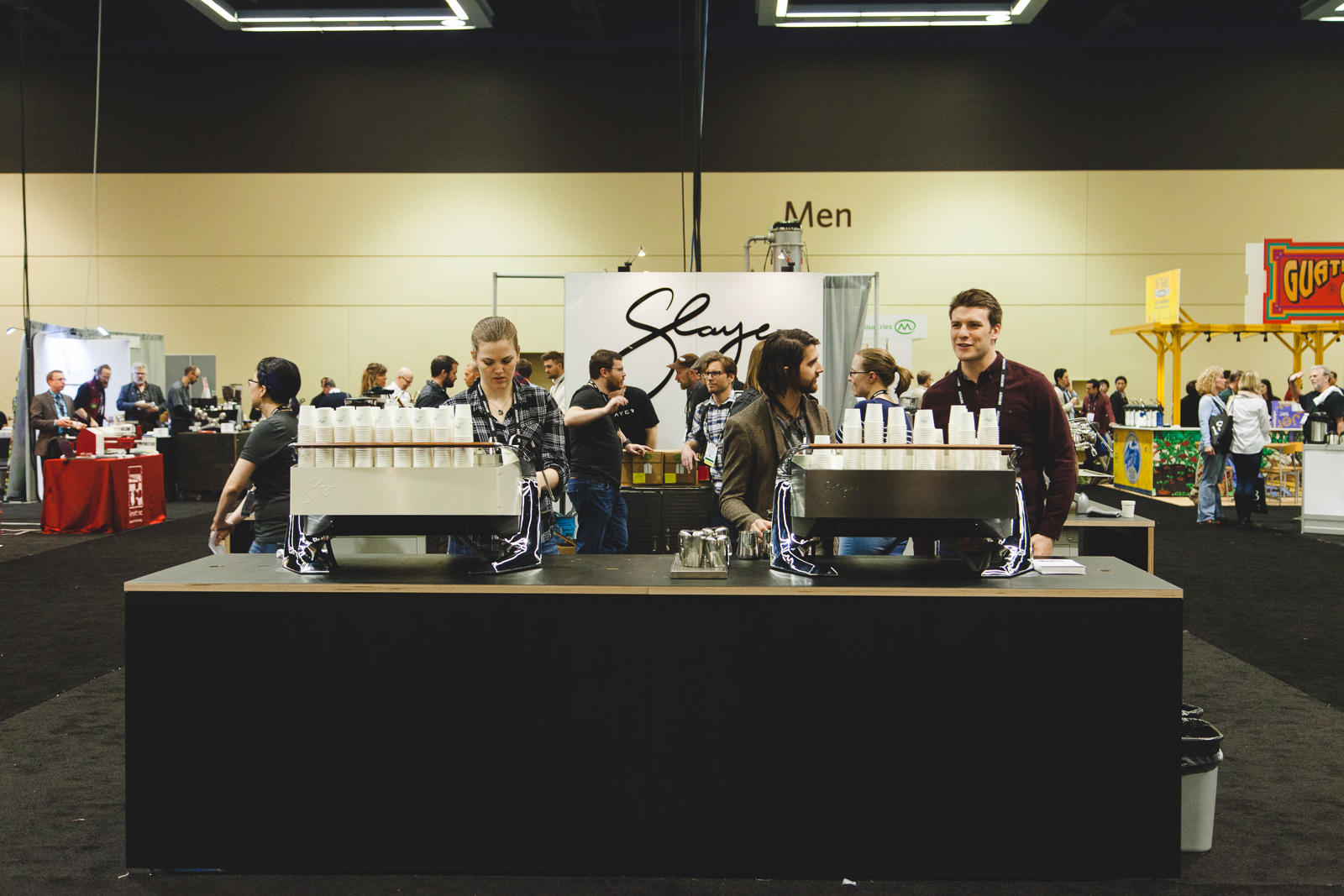 The Puqpress for Mahlkonig Peak/K30 Grinders

We've seen Puqpress around before: it's an automatic, counter-top electronic tamper with adjustable force. That's pretty cool on its own, but now they've partnered up with Mahlkonig to create a tamper format that fits directly below your K30-style grinder (and that includes the Peak!). It's quite compact, with an easily accessible control panel to change your tamping force, and it's super convenient to go from grinding to quickly polishing to tamping in one short series of movements. If you're a barista, you'll immediately see how nice it is to have minimal movements in your shot prep, not to mention less strain on the body from manual tamping. 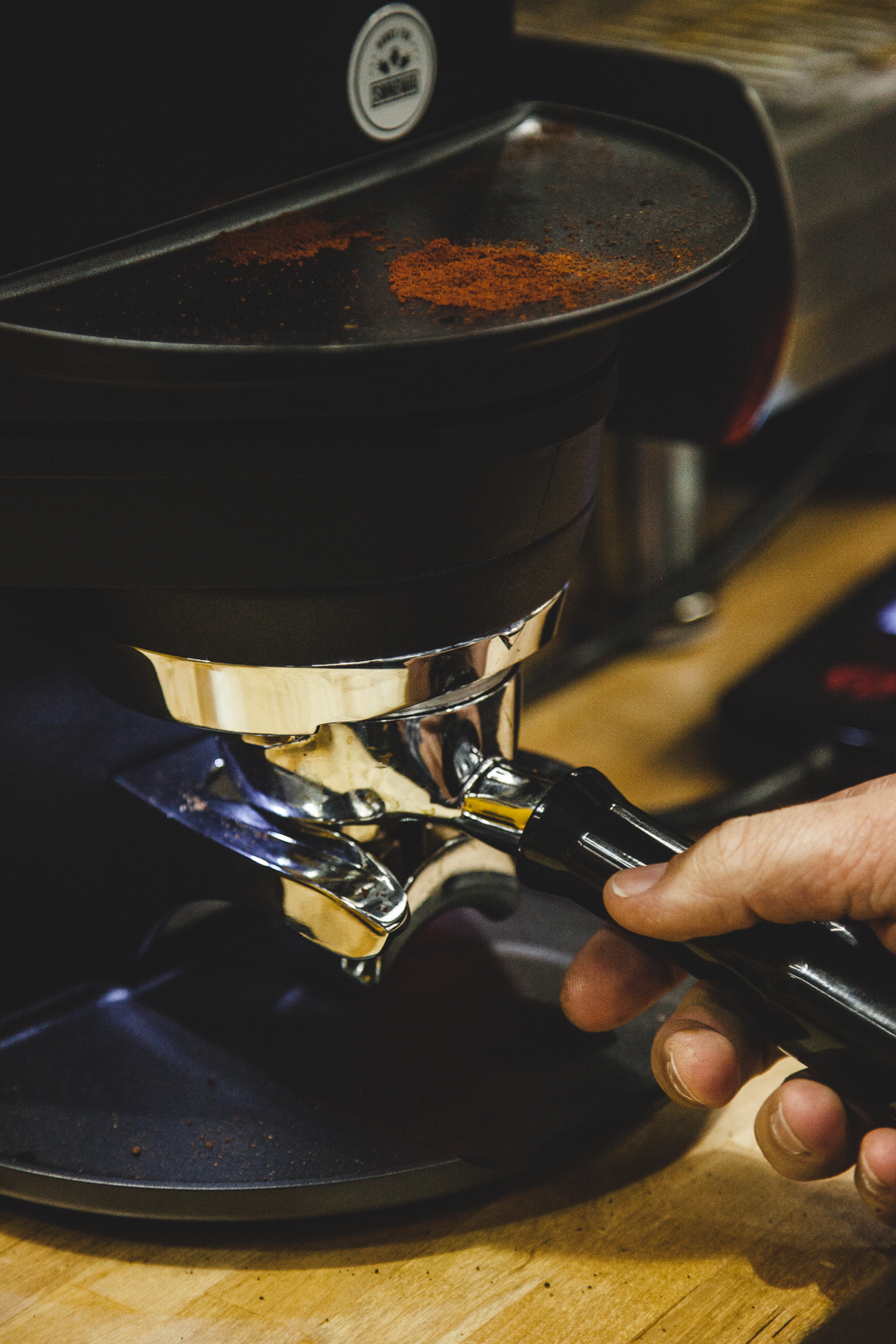 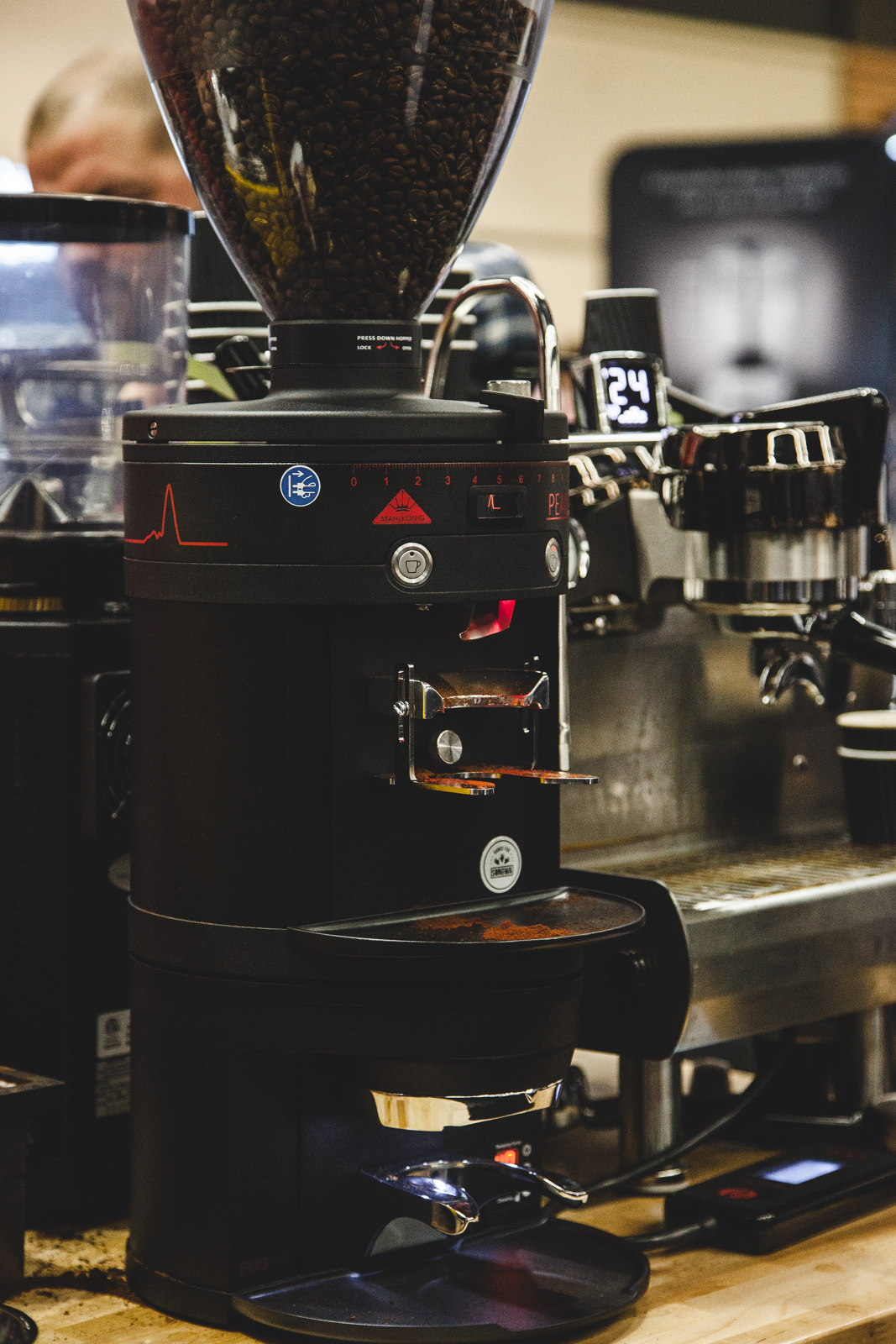 Seattle has no shortage of charming cafes with excellent coffee and service to match, but we were delighted to find Cherry Street's newest shop through the multiple parties and events hosted there, as well as a quiet stop on our own. The shop is bright, modern and clean, with knowledgeable staff and a full coffee and food menu (breakfast, lunch, AND dinner served here!). While the Expo was in town, they were also featuring the signature beverages of three past US Barista Champs: Laila Ghambari, Charles Babinski, and Pete Licata. If you go, you're sure to wind up wanting to stick around for a few more hours to try everything else on the menu - and that's speaking from experience, of course. 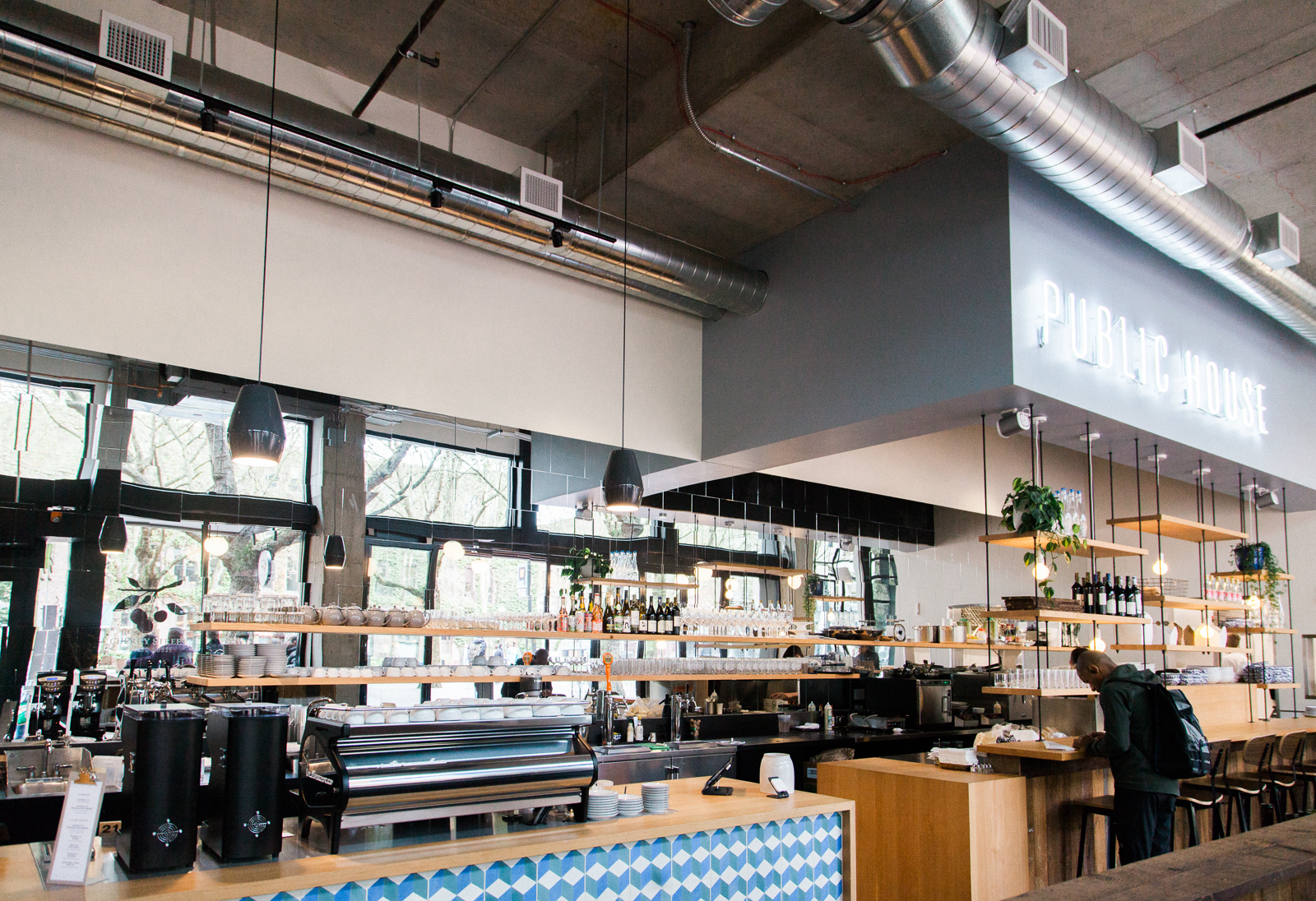 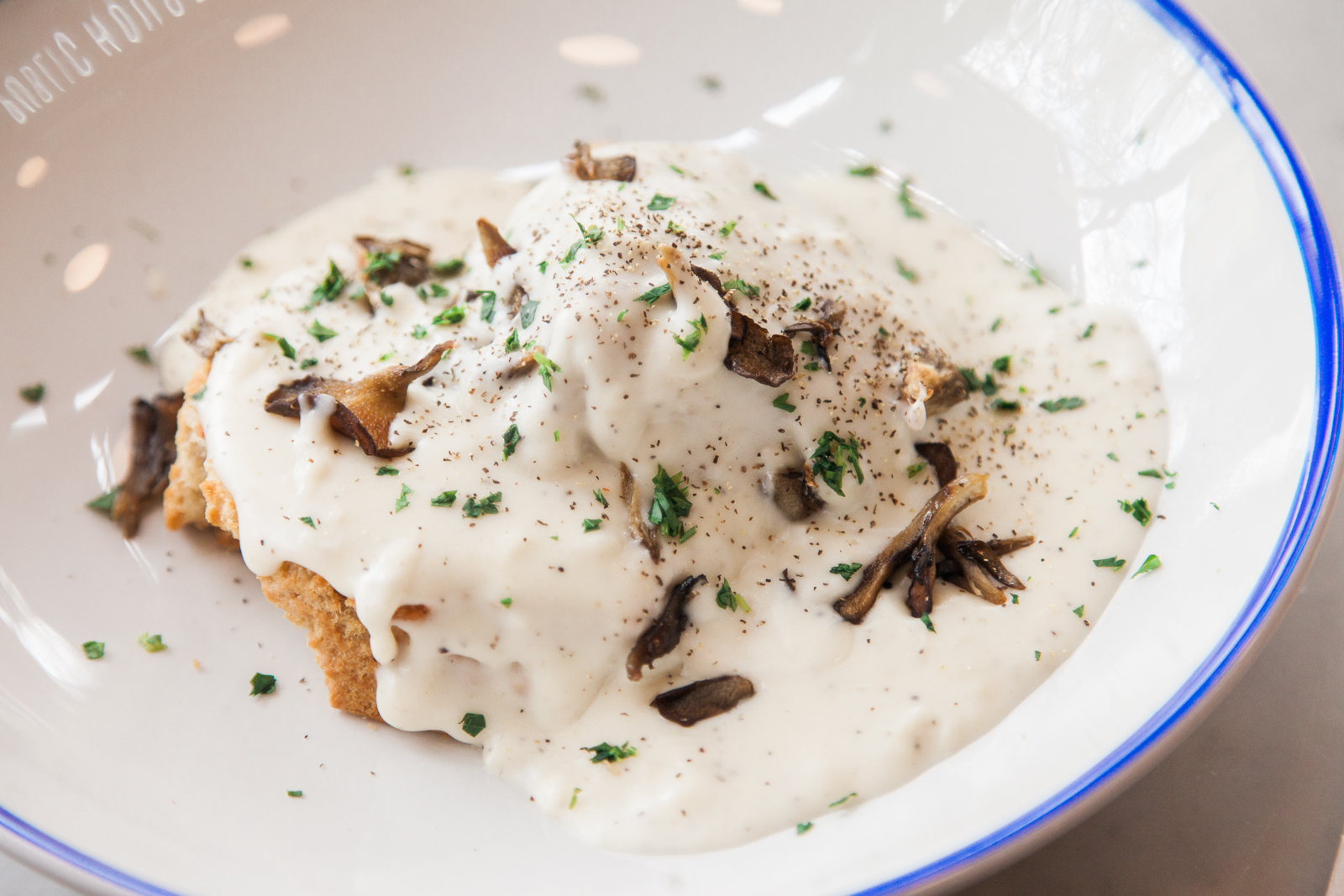 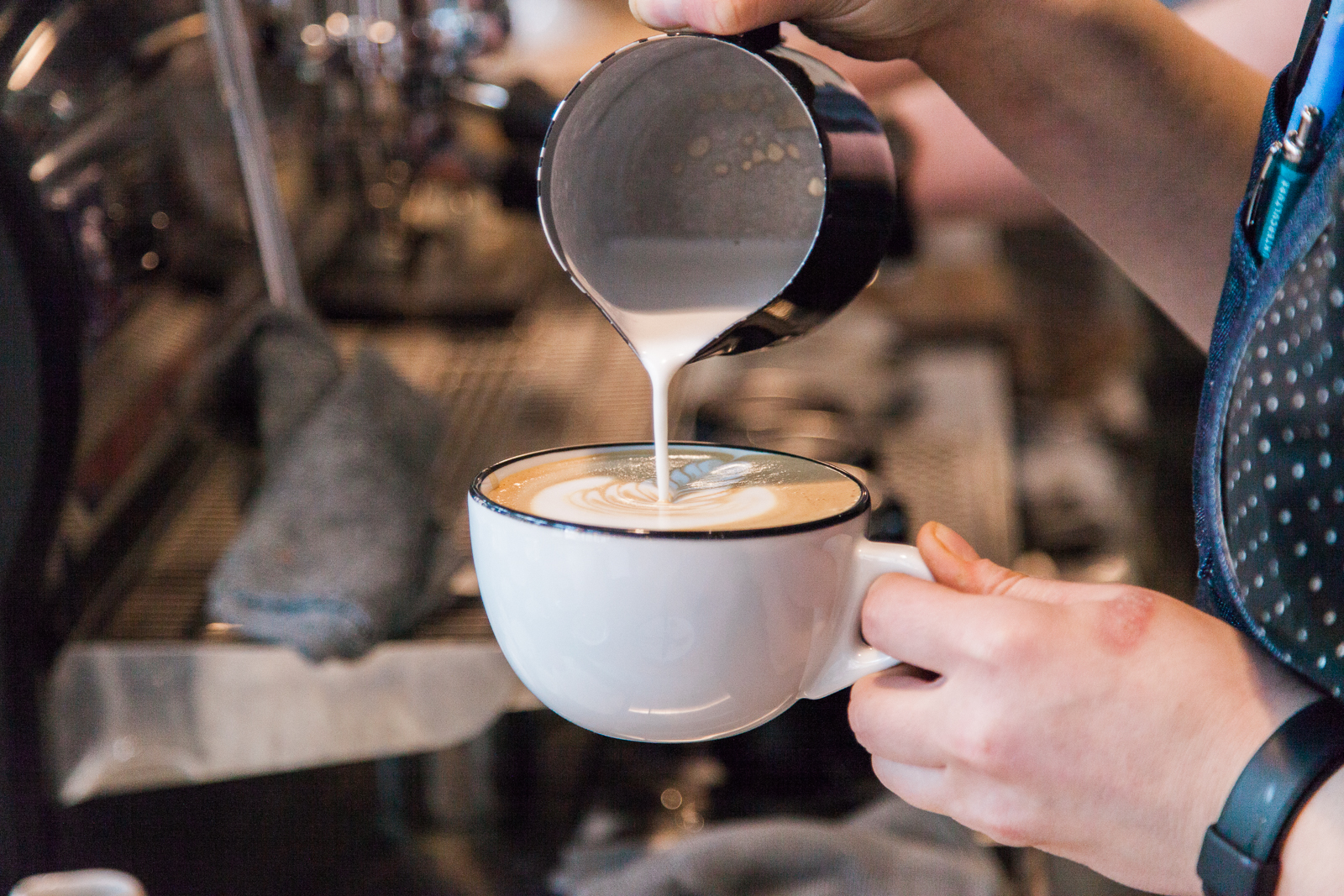 Another delightful stop for coffee, just around the corner from Cherry Street Public House, Elm's bright and airy shop offered house-roasted coffees with flair. A long bar with plenty of seating gives you face-to-face access to your baristas so you can catch up on life events or just get nerdy about coffee. Their espresso tonic was the best we've had in recent memory, and the house-made hazelnut milk iced latte was a welcome break from the norm. 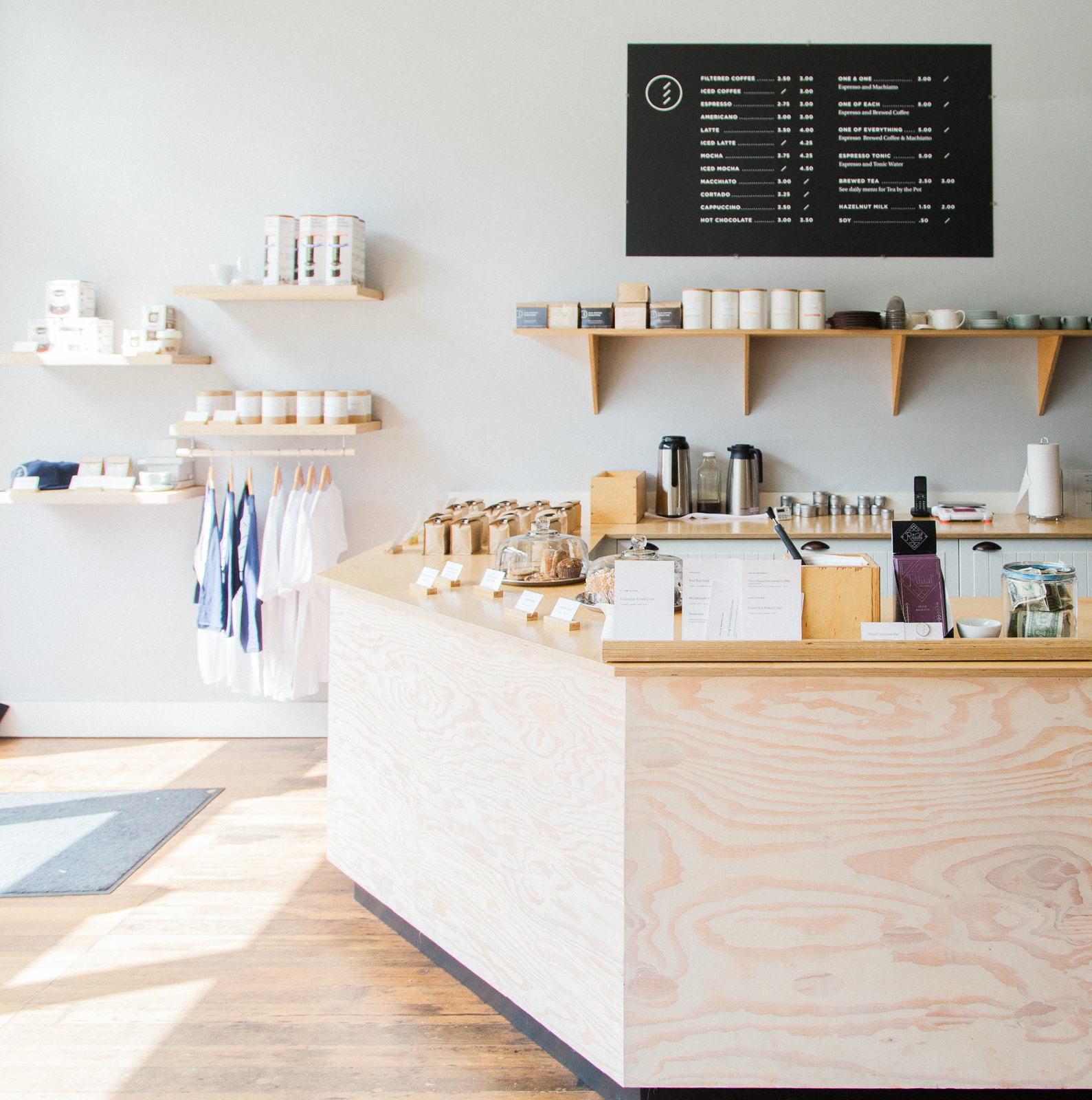 At least during the Expo weekend, you could easily recognize the La Marzocco Cafe by the line extending out the door at nearly all hours. It was certainly one of the more steadily busy cafes we visited, but that line wasn't a problem once you had ordered as the seating inside was plentiful, in a wide open and immense semi-industrial-style space. Nordic coffee legend Tim Wendelboe's coffees were being featured for the month, with a variety of bean offerings for both espresso and brewed coffee (prepared via Aeropress). For sit-down service, Tim had selected specially-designed cups to highlight different coffees, but the takeaway was nonetheless tasty and well-prepared. 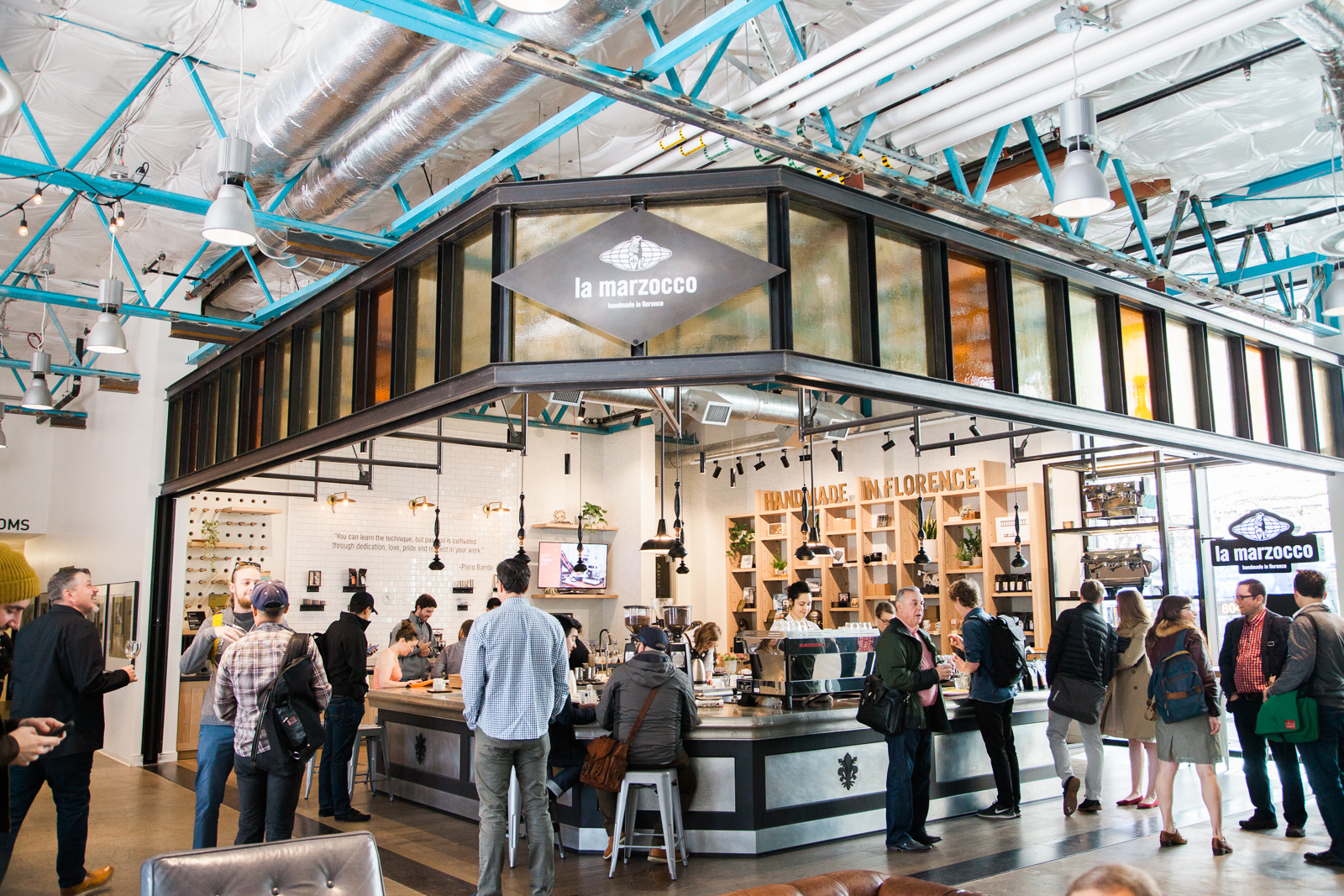 Let's be real here: we at Prima love a good doughnut. Whether they're from our local haunt, Nord's, or *ahem* a certain Brand Manager decides to treat the office to something homemade, we are highly likely to indulge in these sugary fried treats. And when we find a good doughnut shop, we may just be highly likely to indulge a bit more... as in three days in a row. General Porpoise is one of those stand-out doughnut shops we just couldn't resist. They keep it fairly simple: they had just five flavors to try when we were in town, and they have a selection of coffee offerings to go with your treats featuring multiple roasters from around the US. Both the doughnuts and the coffees were fantastic and we've got no complaints, except that perhaps they only have the one shop in Seattle and haven't announced their relocation plans for Louisville - at least, not yet. 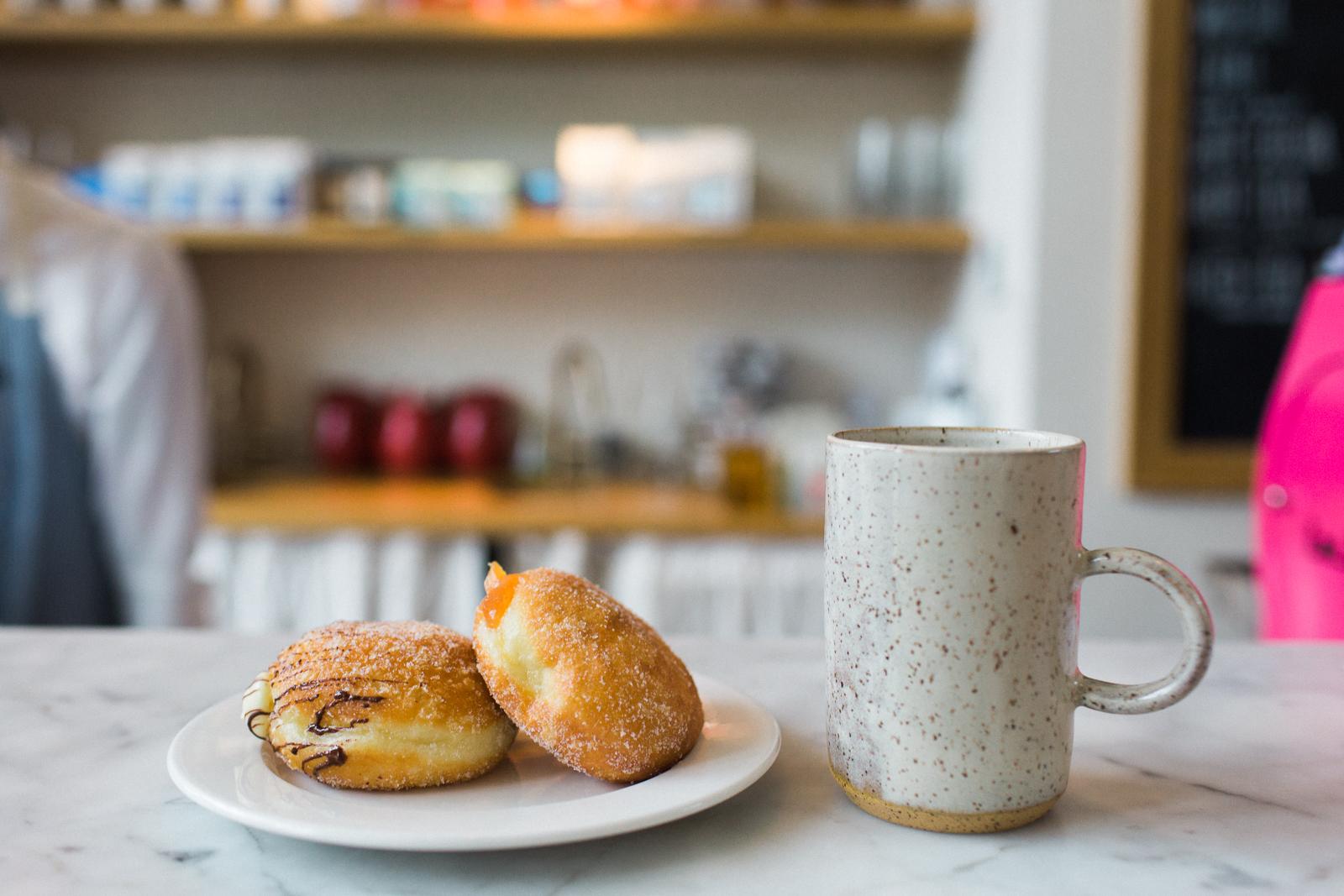