TMahlkönig's update to the Guatemala features all the capabilities of the previous model but in a handsome new metal package. It features a stepped grind adjustment with 20 options for grind size range from just coarser than espresso to cold brew. The 71mm flat steel burrs spin at a breakneck 3500 RPM, grinding up two pounds of coffee per minute at the medium setting. Additional features include the bag clamp, adjustable tray, knocker, and 900g hopper, all of which Steve highlights in this video. 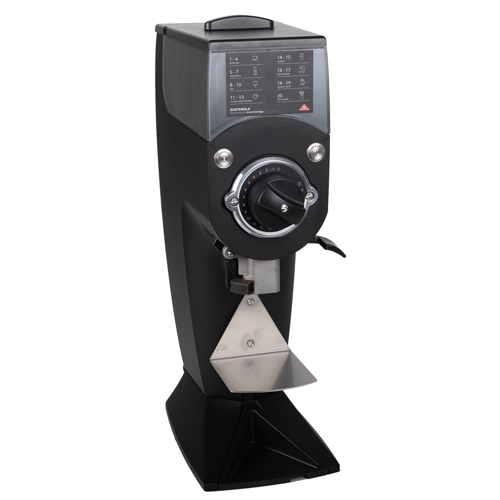 Hey, it's Steve here from Prima Coffee. And today, we're going to take a look at the Mahlkonig Guatemala. As you can see, this one looks a lot like the old Guatemala models, but this one is going to have some serious upgrades. The first one is going to be in the body. This version is all-metal construction except for this lid up here which is plastic, and the dial here which is plastic as well. The hopper is a little larger. This one will hold almost 2 pounds of coffee in here. Also, you don't have options for the different platforms. This one does come with this platform, which can be moved up and down as long as it's in these screw holes here, so it is in the highest position and you can move it down one position. The other models, before this one, you could have a basket fork as well, this one doesn't have that. And there was also a different attachment for the chute here and the knocker. But this one has just this one chute and knocker, and just this one platform. So the Guatemala's purpose hasn't changed. This is still going to be for your medium volume cafes, for your batch brewing, for your pour-overs. And this is not going to be an espresso grinder. So even though you'll see up here, it says 1 through 4, on the dial here, it's going to be espresso, we found that that's actually too coarse. It's just a bit too coarse to do any espresso. So you're not really going to use this to doing espresso, it's not really built for that anyway. When you turn the motor on, it has really low torque in the beginning, so if you were to fill this up and then try to turn it on, it would be very difficult for that motor to actually turn. So this is not built for espresso. Bu, it does have 20 settings on here, from 1 all the way up to 20, just like the previous models. And 1, we find out here, again, it's just north of espresso, and the 20 is going to be right around cold brew. If you wanted to calibrate this, it's very simple. All you have to do is remove this screw here and pull out the dial, and behind that, you can actually turn the disk to get it where you want. So, if you're going to calibrate, you're going to calibrate to be a little bit coarser, if it's not going as coarse as you want, but you're not going to be able to calibrate to go any finer because this is set out of the factory as fine as it can go. If you do set it to go a little bit finer, again, you're not going to be able to do espresso anyway. The closest the birds get together before chirping. This is a stepped grinder, so it wasn't built for that anyway. So this Guatemala has 71-millimeter flat steel burrs. You got your bag knocker here, and then, you also have this bag clamp. You can see on here, it has this texture, so it'll hold your bag in there if you want to grind directly into your bag. The Guatemala can grind about 2 pounds a minute, so about a pound in 30 seconds.

Finally, this is actually going to be a little bit closer to 20 to 25 seconds when we have it on a medium setting, which is set for something you'd use on a batch brew. So I kind of want to show you what that's like. Bring it up here. You can see, it does give you a guide here, like the previous models, which may or may not be where you're setting it. I'm going to put it here on 14, and we'll grind there. So, as I said, when you're putting bags on here, bags in the bag clamp, this platform may get in the way. This platform is really great if you are grinding coffee for your batch brew, but if you're grinding bags for customers, and that's something you're going to be doing a lot, you may want to remove this platform. All you need is a flat-head screwdriver. So we remove this to grind into a bag, but you can also move this up and down. You can see there are holes, three holes here, so we had it on the highest setting, but you can also move it down to here if you'd like. So if you're using containers to grind into that are a little taller, then you may want to move this down or you can take it off, like we've done here completely. Take that lid off, go ahead and dump it in. So this is 1 pound of coffee. Show you. So it doesn't have a shaker plate on here, so it's probably best if you are moving it as it's grinding in here because it will pile up and it may spill out over the top. Here we go. All right. So, there we go, about 25 seconds. Burrs here are spinning at 3500 RPM, which is incredibly fast. You might think that there's going to be a lot of heat build-up in here, but because of not a lot of contact time with that coffee, because it's spinning so fast, it's grinding so fast, that you really don't see a lot of heat there. We also don't see a lot of retention. We're seeing about half a gram of retention after, of course, you use this knocker here. But because this is mainly a shop grinder and it's probably going to be used for grinding up your batch brew, you know, 0.5, so half a gram out of large batches, say 120 grams, is really not that much. So that is Mahlkonig Guatemala.