Finally a home grinder with the features found before only in cafés. The Fellow Ode boasts 64mm stainless steel flat burrs, 31 grind settings, and a PID feedback control to ensure consistency for all your favorite brewing styles from the fineness of Fellow’s own Prismo through the coarseness of cold brew. In this video, Ryan discusses all the Ode’s features and addresses questions you may have about noise and retention. 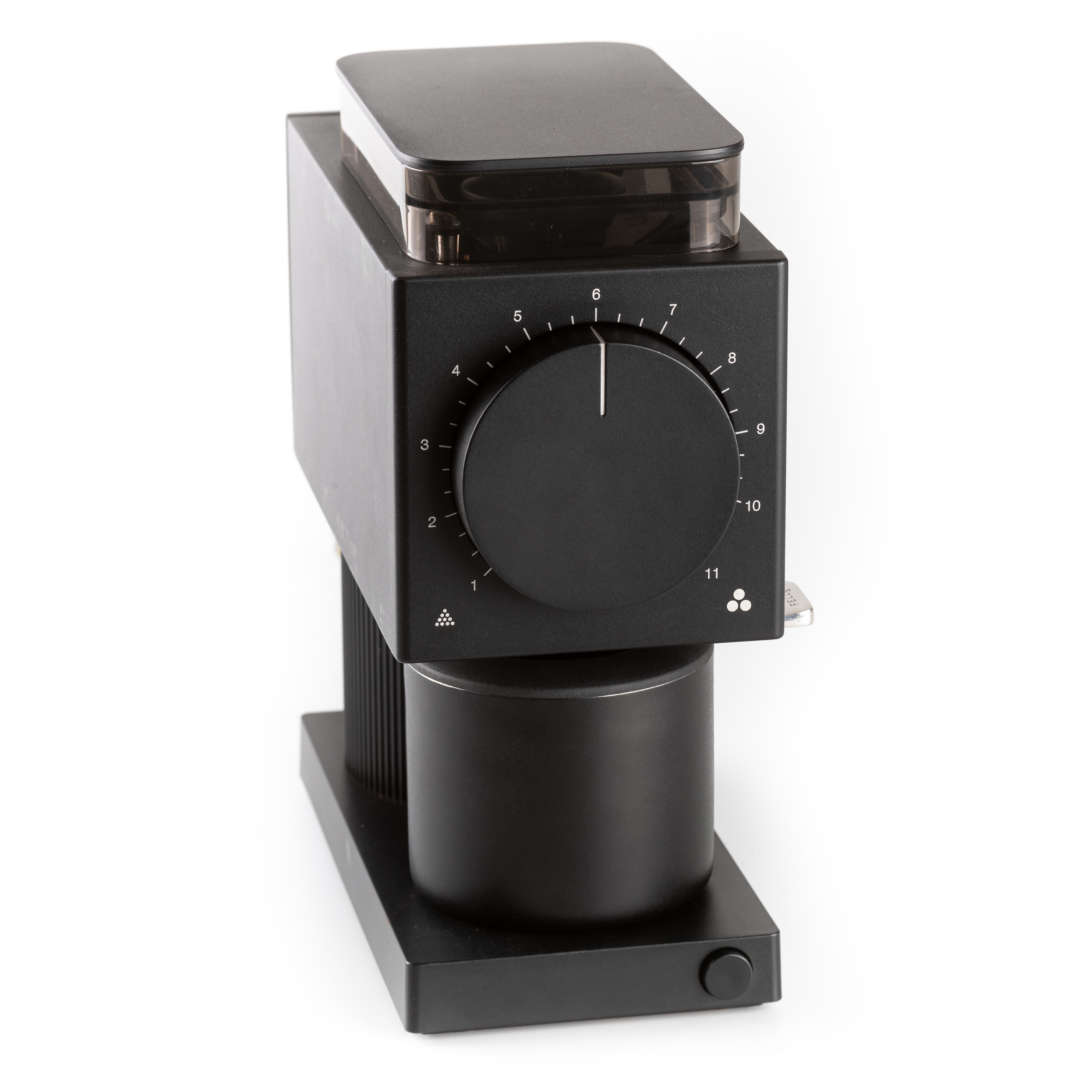 Hey all, Ryan from Prima Coffee here. Today, we're going to be taking a look at the newest electronic home grinder on the market, the Fellow Ode. Featuring 64-millimeter flat steel burrs and a smart PID-controlled motor, the Ode is an ultra-modern state of the art home grinder intended for pour-over and automatic brewing methods. And today, you're going to learn all about it. At around 300 bucks, the Ode is one of the first grinders in its price range to feature a flat steel burr set. Most grinders in this category utilize a conical steel burr set, which does cut coffee in a slightly different way. And in general, a good sharp flat steel burr set does seem to increase uniformity of grind and therefore quality of the coffee. So, we're really excited to see that feature come up in a home grinder around this price. And flat steel burrs really are just one interesting attribute among several other unique features in the Ode. So starting up top, this grinder is designed for single dosing. It has no integrated grind timer and only room for about 80 grams of beans in the hopper. That means you'll need to pre-measure your beans by either weight or volume before grinding. This is not a grinder that will allow you to store, you know, half a bag of beans up top and then grind on demand. The idea here is to store your beans in a sealed up bag instead of in the hopper where they're exposed to more air. The shorter hopper also contributes to the remarkably low profile of this grinder which stands only about 9.4 inches tall which is perfect for any countertop, and even cabinet storage. One of the most interesting features of the Ode is what Fellow calls the PID feedback control, which lets the grinder know when your beans are done grinding and then automatically shuts the motor off after that. What's even more interesting is that the PID functionality also works to keep that burr spinning at a constant RPM, helping to ensure a consistent break up pattern throughout that cycle. So, when you turn the grinder on without beans in the hopper, the PID will immediately recognize there's no coffee and just shuts the motor off for a moment and then kind of reboots and then runs continuously until you add coffee and then the grind cycle is complete. So, I'll show you what that sounds like. Moving on, the Ode features an easy magnetic grounds catch that automatically positions itself so you don't have to lean over and check the alignment with the spout. So, just put it in like this. And, bam, the magnet will put it right into place. On top of the grounds catch is a plastic lid or what I'm going to call the chaff shield. Some mess is going to be unavoidable with any grinder, but this shield in combination with that magnetic grounds catch really does help minimize the loose chaff flying around and direct everything into that grounds catch. The grounds catch also features some wings on the inside that help direct grounds into whatever device you're pouring into, just a little thoughtful addition there. One other quick note, there has been at least one other overview published online that suggests the magnetic grounds catch will interfere with the functionality of a gram scale. This has not been our experience when using the Ode grounds catch to weigh beans. We've used Acaia, Oxo, and Jennings scales and we have not had any issues with any of them. We also reached out to Acaia for clarification and they indicated that it would take a magnet of about 3800 gauss force to interfere with the reading, and this magnet does not measure up to that. And even if it did, it might only add about 0.2 grams to the displayed weight, not a big deal. But just to reiterate, we did not encounter this problem at any point with that grounds catch on any of the scales that we used, and it is perfectly compatible with your gram scale as well. Moving on to this side, Fellow's integrated what's called a grinds knocker.

This is something we normally only see in commercial filter grinders, so it's really interesting to see it in a home grinder. It's a helpful little tool to minimize retention of grounds and chaff in the chute after a grind cycle. Just flick it and allow it to spring back into place about three to five times to clear the excess particles, just like this. And it's basically just hammering the wall of the chute and any remaining particles will fall through into the grounds catch. Moving up front, the Ode features a very large stepped grind adjustment with 31 grind size options. That's plenty of range for any pour-over or automatic brewer dose. But at heart, this is a filter grinder and it is not an espresso grinder. It can grind fine enough for an AeroPress or Fellow's Prismo AeroPress espresso attachment but it cannot achieve a true espresso grind. Out of the box, it will come calibrated for the finest absolute setting, and that's around 500 microns or so. If you want, you can calibrate it for a coarser grind. What you need to do is remove the faceplate and the dial and adjust the calibration wheel to grind coarser. Each clockwise click will add one more step of adjustment in coarse direction and one less on the finer side. So, you can essentially shift the whole grind size range coarser, but you cannot adjust it any finer out of the box. Don't try it. Here's a few shots of the grind and different grind settings to give you an idea of grind quality. Set relatively coarse, like for a 40-gram dose, the Ode will grind in about 8 seconds, and the PID controller will shut the motor off at about 12 seconds. I mean, there's about a four-second lag or so between the time the grinder's finished grinding and the time the PID senses that it's done and actually shuts that motor off. It's an impressive speed for a grinder of this size, but there is a little bit of a lag with that PID. In terms of noise, we did use a few different apps and measured the decibels around 90, just setting the phone, you know, about six inches away from the grinder on the table. That matches up pretty much exactly with other grinders in this range, like the Baratza Virtuoso. It is certainly not an annoying sound, it has kind of a more even tone to it. but it's also not, you know, very quiet. It's pretty standard. Lastly, since many of you have asked about grind retention, we did take the grinder apart and did an air blast to clean out all grounds from the burr chamber and chute and then ground 20 grams at a fine setting and then measured the difference between input and output. The grinder retained about one gram or slightly less during that first cycle. Every subsequent cycle will yield about 0.3 to 0.5 grams in variance output, which is honestly really average, normal for a grinder of this size. So, that's the Fellow Ode. Great grind consistency, straightforward to use, and loaded with features made to make it an ideal grinder for the home.