Created for medium-volume cafes, the Mazzer Major V is a more sophisticated version of the company's beloved Major grinder. It has 83mm flat steel burrs that spin at 1600 RPM and grind espresso doses in about 5-6 seconds. The many updates include a new burr removal system, keeping grind settings intact even when you remove the top burr for cleaning; quick calibration collar; portafilter vice and activation button; digital display in which up to three grind settings can be saved; Grind Flow Control dampers to keep static and clumping to a minimum; and more. The hopper holds about 3.5 lbs. of coffee and is stylized with a more modern shape. In the video, Steve walks through the various upgrades and features. 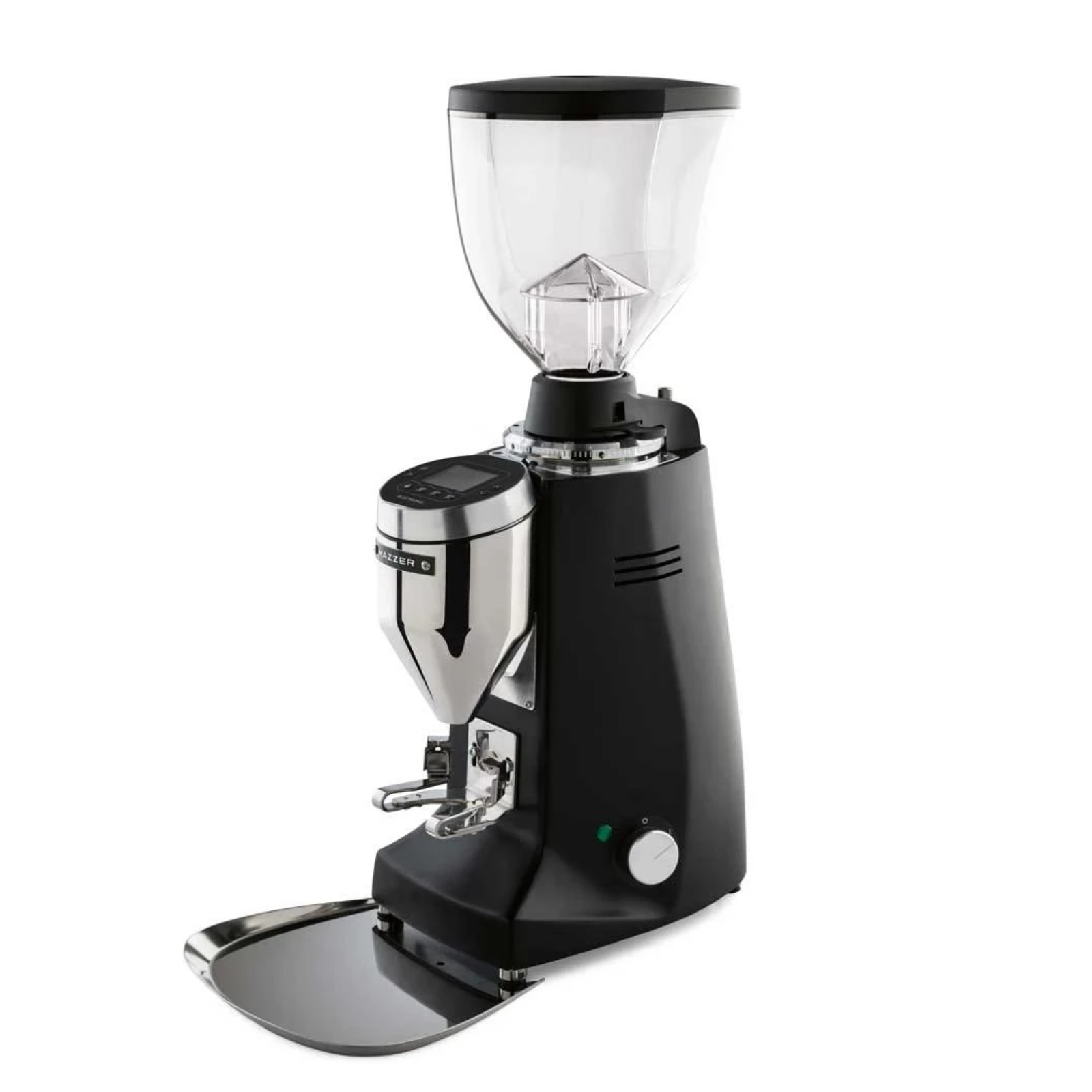 Hey, it's Steve here with Prima Coffee. And today, we're going to take a look at the Mazzer Major V Espresso Grinder. ♪ [music] ♪ The Major V has been built for medium to high-volume cafes. This has 83-millimeter flat steel burrs. Those are spinning at 1600 RPM, so it'll dose out fairly fast, about 5 to 6 seconds for your 18 to 20-gram espresso dose. The hopper here is fairly large, a little bit smaller than the old one, but still, you can hold about 3 and 1/2 pounds of coffee in there. And you can dial this in here, program your shots by second, down to the 100th of a second. So let's jump into the collar, which has been completely redesigned here. The biggest feature that you're probably going to notice is that on the old Mazzers, you had to completely unscrew the top burr, so that top burr carrier, in order to get access to the burr and to clean the other burr and clean the burr chamber. Well, what Mazzer has done with this one to make it much easier is once you've dialed it in, so that you don't have to worry about figuring out where you were when you put the top burr back on, what they have done is they've created this system where you can remove these four hex screws right here on the top, and you can actually just pull that top burr out. It doesn't change your grind settings at all. It keeps those grind settings so when you put it back on, it'll be where you were before. But really what you want to do is you want to take these four plastic covers off. You probably...you can use your fingernails if you can get it, but you probably need something like this that has a point on the end of it. So those are off there. And then you have 4-millimeter hex screws. On some of the other Mazzers, the size of this is going to be different so do note that. And, you can leave them on, you don't have to actually pull the screws out, you can just make sure they are completely loosened. So now you can just go ahead and pull that top burr right on out. Mazzer has made this really easy to calibrate the grinder, which is to set your zero point. And so once you find out what that is, all you have to do is on the top here, there are two Phillips head screws and you just loosen them, you don't have to bring them all the way off. And that allows you to actually turn, you can see the numbers here, to turn and change whatever was your zero point. So you can bring the zero all the way around to right there where the arrow is, and you can set your zero point like that. The portafilter forks on the Major V is different from the ones that were on the old models of Mazzer. So now they've made it not just a fork where you can set your portafilter and you have to hold it but they have these two sort of clamps here on either side that you can set the height of and then you can fit your portafilter in. And it has little...you can kind of see little tabs here on the end that'll grab the rim of your portafilter so that when you do grind, you can fit that in and it should hold it on there for you. They also send in the package two larger tabs here in case your portafilters are taller. If you're using spouted portafilters, you might have to lower this fork here and the use these so that it fits in there. Also on here is a button for portafilter activation, which was not included on previous ones. So when you hit the portafilter activation button with your portafilter, a little goes out. So that portafilter button can actually be changed out for a longer one. So depending on the size of the portafilter you're using, if it's not reaching all the way to the back or if you wanted to dose to a different part of the portafilter, instead of moving this part here, what you can do is you can sort of increase the length of that button, creates the depth of it.