One of the most anticipated grinders in recent memory, the Lagom P64 from Option-O is a single-dose espresso grinder with 64mm SSP flat burrs coated with an indestructible layer of "Red Speed" (titanium aluminum carbon nitride), giving the burrs greater grip on coffee beans and a longer lifespan. The Lagom features a stepless grind adjustment collar, a variable RPM motor (from 200-1400), and near-zero retention grind path. You have a choice of burrs -- the unimodal for brewing and light roast espresso with higher than 1:2 ratios; or the high-uniformity for traditional espresso with blends, medium, and dark roast coffees. 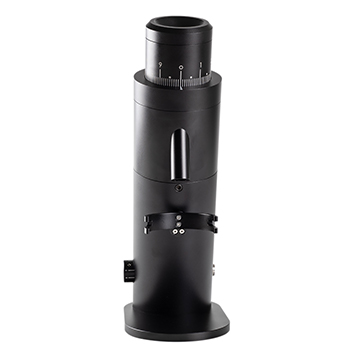 Hi, I'm Steve with Prima Coffee. And today, we're going to talk about the Lagom P64 from Option-O. So, the Lagom P64 is a single-dose espresso grinder. It has 64-millimeter stainless steel burrs that are made by SSP and they're coated in Red Speed which is basically that indestructible layer of titanium, aluminum, carbon nitride, and so, these burrs are going to last forever. And you'll notice on our website when you're buying a Lagom, you have your choice of burrs. You can either get the unimodal burrs or the high uniformity burrs. So both are made by SSP and both are coated in Red Speed. But they have a little bit of a different purpose. So the high uniformity burrs are sort of the traditional espresso burrs. They'll behave a lot like other espresso grinders that you've probably used in the past. If you're shooting for that one to two ratio, if you're using blends, medium roast, dark roast, you're probably going to want to get that high uniformity burrs. There's not a really steep learning curve there. On the other hand, if you want to use a Lagom for brewing coffee in addition to making espresso, then you want to get the unimodal burrs. The reason is because they just produce fewer fines and that's kind of how they were designed so that you could do both coffee and espresso. Another reason to get the unimodal is if you do like Espresso, this is an espresso grinder, but you like light roast and you're going to push those ratios a little higher, you're trying to get all of what you can out of the coffee, all the fruity characteristics, all those floral notes out of light roasted coffee, then you're going to want those unimodal burrs. So because the unimodal burrs produce fewer fines, you're going to notice when you're pulling espresso that the shots might run just a little faster than those shots that you would normally have. And that's not a problem.

It's just that these burrs will produce fewer fines, the flow rate is going to be faster. So the shot's going to come together faster, the shot's going to finish a little quicker, and that is just one reason why you're probably going to want to push it even farther into those higher ratios and you're going to run those shots for longer. Lagom has a variable rpm dial here which goes from 1 to 9. So on the 1, you're going to get 200 rpm and on the 9, you're going to get 1400 rpm. So in our test, this is really interesting because if you grind on the 9, so on the highest rpm, we find that the shots, the flow rate, is actually going to be lower. So what we think is that it's producing more fines, it's producing more resistance than when we grind the shot on a 1, which seems to be because the flow rate is faster that it's producing fewer fines. And that is with both burr sets. So it is an interesting feature of this grinder that you can kind of mess around with that. So another thing you may be able to do is if you're at home and especially if you don't want to waste coffee, if you have it on 9 rpm for instance and the shot is way too slow, you might just dial it down a little bit instead of having to dial in using the grind size. It may allow you to dial in using the rpm. So you have kind of a couple of things to play with. It makes this just even more interesting. So the grind time will change with the rpm as well. When you have it on the highest rpm, an 18 gram shot of espresso will grind in about 13 seconds and if you have it on the lowest rpm, that will take about 30 seconds. The Lagom is an exceptionally quiet grinder. And so, when we have it on the lowest rpm, we're really only seeing about 45 decibels. And when we have it on the highest rpm, we're not seeing much of a difference there, it's getting up into the mid-50s. So still pretty quiet. It's obviously a little bit louder when you have coffee in there, but you could be across the room and not even know that this is on. So this is a single dose grinder. So the hopper here can only hold about 40 grams of coffee. The top of it here has this little guard to keep any coffee from popcorning, basically coming out of the grinder when you're grinding. This portafilter fork, it does fit your standard 58-millimeter portafilters. The wings just fit right into here. But this is also made to fit the grinds catch that they include, which fits just right there on top. So if you're going to make coffee, you're probably going to grind it into this. And if you're going to make espresso, you'll probably grind right into your portafilter. If you do grind into here and you want to make espresso, they include this funnel here. So you can put on the portafilter and you can dose in. It also will fit on your portafilter when you have it on the fork here. The grind adjustment is on the collar here. So you will turn this to the right to make the grind finer and to the left to make the grind coarser. It has nine numbers. So it goes from 0 to 9 along the collar here and between each number are 10 lines. And it's a stepless adjustment system. So all of that is just to help you to find and then recall the numbers you're at for each particular coffee you're using or perhaps each brew method if you're getting the unimodal burrs and you're making coffees and things like that.

Like I said at the beginning, the Lagom comes with all of these things here in front of me. I've already talked about a couple of them but I'll go through them again. This is just the dosing cup. So it's a little steel cup that you can weigh your coffee in and you can dump it into the funnel. It holds about 25 grams, which is great. It's less than what the hopper here can hold, about 50 grams. So the idea is that you will put this, which is your grinds catch or your grinds bin here in its place and then you can dose in with this. This here is your portafilter funnel. So this fits directly onto a portafilter. And then you can dose in without having to spill your grinds. Now, this here is what's called the RDT, or the Ross Droplet Technique, or it's for the RDT, so it's not necessarily you can get any spray bottle for that. And it basically allows you to spritz a little water on the whole bean before you grind. And the idea is that because this is not a zero retention grinder, it's a very low retention grinder, we'll find that it'll hold about up to a half of a gram of coffee for each dose that we're using. And that is because there's this little bit of static and you'll see that when you don't use the RDT here that some static will catch, especially when you're using a portafilter, you'll see it because it will catch here along the perimeter of that portafilter funnel. But that's because of the static electricity. When you use this, it reduces that static electricity and basically, you won't have any of that chaff or anything collecting here on the inside of this. And this here is basically a little whisk. It's used for the WDT, so the Weiss Distribution Tool. You're stirring up the grounds basically in order to, well, two things. You can reduce the number of clumps in there and we know that clumps actually produce channeling because the water goes kind of around those. And also, we just find in general that it helps to distribute the coffee nicely into the portafilter. So generally, we will use this when we're pulling shots. So that is the Lagom P64 from Option-O. You can get it in silver or in black. It's going to come with all these accessories here in front of me. And like I said, when you're buying this on our website, you'll have your choice of burrs, either the unimodal burrs if you like light-roasted coffees, and if you're going to use a Lagom to brew coffee as well. And then there's the high-uniformity burrs which are the more traditional espresso burrs.