This simple, lightweight scale from OXO measures to the tenth of a gram up to six pounds and includes some user-friendly extras like timer, auto shut-off, sleep mode, and touch-sensitive buttons. Watch this video to see how this scale stands apart from others in its class. 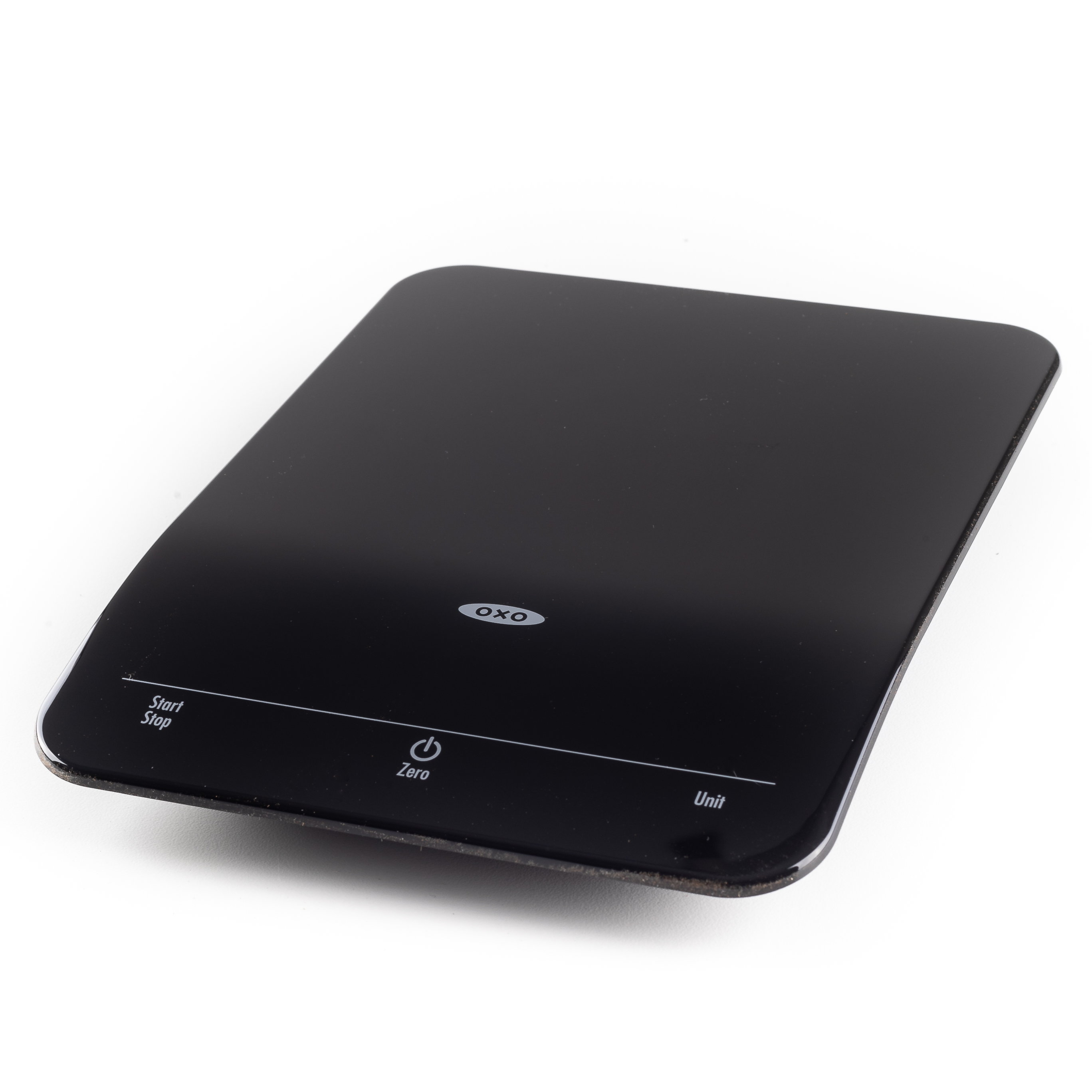 Hi, I'm Steve with Prima Coffee. And today we're going to talk about the OXO 6Lb precision scale. So true to its name, the scale is really precise. It'll measure to the 10th of a gram or ounce and you can measure up to six pounds. And every time it starts up it will recalibrate. You'll see a three, two, one countdown. And when it hits zero you are ready to use the scale. But if something is wrong, so for instance, it's on an unlevel surface, or it can't tare to zero the scale will not turn on. It will get stuck on one and you'll know something's wrong and then you can sort of fix it before you start weighing. It's not very large, it's just 5.5 across, and like 7.5 long. It is a black plastic glossy face, which looks nice but it will scratch. So even though it looks like glass, it'll scratch. And so to protect it from scratches and from heat, it comes with this silicone pad because you're probably using it to weigh coffee. So you'll have hot carafes on here or portafilters to weigh espresso doses. You probably want to keep that pad on all the time. Another kind of cool feature, when you're weighing things is that when you turn the scale on, there is a crosshairs that lights upright in the center so you kind of know where you want to set things. The buttons on here are pretty simple. It just has three buttons on the interface. And they all do what they say they're going to do and not much more. So you have a start and stop button for the time, a power and tare button for power, and for taring down to zero, and then a unit button which allows you to change from grams to ounces, and into pounds. So when you're weighing in pounds, it'll still show you the ounces so that you can have that precise measurement. In addition to that, one interesting little feature it has is this meter in the top right-hand corner that indicates how close you are to that six-pound limit. So the closer you get the higher the meter goes. And then when you hit that 6Lb limit, it'll show you ERR on the screen, and then you know you've gone too far and you won't be able to weigh above that. These buttons are what OXO called touch-sensitive. So you just have to touch them really lightly and the buttons will react, which is true and which is quite a nice feature.

So you're not hitting it a couple of times to try to get it going, especially if you are using this in a café and there's a lot of stuff happening at one time. The weight measurement is in the center, and it is the largest typeface. So it kind of sounds silly but I really think that's useful because some scales, the weight measurement and the time as they get longer they run together. And it is kind of difficult to see which one's which, especially if you are really busy. So one feature that you cannot see is the auto-shutoff which is factory set for 30 minutes, and you can't adjust that at all. It'll always be 30 minutes. You can toggle it on or off though. So when the scale is off if you hold the start-stop button and the power zero button for a couple of seconds, you'll see an A, on-button show up on the middle of the screen. And that's just telling you that the auto-shutoff is now off. I know that it sounds sort of backward but that's what it is. It'll say A on and then you'll see a little A button that shows up when you're using the scale. When that A button is showing up in the top left-hand corner, it means the auto-shutoff is off. So the OXO Precision Scale doesn't have a rechargeable lithium-ion battery, it takes four triple-A batteries and just put them right there in the bottom. And when the batteries are getting low, you'll see a low battery indicator show up. So one of the additional features this has so that you can kind of save battery is there is in addition to the auto-shutoff which happens at 30 minutes, this has a standby mode. So after five minutes of inactivity, the scale will just kind of go blank, so the lights will turn off. Your session will still be there, so if you touch it, it'll turn back on and you'll get to see where you were. So if you walk away or you get distracted, this will sort of keep where you were. So that is the OXO precision scale. Has all the requirements you need for weighing coffee and espresso. It has a unique shape that makes it look really light on the counter, and it has a couple of interesting features such as the touch-sensitive buttons and that weight meter soon.