With its perfect alignment and dribble resistant spout, Barista Hustle's Precision Milk Pitcher is designed to excel at pouring flawless latte art. Every single pitcher is meticulously inspected during production, ensuring a consistency between pitchers that you can count on. Plus, its 6 milk volume indication circles help to eliminate milk waste while boosting repeatability between pours. To discover more, watch along as Steve shares on the Barista Hustle Precision Milk Pitcher.

Hey, guys. This is Steve with Prima Coffee here. Today, we're going to take a look at the Barista Hustle Precision Milk Pitcher. This is a 400 milliliter or roughly 12 fluid ounce steaming pitcher, that takes a little bit more consideration into alignment and consistency between pitchers. So, if you've played with a bunch of stainless steel milk pitchers, you've probably noticed that some of them have handles that might be attached at a slight angle, or spouts that are off center. And sometimes, that actually makes pouring a little bit difficult or somewhat unpredictable. Like if you're a barista, you work at a shop and you have three different pitchers that have slightly different spouts and handles, and they're all kind of at different alignments, you may be pouring off kilter just because you're using a different pitcher. So, the Barista Hustle Pitcher is basically built to eliminate a lot of that variability. 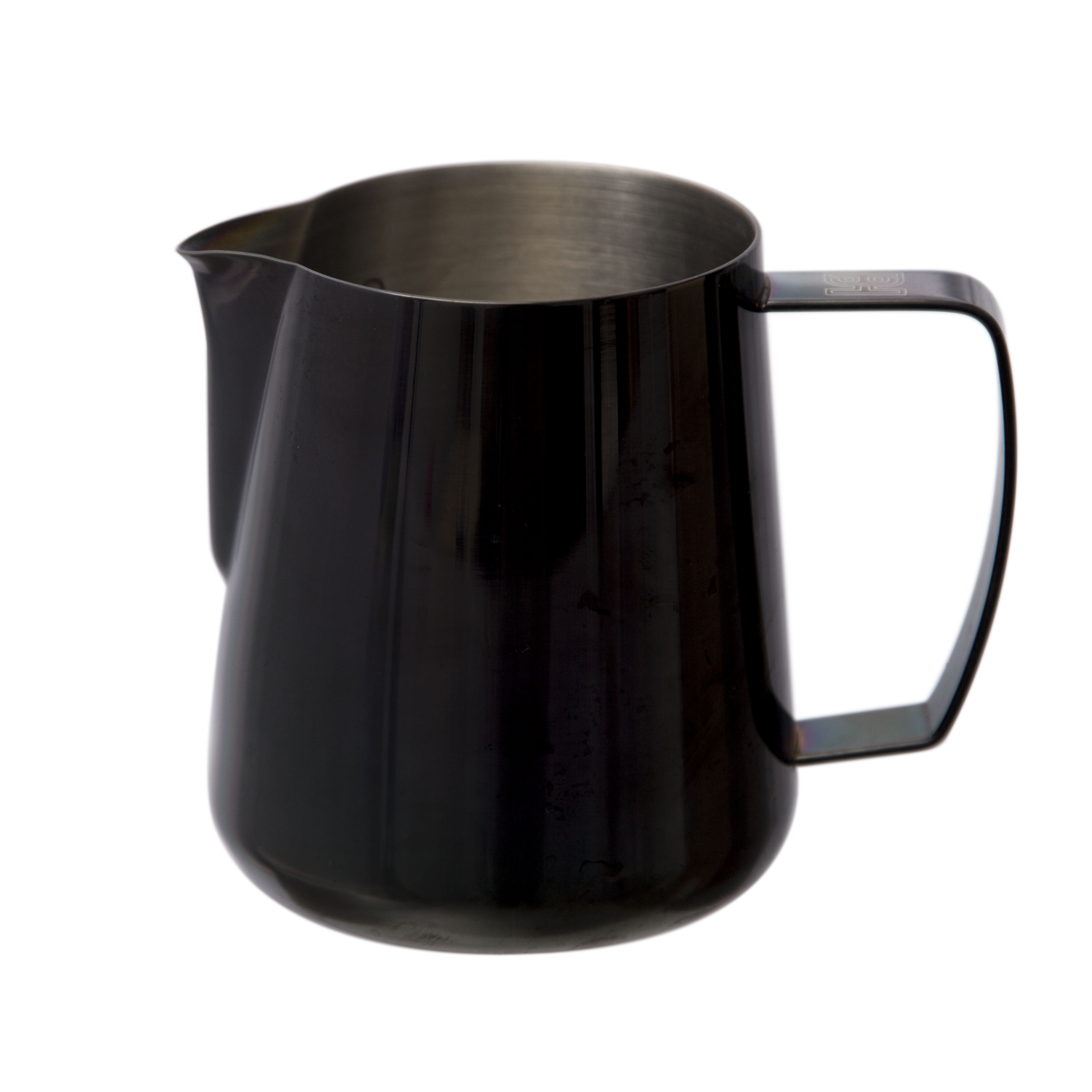 Inspected to be perfectly aligned, down to one millimeter

The way that they make them is pretty similar to other stainless steel pitchers, except that they use an alignment jig to make sure that the spouts and handles are aligned properly. They also have a laser welded handle, so it's not spot welded, meaning that if you drop this on your floor, you have a far lower chance of snapping the handle right off. So, I feel like a lot of us have been there for. So again, yeah. We've got a pretty good spout and handle alignment. It goes right through the center of the pitcher, so you have the center off the mass and the pitcher is well aligned with the handle and the spout, which means that you have an easier time pouring centered designs. Again, it is a 400 milliliter pitcher, and we have these sort of graduations inside the pitcher. So, each of those dots represents another 50 milliliters. The very first one is 100, so it goes all the way up, and then 400 is the very top of the pitcher. So, realistically your practical capacity is right around maybe 200, 300 milliliters or 8 or 9 fluid ounces.

So, really good for cappuccinos, macchiatos, if you’re Australian, you might make some flat whites with this guy. Generally, you're probably not filling it all the way up to the top, just because as you get your milk going and spinning and expanding, it's going to overflow. So, you're probably talking about more like somewhere in here a little bit more than halfway up the pitcher for your practical capacity. So, let's steam some milk with this guy. I'm going to pull a shot real quick. So, you'll notice that we have a kind of black coating on the pitcher, and that is, it's not a powder coat and it's like, a direct coating. It's not the sort of thing that will chip off and wear over time. So, you can rely on them looking nice and sharp without any scuffs or chips. They do pick up fingerprints a little bit, but most stainless steel pitchers will anyway. Doesn't look too bad. Yeah, we'll pull a shot real quick. Grab some milk and we'll get steaming.

So, for this eight ounce cup, I'm just going to pour a little bit below the spout. Give myself a little bit of room to stretch and get the milk rolling and everything. Again, so I have these graduations on the inside, so you can see I'm just above, it looks like I'm just above the 200 mark. So, this is going to be really helpful, especially in a shop where let's say you make a lot of milk drinks, you can use those to gauge consistently, how much milk you need to use for the drinks that you make, which will help cut down on milk waste, which is always a great thing. I'm going to purge real quick here, and then give this guy a steam. So, the design of this pitcher is pretty standard. We don't have anything special going on inside to help making rolling your milk easier or anything like that. Much of the design goes mostly into making sure that it's pretty consistently well-aligned pitcher. So you can, again, rely on that sort of spout and handle angle lining up. And pouring is real nice, just like most other stainless steel pitchers. So, there you go. You have the Barista Hustle Precision Milk Pitcher. Thanks for watching.