Nitro coffee at home is now a possibility! With Hatfields' NitroPress Handheld Nitro Dispenser, you can now craft nitro cold brew and cocktails with ease, no matter where you go. Its uniquely designed nozzle breaks up foam and aerates it to give you that creamy-textured, micro-foam head that makes nitro-infused beverages so great. See the NitroPress in action in this video, as Steve demonstrates making a tasty nitro cold brew.

Hey, folks. It's Steve with Prima Coffee, here. Today, we're going to take a look at the Nitro Press. Now, this is basically a converted whipping siphon, and it's one of the best ways that we found to make nitro coffee at home. And I mean real nitro coffee because we're using pure nitrogen gas canisters, rather than something like this, which is nitrous oxide, the same kind of gas canister that you would use for making whipped cream. Now, people have tried this before. They have tried using nitrous oxide to charge cold brew, and it makes bubbles and it makes some foam, but it doesn't really give you that same texture that you would see in a draft nitro coffee, and there's a few different reasons for that. One of them is that nitrous oxide bubbles are actually larger than nitrogen bubbles, so you create a thicker, fluffier head, rather than a smooth and creamy one. 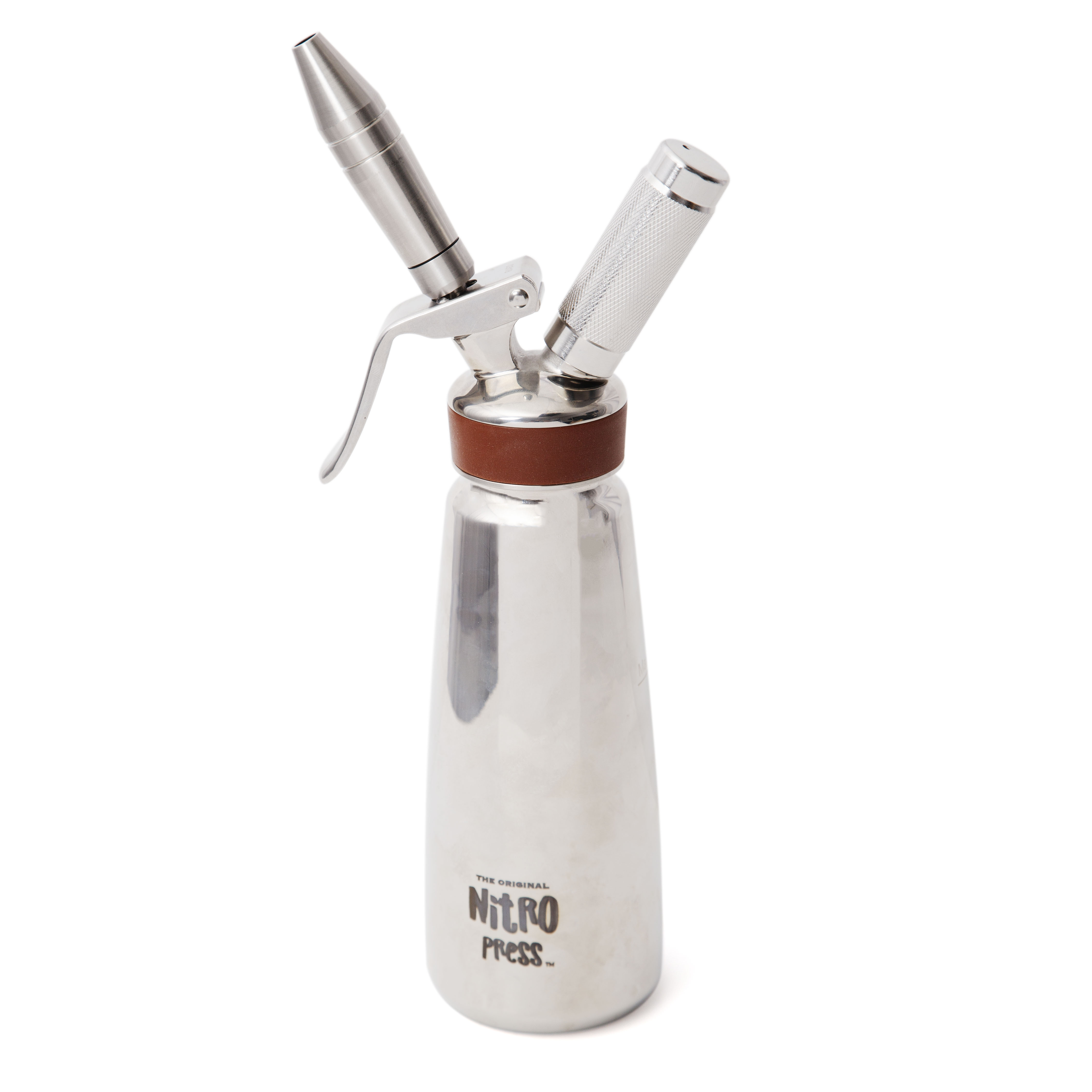 Another reason is that when you dispense out of a normal siphon tip, you don't have any restriction like you would have in a stout faucet, which is what you would use for draft nitro coffee. So the nitro press here actually solves both of those problems. We're going to use actual nitrogen gas, and then their specially designed dispensing tip has a restriction mechanism as well as an aerating nozzle. So it's much more like a stout faucet than your traditional whipping siphon. So just to kind of open this up, like I said, it's basically just a whipping siphon. You have your 500-milliliter canister, here, steel canister. You have your dispensing head, here, a trigger. You've got the actual gas canister holder to screw on, and then you have your dispensing nozzle.

Now, this nozzle will actually fit if you have, like, an iSi siphon, I-S-I. This nozzle will actually fit one of those. It's the same, like, 6-millimeter threaded mounting nozzle. So if you want to put it onto an existing whipping siphon, you can. Currently, we don't sell them separate, but we're hoping that we can. But, anyway, so you have your dispensing tip. Screw it right on to the valve stem. Get it nice and tight. I've just got some plain old cold brew, here, nothing special, pretty average cold brew. It's brewed at about a 1 to...I think 1 to 8, 1 to 10 ratio, and then diluted a little bit. So now, all I have to do is screw my top on, and then I'm going to charge it with just one nitrogen capsule. So just one of these guys. You can get them in packs of 10. You're just going to charge it up, and then you're just going to shake it. So you can shake it for a couple of minutes. You could even shake it and then leave it in the fridge for a couple of minutes.

And, really, the results kind of depend a little bit on how much you shake and how much you let it sit. You need the nitrogen to dissolve into the liquid in order to actually create good, kind of, bubbles when it's dispensed. We wouldn't recommend using too many chargers. It can be tempting to say, "Well, I want more foam, so I should inject more gas." It can be a little bit dangerous. You can over-pressurize the siphon, so you really only want to stick to one, maybe two if you vent off a little bit of air first. But we would really only recommend one. I've shaken it a little bit. I might not have great head. You could take a little bit longer to shake, but in the interest of, kind of, doing a video demonstration, I'm not going to shake it too much. So you see, here, my cold brew is just lighter in color, and that's because, right now, it is full of little tiny bubbles.

So I'll let that just kind of sit and settle for a little bit and talk a little bit about kind of how this whole thing works. Again, we have this nozzle, here. There's, sort of, a restricting tube in this part of it and then an aerating nozzle upfront. So as the liquid is dispensed, it has all this nitrogen dissolved into it. Those bubbles come out of the solution when they hit the nozzle because they hit atmospheric pressure, and then they're small bubbles. So as they're coming out of the solution, they're little tiny bubbles, and then it gets pushed through that aerating nozzle, which helps build a little bit more foam. And as you can see, here, we're getting a nice little head, kind of, settling out.

Now, you don't have to use this just for coffee. You can make cocktails with it. You could even do coffee cocktails. We're going to come up with a whole bunch of different recipes to show you in a blog post. So there's really a lot that you could do with this. It only makes about one drink at a time. Again, it's 500 milliliters. You could do one or two small drinks like this, but 500 milliliters isn't a whole lot. Currently, that's the only size available, but, again, it's pretty nice. And you do get that real nice draft nitro coffee texture out of a whipping siphon, so it's a really cool innovation. Super excited to have it on, and it seems to be a really versatile device, so we can't wait to come up with more recipes for it. So that is the Nitro Press. Thanks for watching.