A hybrid of immersion and percolation brewing, the American Press is a completely new brewing device that’s simple to use and easy to maintain. With its internal brew basket and micro-fine steel filters, the American Press produces a clean, quick brew that’s ideal whether you’re at home or on the road. To learn more about this unique brewer, watch along as Steve shares on the features that make the American Press one-of-a-kind.

Hey. It's Steve with Prima Coffee here and we're going to take a look at the American Press coffee brewer. Now, this is not a French press. This is not an AeroPress. This is something completely different, the likes of which you've probably not seen before. This is a fully self-contained, press-style brewer. It's a little bit hard to describe as it relates to French press or an AeroPress, but you could basically think of it as kind of a self-contained AeroPress, in a way. That's not exactly the best way to describe it because, again, it is kind of unique. Basically, what we have here is this double-wall, press-style brewer. It has about a 12 ounce capacity, so it's good for, you know, one decent-sized mug, or maybe two smaller ones to share. And then, we have this press basket on the inside, which is pretty unique because instead of putting your coffee in the bottom of the brewer like you might do with a French press, you're actually going to put it inside this basket. Each side has a 100 micron stainless steel mesh on the top and the bottom. 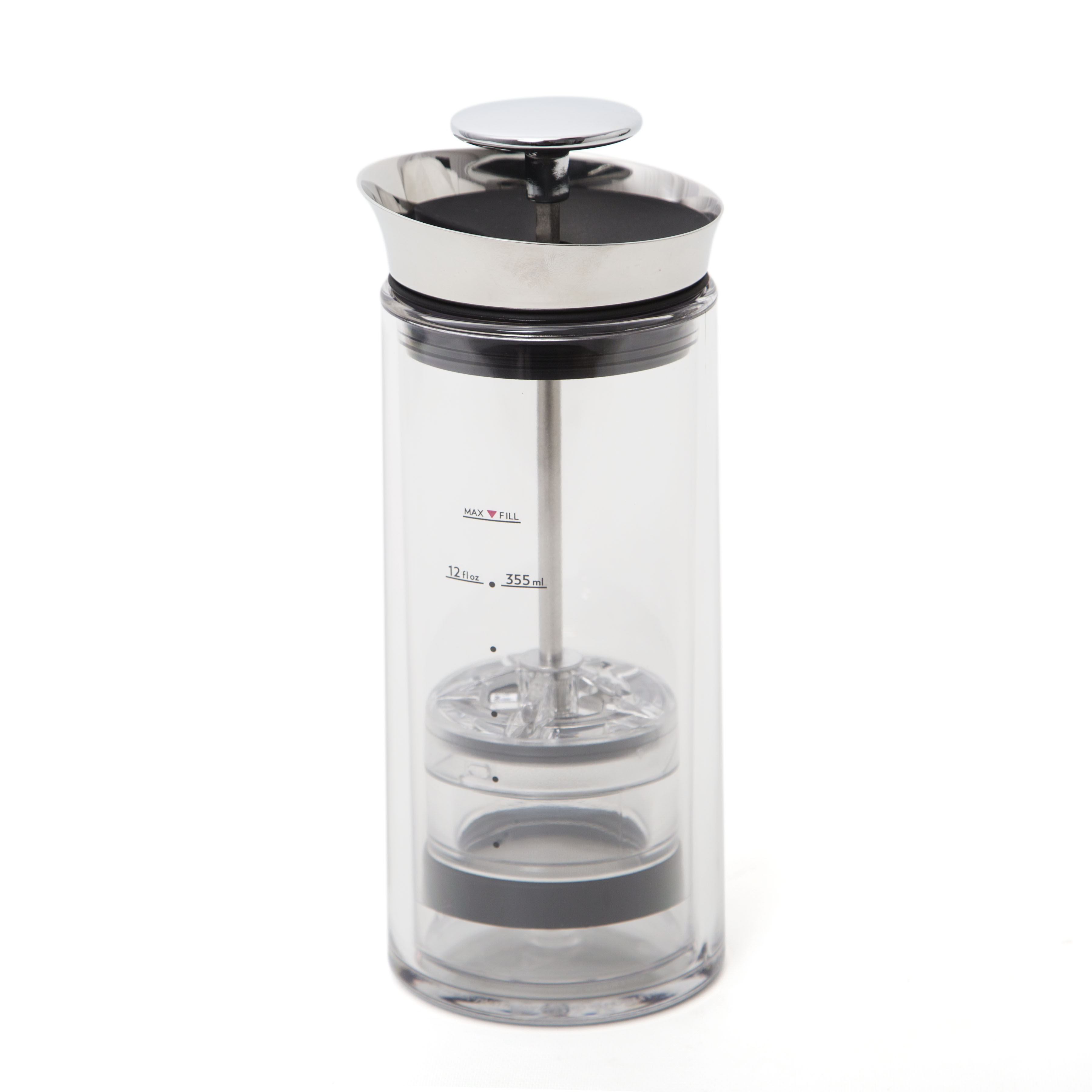 Stainless steel filters give good body without the mud

So, you put your grounds on the inside, close it up, and there's a little rubber seal to keep everything nice and contained, and then you're going to put your water in the brewer part itself. As you brew, you're basically going to slowly press this basket of grounds through that water. And in fact, it's not a steeping action that extracts your coffee, but rather a percolation action as the water goes from one side to the other and kind of flows through the bed of coffee, like it might in an espresso machine, or a moka pot, or some sort of similar, enclosed, percolation-style brewer like that. So, I'm going to go ahead and start brewing with this, so you can kind of see what's going on. I have 19 grams of coffee that I'm going to throw into my basket. And this is just sort of a medium ground. You can play around with your grind size. This would be sort of like a basket-style, like a Bonavita brewer kind of grind, but you can play with different grind sizes, and play with your recipe and brewing style, as well. There is a little bit of versatility there. So, 19. There we go.

Now, the way that the manufacturer recommends brewing is to sort of slowly press this basket through the water, but I'll tell you a couple different modifications that we found work really well. I'm going to add a little bit over 300 grams of water to my press here, and you'll see, it'll be mostly full once I'm there, and then, I'm going to start pressing. So, the really cool thing about this is that, as you press, you'll see that basket of coffee get fully saturated. You'll feel a little resistance as the water starts to move through the grounds, and then, I'm basically just going to slowly press down over the course of a couple different...or a couple minutes, rather. And you'll see the coffee flowing out of the top is nice and extracted, it's nice and brown, and this big gasket at the bottom prevents those from mixing. So, you have pure water at the bottom right here, brewed coffee at the top. Now, what we found is that you could... If you grind a little bit finer, you can basically press all in one go, just sort of like an AeroPress, or if you're doing a little bit coarser grind like I am, you can actually extend your brew time a little bit more and draw out a little bit more sweetness.

And then, one thing that I'll do is actually, once I get closer to the bottom, I'm going to stop. I'm going to pull up on the plunger slightly and that's going to actually draw some of that brewed coffee back down through the bottom. It is going to mix it, but again, a lot of extraction is taking place as the water flows through the coffee bed, regardless of whether it's extracted or not already. So by moving up and down you can actually get a little extra extraction. I'm pushing it down now. So, you're able to get sort of a cross between AeroPress-style coffee and French press-style coffee, because it's not a true immersion brewer, but depending on how you go about actually brewing...again, like I'm sort of plunging up and down right now. This is an optional way to brew coffee with this device. You can get a fairly heavy-bodied coffee with very little silt, no mud, as you might find in a traditional French press. You can... We found stick a paper filter. Before you close that basket, you can put a paper filter on top. We recommend wetting it first, and then, you can screw it in place. AeroPress filters work quite well for that. So, you can actually get a little extra filtration, that sort of cleanliness from a paper filter. So, during the final plunge, it will basically keep all the fines and a lot of the oils retained in the basket or below.

But now, I'm essentially done brewing here and I have a coffee that's going to be a medium-bodied coffee. It will have that full, sweet extraction that you expect from a French press with pretty much no grit, and only a little bit of a surface oil. You can see, the foam on top is some of that emulsified oil, and some of those carbohydrates and So, like I said, kind of a cross between a French press and AeroPress-style coffee. Really an interesting brew, or very unique, and it's a great device to bring with you if you're going on the road. It's really great for, like, road trips. Really easy to take apart and clean afterward, because again, you have that sort of basket of self-contained coffee, so all you need to do is separate it, dump it in the trash, give it a quick little rinse or a wipe out. Much, much easier to clean up than a traditional French press, and again, a little bit versatile, too. So it's an interesting and new, unique way of brewing coffee that has some flexibility in how you actually get your end product, so there's kind of a lot of room to play around in and dial in your coffee is the way that you like. So, that was the American Press coffee brewer. Thanks for watching.