If you own one of Kinu's M47-series hand grinders and want better performance for pour over brewing, consider adding the coarse burr to your grinder! In this overview we will cover how the differences in performance and flavor versus the stock cone burr, as well as how to install the burr on your Kinu grinder.

Hey, folks. It's Steve with Prima Coffee. Today we're taking a look at Kinu's new Coarse Burr or Pour-Over Burr for their M47 series hand grinders. One of the maybe complaints I suppose, that the M47 series has gotten is that it's not the best for pour-over grinding. Once you start getting up past the fine sort of V60 grind, you start to see more fines built into the grind quality that you get. You start to get a little bit of muddy flavors and muddy appearance in your brews and it just seems like it could be a little bit better. There isn't really always a good like single all-purpose burr set so Kinu decided that they would create a new center burr or cone burr that gives better results in that coarse sort of range, you know. Once you start getting up to maybe an 18, or a 25-gram brew with a V60, or a Kalita wave, or even a Chemex to give better grind quality, fewer fines and more uniform particles in those coarser pour-over settings. So far, in our opinion, the results are great, actually. 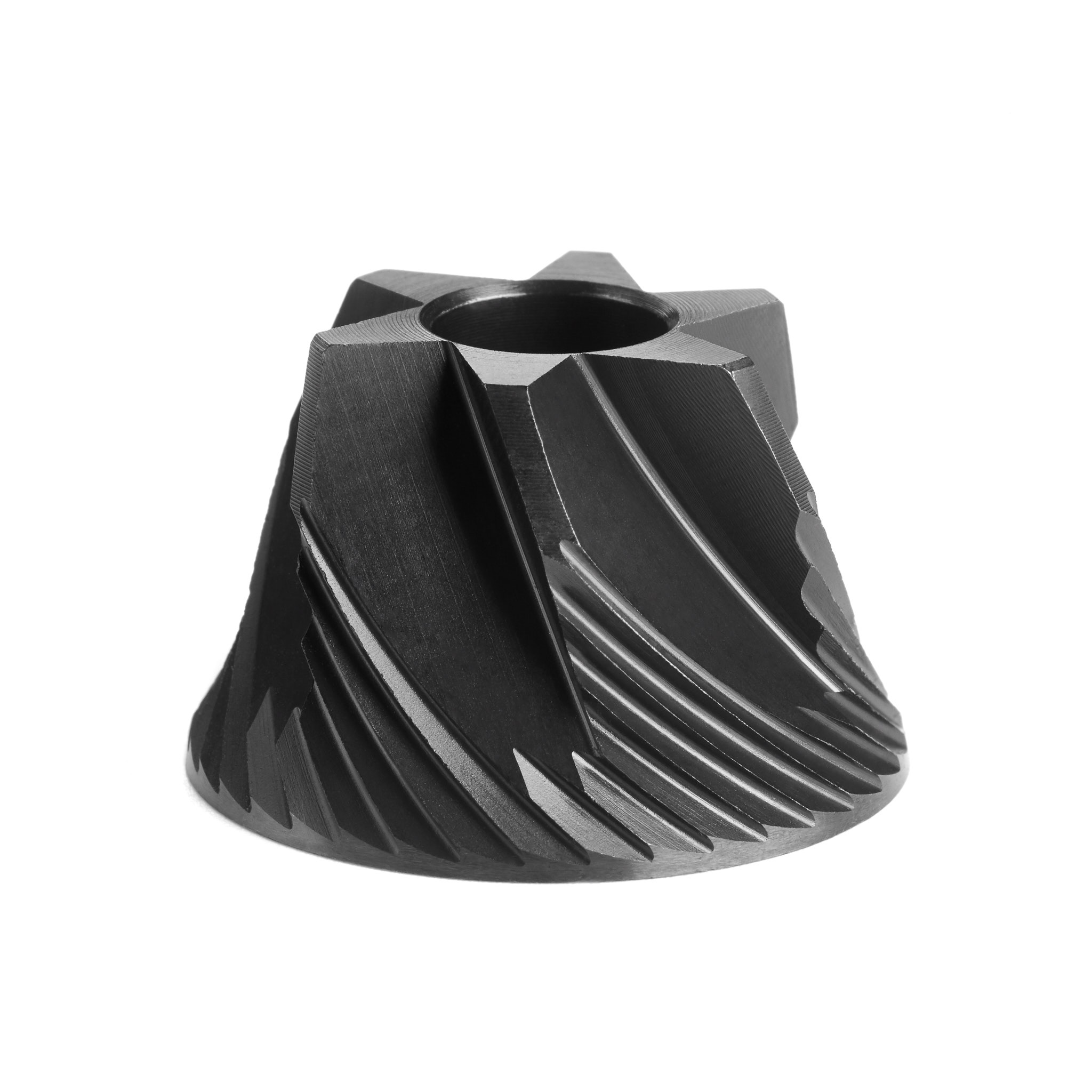 Improved grinding for pour over and batch brewing

They've really accomplished what they were setting out for. They've cleaned up the brew, you can actually even use this burr for espresso but there is a drawback that I'll get to. First, I'm going to show you how to install this in your M47 hand grinder that has a standard burr installed. The first thing I'm going to do is just remove the thumbscrew from the top. Just unscrew it counterclockwise, pull it all the way out and then I can pull the handle and the top nut off and I'm going to get rid of my grinds catch and I'm going to use a finger just to hold on to the bottom burr and keep it in place while I unscrew the adjustment ring. Once that's off, I'm just going to pull the driveshaft straight down and then I have my cone burr and my drive shaft free. I'll just remove that spring off the top and then when it comes to pulling the cone burr off, it's just pulling straight up and now I'm ready to install my new coarse pour-over burr. When I insert that back on, I just need to make sure that I'm aligning the hole in the base of the burr, there's three of them, with the pin on the sort of burr carrier. Now that's pretty easy to do, you just slide it straight back down on that shaft, you can give it a twist and make sure the pin is locked in place and that's all you need to do.

So now we can kind of go in reverse and reassemble. Spring on first, then the driveshaft can go back up through the grinder, make sure that you insert it through the bearings. It will push straight back up. Now I can add my adjustment wheel back and I'm actually going to screw it all the way down to zero. So until it stops turning pretty much. All right, we're nice and firm there. Now I have to put the drive nut and handle back on. Just note that the drive nut has an asymmetrical cutout that corresponds to the sort of D-shaped post on top of the drive shaft. It's pretty easy to align, just stick it on in place, and then we can put the thumbscrew back in. Just align that through the hole in the handle and screw it all the way down. Okay. So the next thing that I'm going to do is actually set it to a pour-over setting. I have it fully zeroed out, which actually on this grinder it happens to be zero. It isn't always the case, it may not be zero, it could be somewhere close to zero, that's fine. I'm going to turn this dial for full rotations from zero to coarsen and that will get me somewhere in a pour-over range. You may find different and of course, it depends on your dose size, the brewer you're using and how you prefer to grind your coffee for that brewer.

So I'm going to go four full rotations which is approximately somewhere on the fine end of a V60 brew and I'll demonstrate one of the key changes that we've noticed with this burr. If you've read a little bit about this burr already, you might have heard that it actually grinds slowly. It seems to feed beans a little bit more slowly, it still grinds very smoothly, but it doesn't seem to have quite as fast of a grind output. So your grinding times for the same relative settings say I grind at four full rotations with the standard burr, I might be grinding almost twice as long with this new coarse burr. So the grind quality and output quality, the overall uniformity is better but the actual grind speed is slower. I'm grinding right now and I'm noticing that I'm not feeling as much resistance as I would with that standard burr. And I might be grinding for maybe a minute, a minute and a half for this grind size and this dose of 20 grams of beans which might be maybe one and a half to two times longer than the standard burr time. For espresso, you might take two minutes or three minutes to grind a full dose. That's a pretty significant change.

So we don't really recommend this for espresso brewing just because it can be kind of tiresome. It takes quite a long time to grind and at that fine setting, you are feeling quite a bit of resistance. So we do recommend it for pour-over brewing, it does have good quality results so you just sort of have to accept I suppose that the grind time is increased. It's still very easy to grind, it still feels very smooth, thanks to Kinu's build quality in their hand grinders. I don't really know personally enough about burr geometry to account for the difference but it just seems like it doesn't quite grab as many beans while it's rotating. You definitely feel less resistance as you turn. Again, however, we are impressed with that uniformity. When we brewed with it, we noticed that the cup quality's cleaner, you have more flavor vibrance, you know, you have more discernible flavors in your brews, and even visibly, the brew beds are not as muddy as they were with the standard burr. So definitely an improvement there.

And as I'm just finishing up my dose here, I can see that it's taking a fair bit longer than the corresponding standard burr but my grind quality is actually pretty nice. I've got a few boulders in here because it's a somewhat coarser setting, but overall, it is not as kind of clogged up with fines as I might expect with the standard burr. So again the grind quality is a pretty considerable improvement. The flavor in the cup, for sure is an improvement and overall, we're pretty happy with the addition of this new coarse burr, we think you will be too. So that is the new coarse or pour- over burr by Kinu, thanks for watching.