The Silvia Pro is an entry-level dual boiler, dual PID home espresso machine with several welcome conveniences like adjustable brew and steam boiler temperatures, variable drip tray height, and automatic back-flushing. Other user-friendly functions include automatic wake-up and shut-off. In this video, Steve introduces the machine and talks through its many features. 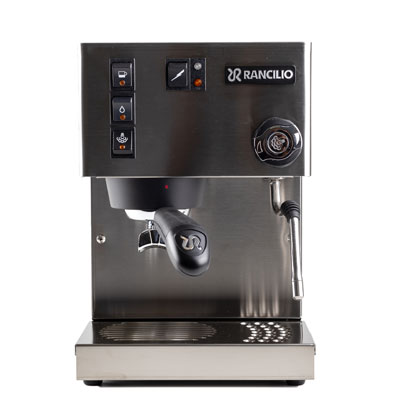 Hi, I'm Steve with Prima Coffee. And today, we are going to talk about the Rancilio Silvia Pro espresso machine. The Silvia Pro, unlike the regular Silvia, is a dual-boiler machine. So, what this means is it has a boiler for brewing and it has a boiler for steam. So, you can make lattes, you can steam milk and brew coffee at the same time. They've also put PIDs in both those boilers, which means that the temperature should be really consistent, really stable, and the reading of the temperature should be correct. To fill those boilers, there is a two-liter water reservoir in the back here, which can be removed for cleaning, but probably shouldn't be removed just to fill with water because you'd have to take out the inlet hose. Machine is pretty small. It only weighs about 45 pounds, and it's about 15 inches high and deep. And it only has these four buttons on the face that you can use along with this knob for steam.

Interesting thing about steam is the wand comes with the silicone sleeve, but the steam wand is not a cool touch wand. It gets very hot. And this sleeve doesn't really seem to keep the temperature from coming through. So, it's really hot. I would recommend using a towel when you use that. The drip tray is adjustable. So, to raise or lower it, you'll need to remove the grill and the tray underneath it here, and you'll have access to four nuts that you can unscrew. And then there are three notches that you can move that drip tray up or down into and then screw it back in and it will be adjusted. To get into the menu here, you need to hold both the plus and the minus buttons for about three seconds, and then it will open the menu. The only function that's available to you without that is the temperature of the brew boiler, which is the reading that you'll see when it's just sitting here idle. It's at 204 now. If you wanted to change that, you would just hit the up or down button, get it to where you want, and then hit the brew button, which functions as an Okay button.

So, you can go as high as 212 and as low as 185 on that. To get into the steam boiler, you will need to again, hold the plus and the minus, and it'll bring you into the menu with the first one here, it's T2. So, temperature one is the brew boiler, temperature two is the steam boiler. Hit Okay, meaning you want to change that, and it says it's set at 256. Where do you want to set it? You can go as high as 257 and as low as 248. And once you've reached to the point that you want, hit the brew button, which again functions as that Okay. When the steam boiler is heating up, it has this blue light here that will be blinking. And when it's on, the blue light will be on. And when it's off, the blue light will be off. You can turn the steam boiler off at any time if you just want to make espresso by hitting that second button there. Just hit that, and the steam boiler is now off, and you have your brew boiler to use. The other button on here is for hot water dispensing.

If you hit this button, hot water will come out of this dispenser here. And it'll bring a lot out of the boiler, so it'll fill the boiler with just bringing a little water out. The water is very hot and probably not right for a lot of teas and things like that. So, it's probably just used to clean glasses or to clean the portafilter. So, it comes with this double-spouted portafilter. It is a 58-millimeter basket that's in here. It has both 8 grams for singles and it has 16 grams for doubles, which is still pretty small for a lot of us. We found that you can fit an 18-gram VST basket in here, no problem. But you can't fit a 19-gram basket in here. So keep that in mind. The portafilter here has this double spout, and it is stainless steel. It's actually quite heavy. The handle though is made of plastic, and it's quite light. So, you can really feel the difference. It's pretty top-heavy. So, it also comes with this tamper which is pretty nice for home espresso machine. It has a stainless steel base and a black wood handle. It's 58-millimeter, so it fits really nicely into the basket.

To pull a shot, you just dose, tamp, insert the portafilter, and then you press this brew button here. You press it to start, and you press it to stop. So, you cannot program shots by time or by volume with the Silvia Pro. To steam milk, this actually has a really good steam power, and we found that it's relatively dry steam as well. So, you won't add too much of that water weight to your milk as you're steaming it. One kind of note with this is that it hits the tray regardless of where you have it set. For cleaning, they do give you this blank basket silicone cover here. So, when you'll do the cleaning, you'll drop that in. One of the cool functions of this machine is that Rancilio has included an automatic cleaning function. So, all you need to do is go back into the menu, when it comes up, go to function number one, hit Okay, and then hit Okay again, and the function will go ahead and run for you.

You'll need to be there because there are three sections of that function. The first one includes one of these cleaning tablets, the second one is just to rinse the portafilter, and the third one is, without the cleaning tablets, but with that blank in there. The other functions you have, there is a wake-up timer, and there is an automatic off timer. So, to get to the wake-up timer, again, go back into the menu. And the wake-up timer is function... Go through to function number two, hit Okay. And then, it's written in hours. So, whatever the hours are being shown here, so 15 hours, hit Okay, that means that the machine will wake up 15 hours from right now. So, it doesn't actually allow you to set the time, such as 6 a.m. every morning. You'd have to set it every single time that you want it to be woken up after those hours, so every single night, presumably. So, you can see now, because I've done that, the machine is off.

It's just showing that one dot right there, and in 15 hours, it will turn on. One of the other functions on here is the automatic shut off. Into the menu, it is function number five. So, get into the menu, scroll over to five, hit Okay. And this reading is in minutes. So, it says here that it's 15 minutes automatic shut off, 30 minutes, 60, or 120. That's as high as you can go. So, the wake-up timer is in hours, and the automatic shut off timer is in minutes. So, once you've hit that, you hit Okay, and then it will shut off after that many minutes of being idle. So, that is the Rancilio Silvia Pro. It's a compact design, so it will fit under your cabinets, on your kitchen counter. It's a really nice value for this price, and it includes some nice automatic features. You can find this online at primacoffee.com. Thanks for watching.