When you come across rules like these, do you ever find yourself asking, "Says who?" From water temperature ("off boil") to tamping pressure (30 pounds), these fuzzy standards are everywhere, yet widely accepted.

The world of specialty coffee is full of standards and status quo. Some are instrumental to our progress and help to define us as an industry. Others, though, have little to no supporting data or objective value. When you come across rules like these, do you ever find yourself asking, "Says who?" From water temperature ("off boil") to tamping pressure (30 pounds), these fuzzy standards are everywhere, yet widely accepted.

One that has intrigued me lately is the freshness of ground coffee and its relative importance when compared to other variables like uniformity of grind. We’re told, "Grind and start brewing as fast as you can!" or, "Don't pre-grind your coffee the night prior!" This urgency has been etched into my soul for a decade. But are there circumstances in which it is possible to bend the rules for a better cup? I’m going to tackle this by comparing two distinct scenarios: using a high-end commercial grinder to pre-grind for a week's worth of brews and using an average home grinder to grind fresh, daily. 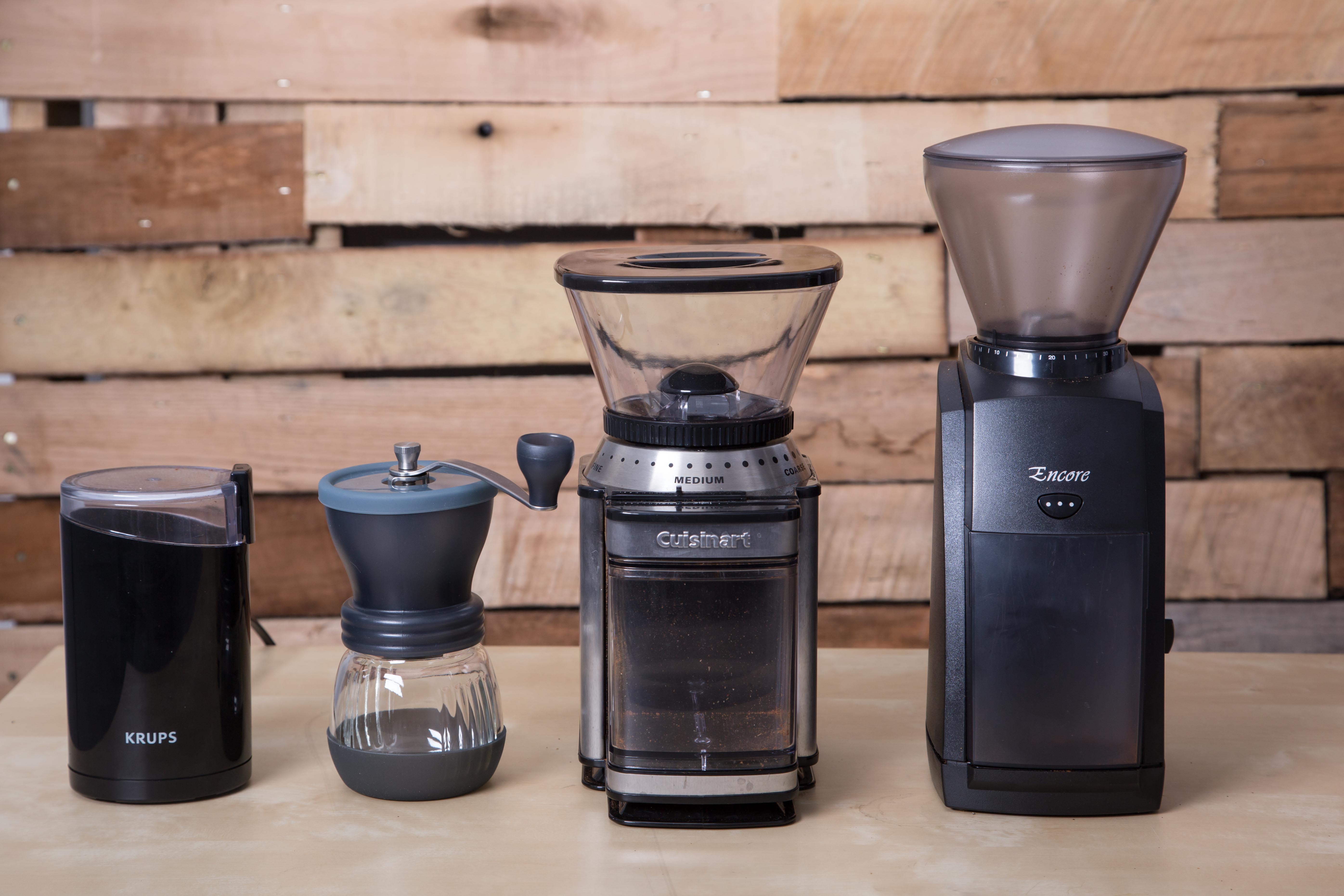 Let’s assume you purchase a bag of beans from your local coffee bar or grocer on a weekly basis. Generally, coffee bars will be happy to grind those beans at a setting that accommodates your brewing method. Pre-grinding your beans with a commercial grinder is convenient -- especially for those who don’t own a grinder -- but there is a more important advantage to commercial grinders. In comparison to the average home grinder, commercial grinders often produce a more unimodal particle distribution. This means that a higher percentage of the coffee particles are the same size. Reasons for this include increased power as well as larger and higher quality burrs. Although there are other contributing factors, the level of unimodality directly correlates to the potential uniformity of extraction of your coffee grounds. In terms of taste, high unimodality translates to a lesser perception of imbalance between under-extracted, well-extracted, and over-extracted flavors, and a more acute focus on one of those 3 stages.

Even when a commercial grinder is used, pre-grinding has its drawbacks: when coffee is ground the amount of surface area exposed to the air increases exponentially, increasing oxidation and the rate at which its aromatic compounds volatilize. Within a shorter time-period than whole beans, pre-ground coffee loses its aromatic subtleties and begins to taste ‘stale’. This information leaves us with an interesting question; in the context of flavor, at what point after grinding do the advantages of highly unimodal grounds become less advantageous than fresh, less unimodal grounds? 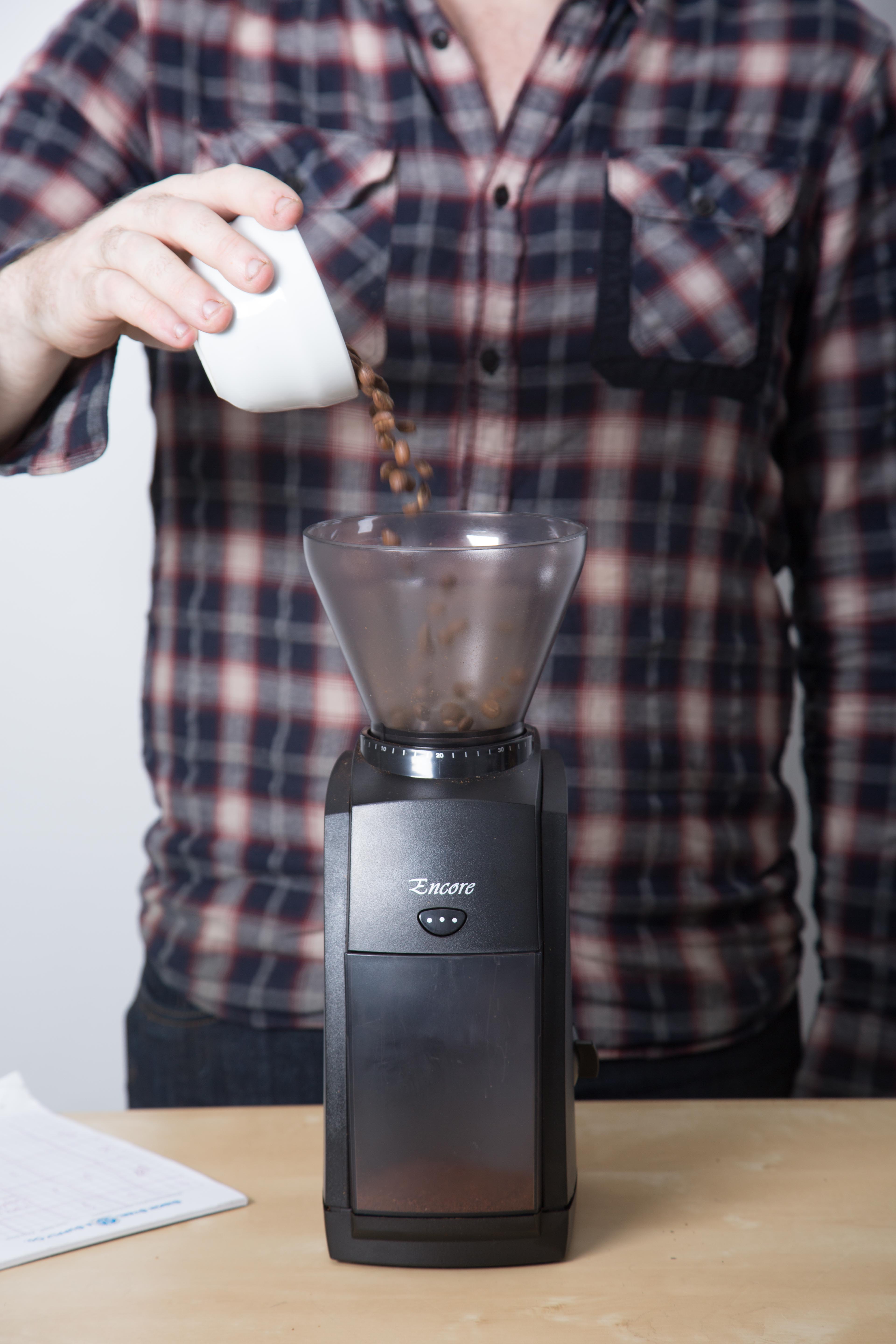 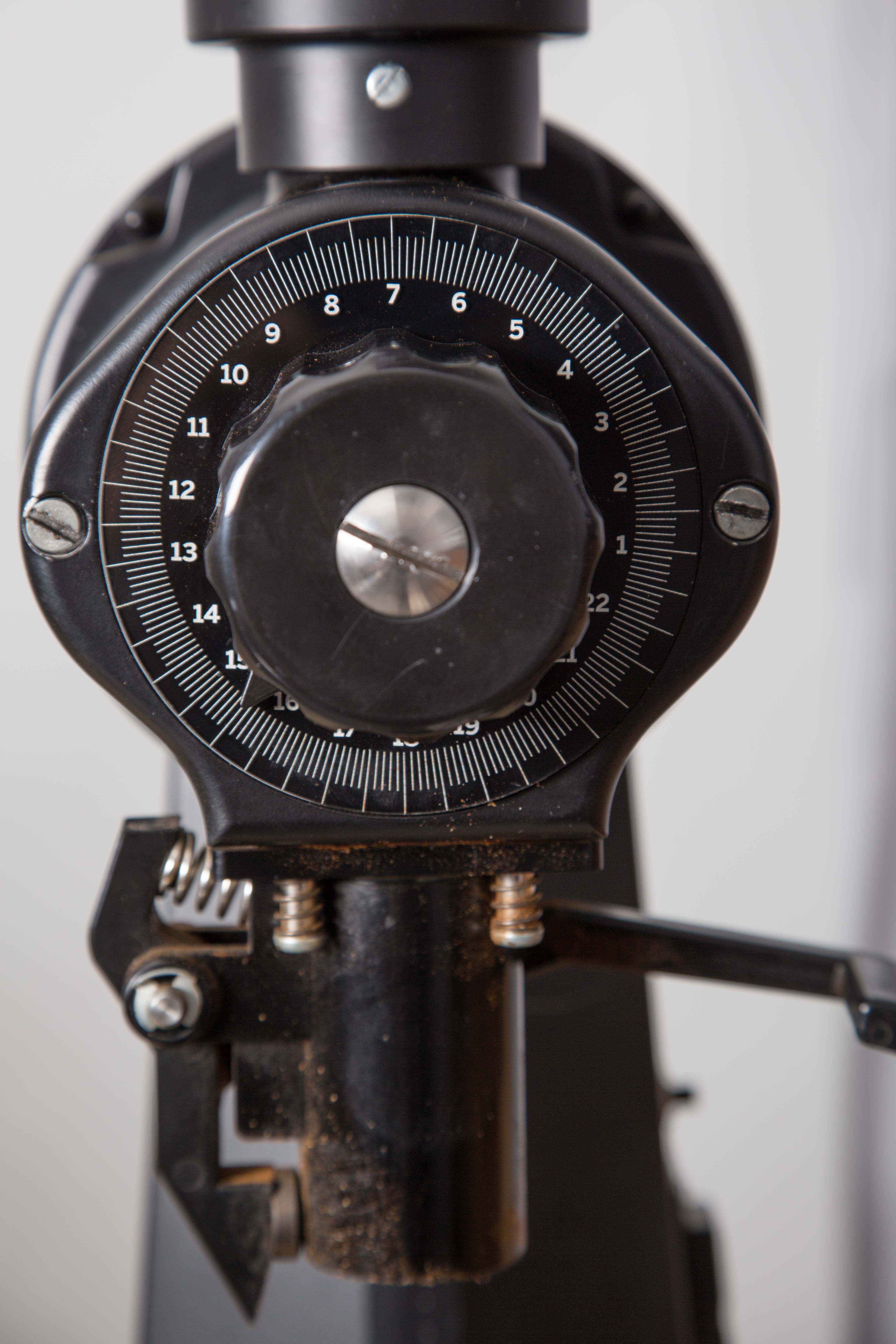 We set up a 10 day experiment (2 coffees in 2 weeks) to experience the results for ourselves. The Mahlkonig EK43 was chosen as our commercial grinder, and the following home grinders were also used on a day-to-day basis:

Using an Ethiopia Yirgacheffe Kochere from our Louisville friends, Sunergos Coffee Roasters, and a Guatemala roasted by our friends at Quills Coffee Roasters, we first dialed-in our EK43 for use with our brewer -- the Bonavita 1900TS. The Bonavita was chosen not only for its ability to brew well but also because it would brew consistently. We then pre-ground 5 days worth of brews. On each day we ground fresh and dialed-in each of the home grinders for use with the Bonavita, then compared the results against the pre-ground coffee from the EK43.

After just a few days of repeatedly dialing-in each grinder, the ranks were clear. In the graph below, the spaces between the ranks on the Flavor axis are a visual representation of the opinions of Prima’s focus group and reflect only anecdotal quantification. The Cuisinart, Skerton and Krups were tested for 5 days. In the second test, only the Encore and EK43 were compared to confirm our results. Each day, the Encore and EK43 brews were evaluated by approximately a dozen members of our team. The coffees were brewed consecutively on the same brewer, tasted blindly, and evaluated as a set on a "I like this cup better, here's why" basis. 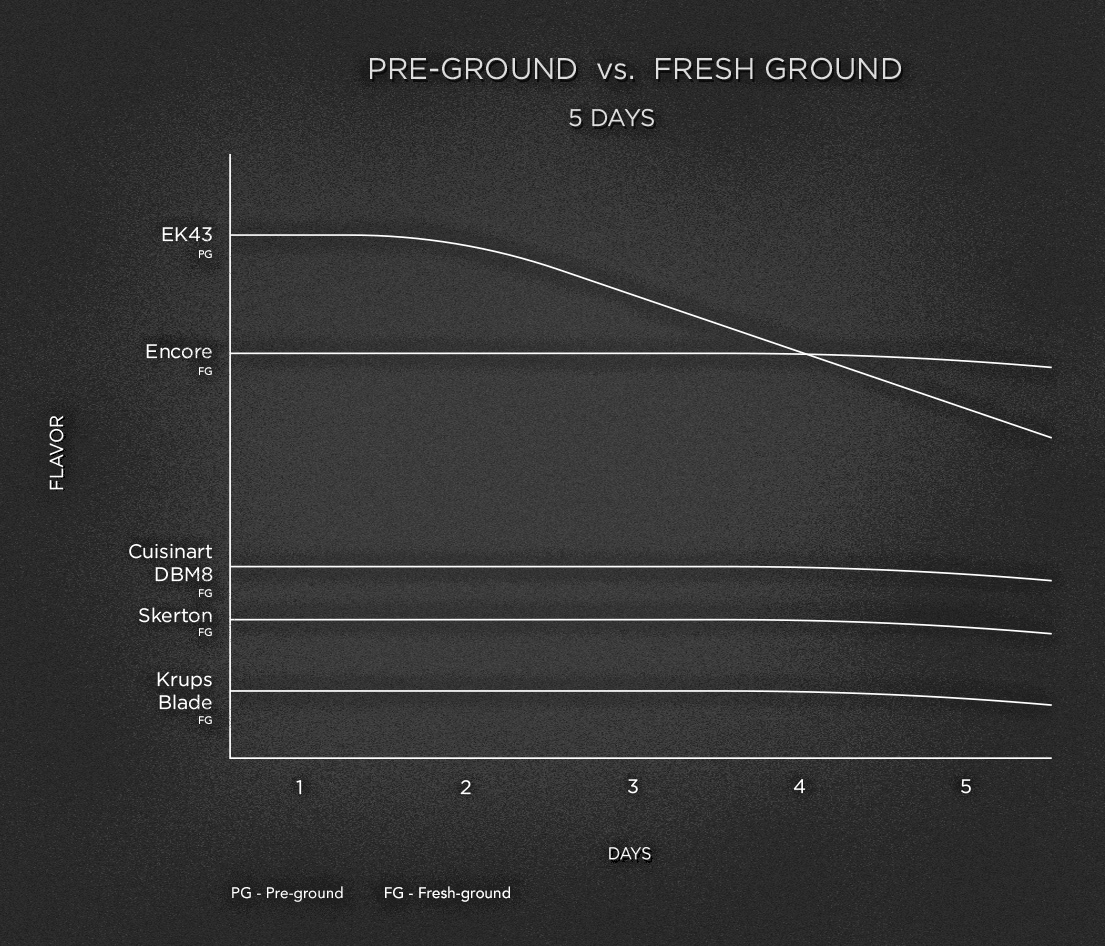 Due to its random distribution of particle sizes, the blade grinder was characterized by extreme imbalance throughout the week. It’s also very difficult to replicate a grind size with the same precision as a burr grinder, resulting in inconsistency between brews. The commercially pre-ground coffee tasted far better all the way through to the end.

The Cuisinart is a common ‘burr’ grinder that has many of the same features as higher-end home burr grinders. Unfortunately, it uses faux burrs that are unable to match the performance of real burr grinders. It certainly had more balance and consistency than the blade grinder but was characterized by an imbalanced extraction and, in our opinion, did not taste better than the pre-ground coffee throughout the week. 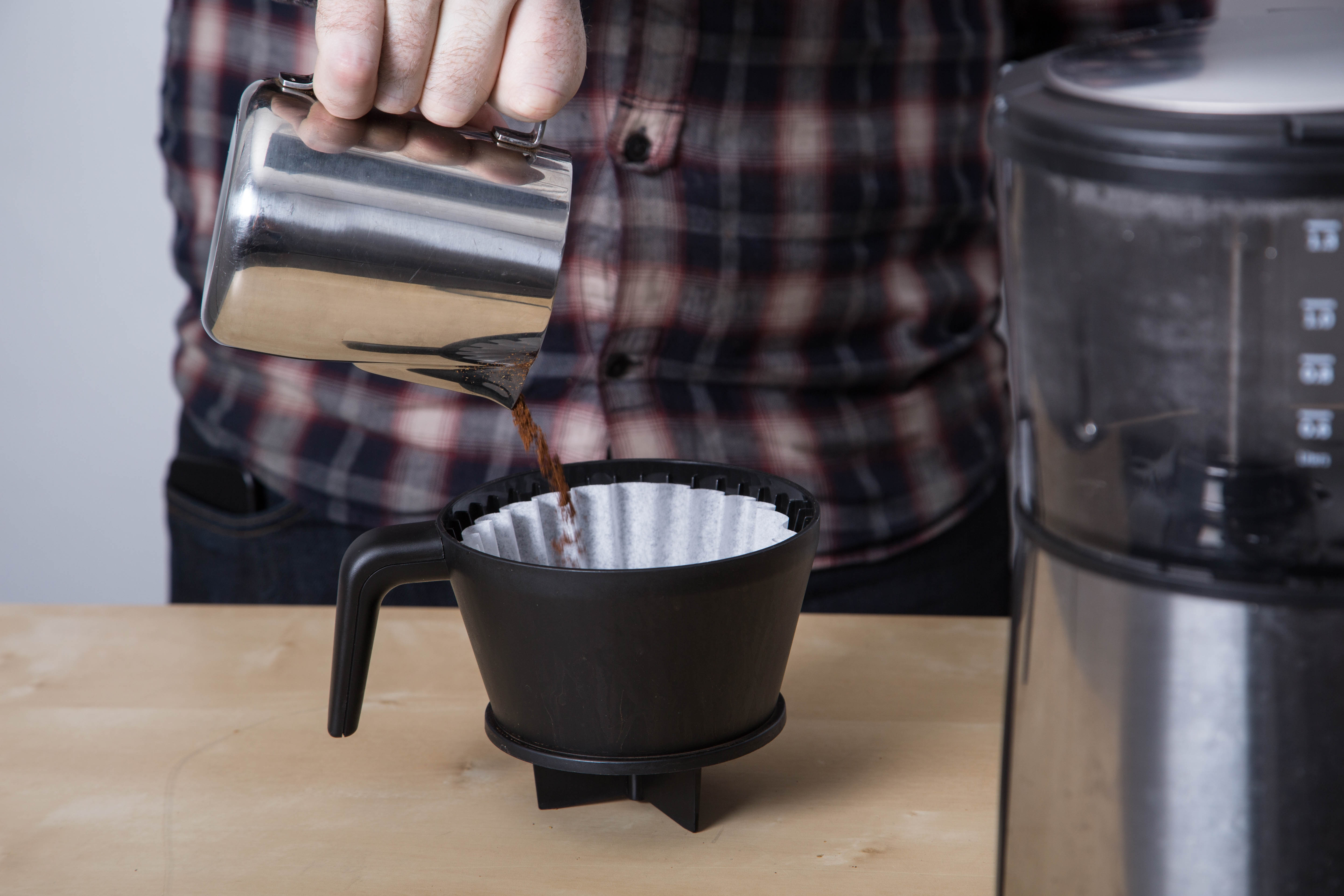 One of the most popular burr grinders out there, the Hario Skerton is set apart from every grinder in this experiment because it is fully manual. The benefits include a very low price tag, easy storage, and mobility. We found that the Skerton produced very similar results to the Cuisinart DBM-8 in terms of balance in extraction. Over the course of the week the pre-ground coffee’s flavor balance consistently won out the fresh flavors from the Skerton.

The Baratza Encore is a game-changer for those seeking an affordable, quality home grinder and is loved by professionals and modest home brewers alike. It features 40mm hardened steel conical burrs and a strong electric motor. The result is unimodality that is superior to most home grinders on the market and higher flavor-quality potential. The Encore still produces a cup with noticeable imbalance in extraction (a mix of sour, sweet, and bitter flavors) but it is less apparent than the other home grinders used in this experiment. The flavor quality of the Encore’s brews were the closest to the EK43 throughout the week.

Still the most sought after commercial grinder in the specialty coffee industry, the EK43 features monstrous 98mm steel burrs and a 1.75 horsepower electric motor. The unimodality of its grind is unmatched by most other shop grinders, which means it provides some of the most acutely focused and balanced extractions possible. As seen in the graph, The EK43 initially provided a higher flavor quality than all other grinders used in this experiment. On day 2 we anticipated a significant quality loss in the pre-ground brew, but were surprised to find that it had maintained probably 95% of its character.

On day 4, where the paths of the EK43 and Encore meet on the graph, we felt that the degradation of pre-ground coffee from the EK43 roughly matched the flavor quality of the fresh ground Baratza Encore. By day 4 the EK43 maintained its wonderful balance in extraction but the stale, oxidized flavors really kicked in and the coffee became more dull. The fresh ground Encore maintained its aromatic subtleties, which helped make it more competitive with the EK43.

What do these results mean for those who brew at home?

I’m as surprised to say it as you probably are to hear it -- if you drink a lot of coffee, say a bag every 5 days, you should absolutely give pre-grinding a shot and compare it against your fresh ground brews. For those brewing a single cup every morning with a quality burr grinder, emptying a bag of coffee every 10-14 days, it is probably advantageous to continue doing so. You could also ask your barista to grind part of the bag at the shop, brew through that part for 3-4 days, then fresh-grind the rest at home. 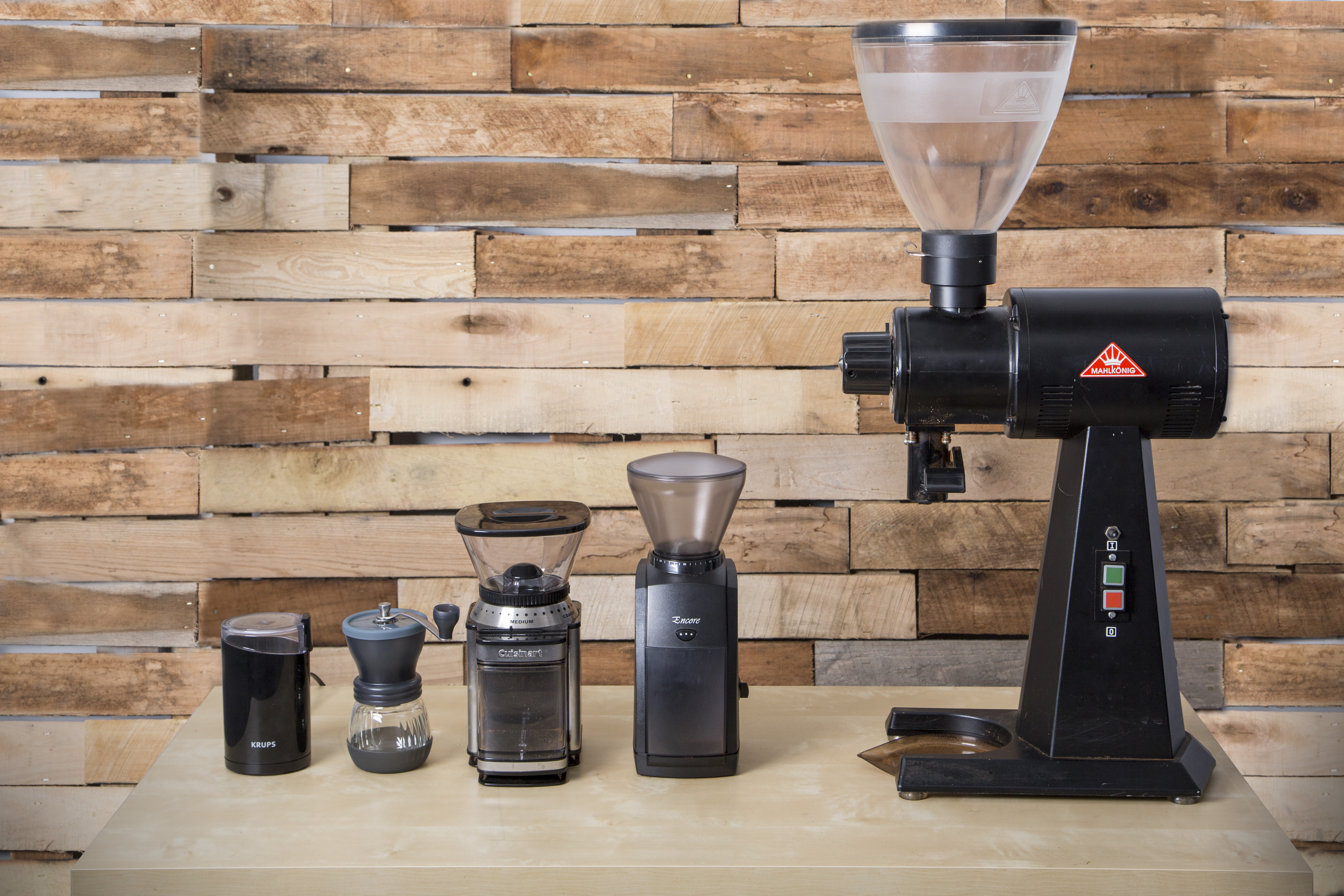 If you like to use multiple brewing devices, or do not brew the same amount of coffee every day, having a grinder at home will offer you a lot more flexibility, as you’re able to adjust grind size on the fly to accommodate multiple devices. Even for a professional barista, there will be some guesswork in choosing perfect grind size the first time. If your pre-ground coffee doesn’t quite accommodate your normal brewing parameters you can manipulate some variables to hone in on the perfect extraction. For full immersion brewing, all you’ll need to do is adjust brew time. For percolation brewing, you will either need to increase/decrease water temperature to change extraction or, if that’s still not enough, relatively increase/decrease your dry coffee and water doses to effectively manipulate the contact time your water has with the grounds. Pre-ground coffee brewed with a percolation method will often require a compromise in total brew volume.

As much as I love a good Instagram opportunity, I won’t be bringing a fancy hand-grinder on my next camping trip. Instead, I’ll be pre-grinding for the weekend. For me, the most important thing to take away from this experiment is that grinders are, by far, the most important and impactful part of any brewing setup, and freshness isn’t king. Grinding right before brewing isn’t crucial. There are circumstances in which pre-grinding coffee is ok -- even better.