The relatively new Fellow Ode (standard with 64mm flat steel burrs) and tried and true Baratza Vario (upgraded to 54mm flat steel burrs) share a purpose—grinding for filter—yet differ in the particulars, including features and (though only slightly) grind quality. In this video, Steve compares the two in order to help you make an informed decision about which grinder deserves that empty space on your kitchen counter. 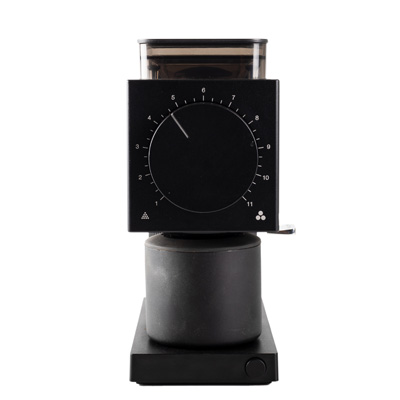 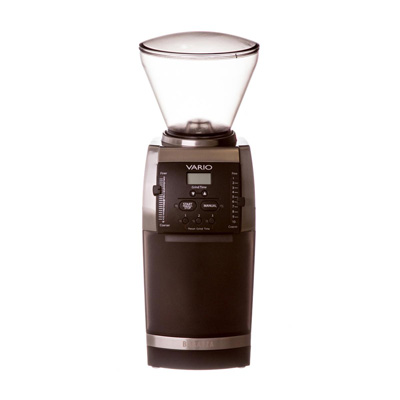 Hey, I'm Steve with Prima Coffee and today we're going to do a comparison between the Ode and the Vario. These grinders do look totally different. This is the signature Baratza design on the Vario and the signature sort of clean and minimal design of the Fellow product. So you might be wondering what is this comparison actually going to be about, and it comes down to the burrs. So the Fellow Ode uses 64-millimeter flat stainless steel burrs and the Vario uses 54-millimeter flat stainless steel burrs. Now, you might be saying this one actually comes with ceramic burrs, which is true. But for this comparison, and we have had some people ask us to do this comparison of these as brew grinders.

When we're talking about the Vario as a brew grinder, you can upgrade to stainless steel flat burrs and that's kind of what we've done here. So the price is pretty different on these. You're going to pay about $524 for the Vario, and $299 for the Ode. So the difference, or the reason for that difference, I guess, is that the Vario over here has just more features and more options than does the Ode. The big one over here is going to be your grind by time. So you can program your grind by time down to the 10th of a second on the Vario here, and it has three programming buttons. So all you need to do to program that is to hold the button down. And then you can use the up and down arrow to choose the seconds that you want, hold the button down again and that'll program that button for the time that you want. And that paired with this really large hopper, so this is a 230-gram hopper, it makes this a multi-dose grinder. So basically, you can dump your bag of coffee here into the hopper. And then if you know it takes 12 seconds to grind your 20 grams of coffee for your pour over, then you come into the morning and just choose your button and hit start and it'll dose that out.

On the other side here we have the Ode which you can just see by the clean profile that it doesn't even have much of a hopper at all. This is a single dose grinder. You're going to weigh your coffee, and you're going to dump it in here to be ground. You're not going to leave it in the hopper as you're going to do over here on the Vario. So the Ode doesn't have that kind of feature that the Vario has, it doesn't have a grind by time, doesn't have grind by weight. Really, all you're going to do is turn the grinder on, and it's going to run and then you're going to turn it off when you're done. If you don't turn it off, it'll take about four seconds or so give or take to turn itself off. So that is a nice feature, it's a smart PID motor, you can just sort of not worry about hitting the button to turn it off. It'll just turn off on its own once the motor realizes that there is no more resistance in the burrs. Another feature that it has is this grinds catch here is magnetic so it'll place directly under the chute. So you don't have to worry about that. You just put it in, and it'll slide into place.

So another thing you're paying for with the Vario is the grind range. You have 230 grind adjustments that you can make here for the grind size. And on the Ode you only have 31. The Vario is probably built that way because it has these three programmable buttons. And like I said before, it comes with ceramic burrs, which are made for espresso. So all of those adjustments really make a lot of sense when you're talking about espresso. When you're talking about brew coffee, it doesn't matter as much, except you still can really dial in your brewed coffee as well more so here than you can over here. Another thing about these burrs is that you can go a little finer than you can over here in the Ode and then it's just a little finer, but you're probably not going to have trouble getting whatever you're doing for aeropress on the Vario and like I said, you might not be able to go as fine as you want to go here with the Ode.

So a lot of people are probably wondering and waiting for me to get to the grind quality, which is the big question between these two burr sets here. How do they compare? Well, like I said, the Vario can go a little finer, and they both can go, you know, about the same coarseness, but you can calibrate this one depending on what your needs are. And the grind quality to the naked eye is pretty similar. And in our Kruve test, we found that there is a little difference. The Ode here has a tighter grind distribution. And that basically means if you want to grind for your V60, you're going to get more V60-sized grinds with the Ode than you're going to get with the Vario. The difference is really slight, but the Vario does produce more on the coarser and more on the finer, so it is not as tight. You're going to get more of that here. So theoretically, what that's going to mean is you're probably going to get more even extraction with the Ode than you are in the Vario. And again, that's very minimal. So even extraction is small, the tastes of the cups we made on both of these was very similar. And when we did a taste test, it was kind of difficult to tell the difference between the two.

So we also tested the decibels on these and it came out to be pretty similar. Let's check the Vario here when it has coffee in it. It's about mid-80s. And the Ode over here, when it has coffee in it, it's getting into the mid-80s, as well. We can sort of run it through so you can see what it's like. That's 63. That's 73 over here on the Ode. So not much of a difference. And you could see that popcorning there. So we put some coffee in here, try to run it through. There's an example, this bean just popped out. So you'll get that here with the Vario, whereas you're not going to see that with the Ode. So as far as time goes, we find that the Ode is a little bit faster than the Vario with grinding. It takes about 12 seconds on a medium setting to grind 20 grams on the Vario, and we're talking about 7 seconds or so maybe a little bit longer here with that same size for the Ode. I'll go ahead and show you what that looks like. So 20 grams here for the Vario. And I think I said earlier that they have these three programming buttons, which is true, that is one of the features here it's this grind by time.

But you can also do a manual grind if you just hit the manual button, and then you can hit start to get it going. And we'll go ahead and time it. So it actually finished in around 13 seconds. But then it was working that last bean. So that is one of the things here, it takes an extra couple of seconds to finish. We'll do the same thing over here with the Ode, 20 grams. Yeah, it's about seven seconds there. And there was a little popcorning which you couldn't see. But also it didn't come out because what we have here is this shield to keep any coffee from coming out of that grind chamber. So about 8 seconds over here, about 13 seconds over here for those 20 grams, same coffee on a medium setting. So as far as retention goes, we ground 20 grams here on the Ode, 20 grams on the Vario. I'm going to kind of show you what came out of that.

So one thing about the Ode is it does have these sort of wings here on the grinds catch that make it kind of difficult to get all the grinds out. But it does also help you to pour straight into something. So out of that, we got 19.5. Okay, so one feature here of the Ode is that it has this knocker here to clear the chute. Much like the EK from which this was sort of like designed, or that was the inspiration for this. So that 0.5 grams is usually going to be found right there. So if you clear the chute when this is still under there, you can get most of that retention into your cup. So that's kind of what happens on the Ode. We ground 20 grams here on the Vario as well. And we'll kind of show you what came out of that. So it's a lot less messy to pour from the grinds catch on the Vario. And we have 20 grams right there.

So you can see that there's just kind of basically no retention over here on the Vario and there's just a little retention here on the Ode, but you can clear it out here with the knocker and get most of it. So that is a comparison between the Ode and the Vario. I hope that does make you to make an informed decision or at least maybe answer some of your questions about the differences between both of these flat burr grinders for brewing. They're just more features over here more on the grind adjustments as that grind by time, 230 grind adjustments, there's a smart PID motor so it'll turn off when the grinding is through over here on the Ode, 31 grind adjustments. The cup quality is really good on both of these. You can find them online at prima-coffee.com. Thanks for watching.