I'm Ryan from Prima, and this is the Mahlkonig E80s Grind by Weight commercial espresso grinder. The long awaited E80s GBW brings together two of Mahlkonig's best espresso grinders, the E65s GBW and the E80 Supreme. This grinder not only grinds a shot of espresso in under three seconds, but it's also capable of dosing by weight with an accuracy of about 1/10th of a gram which is an absolute game changer for busy cafes. With grind by weight technology, the user no longer needs to dial in grind time to achieve the target dose each time grind size is adjusted. Instead grind by weight technology utilizes a load cell in the portafilter holder and an advanced algorithm to grind precisely the right amount of coffee no matter what the grind setting. 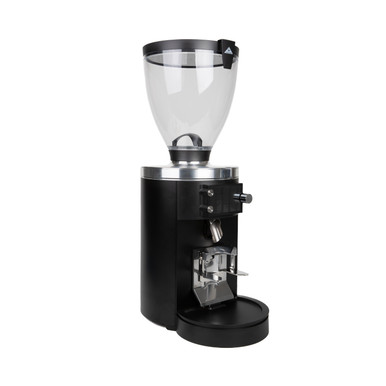 So let's take a look at the E80s GBW from top to bottom. On this lid, we have a clip to display the current coffee if you'd like to. This hopper holds three and a half to four pounds of coffee beans which is quite a lot for an espresso grinder. Below that is a step less adjustment with a full range for anything you'd ever need for espresso. This is an 88 millimeter screen which is hard to get a sense of on video but it is huge and very clear and very bright. It has three very simple controls. You can toggle between recipes with this knob. To change the dose weight in increments of a 10th of a gram, simply hit the pencil button, move the dial and then select the check mark. It's extremely fast if you wanna make changes on the fly. And then here we have a pulse button. If you wanna just add tiny amounts of grounds to your portafilter. Below that is the chute which is removable like that for easy cleaning. It can also be adjusted by angle. And then this is the portafilter fork which can be adjusted up and down to accommodate any portafilter size. And then that is attached to a load cell which you can see here underneath the load cell cover. And that is what's actually weighing the portafilter and then also the grounds as they're dispensing.

The E80s GBW integrates the same interesting features included with the smaller E65s GBW including disc distance detection, which tracks grind size and allows grind settings to be saved to a grind profile and also directs the user back to that grind size if the adjustment is ever moved. This feature also allows multiple grinders in multiple locations to align on the same recipe more quickly. The next feature adopted from the E65s GBW is a portafilter detection mode which recognizes the weight of any assigned portafilter and automatically grinds the programmed dose weight once it recognizes it. So if you have a particular recipe where you dose up by a gram or two, simply designate a portafilter for that recipe and let the E80 do the rest. Inside of the E80s GBW, there is an 80 millimeter tool steel burr set that's cut in the same geometry as the former Mahlkonig Peak burr set and also the current Ditting 807 lab suite burr set. This burr set produces a remarkable grind profile that is distinctly sweeter than standard burr. If you'd like to upgrade the tool steel set to an actual cast steel Ditting lab suite set, we can help facilitate that upon ordering for an extra fee. The cast burr set has a lifespan of about twice that of the tool steel about 4,000 to 6,000 kilos before needing replacement. The E80 is a true high volume espresso grinder able to be used continually in most busy environments without overheating, up to six shot cycles per minute. It accomplishes this with two internal fans which are efficiently flushing all of that hot air out of the body and preventing any of the issues that were present in the previous models like the Mahlkonig Peak. When purchasing a GBW, you want to make sure to also find a one kilogram weight to have on hand for a periodic calibration. Calibration should be done immediately following shipping and once every month or two to ensure optimal accuracy. For our GBW maintenance video, click that link above. That's the Mahlkonig E80s GBW. Check it out at primacoffee.com. Thanks for watching!