The verb “tamp” dates to the early 19th century when it was used exclusively in mining for referring to bore-holes, e.g., the act of packing earth into cavities filled with explosives. Later in the same century the word was being used in the non-destructive sense. Any old depression, it seems, could be filled with dirt or clay, as could a pipe with tobacco. Whatever implement, however crude, used for packing a substance, though, was called then as now a tamper.

Thus espresso tampers exist in a long line of tools made for packing brown particles into recesses. They aren’t so special and precision tampers (which we will get to later), though advantageous, aren’t required. We could tamp with any flat surface, the bottom of a cup even, as long as we can fit it into the filtration basket, and even with the convex tamper that comes with La Marzocco machines. They might not be ideal, but they will work; they will tamp. There are, however, obvious reasons not to use a convex tamper, the first being the puck will have an indentation in the center where water will likely go first, causing uneven extraction. There are reasons to avoid plastic tampers, too, and tampers that don’t cover the entire diameter of the coffee puck. The former requires too much from the wrist while the latter creates a fertile environment for perimeter channeling, which is a fancy way to say the outside of the puck will extract more than the rest. The coffee will taste fine, and you can still call it espresso, but it probably will not taste great.

Who Needs A Tamper?

The case for a good tamper, like the case for precision tampers, is not a case for tamping, per se, which can be done with just about anything, as described above, but rather a case for quality in tamping, which translates directly to quality in espresso. Why make a drink that tastes substandard, or that tastes good only periodically and with no traceable reason? Why spend so much money on a machine and then cut costs on the tool that is equally as important? The tampers in our catalogue are not cheap, but hey, neither are their results. Used correctly, i.e., with proper form, they will deliver tasty results every time.

We carry three kinds: traditional tamper, palm tamper, and automatic tamper. The traditional tamper is what most of us think of when we think of a tamper. It has a flat base to compress the coffee and a handle to hold while doing it. The palm tamper is a more recent innovation that grew out of conversations about wrist injuries associated with repeated tamping and, more the problem, incorrect tamping form. Think of a traditional tamper without the handle. It is meant to be placed on the portafilter and pressed down onto the coffee with, as the name goes, the palm. The automatic tamper is just what it sounds like: a tamper that needs no arm, hand, or wrist; just a portafilter with coffee.

Regardless of kind, all tampers have one objective: evenly compress the coffee in the filtration basket. Without a tamper, espresso is impossible. In order to make espresso, the coffee particles must be tightly packed together in the basket to create sufficient resistance without which the water, being aided by 9-or-so bars of pressure, will shoot right through the coffee in unimpeded channels, extracting particles along the pathway and not others. You will never be able to grind fine enough for an untamped filtration basket. It is simply not possible. 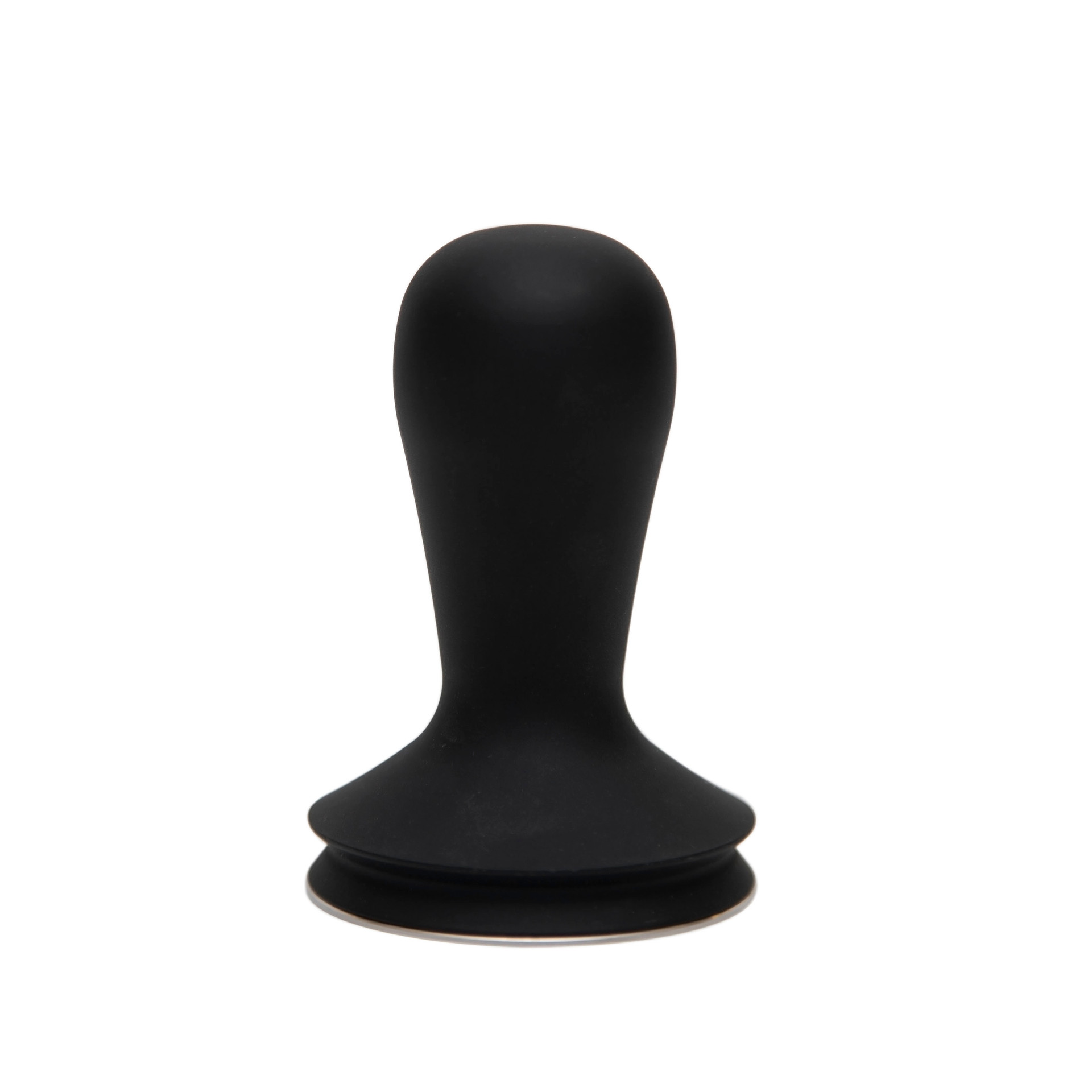 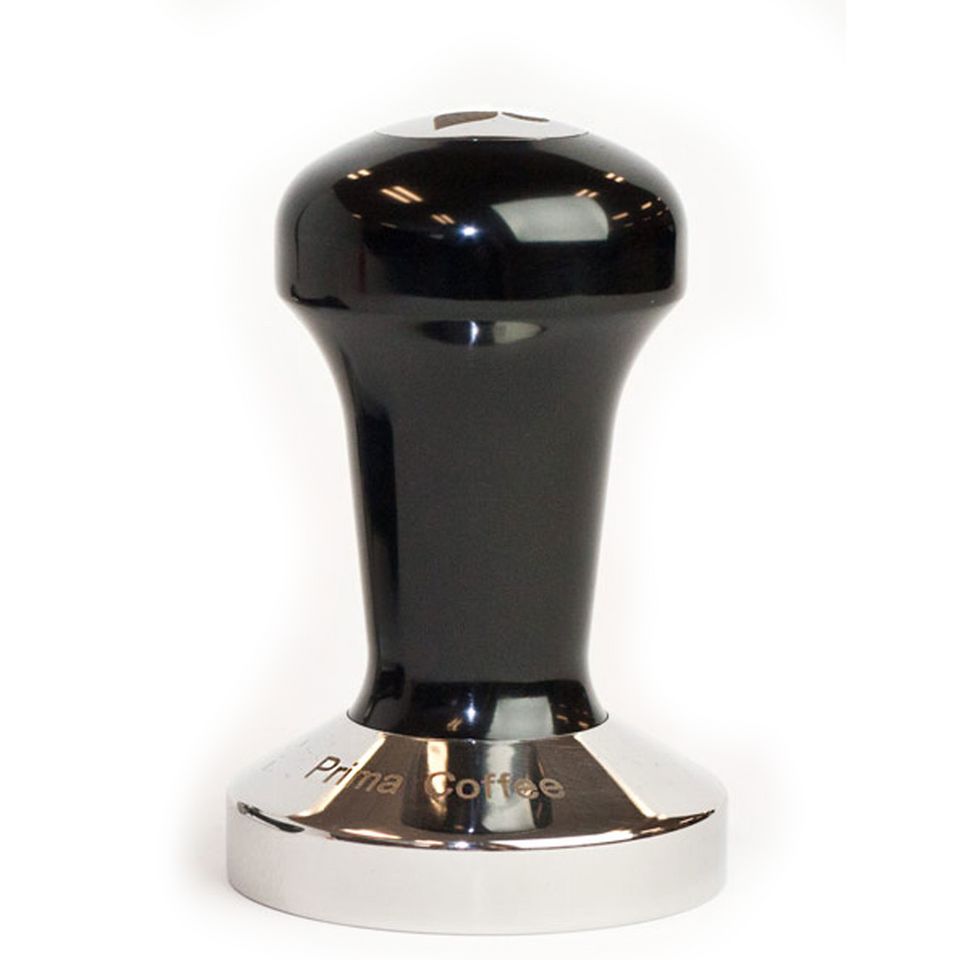 Most baristas, including all of us here at Prima, start with a traditional tamper. These have a contoured handle for gripping and guiding and a piston for compressing the coffee in the basket. Plus they are ubiquitous. Traditional tampers can be divided into two categories: precision and regular. Precision tampers are exactly what the name implies: precise. The precision in question refers to the diameter of the piston, i.e., the flat surface that presses down the coffee. Most espresso filtration baskets are 58mm, which really means 58.5ish, so a regular 58mm tamper, while being totally sufficient, will not reach every last micrometer of the coffee bed; a precision tamper, on the other hand, is a fraction larger than 58mm, so it does reach all the way to the edge. The benefit is slight for most of us but important for competitions or specialty cafes where the margin for error is tiny.

The Prima Coffee Espresso Tamper is the only regular tamper in the catalogue. It is great for beginners and also for machines with irregular size groupheads, because it, unlike the other tampers, is available in many sizes, including 49mm, 51mm, 53mm, 54mm, 56mm, 57mm, and 58mm. It is also available with a precision 58.35mm piston, too, so even though we have lumped it into the regular category, it is both, or rather it is available as either.

As precision tampers, the Barista Hustle (58.4mm) and Pullman BigStep (58.55mm) tampers reach to the absolute edge of most precision baskets, such as those from VST and Pullman. In addition, they are shaped in a unique way to minimize the vacuum effect. The BigStep has a little step, a thin protrusion at the base, and the Barista Hustle has a duck-bill base; both of these design features prevent suction when the tamper is removed. Suction is bad news because it more often than not disrupts the perfectly compacted puck, necessitating another try.

Both have features the other does not have and may influence your decision. The BH, for example, has a replaceable base. If it is damaged or worn on the edges, both of which may happen to tampers in busy shops, no problem. A new base can be acquired for a fraction of the price of a new tamper. The BigStep comes with three handle spacers: 1mm, 5mm, and 8mm, so it, more than the other tampers perhaps, will fit in every hand, from the smallest (no spacers) to the largest (all spacers). They can be used independently or together. 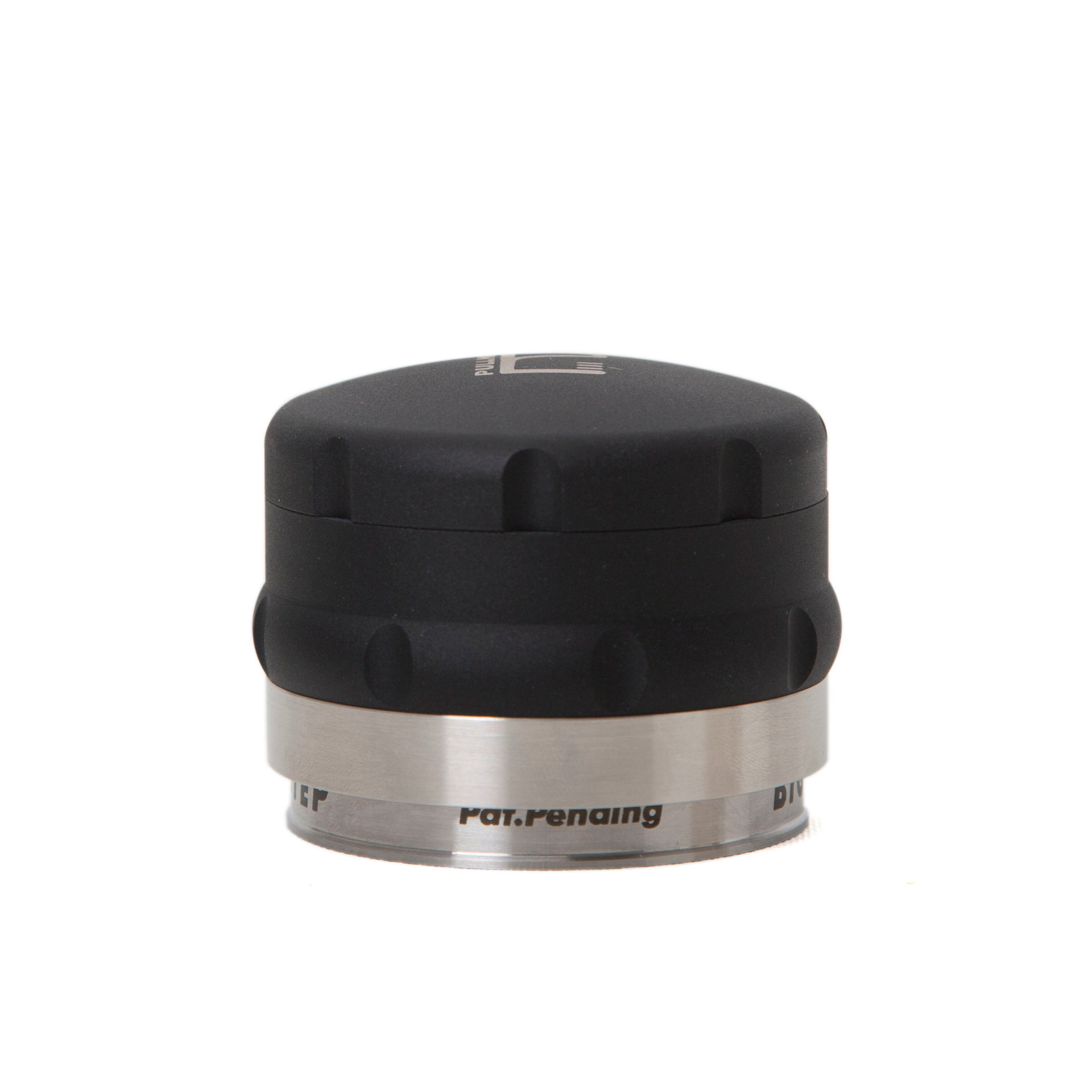 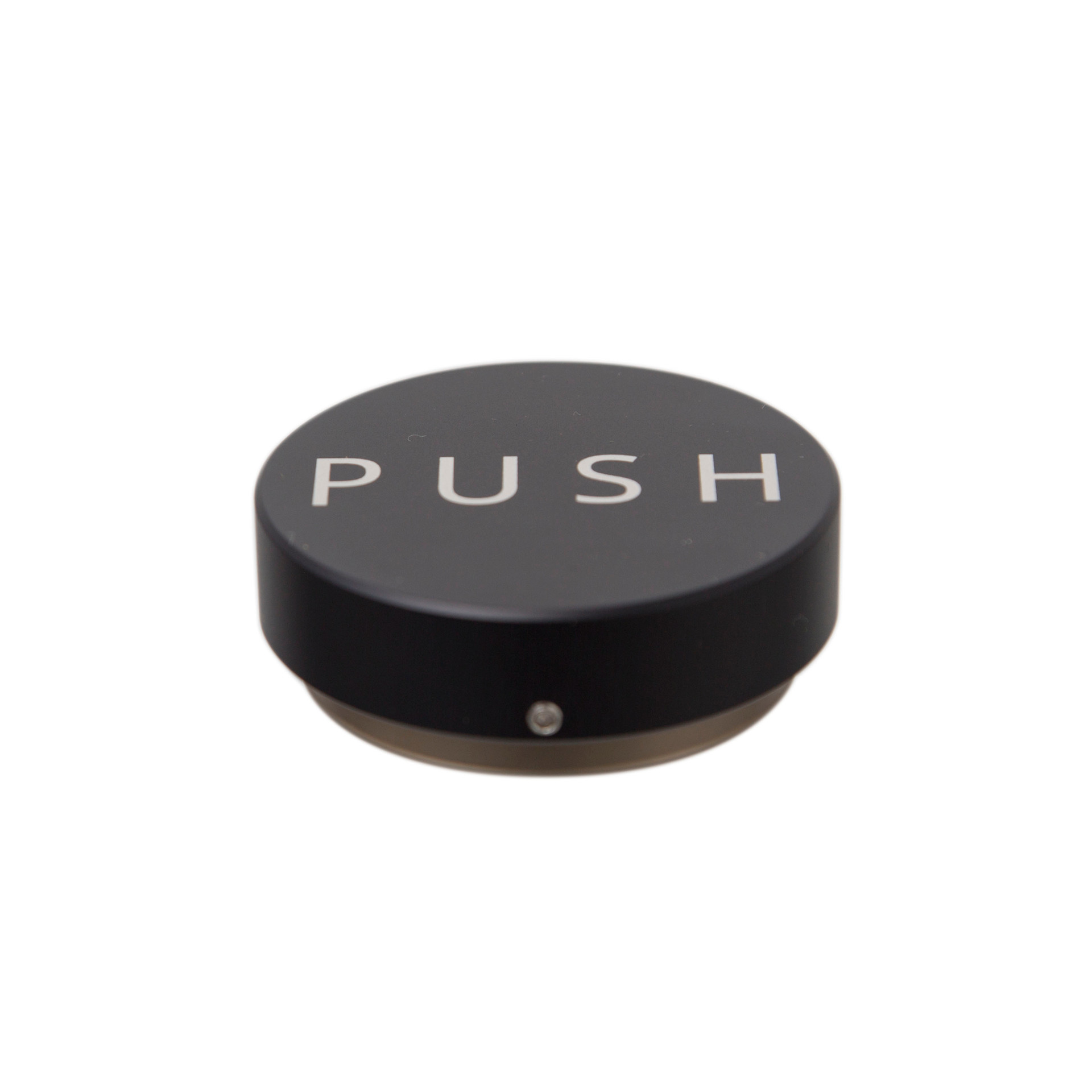 Palm tampers are different, not necessarily better than traditional tampers, except in one specific way: it is difficult, while not impossible, to tamp unevenly with them. They have a piston with an adjustable depth and a lip above the piston, which fits on the rim of the portafilter and therefore prevents uneven tamps. The tamp will necessarily be level with the top of the filter basket.

Pullman has a palm tamper that uses the same BigStep Base as found on the company’s mainstay. The difference is that the palm tamper has a base on threads; the depth can be adjusted to fit the dose in the filter basket. No tools are required; the rounded top, which is made to fit comfortably in your hand, is on threads, too, and serves to lock in whatever depth has been chosen for the piston. Like the original, the Pullman BigStep palm tamper has a precision (58.55mm) piston. In fact, it is the same piston as the stemmed version but with a different hat.

The PUSH adjustable depth tamper is similar to the Pullman palm tamper but with three differences: 1. The top is flat, not rounded; 2. A hex tool, which comes with the tamper, is required to adjust the depth of the piston; and 3. The piston has lines on the side to make finding and recreating depths easy. This last feature is a major win for the PUSH. 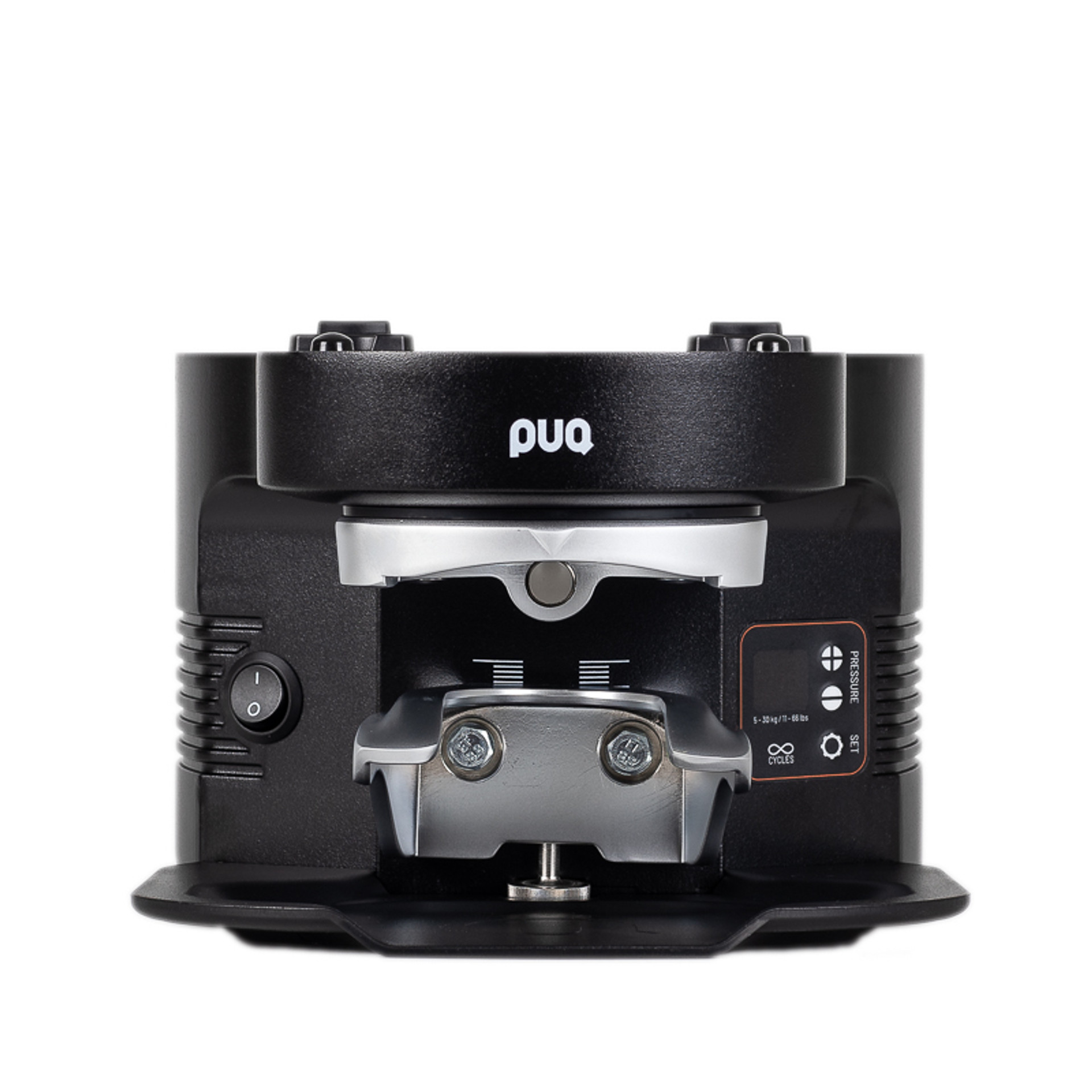 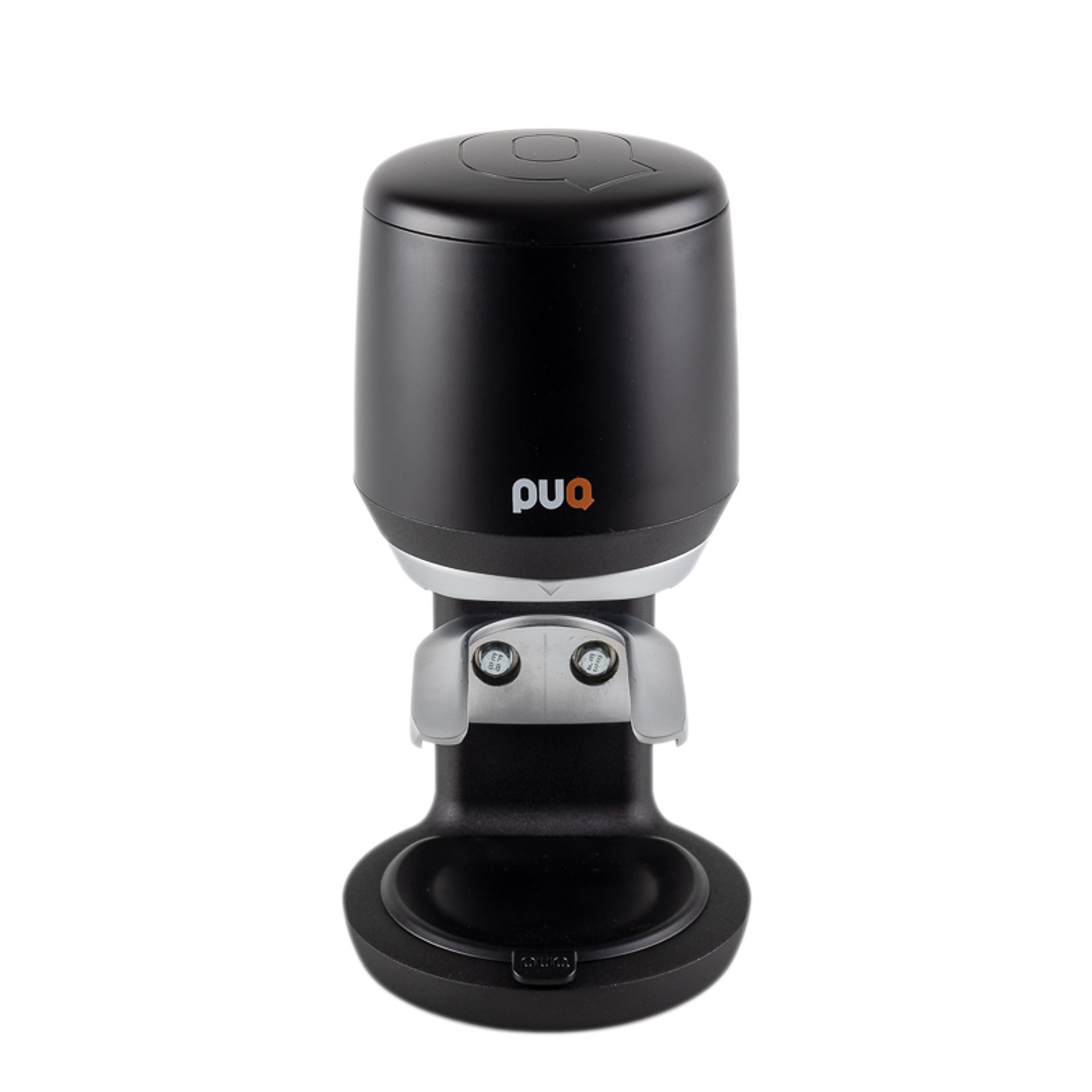 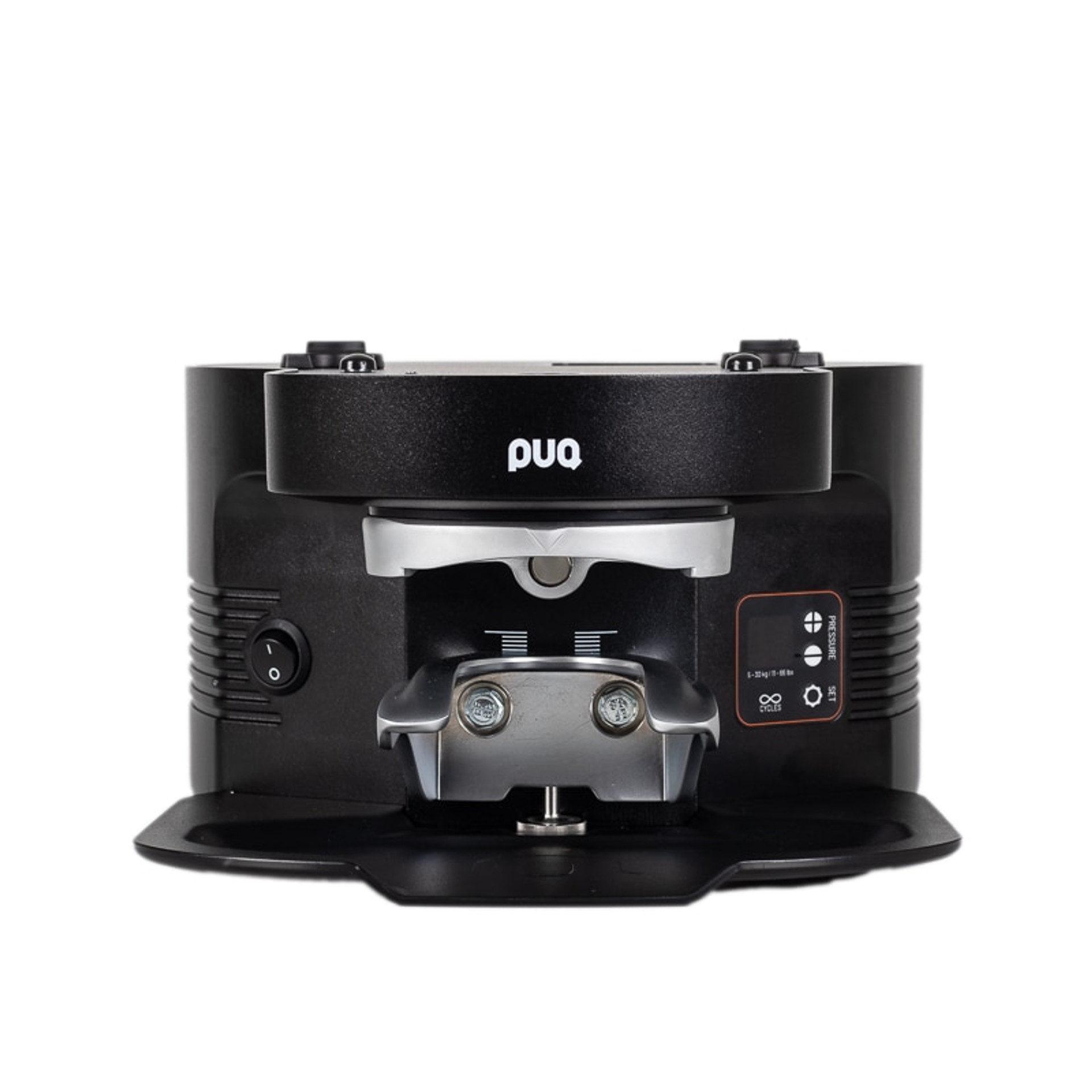 Automatic tampers sell themselves. The drawback is of course price. They aren’t cheap. The advantages, though, are numerous. The first one is consistency. No matter the setting—there are plenty of options for pressure and tamp style—the motor will deliver the same tamp each time. Even the best baristas get tired or have off days. Not the case with the Puqpress.

The Puqpress comes in standalone or under-grinder models. The standalone models include one for the Mini for the home barista and the Generation 5 Q2 for the café. The former is made for low-volume work (up to 2kg per week) and the latter is outfitted with a more powerful motor for high-volume work (well above 2kg). The Mini has a 58mm piston, which is sufficient, but the Q2 has a precision 58.3mm tamper, which is right at home in specialty cafés. As for options, the Mini offers modes between 20 to 60 pounds and three styles: soft, speedy, and precise. The Q2 has the same pressure options—20–60 pounds—but more tamping style options: speedy, precision, hulk, soft, and single.

The other models in the Puqpress line are under-grinder tampers. These were first released for the Mahlkönig K30 and Peak and Mythos bodies. Now the company has released some new models to fit new grinders on the market. They are made to fit snugly under the Mahlkönig E65S and E80S. The tamper weight (i.e., the amount of pressure applied to the puck) can be adjusted from 11 to 66 pounds; and five tamping style options (speedy, precision, hulk, soft, and single), same as on the standalone Generation 5 Q2,are available, too. The general idea is that you can recreate the kind of tamping that you, as the barista, preferred. But the good news is you don't have to do the work. The under-grinder models are rated for high-volume cafes just like the grinders under which they fit and the pistons are precision 58.3mm.

The Choice is Yours!

All of the above tampers will do the job. In fact, they will do a great job. The decision comes down to purpose. If you own a high-volume café, the Puqpress offers a great boon to efficiency and the cost is entirely justified by productivity. Within just a few months, possibly a year, the extra espresso drinks you were able to make with it will cover the cost of the machine. If, on the other hand, you are a home barista, the traditional tamper is totally sufficient and will allow you to feel completely involved in the espresso-making process. If you have concerns for wrist injuries, or want less stress on your arm and hands, the palm tamper is probably the right choice. You cannot go wrong with any of the tampers in our catalogue. Let us know in the comments which tamper or tampers you prefer and why.