It's quite the claim, but we say "yes!" In this review, we investigate Baratza's promise and see if an espresso grinder can actually be bought for this astounding price.

The Baratza Encore: A Barista’s Review of an Affordable Espresso Grinder

The review is below, but first…

A Tale of Scandal and Misfortune from Yesteryear

Years ago, I was sold a lie by a sweet-talking grinder salesman and I spent hard-earned money on a grinder that could "totally grind for espresso". At home, I found that this grinder did grind espresso if you wanted espresso to be thin, pale and for shots to run in 15 seconds. I modified the grinder, and that improved the grind from “not-at-all-like-espresso” to “close-enough-to-look-like-it-might-work-for-espresso-but-it-won’t.” I listed that grinder on eBay and got back half the money I spent. But I never got back my trust in “The System.”

So, take it from someone who has been burned before: there are grinders out there claiming to reach an espresso grind, but only a couple of them under $300 actually get the job done. Even harder to find is an inexpensive espresso grinder that is also optimized to work for brewing grinds. Details of my testing are below, but from my skeptical heart to yours, here is the bottom line: The Baratza Encore is a $129 grinder that will grind fine enough for espresso and still maintain a consistent grind for a French Press. 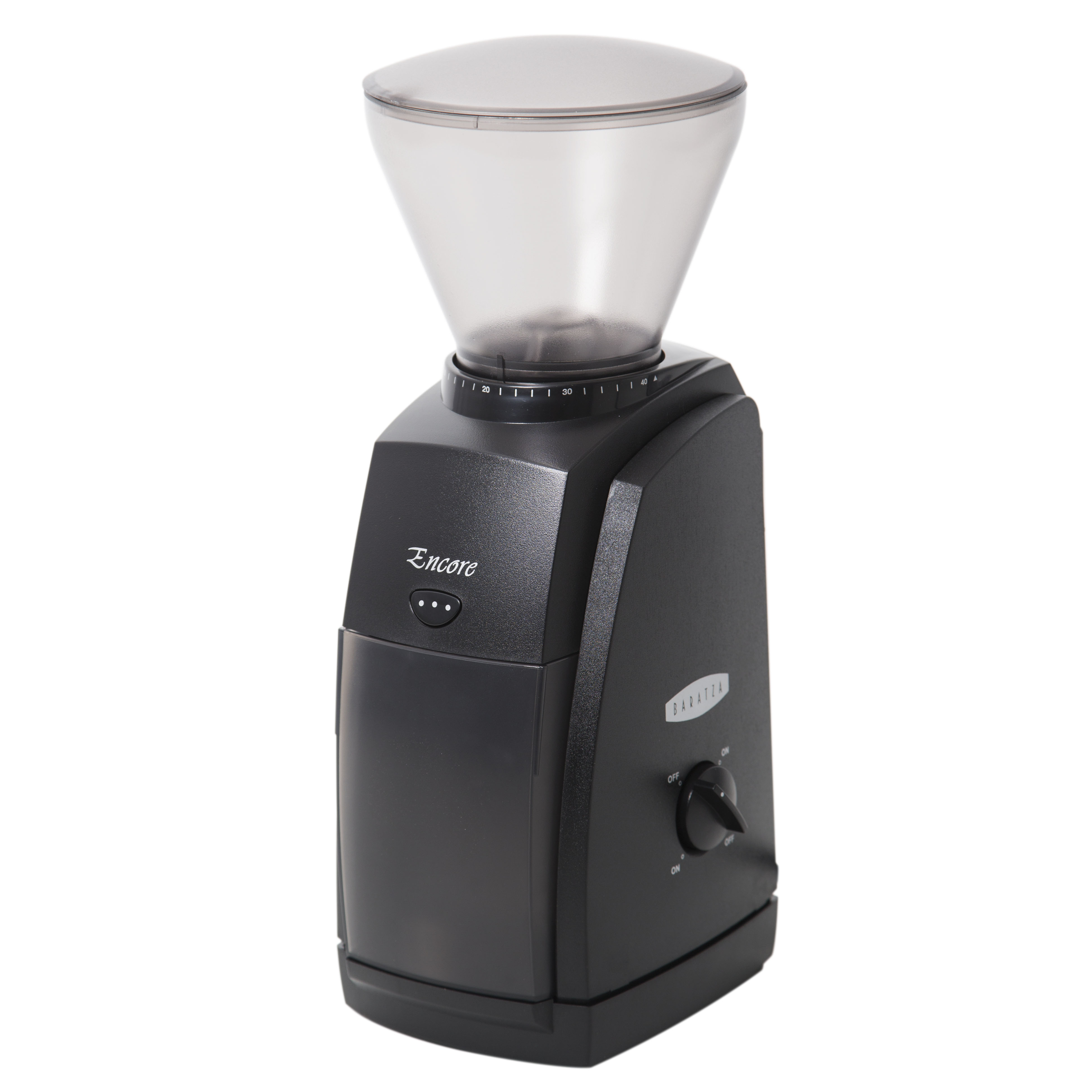 Baratza Encore Put Through the Paces

Before giving the Encore my stamp of approval, I put my test model through a week’s worth of brewing challenges. At my house, that means four brews every weekday morning (I brew a lot of coffee) and two shots of espresso everyday (one straight-up, one in a cappuccino.) Including the brews I did specifically for testing, in a week’s time I did 30 manual brews using the Encore and pulled 40+ shots. That may not be enough to constitute an FDA clinical trial, but it is plenty to give me a strong impression of this grinder’s capabilities. The results are discussed below.

The Encore performed well across V-60, Chemex and Café Solo brew methods. Something to note is that the Encore’s wider grind range compared to its predecessor, the Maestro Plus, means that each step (there are 40 steps on each grinder) also has a wider range. This could definitely be considered a drawback. If you were only intending to use this grinder for brewing, not espresso, the wider range is a negative because the usable range (for you) is now allocated to relatively few steps, meaning there is less granularity in grind adjustment.

I matched up the Encore against two other Baratza Models: the now-retired Maestro Plus as well as the Virtuoso Preciso. I do feel like out of the three grinders, the Encore performed third best in brewing trials, but the margins between the three were very close. I attribute the main disadvantage of the Encore to the lack of granularity—I was able to dial in the other grinders more effectively. However, the final products of most brews were so similar between grinders that the difference was hardly notable, especially at coarser grinds used for the Chemex and Café Solo.

Espresso Tests: Can the Encore grind fine enough for espresso?

The Maestro Plus and Encore have effectively the same manual brewing capabilities, but in the espresso trials, the Maestro Plus isn’t even a competitor. Turned all the way to the finest notch, the Maestro is not capable of pulling an espresso shot. In comparison, the Encore is capable of choking espresso machines at “6” if you use a firm tamp.

For the espresso trials, I tested the Encore against the Virtuoso Preciso as well as my beastly Mazzer Super Jolly, a commercial grinder which has an updated titanium burr set. Like the brewing trials, the Encore was my third favorite of the three. The grind coming out of the Encore was clumpier than I would like, and it had a negative impact on shot quality. But with the price difference (Encore=$129, Preciso=$300, Super Jolly=$675) it is hardly fair to expect the Encore to perform evenly, and it is a high compliment to Baratza to say that they make the Encore well enough that it can “hang in there” against more expensive machines. I also want to add this: I own the Preciso and the Super Jolly because they are good grinders, but the Encore does perform better than a number of grinders I’ve used in home and shop settings.

The full results of espresso testing would be far too long to reprint, but I am including the tasting notes from one set of test shots. This test represented the Encore’s performance accurately. All shots were pulled to the same specs: 5 seconds pre-infusion, 23 second total extraction time, 199 deg F, using a dry-processed Ethiopian espresso with a 19 gram dose. All shots in this trial were great. I gave the edge to the Preciso and then to the Mazzer because of increased complexity and the presence of sweet fruits. The Encore was just slightly bitter in the aftertaste. On the other hand, the Encore had a great medium-brightness and showcased the shots high-noted fruits really well.

On the Encore, the settings 7,8, and 9 worked best for espresso depending on the beans used. This Ethiopian espresso was tastiest on an 8, but shots were slightly fast even with a high dose. The shot was delicious. It was bright and sweet. On the front-end I got grapefruit and Thompson green grapes. The aftertaste was 85% cacao dark chocolate—initially bitter but buttery too. The second and third sips of the shot had more of the grape and less of the grapefruit.

The shot ran slower than the one from the Encore. I cut it at 23 seconds, so it yielded about 1 gram less volume. Initially, the shot was brighter and a little more distinct than the Encore’s. I got ruby grapefruit and more of a grape skin instead of grape. The finish on the first sip was a mild baker’s chocolate. The later sips of the shot had a lot of complexity and depth. Sweet, tart apple with a ripe banana finish. Slight cinnamon spiciness.

The shot pulled an identical volume to the Encore shot with similar coloration and viscosity. The burrs on the Mazzer are flat, whereas the two Baratza grinders have conical burrs. The flat burrs yield a shot that is less acidic and juicier than the other two. The initial flavor was more like purple sweet grapes instead of green grapes. The back-end of the shot was like a Texas sheet cake: sweet and chocolate-y with a little spice.

The Baratza Encore adds espresso functionality to the already-impressive Maestro series. It grinds fine or coarse enough for any purpose. The coolest thing about the Encore is this:

Espresso at home for a reasonable price—not long ago, that was just a dream. If you’re considering an Encore grinder purchase I want this to be my final word: I can guarantee that the user support from Baratza will be exceptional; they have an old-school approach to customer service that is personal and genuine. Buying an Encore is not a gamble because Baratza takes care of their customers.

About the author: Chris works as an energy analyst by trade, but his passion and hobbies revolve around the world of coffee and espresso. Formerly he has served as Coffee Quality Manager at Quills Coffee and a barista at Sunergos Coffee here in Louisville, Kentucky. At home, Chris is an avid home roaster, and manual brewing and espresso aficionado. He was the winner of the latte art competition at Louisville's first Barista Bash and the winner of the brewing competition at the Barista Bash IV. He is married to Allie and they live with their lovable dog Odie.