Alt milks are all the rage. Or rather they were all the rage and now they are just a rage, the status quo. In a good way. What first started as a way to accommodate dairy enthusiasts with a lactose allergy, and mainly just with a sugary soy bean beverage that has since fallen out of favor, has escalated into an industry, albeit a small one. Even so, the dairy industry, which is so big that it is usually measured in percentage of GDP, is upset, apoplectic even, resorting to the courts in what has been a decade-long and so-far unsuccessful strategy to force the plant-based milk makers to drop the word “milk” from their labels.

Plant-based milks are far from second-class, especially when it comes to being a coffee companion, and they are not going away, regardless of the nomenclature. Oatly, for example, recently raised $200 million in venture capital, which included a contribution from Howard Schultz, and, in March 2021, was rolled out in Starbucks stores, ushering in the next era in alt milk glory. Moreover, recent research shows that even though more people are eschewing dairy, they still want their protein and they still want their lattes.

With this in mind, we set out to find the best alternative milk for baristas. After some research, we narrowed the field to three oat (Minor Figures, Oatly, and Rise) and three almond (Califia, Elmhurst, and Pacific) milks. Naturally, we chose the barista edition of each (except for Rise, which has only one version).

These tests were conducted in the false winter of a Kentucky February, when the freezing temperatures of morning gave way to beach-worthy afternoons. We thought it prudent, then, to test these milks in both a warm, cozy, classic drink—the cappuccino—and a chilled, refreshing, modern drink—the iced latte. 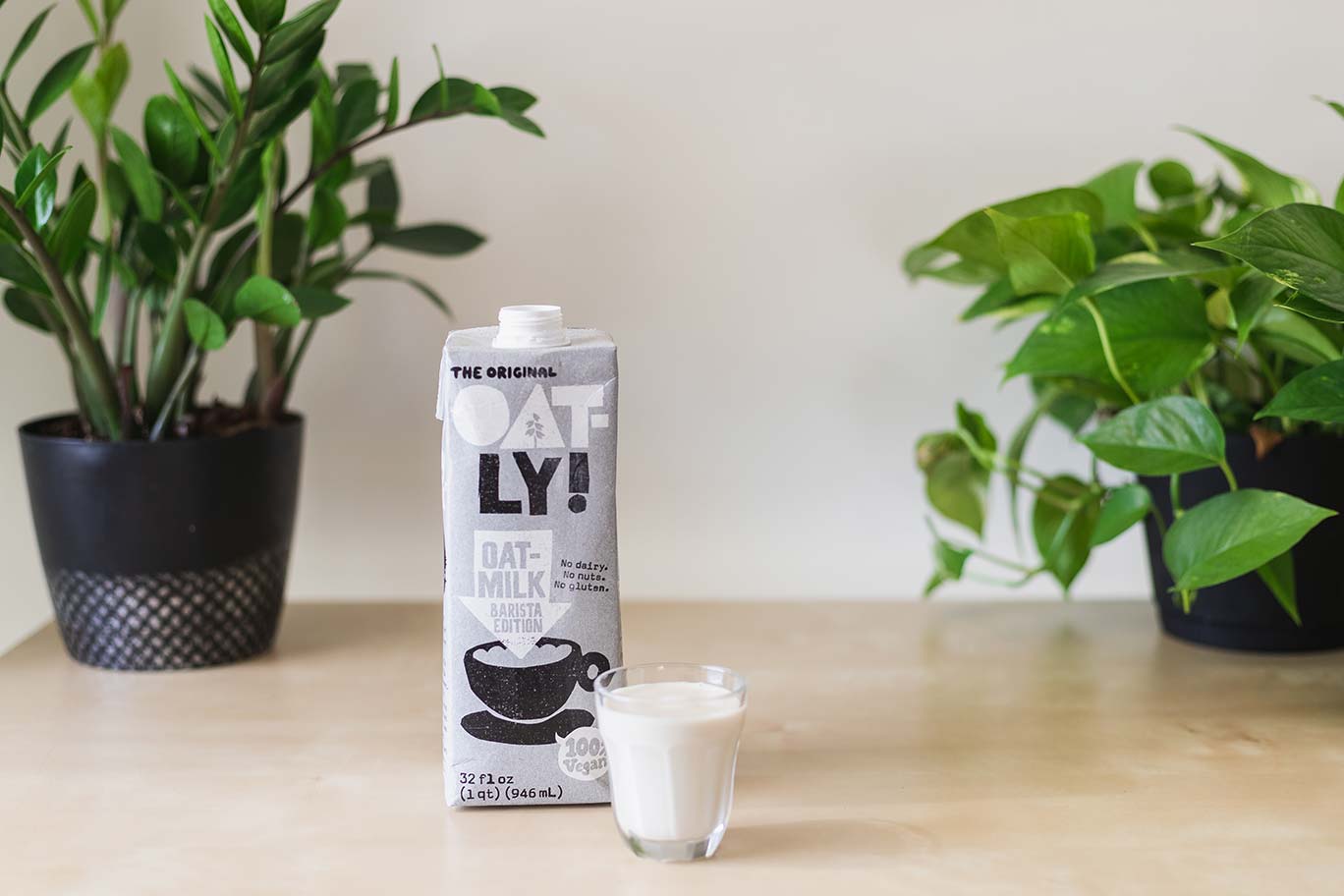 We began by tasting a sample (~4oz.) of each oat milk individually—no coffee, no steaming, just sipping. Each milk had a vastly different flavor; however, Oatly was the winner of this round. It boasted a smooth and creamy texture, perhaps more so than whole milk even, and left a subtle flavor of oatmeal lingering on the tongue. Minor Figures, with a much sweeter flavor, despite no added sugars, lacked the creaminess and authentic oat flavor found in Oatly. However, it did provide an enjoyable sipping experience nonetheless. Rise, on the other hand, presented us with an unpleasant sweetness, followed by a lingering saltiness and confusing, unknowable flavors that made for an overall unpleasant experience. 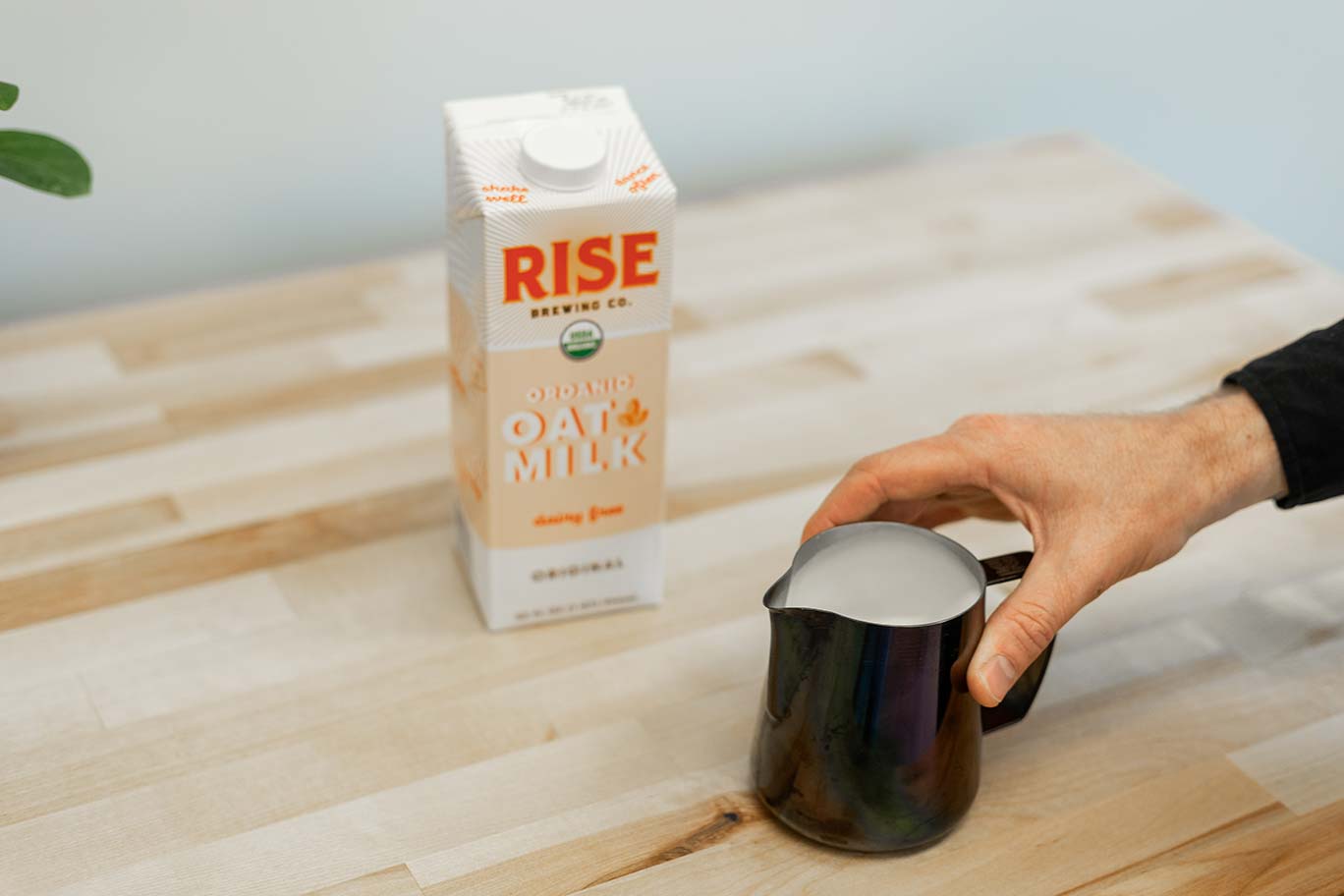 Across the board, oat milk, more than almond, steamed like whole milk, requiring the same strategy for stretching and vortexing. The resulting milks were glossy and polished, much like wet paint. Minor Figures and Rise stole the show in this category, though, because both produced minimal bubbles and a smooth surface, disguising themselves quite well as whole milk. Oatly fell short due to the lingering bubbles we could not always eliminate through steaming or banging the pitcher on the counter. Since Oatly took more finagling, even if only a little, it was bested in this category by Rise and Minor Figures, who tied for the number one spot. 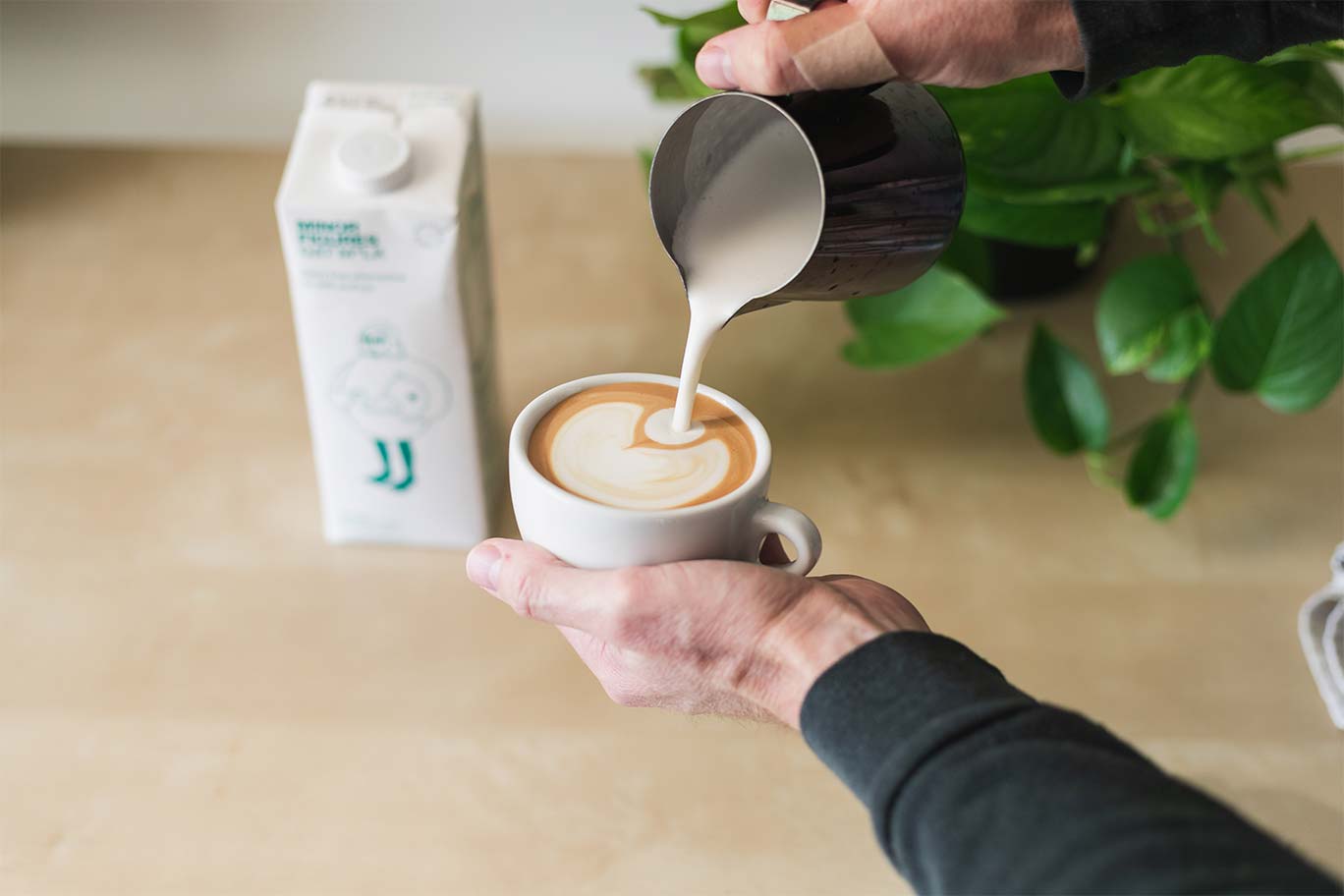 Due to the success in steaming oat milk, it should come as no surprise that it pours much like whole milk, too. Rise and Minor Figures both poured with no trouble, producing sharp, clean lines, and were complemented by clear contrast of the stark white and rich brown. Oatly, again, struggled in this category, likely due to the bubbles produced during steaming. The lines were not as sharp as we would have liked to see—evidenced by haziness and a lack of contrast—but not terrible. Again, it was difficult to separate Rise and Minor Figures, so they tied here, too. 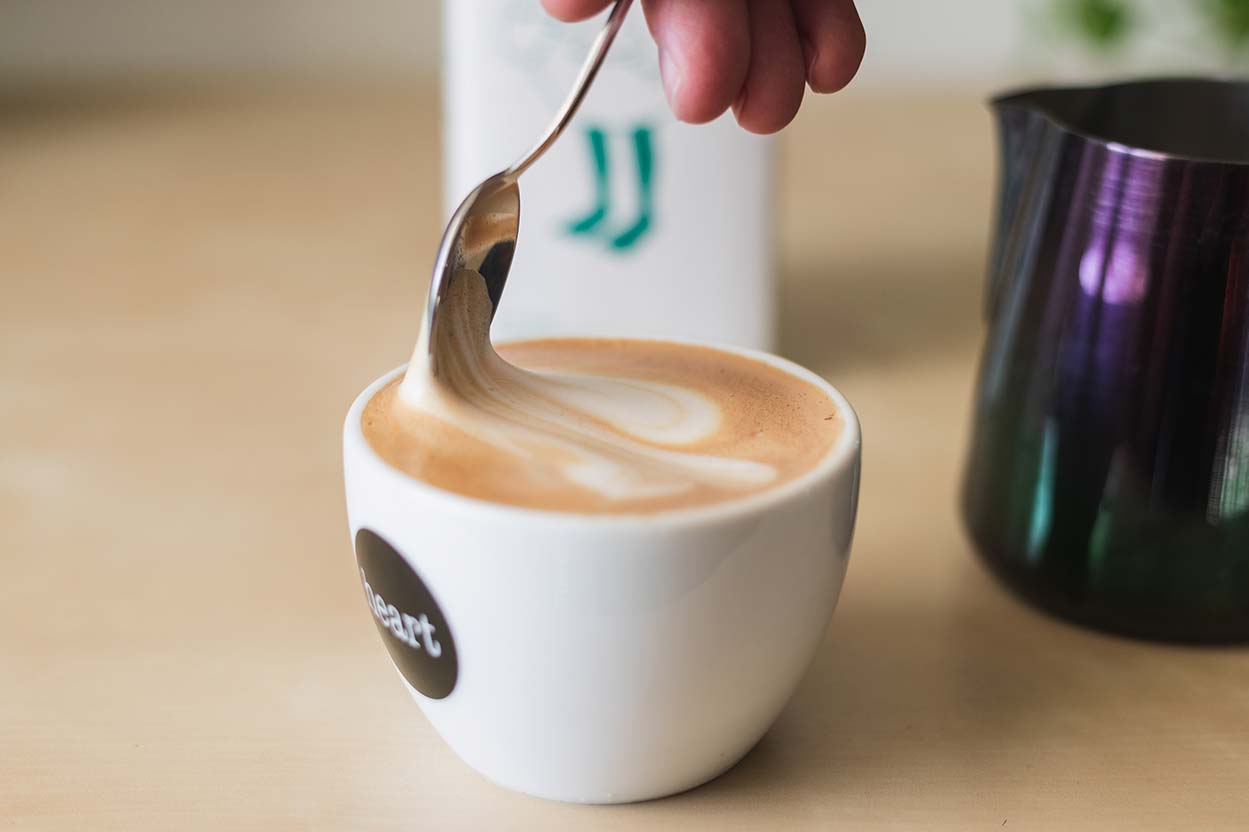 A good cappuccino brings together delicate, creamy microfoam, with rich, decadent espresso for a wonderfully balanced experience. Oat milk upheld the dignity of a cappuccino, but it was Oatly that really highlighted both the texture and flavor. The mouthfeel was creamy and full. The distinct flavors of the espresso came through. Overall, it was the most delightfully balanced beverage of the lot. Minor Figures was a close second, in texture and in flavor, but it was the additional sweetness observed in the stand-alone taste test that came through here and slightly impeded the espresso. Lastly, Rise simply overpowered the espresso, all of it, with a general unpleasantness we couldn’t name, falling far behind the other two. 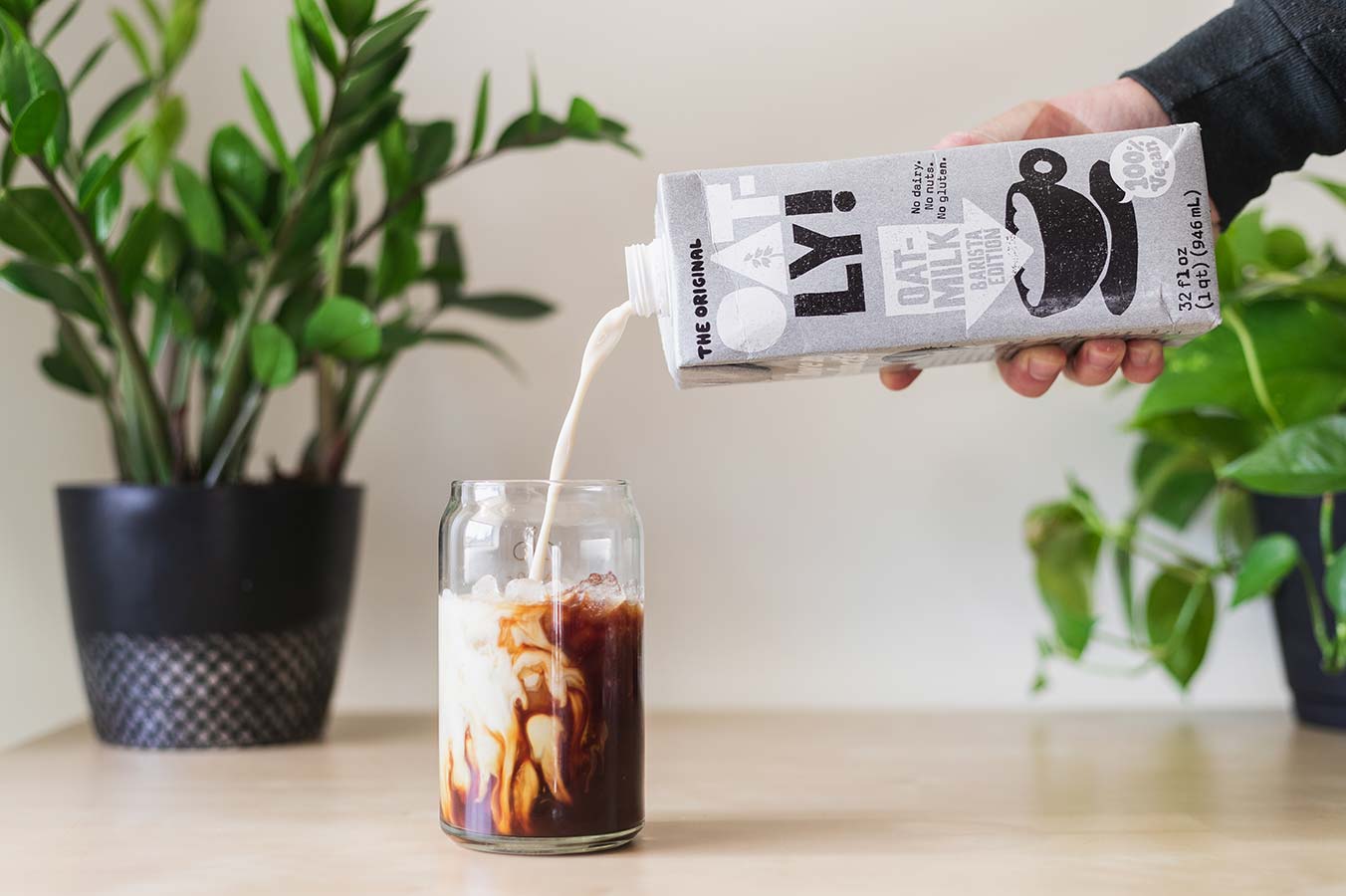 Iced lattes encompass a whole demographic. For some, the thought of starting their day any other way is absurd, and to question their beloved iced latte is blasphemy. Even though the iced latte is probably most commonly sweetened with a syrup, honey, chocolate, or simple syrup, we tested the almond milks in the classic iced latte, which has just three ingredients: ice, espresso, and milk. Oatly was the clear winner. The creaminess and subtle oatmeal flavor present in the taste test really shined through in the iced latte. It had a natural sweetness (without the need for flavored syrups) and made way for just enough espresso flavor to peek through to satisfy the craving for coffee. Minor Figures impeded the flavor of espresso with a tinge of ricey-ness, and the distinct flavor of Rise was overwhelming as it had been in its pure form.

The oat milk competition was a tie. Oatly won three categories (taste, cappuccino, iced latte) as did Minor Figures (steaming, pouring, cappuccino). Oatly had the slight advantage because it won two categories outright whereas Minor Figures tied in each of its first place finishes. That said, either would make a fantastic alternative to dairy milk in coffee. Rise, on the other hand, even though it steams and pours with ease, had the most intrusive flavors both alone and in coffee drinks. 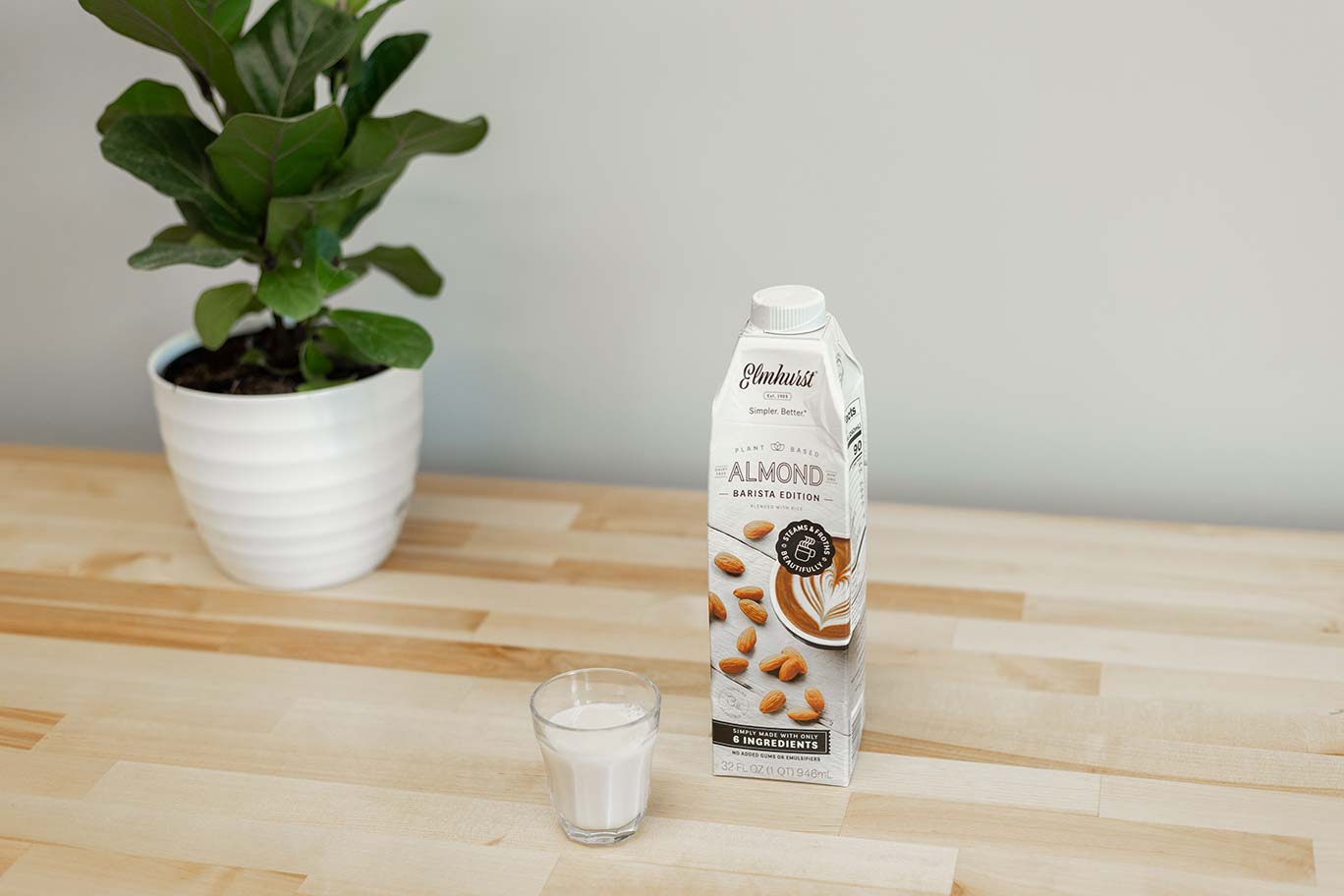 We favored Elmhurst in pure taste because of its—and this shouldn’t come as a surprise for the winner in this category—almondness. Elmhurst pours a light pink, betraying the fact that it has more almonds in every glass than Califia and Pacific, and that it has fewer added ingredients to change the original color. Elmhurst has just six ingredients overall, the main ones being filtered water, almonds, and rice; Pacific has nine, with cane sugar in greater amounts than almonds, a fact that bears out in its incredibly sweet flavor; and Califia has ten, including “natural flavors,” which maybe explains why it taste like marshmallows. Elmhurst, on the other hand, had a clean flavor, unencumbered by added sugars or other ingredients, and tasted, but not overwhelmingly so, like raw almonds. 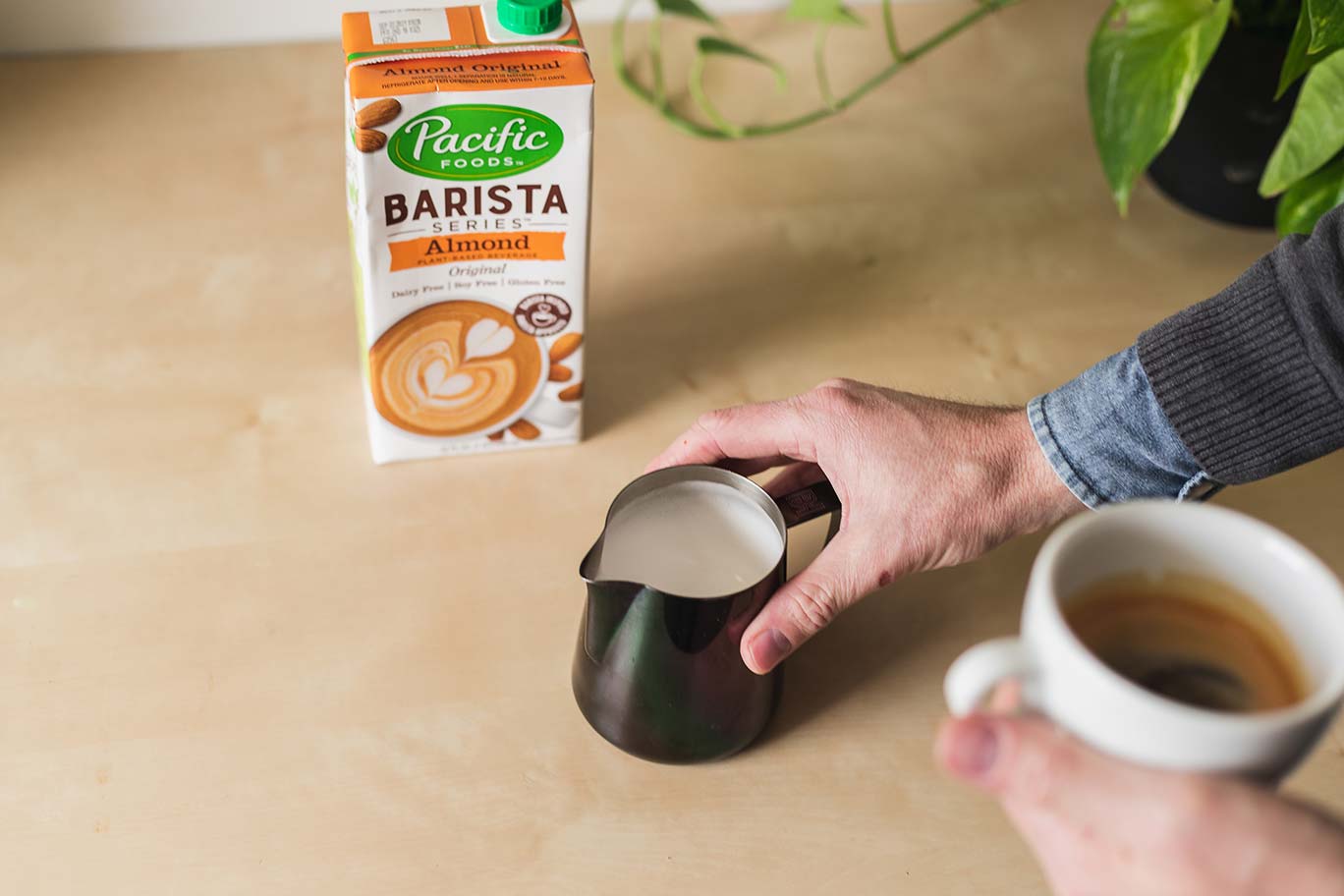 Strangely, all the almond milks, once steamed, radiated a sound like static. Elmhurst and Pacific were the easiest to steam, requiring the same strategy for stretching and vortexing as dairy milk. Califia required more aeration, but the sweet spot was hard to find, so the result was often overwhelmed with bubbles that had to be beaten down by hitting the pitcher on the counter. Overall, we were never able to get any of them looking as glossy and smooth as wet paint, something that was easy to do with oat and dairy milk, but we were able to reach a satisfactory smoothness. This one was too close to call, so we called it a tie. 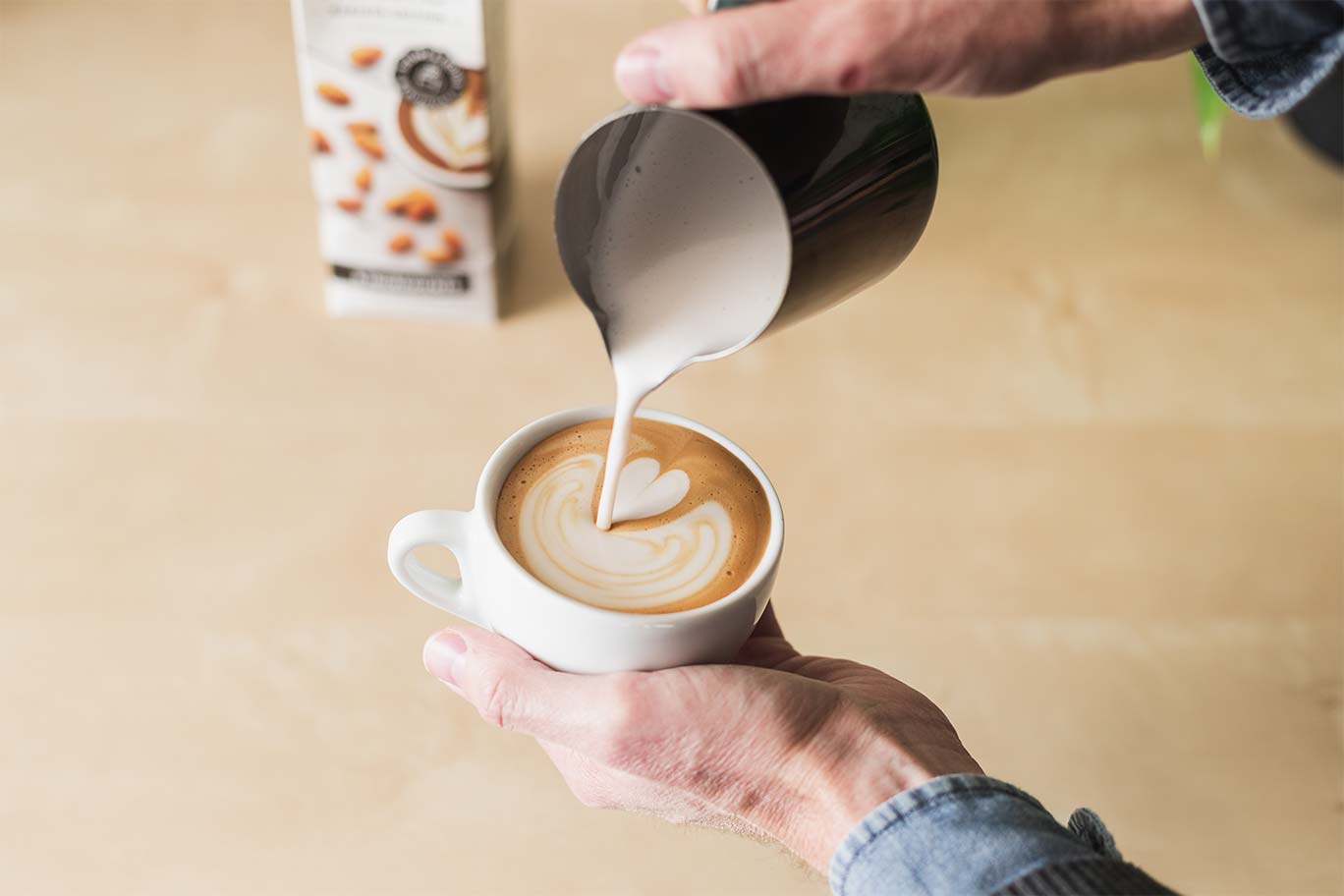 Unsurprisingly, given the difficulty in steaming, none of the almond milks poured easily. We are not latte art pros, but we aren’t slouches, either, and have little trouble pouring a respectable heart, rosetta, or tulip with whole milk. Our struggles here were likely a result of our struggles with steaming. Pacific poured in thick white blobs as if we had over-aerated even when we did not, making it nearly impossible to achieve definition in the lines. Califia was a little easier to maneuver but ultimately, like Oatly, showed too much haziness around the edges of our designs. Elmhurst, which was at first the most difficult to pour, became, after some practice, the easiest to pour with definition and contrast. We feel like a more skilled barista would have been able to master Pacific, maybe Califia, too, but we were running out of cartons and it wasn’t getting any easier for us. 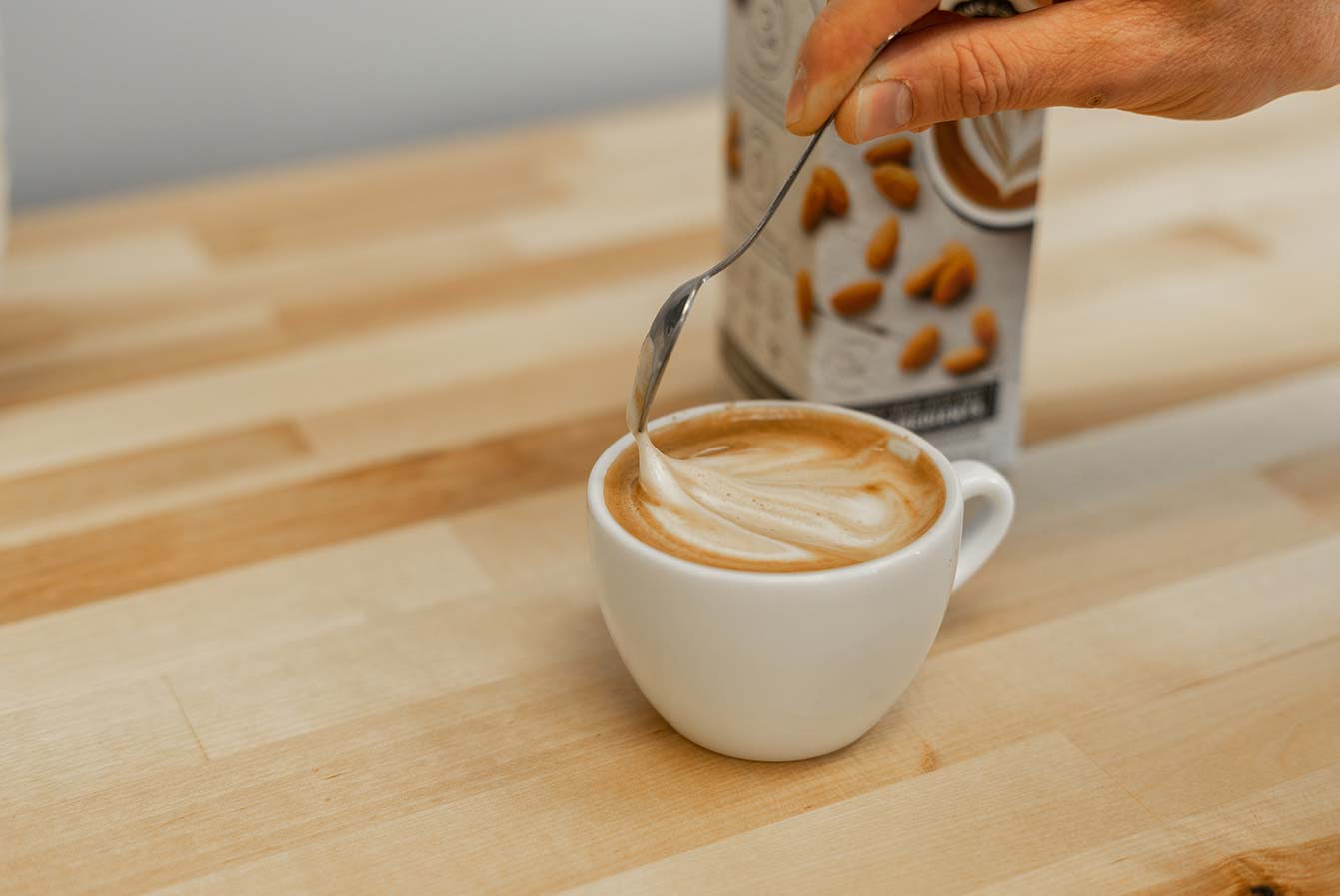 The three almond milks we tested could not master the balance necessary in a cappuccino. Part of the problem is that whatever creaminess we were able to attain through steaming stayed on top of the drink, most markedly so in Pacific. The other part of the problem is that there isn’t a natural sweetness in almonds and thus their milk that can be brought out in steaming. All three milks we tested, then, included among their ingredients, added sugar, with Pacific packing in 8g, Califia 5g, and Elmhurst a respectable 3g. Unsurprisingly, Pacific was way too sweet, totally overwhelming the flavor of coffee. Califia was sweet, too, but it was the marshmallow flavor, a kind of false vanilla, that overtook the cup. Elmhurst, which was our favorite, was the image of restraint. The almond, while present, was subtle, and the sweetness subdued, allowing the coffee to come through. 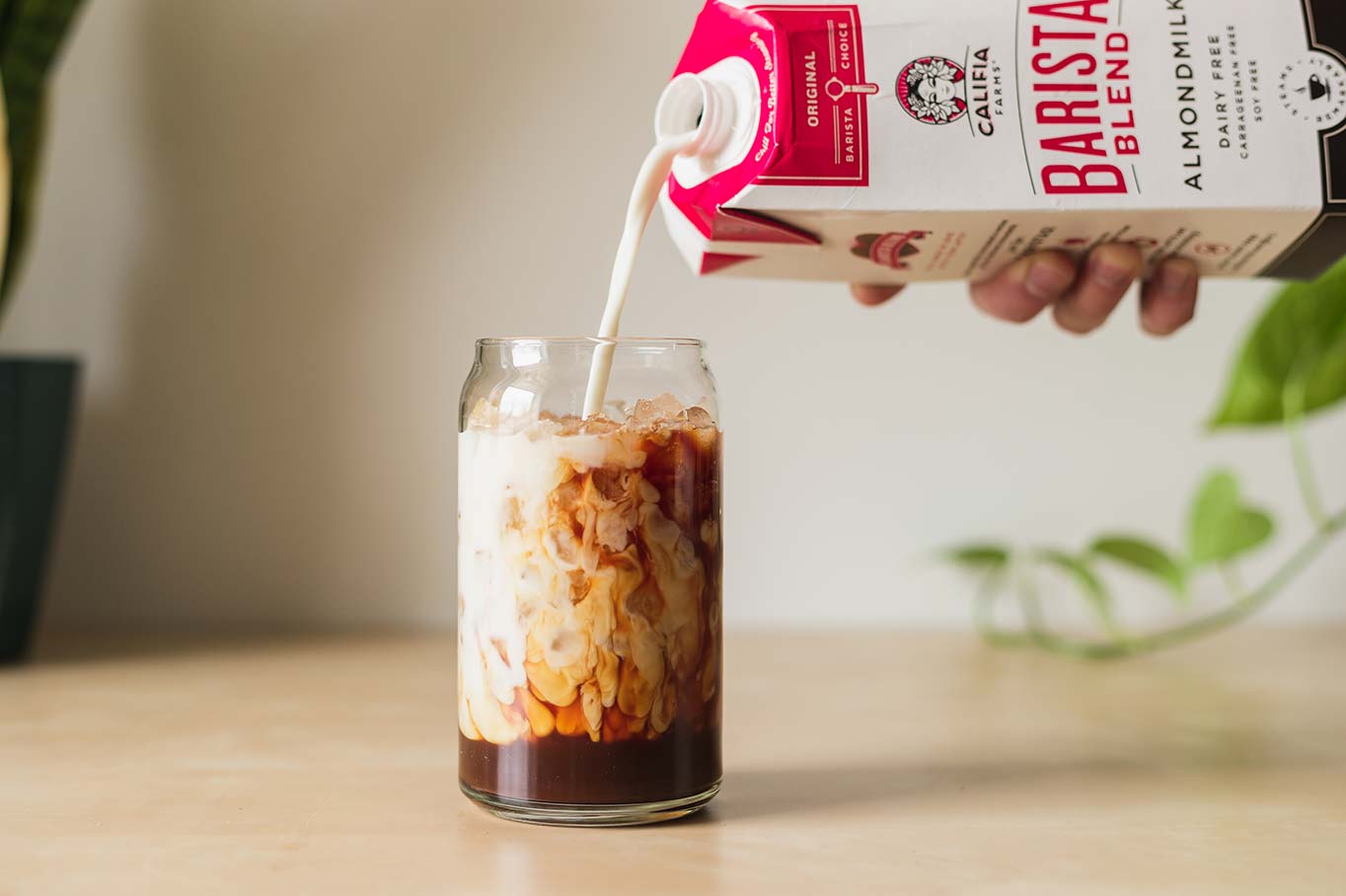 An iced latte must be refreshing like other iced drinks yet reminiscent, if distantly so, of a hot latte, and therefore abstractly warming. Unlike the cappuccino, though, balance is not the goal. In a latte, the dominant flavor is cream, not espresso, although the espresso should lend an undercurrent of cocoa or dried fruit. The results of this one surprised us. We love the taste of Elmhurst (see above) when it is by itself or balanced in a cappuccino. However, the consensus was that the iced latte with Elmhurst tasted too much like, well, milk. Pacific was overall too sweet still, but cold Califia with espresso tasted subtly like a mocha—don’t ask us how; we know there’s no chocolate in there—and was preferred over the other two, if only slightly.

Elmhurst, because it is easy to steam, easy to pour, and makes a balanced cappuccino, and because it showed up in the number one spot in four categories, earned first place. That said, we can see why Pacific or Califia would work well, too, especially for doing double duty as an alternative milk and a sweetener, which many customers (and some around the office) like. We think, too, that with some practice Pacific, but not Califia which gave us fits, could be poured just as well as Elmhurst. The final decision comes down, as it often does, to preference. If you want a sweet alternative milk, almond milk is a good choice. If you want a subtle sweetness and a true almond flavor, Elmhurst is for you; and if you want an overwhelmingly sweet drink, Pacific is for you. Califia is somewhere in the middle, but in our opinion tastes a bit artificial except, for some reason, when used in an iced latte.

Even though we conducted each test individually, and each category had a winner, we had an overall favorite. The consensus around here was that oat milk was closer to cow's milk than almond milk in its mouthfeel, steaming, and pouring. We also preferred its taste in cappuccinos, iced lattes, and alone (with the exception of Rise). In the end, it really comes down to a matter of preference. Here at Prima, though, we are self-declared Oaties, and think it is the user-friendliest choice for baristas, at home or at cafés.

The next step, after finding the right milk, is to hone those barista skills, especially steaming and pouring, which will ensure that your drinks look and taste beautiful and balanced. Head on over here to read our complete guide to pouring latte art or skip right to here to see those tips in action.

Finally, for the curious barista, here is a list of the equipment we used for the comparisons: