So, perhaps you have made the decision to put the ole blade grinder to rest and make the courageous and intelligent decision to upgrade to a burr grinder, and for that, we applaud you! Or maybe you already have a burr grinder, but you’re unsure of the differences are between conical burrs and flat burrs, what they mean for your grind, and most importantly, the flavor of your coffee. Either way, we’re glad you’re here!

There's an ongoing discussion within the coffee community about which burrs are better, and honestly, we’ll vouch that both do a pretty phenomenal job grinding your coffee beans, but like most things, each has their strengths and their weaknesses.

We want to lay it out for you, plain and simple, and expose where each burr excels and falls short, and hopefully leave you with the information necessary to decide which one is right for you. So let’s break it down! 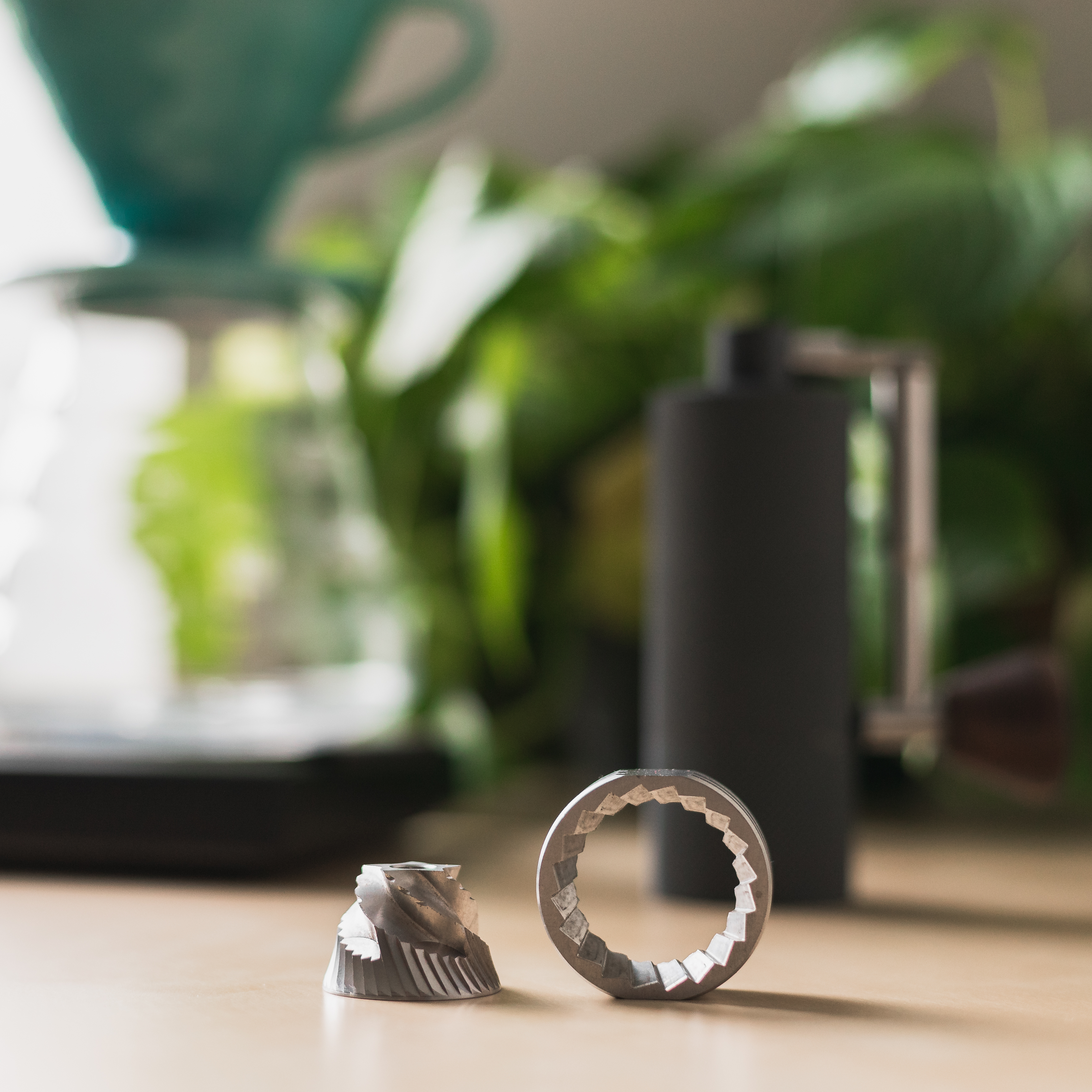 Conical burrs are, well, conical — cone shaped. They are present in both commercial and home grinders, and are the primary burrs found in manual grinders, with a few exceptions.

The structure of a conical burr set consist of a cone-shaped inner burr that fits comfortably inside the ring-shaped, outer burr. The inner burr rotates while the outer ring-shaped burr remains stationary. It's the distance between these two burrs is what determines the size of the grounds. The closer they are together the finer the grind. With the help of gravity, the beans move from top to bottom, sliding between the burrs where they are ground, and make their way down the chute into the grinds catch or portafilter. 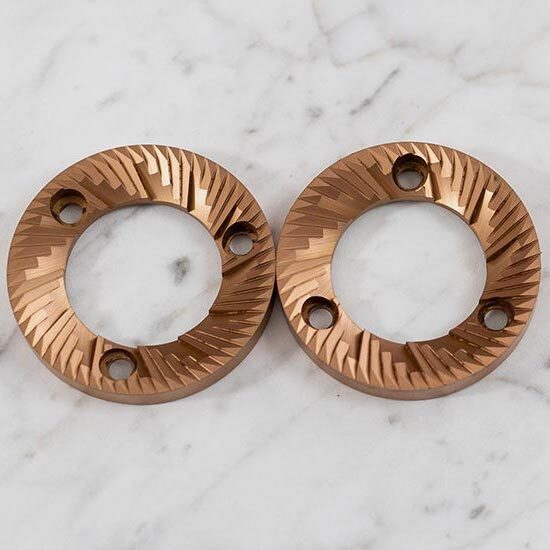 Flat burrs are, yep you guessed it, flat. They are two round serrated, donut-like burrs that typically align horizontally with one another. These are predominantly found in commercial espresso grinders, but they are also available in upper level home grinders.

Like the conical burrs, one remains stationary while the other does the spinning. The beans are pushed through and crushed to their desired size due to the distance between the burrs. But, unlike conical burrs, the grinds are expelled through the sides.

Grind particle distribution can be most easily be explained as the varying sizes of particles present in your coffee grounds. A uniformed grind size makes for the most even extraction because all of the particles extract at the same rate. Conical and flat burrs differ in this area. 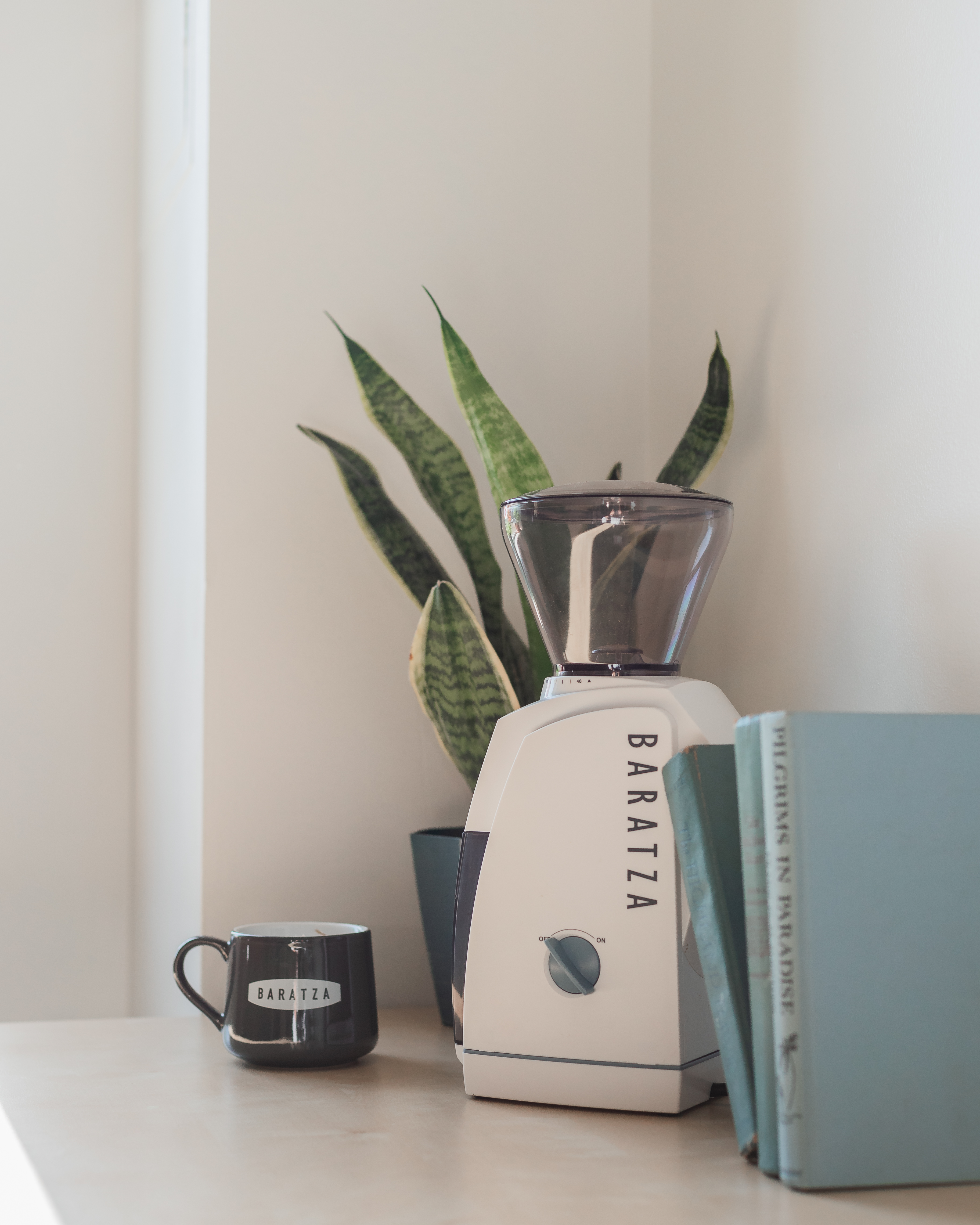 Conical burrs create bimodal grind sizes. This means that when looking at the grinds under a microscope, or using a sifter, it will become apparent that the grinds are two different sizes — fines (super small grinds) and larger ones.

This poses a problem come extraction time. The fine grinds, due to their size, will extract at a much faster rate than the larger ones. In this case you will be left with an unpleasant, unbalanced brew. 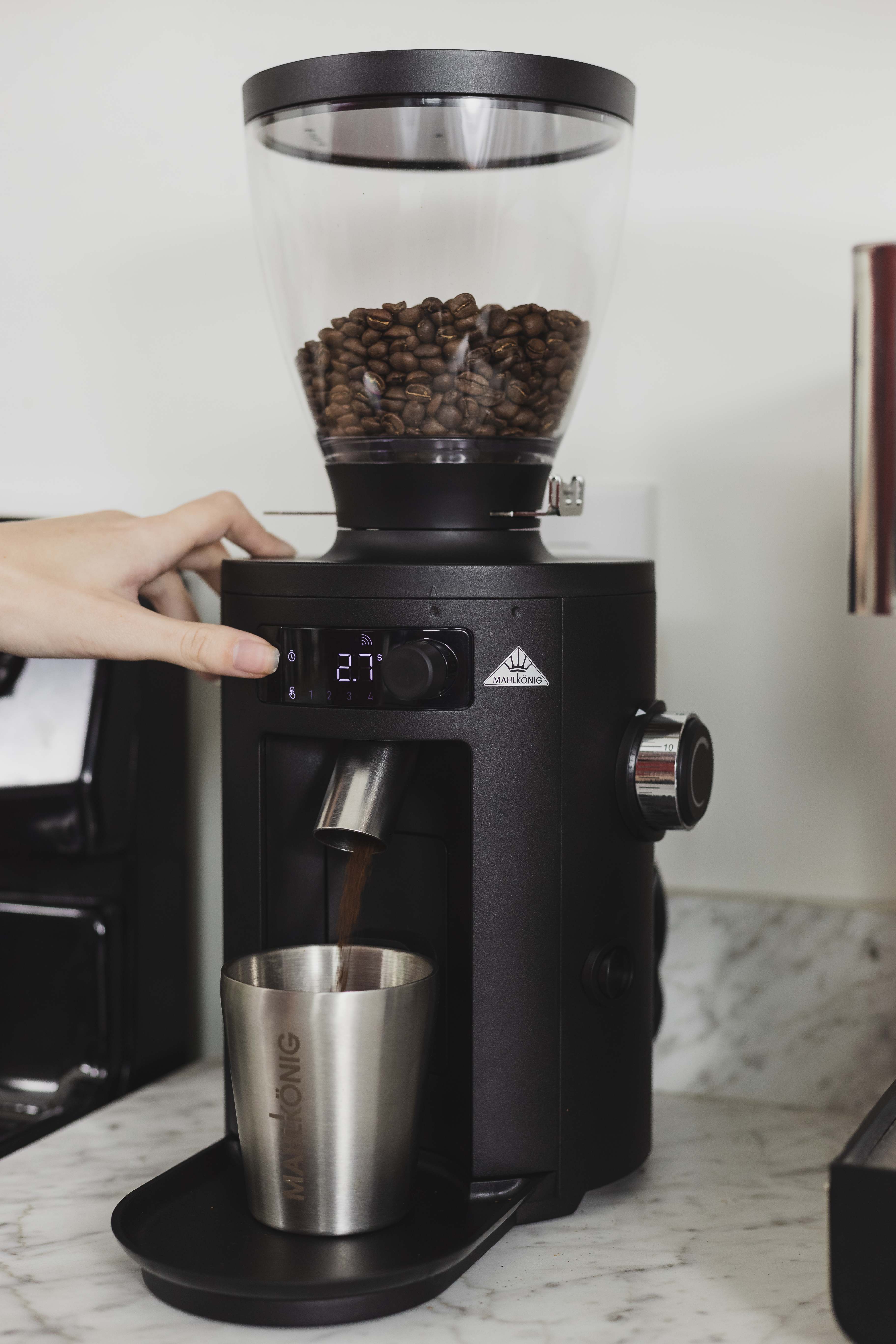 Flat burrs on the other hand produce a unimodal grind. This means that all the grinds produced are relatively the exact same size. Likewise, this means that you are left with a more even extraction due to all of the grinds extracting at the same rate.

It should be noted that this is a hot topic of debate in the coffee community. Some feel that this makes the most difference in espresso because the uniformity and allows for longer pulls, resulting in a more robust shot that captures the brighter, sweeter notes of the coffee. However, others believe this more important in filter coffee because the fines can restrict flow rate, and in return leave you with an over extracted brew.

Retention is the amount of coffee left behind. This can result in issues when changing grind size, staleness, and money lost. However, this is not solely caused by burr shape. Many other factors come into play and they vary by grinder. The angle in which the burr is positioned within the grinder, the burr chamber, and the chute all play their part. However, one burr is believed to produce a higher retention rate than the other. 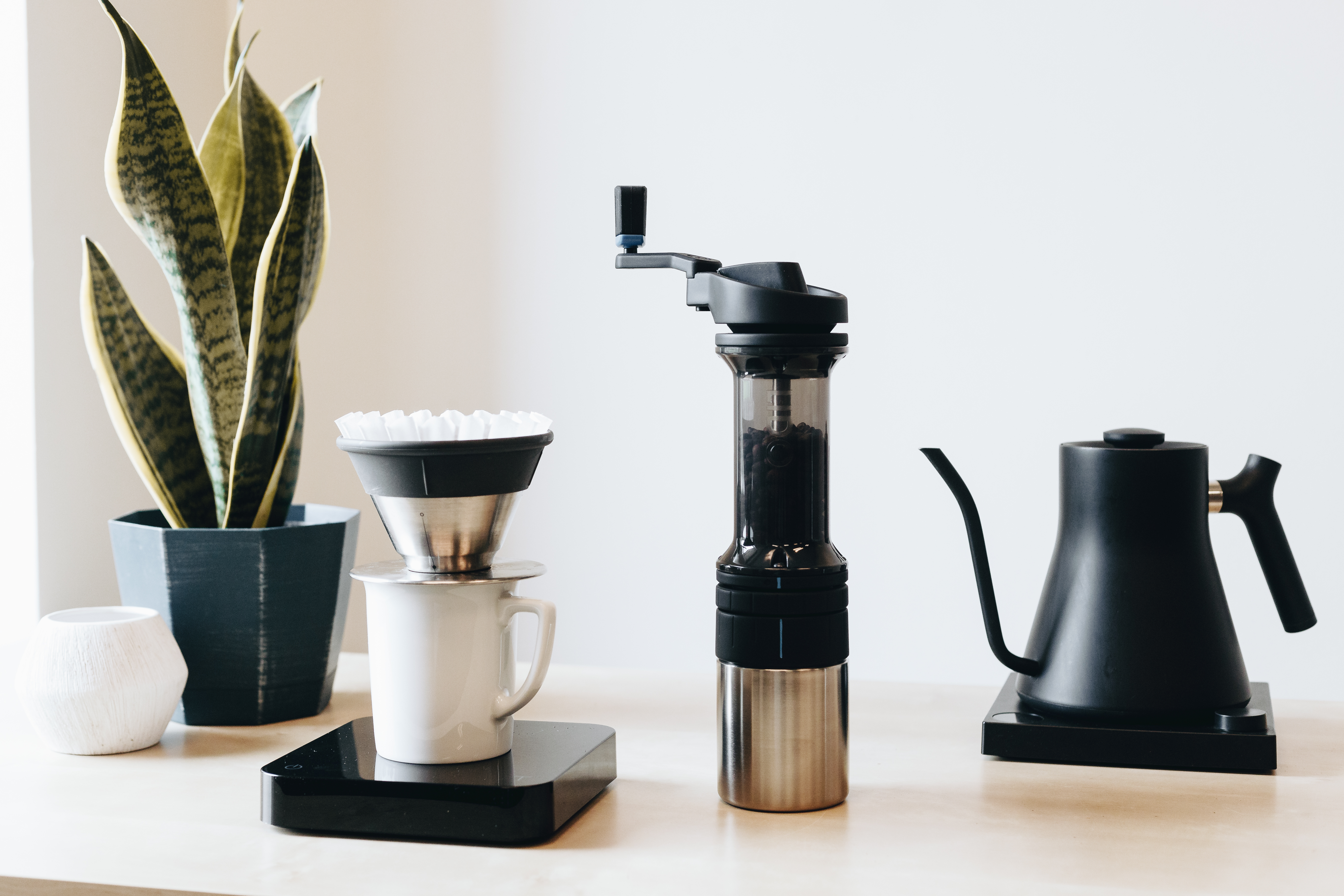 Conical burrs have a lower retention rate thanks to the help of gravity and their vertical position within the grinder. Because of these factors, the grinds are expelled through the bottom of the burrs rather than being expelled from the sides, this results in less grinds being stuck in the teeth and burr chamber. 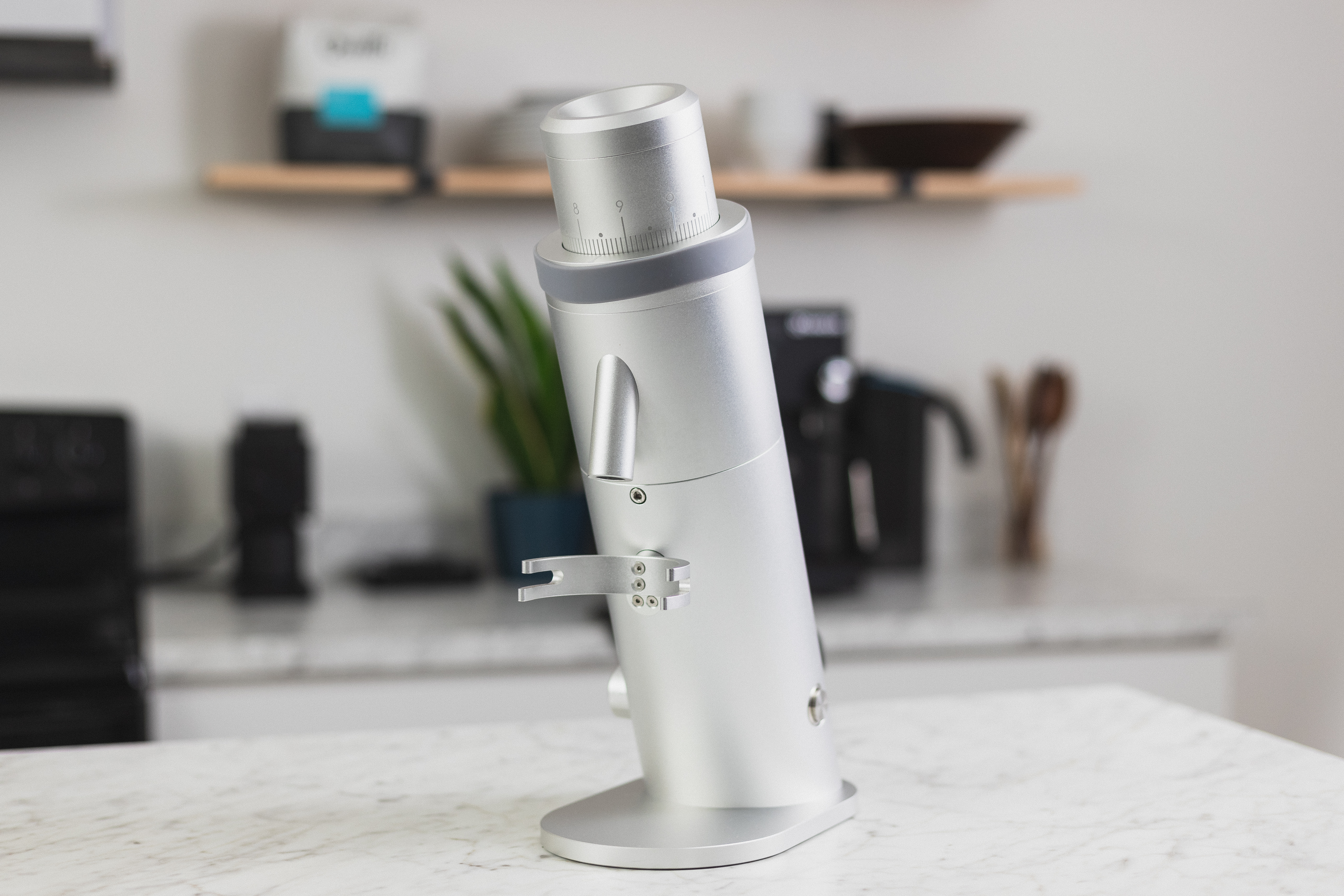 Flat burrs on the other hand tend to have a higher retention rate. This is largely due to how the burrs are positioned inside the grinder and how the grinds exit the burrs. Because flat burrs are often mounted horizontally, there is no help from gravity. This means the grinds are expelled from the sides with the help of the motor instead. The exit of the grinds lead to more remaining on the teeth of the burrs.

Again, burrs are not the only thing at play when it comes to retention rate. It has become more common to find burrs mounted at an angle, as is seen in the Apex and Lagom rather than vertically or horizontally. This change in angle helps to lessen the retention.

Heat produced by the friction of the grinder motor can adversely affect the roast of your coffee beans and result in altered flavor and grind. This is most evident in grinder in flat burr grinders, especially those performing in a high-volume, commercial setting. This rarely is an issue in a low-volume or home setting where it has time to cool between doses. 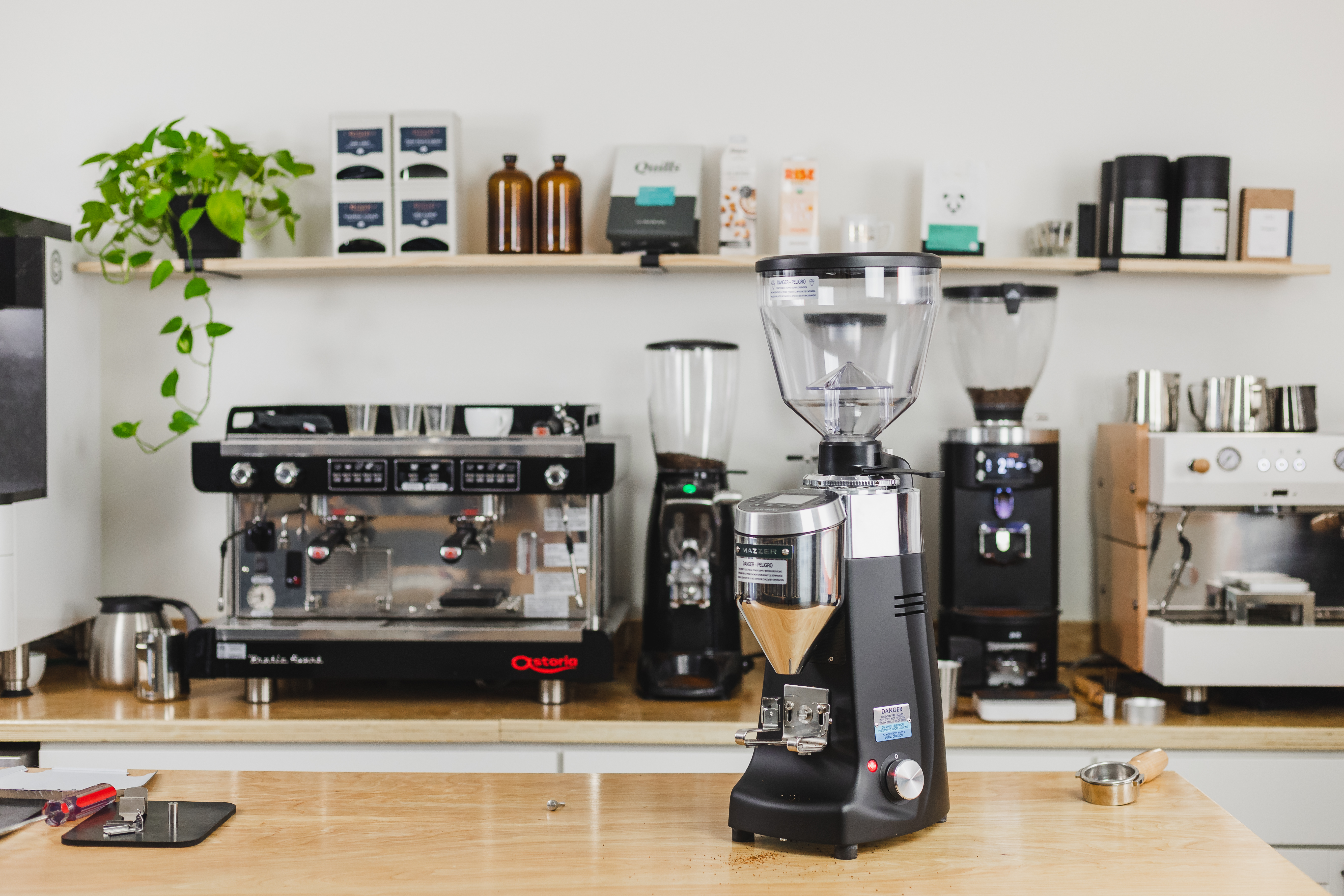 Conical burrs are typically found in lower-RPM grinders. These grinders do not produce as much heat due to the need for less power to run them. Conical burrs feed and dispense the beans with the help of gravity, resulting in less needed from the motor. As was mentioned above, this is a pro for conical because the added heat can have a negative effect on the overall roast and grind consistency. 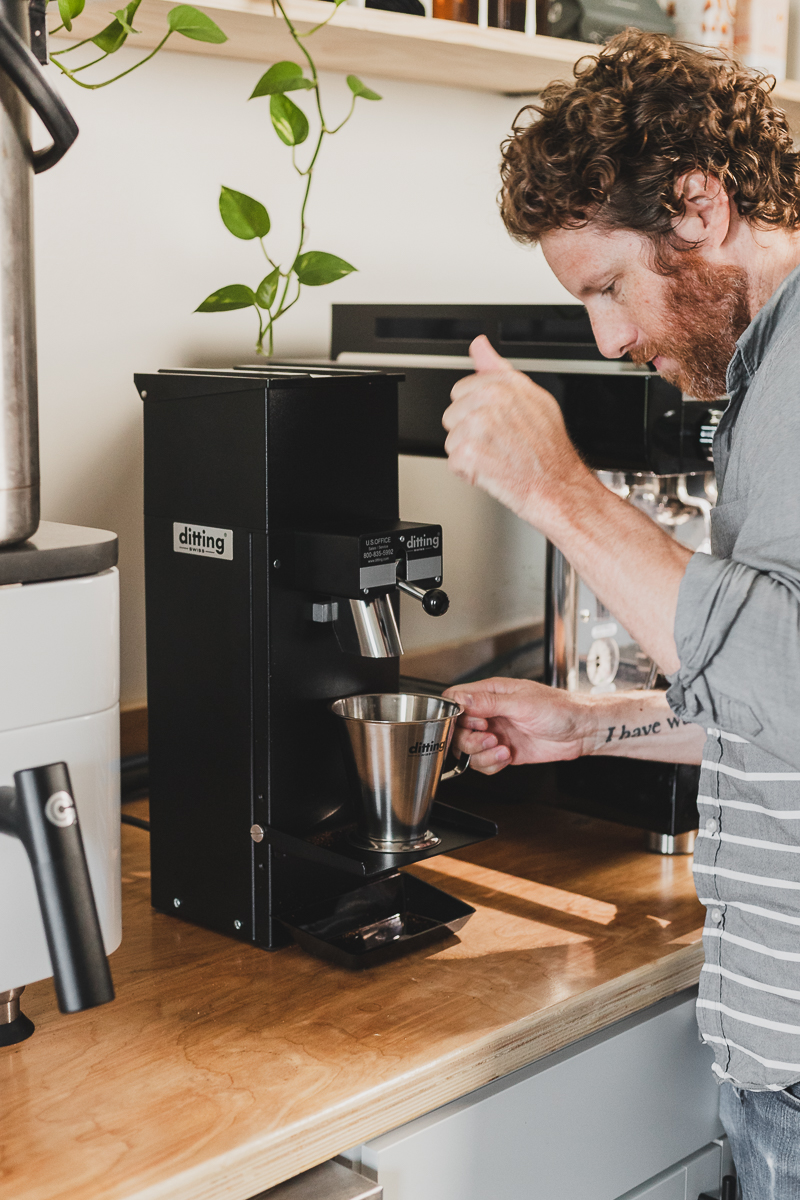 Flat burrs need ample power to do their job; typically requiring a motor that of at least 700 RPM. Excessive heat is produced due to the motor is running at such a high rate, working to feed and expel the beans from the burrs, which results in extreme friction. This occurrence is most evident in espresso grinders because of how finely they must grind. Because of this, many are equipped with fans to actively cool the grinder as it runs. However, some grinders, such as Ditting grinders, don't have fans even in high-volume environments because their large discs (ranging from 80-140mm) act as a heat sink.

Other things to consider

We have laid out the greatest differences between flat and conical burrs, backing the earlier statement that both possess a fair share of strengths and weaknesses. Additionally, flat and conical burr grinders do vary in price and features. For example, a conical grinder will typically ring up at a lower price tag than a flat burr grinder because of the motor. The larger motor of a flat burr grinder plays a factor in noise as well — it's typically quite a bit louder.

Beyond the shape of the burr, material of the burr matters too. Burrs come made of ceramic, and others made of steel, they can be coated in titanium or titanium aluminum carbon nitride (Red Speed), which play additional factors in the quality of the grind.

Your grinder is your most trusted ally behind the coffee bar. A great grinder makes for great coffee. As you can see, both burrs produce quality results and both have their own strengths and weaknesses. Truly, it comes down to your unique wants and needs. Take a moment to check out our full inventory of coffee and espresso grinders to find out what's best for you!