A little over five years ago, Baratza launched their high-end Forte line, aimed at filling the niche for a small but hardy grinder that could easily do double duty in a low volume commercial environment or on a prosumer home coffee bar. The features set included metal internals for extra stability and a more solid build, a shut-off hopper for easily switching between beans or just cleaning out the burrs at night, the ability to grind by weight or by time, and in the case of the AP (All Purpose) model, an included portafilter holder for grinding directly into your basket. The other model, the BG (or Brew Grinder), was indeed designed specifically for grinding doses for brewed coffee rather than espresso. The steel flat burrs were meant to reduce fines in medium to coarse grinds, whereas the ceramic AP flat burrs tended to make for a full bodied espresso but a somewhat dusty or muddy V60 brew. But here’s a little secret for you: those steel burrs are actually quite good at espresso as well.

I’ll be honest, calling it a “secret” is intentionally tongue-in-cheek; Baratza hasn’t been hiding this fact, and not long after the initial release we saw them doing side-by-side espresso demos with both Forte models at the annual Coffee Expo. However, it does seem to be a lesser-known fact, perhaps because the name “Brew Grinder” dodges the idea that it might be acceptable for espresso as well. Around here, we really love the performance of the Forte BG as small espresso grinder, so I figured it deserves a bit of special attention.

For the last few weeks I’ve been working with an assortment of coffees to gauge where the Forte stands now - the BG is priced just over $900, so that puts it not only in competition with a Sette 270 that costs less than half as much, but also some actual commercial espresso grinders with similar burr sets. The allure of the Forte is certainly that it packs a lot of features and power into a very small footprint, but if there is any sacrifice to grind quality or shot flavor then a potential buyer may rightly look elsewhere. For my testing, I focused specifically on ease of dialing in, perceived retention (I’ll explain that idea below), grind speed, and most importantly, shot flavor.

The Forte, like the Vario line that came before it, uses dual-cam levers for its grind adjustment. One side handles the “macro” settings, the other handles “micro,” for a total of 260 total setting points. While this isn’t truly stepless, like many higher end espresso grinders are, it comes close enough to pass muster. I never once hit a point where my ideal grind setting would have been between two micro-steps - in fact most often my fine tuned adjustments needed multiple micro-steps of movement to get to the right spot. You may also need to adjust your grinder calibration finer to use it for espresso. Baratza includes a calibration tool for the job, which can be done in just a few seconds. I needed to adjust ours by about a half turn of the tool to get access to the right espresso settings. A setting of 1-F (macro-micro) was about as fine as I ever needed for a more dense, light coffee, and I wound up on 2-K for a darker blend. 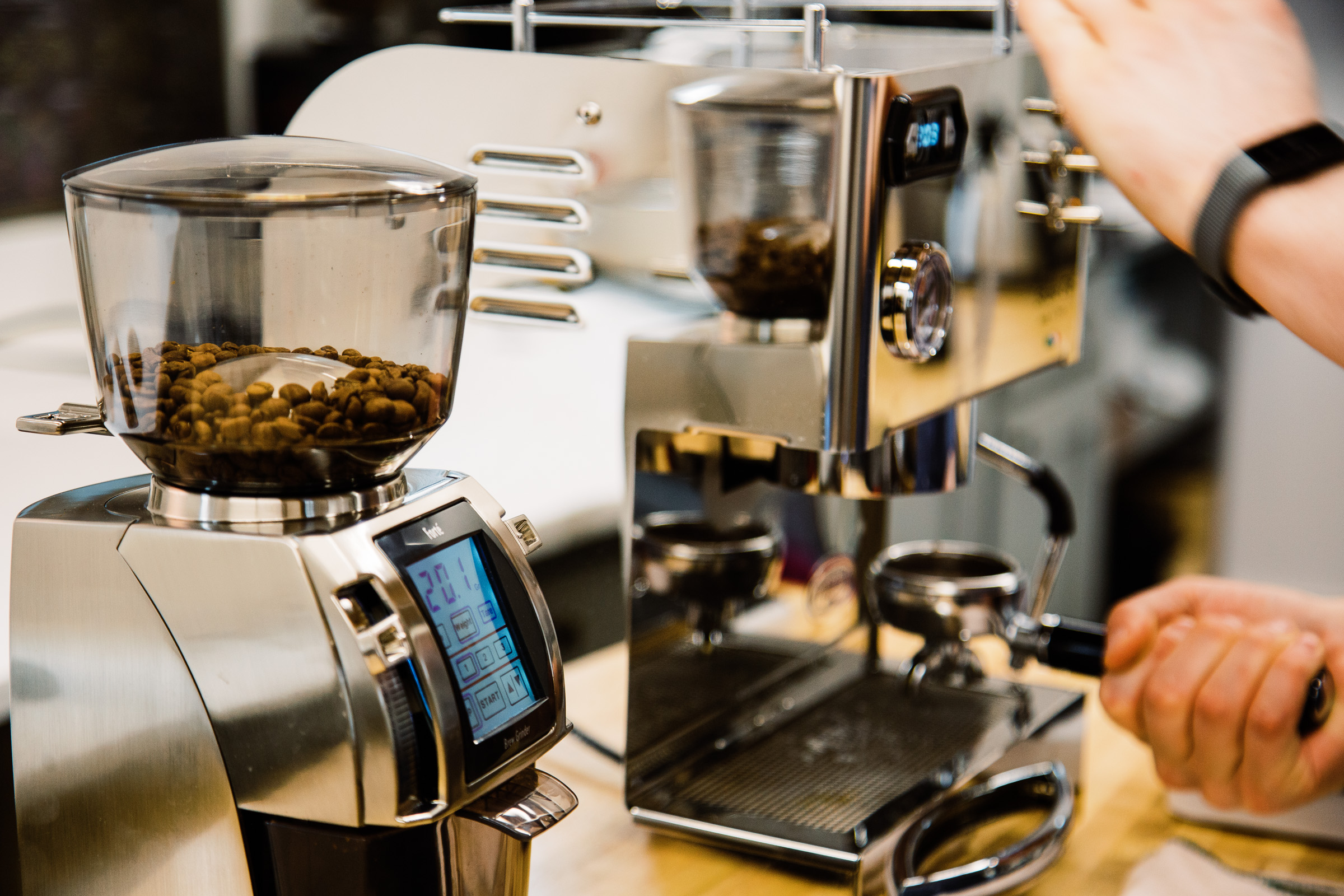 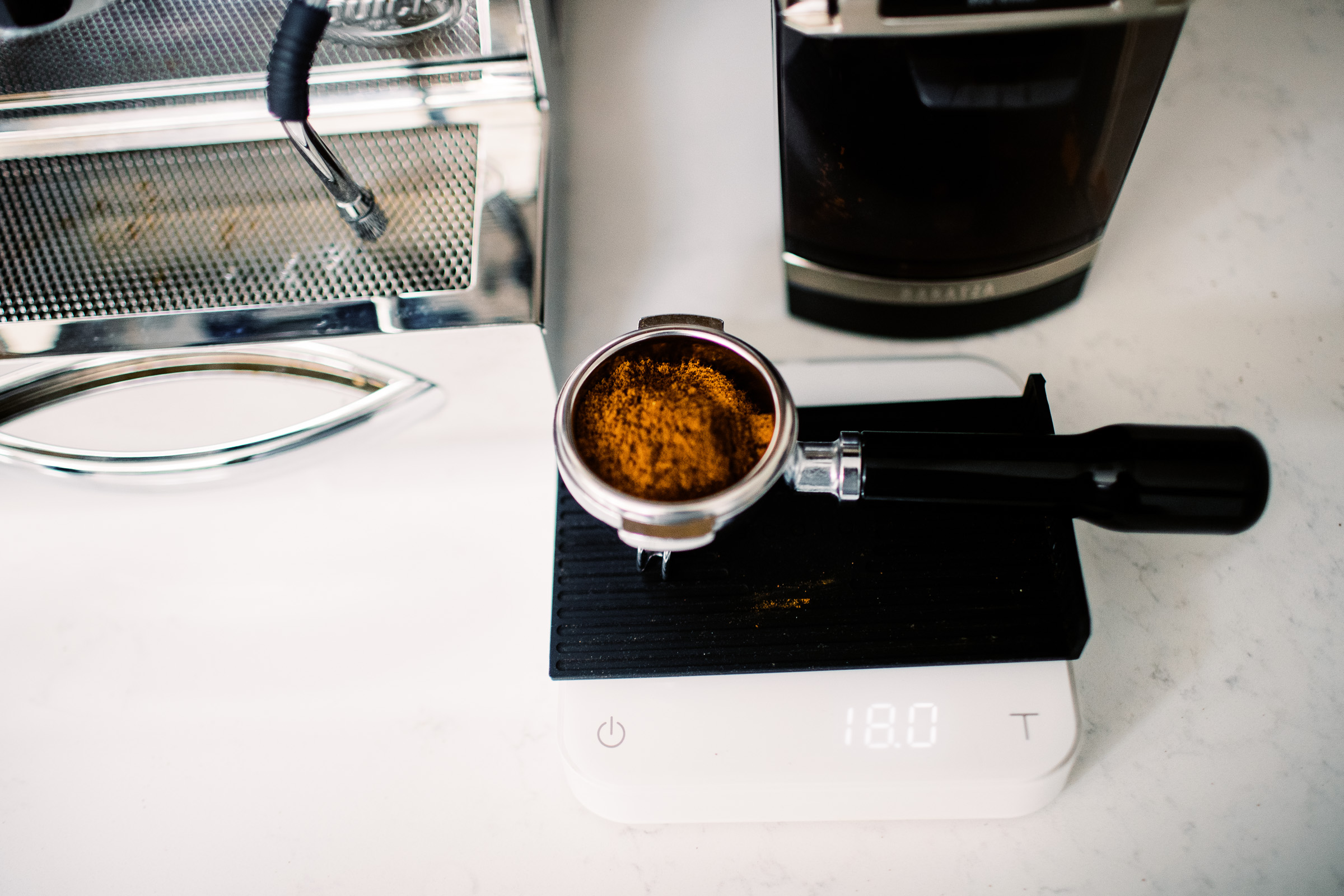 Another consideration to keep in mind for the BG burrs: they do have a short break-in period when brand new. The machined surfaces of the burrs lose some sharpness through the first few uses, so shot to shot I saw much less consistency. I needed to put about one pound of beans through the grinder before my shots got more consistent, and after two pounds they were quite steady. You could buy cheap “burner” beans for this break-in, or perhaps just grind a bag or two to make some cold brew!

Dialing in espresso with the Forte is straightforward, like many other espresso grinders. I always start by running maybe 20 grams of beans through at a setting I think will be close to the espresso range I’m looking for. I’ll grab some of the resulting ground coffee and pinch it to see if it clumps together, and feel to see if it feels more like sand or ground chalk. From there, I’ll make any up-front grind changes, add coffee to the hopper and start pulling shots. Within about 5 shots, I was pulling good shots on the Forte BG. My first coffee was a natural Ethiopian coffee roasted a touch on the lighter end of medium. It was a great pick for espresso as it had lots of natural sweetness to unlock and it was quite soluble, but it could come off dry or bitter if not extracted well. Those first successful shots had lots of dried strawberry and honey sweetness, a good coating mouthfeel, but finished a little like bitter cocoa powder. A quick tweak of the grind two micro-steps coarser, and the next shot finished a little cleaner. With no change in grind, the very next shot had a much smoother finish with next to no dryness and the sweetness persisted a lot longer. This leads me to believe that the retention between doses is probably less than my 19 gram starting dose. 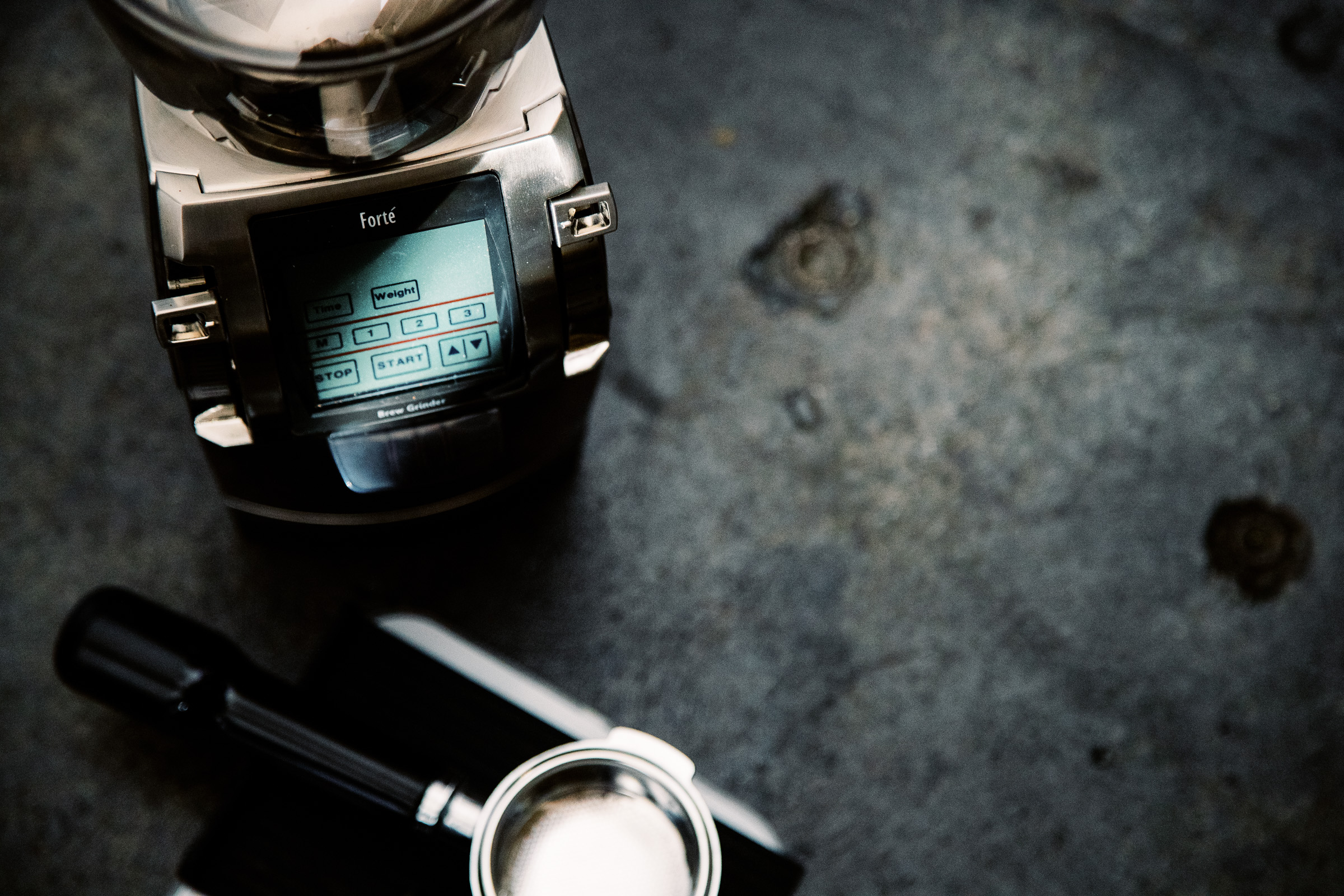 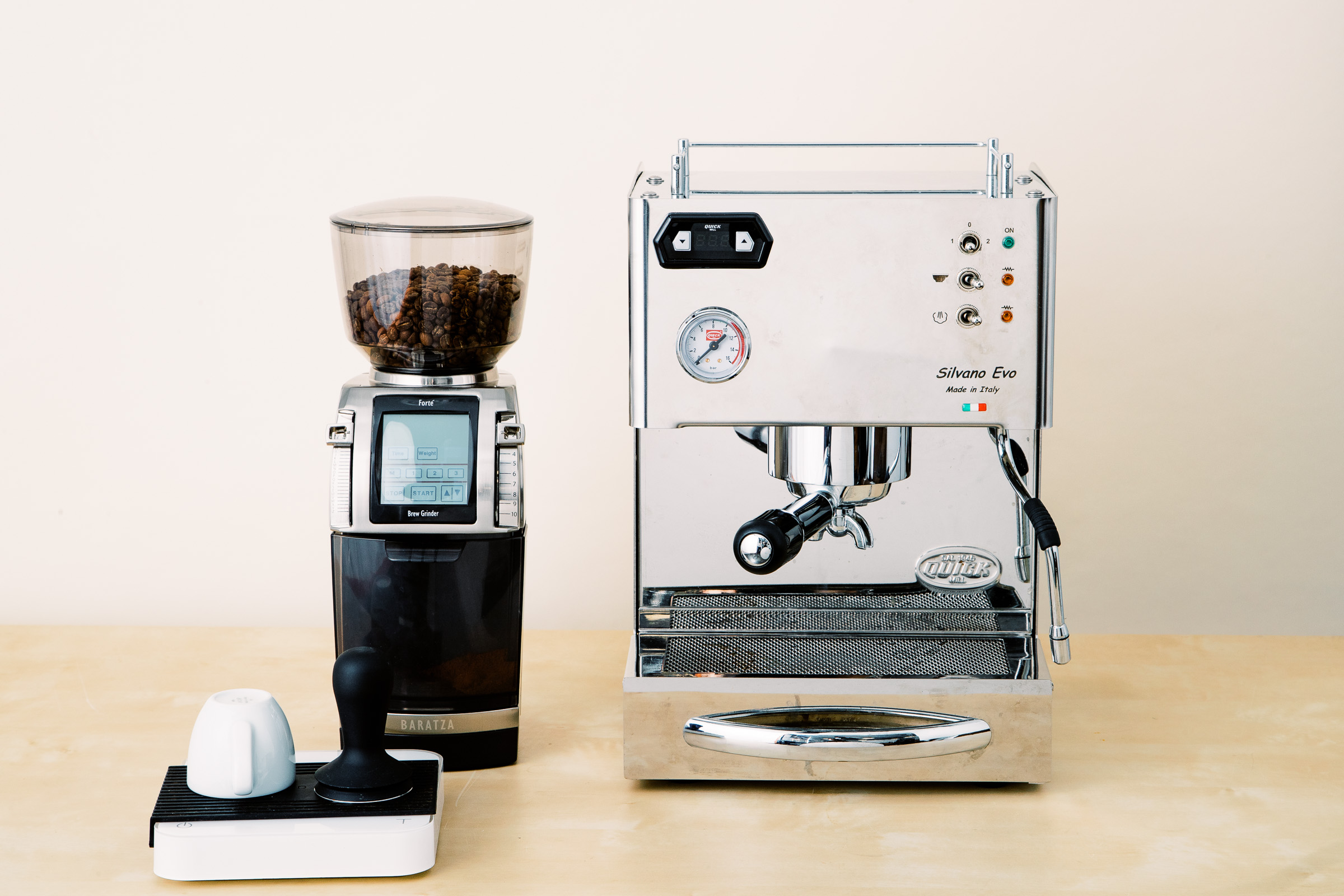 I mentioned “perceived retention” above as one of my judgment criteria. When doing these tests, I didn’t actually measure retention in any of the grinders (we have done so in the past). Instead, I looked for how many shots were needed for a change of grind to settle in or take. The example in the paragraph above is a good illustration of the idea: the Forte retains enough ground coffee within its grind chamber and chute that a grind change does not yield a full and immediate change in the next shot, but it’s small enough that only a couple doses will clear it out completely. In some grinders, that change may not be obvious for 3-5 more shots, which means that you likely need to purge the chamber by grinding 30-60 grams of coffee or more and discard it. I’ve used a good many commercial grinders that retained multiple full doses that would taint nearly 5 shots’ worth of coffee, so any grind change would be followed up with a huge purge of coffee. For home grinders, the retention tends to be lower and more in line with the Forte. Baratza’s Sette has almost no retention to speak of, so a change in grind setting could yield good results the very next shot - though with some coffees it may take one more after that to really settle in.

The Forte’s grind speed is perhaps one of its weaker points. At espresso settings, I was grinding at a rate of around 1 gram per second. Lighter coffees at a finer setting took a little longer, but the fastest I was able to achieve with any coffee was still under 2 grams per second, meaning a 19 gram dose took over 10 seconds to grind at the fastest. With the Sette, I could grind the same dose in closer to 5 seconds, and with a commercial grinder I could do the same in 3-4 seconds. At home, this time difference in minimal - though grinding for almost 20 seconds straight first thing in the morning could prove unfortunate for anyone else in the house still trying to snooze. But the Forte is marketed as a light commercial grinder as well, and a 15-20 second grind time is potentially a deal-breaker for a business. A small commercial grinder like the Mazzer Mini grinds at a similar speed, but the more expensive Mahlkonig Peak could cut that time in half. Your grinder budget and workflow needs will determine whether or not the Forte is a suitable espresso grinder for you. 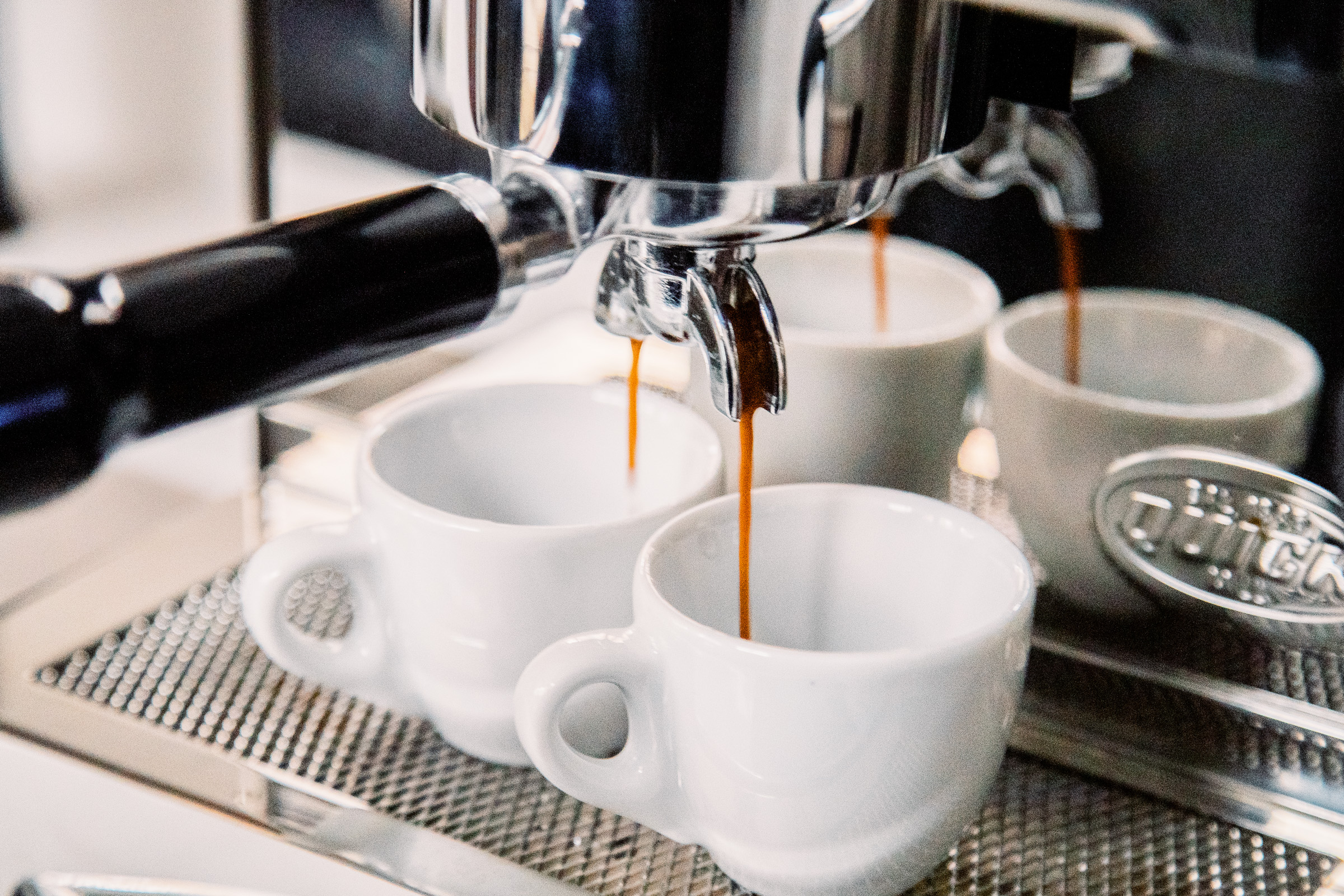 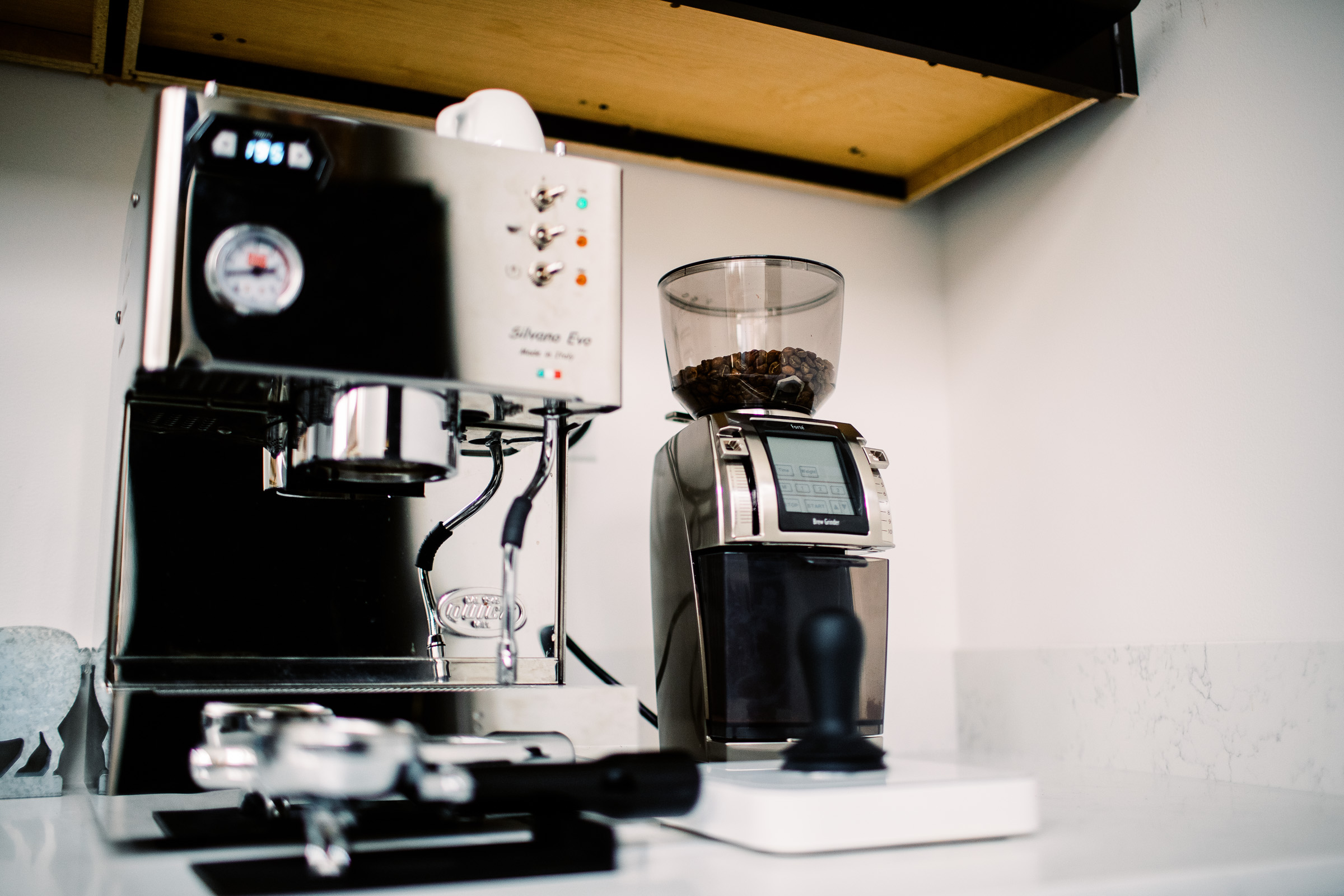 Finally, let’s focus on flavor. There are dozens upon dozens of articles, Twitter arguments, and forum posts to go through to cover how burrs seem to affect coffee flavor - you could probably write an entire book on this subject alone. The tl;dr here would be that burr material, size, cutting pattern, and shape all do impact shot flavor, most likely due to the size and shape of the ground coffee particles they produce. The Forte BG uses somewhat small flat steel burrs, with a cutting pattern that was developed specifically to help produce fewer fines. Traditional flat burrs for espresso may not make that same consideration, and some are of the opinion that fines are good for shot flavor balance and especially for mouthfeel. While I don’t have a hardline stance on burr shape or style, I will say I have especially enjoyed shots produced by larger flat burr grinders like the Mahlkonig Peak or Mythos One, as I have found that they tend to produce cleaner, more complex shots than some of the alternatives, and I don’t personally mind the lower body of the shot either.

Compared to the Sette 270Wi, I found that the Forte BG consistently produced shots that had a cleaner sweetness and acidity that lingered on through the finish of the shot, but didn’t do quite as good a job at pulling a rich, chocolaty shot with a coating mouthfeel. The Sette pulled shots that tasted a little muddier but it was also more flexible when it came to pulling ristretto shots or working with a coffee that was roasted closer to second crack that emphasized nutty and caramel flavors. Both can make a great espresso on their own, but when compared side by side the difference in flavor quality was quite interesting.

Compared to commercial grinders, the Forte BG seemed to hold its own up to a point. When compared against a Mazzer Mini, I found I preferred the Forte’s shots as the Mini burrs seemed to lean toward dry cocoa flavors almost regardless of the changes I made. Against a Mahlkonig K30, the shots were almost equally good and I found it hard to pick a clear winner according to my palate. Against a Peak, I thought the Forte shots tasted muddy and muted (but again, this was only in direct comparison, as I thought the Forte shots were rather tasty on their own). Against a Mythos One, I had the same thought as the Peak: the Mythos produced a cleaner, more complex shot that I preferred to the Forte. Overall, it seems that among similarly priced peers like the Mazzer Mini and Super Jolly, you might decide to buy the Forte if you prefer lighter single origin coffees or blends, and you might go the other direction if you prefer more traditional style blends that favor flavors of chocolate, nuts, and caramel. If your budget and space allow, you can buy more power and cleaner flavors from other large flat burr espresso grinders. 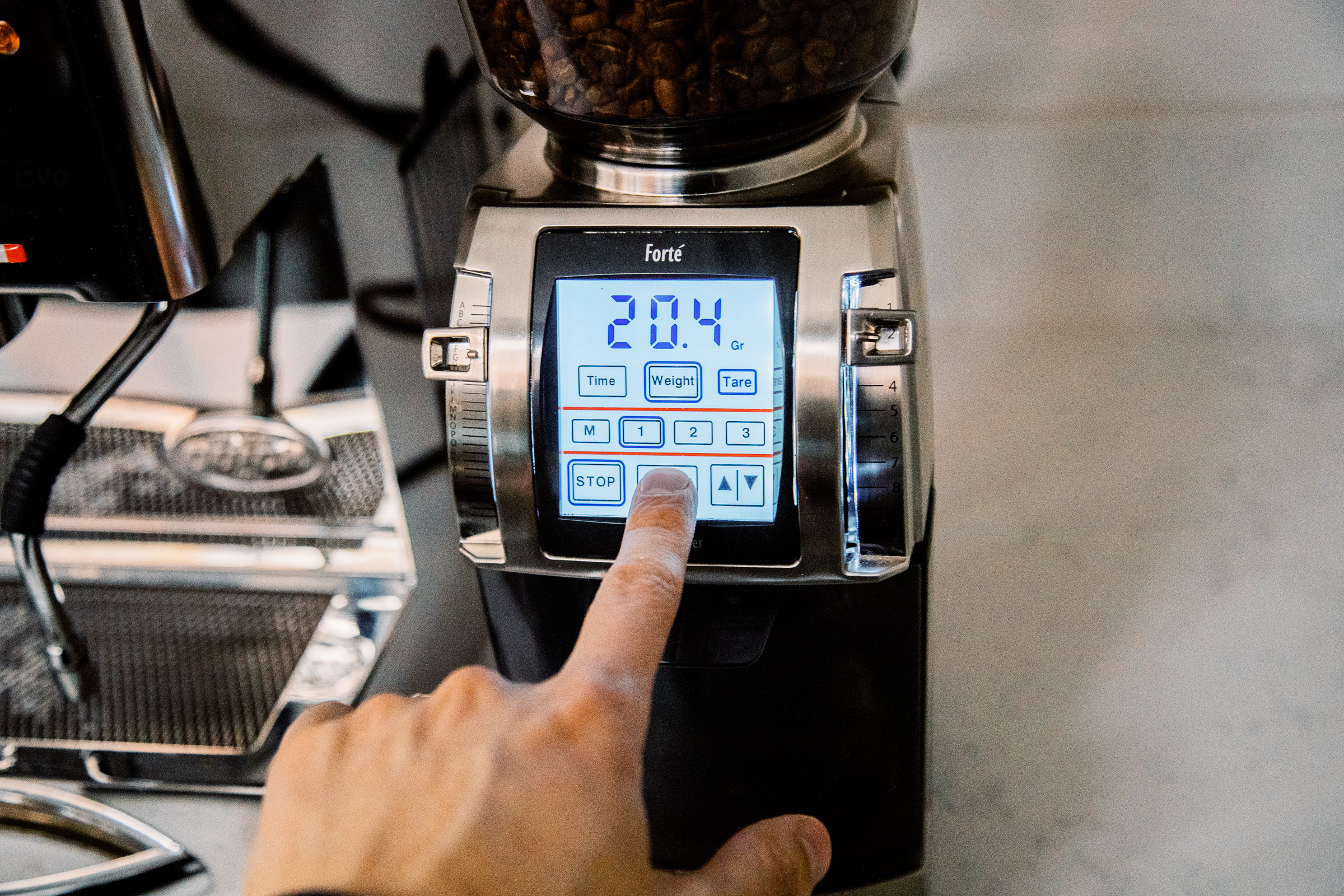 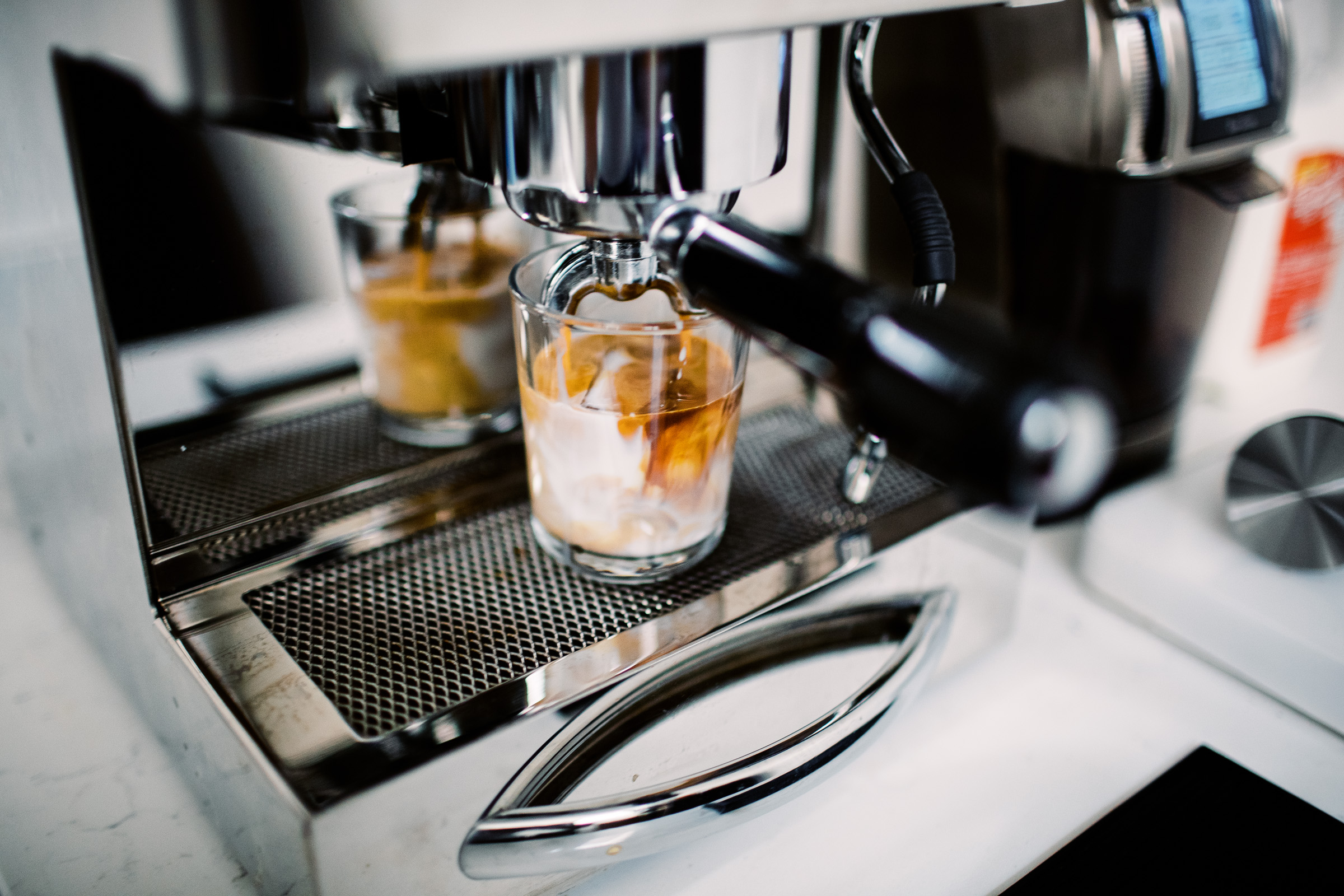 Overall, the Forte BG is a solid performer for its price range, capable of producing quite good espresso that rivals - or beats, depending on you taste preferences - its close commercial competitors. If you’re in need of a smaller grinder that can hold its own in a commercial setting, or something superlative for your home kitchen, the Forte BG is worth your consideration. It won’t be the perfect fit for everybody, especially if you need to crank out lots of shots back to back, but it’s the quality in the cup that keeps us most impressed.