We sell both manual and electric grinders capable of that powdery espresso fineness. We have spent time with all of them. Some, such as those from Baratza and Kinu, we have known for years; others, like the entire Timemore lineup, are relatively new to us. Each has its own charms and advantages, so it is hard to pick a favorite. Perhaps more than anyone, then, we understand the difficulty that comes with choosing just one grinder from such a rich offering, which is why we have decided to provide a little guidance. All the grinders below, organized by budget (and, as a result, features), have what we consider to be essential for an espresso grinder: a stepless (or micro-stepped adjustment system) and burrs engineered to create fines (and, a trait especially important in the hand grinders, efficient bean feeding).

Motors and electronics are costly for manufacturers. As is always the case, then, a dollar goes a long ways with manual grinders. The following models deliver exceptional results for espresso despite their modest price tags. 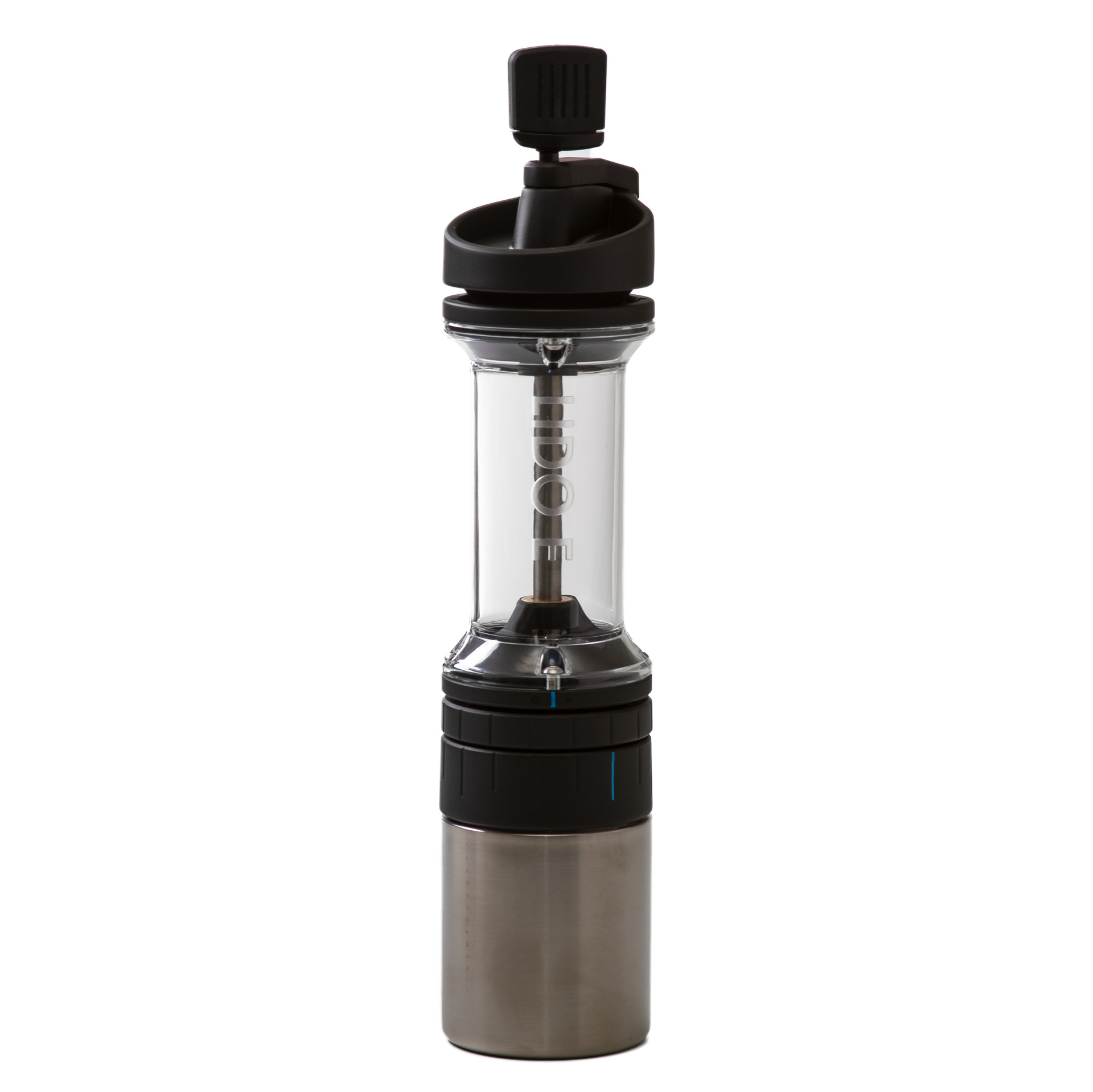 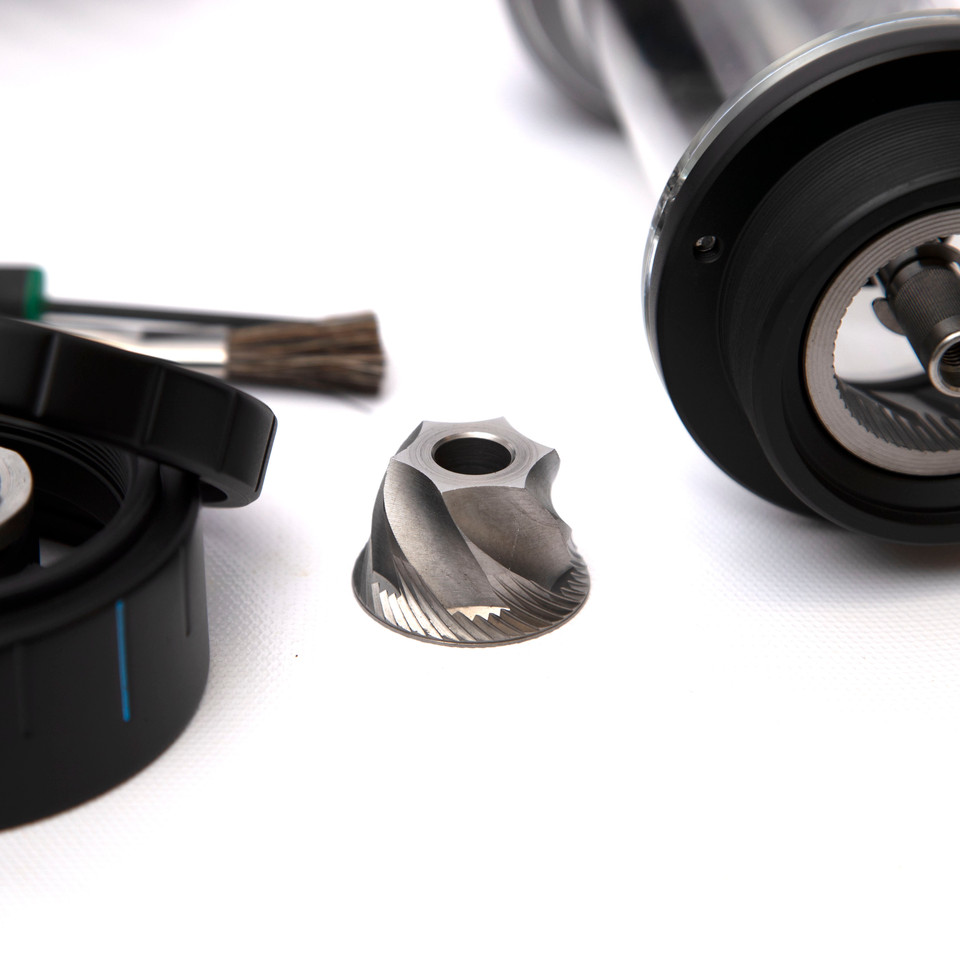 The Orphan Espresso Lido E-T manual grinder is nearly identical to the Lido 3 (brew grinder) but is capable of smaller grind size adjustments, making it possible to dial in espresso. The E-T has 47mm conical steel burrs, a stepless grind adjustment, and an enormous 70g hopper in case you wan to grind for multiple shots at a time. The "T" in E-T stands for travel, so the grinder is made of lightweight materials like BPA-free plastic, has a retractable crank arm, and comes with a Neoprene carrying bag. 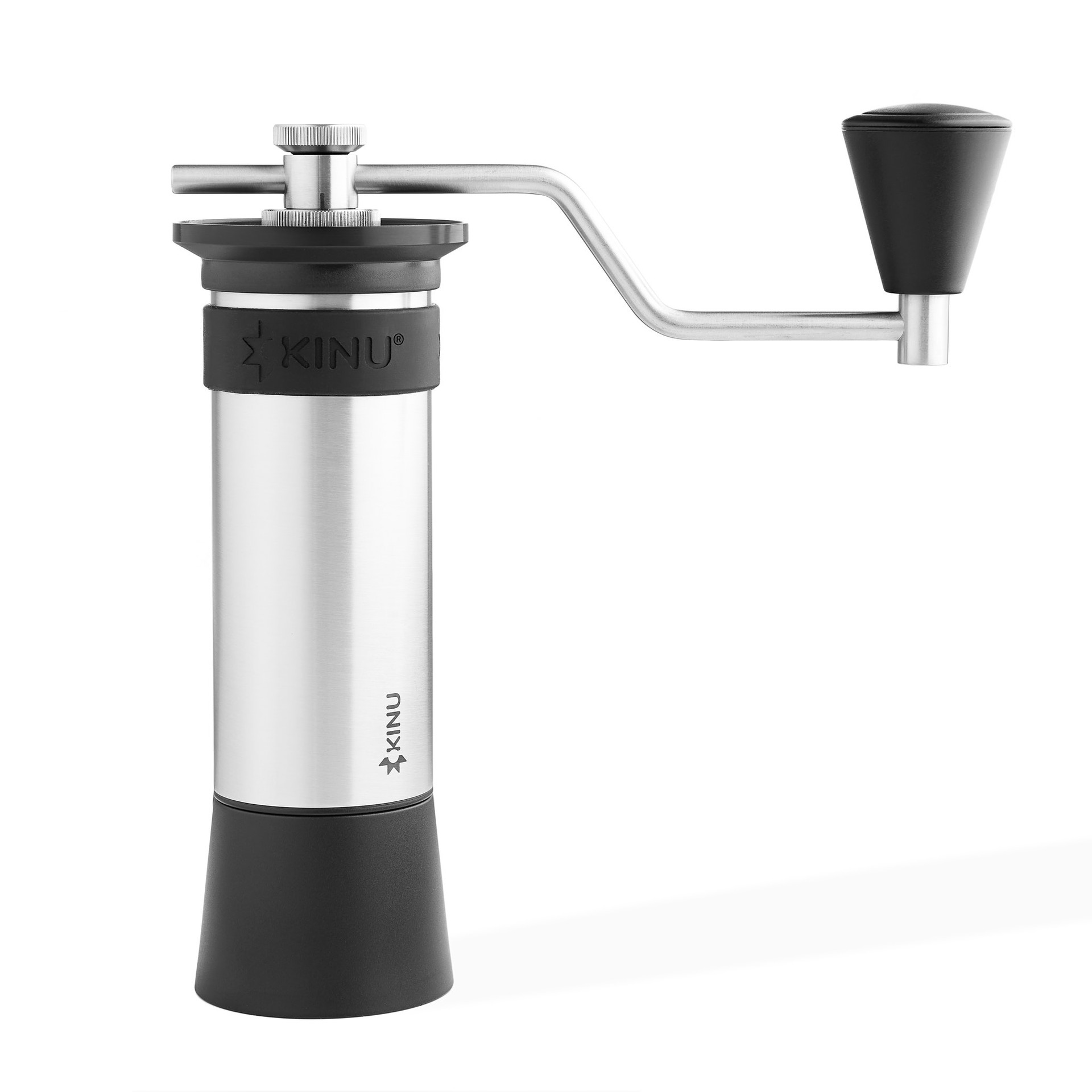 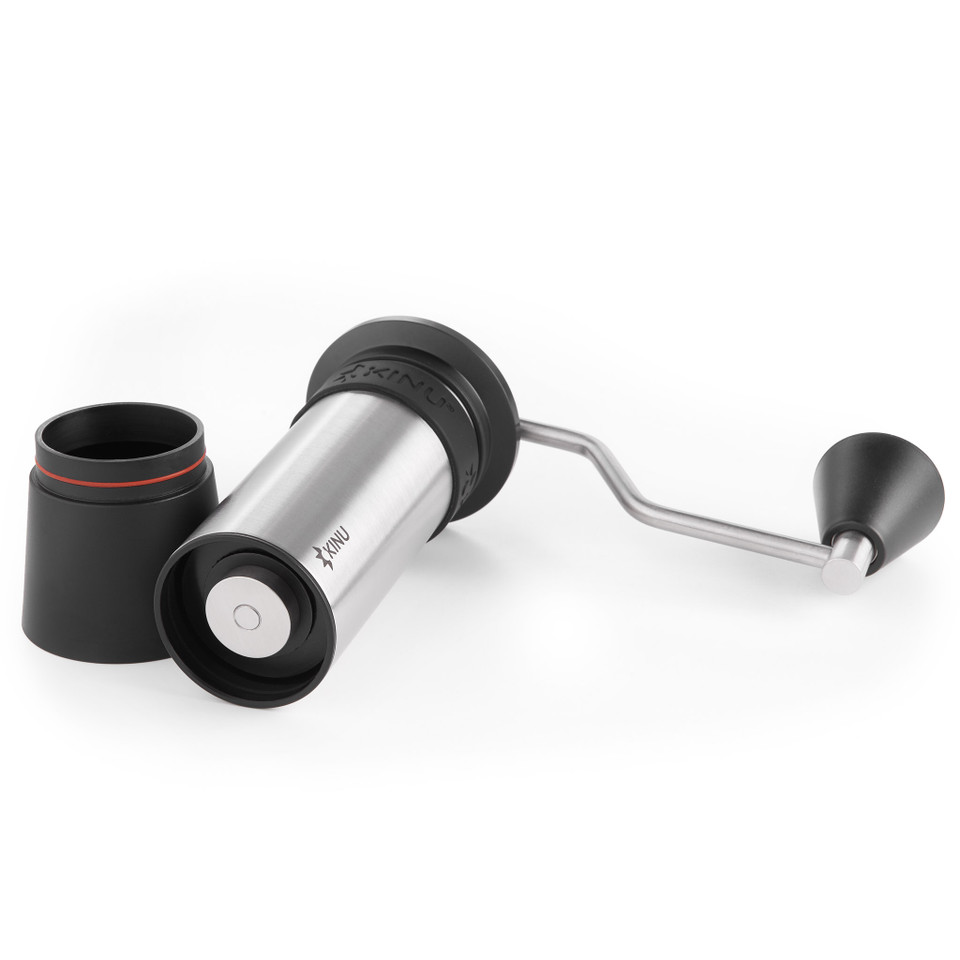 Kinu established itself with the the M47 Classic, a manual espresso grinder capable of making the tiniest adjustments in grind size. Made of all stainless steel except for a few cosmetic accents, the Classic weighed nearly two and a half pounds and cost around $350, putting it just out of the entry-level price range. Later Kinu released the the M47 Simplicity, which had some plastic in place of stainless steel, such as for the grinds-catch and hopper funnel, changes that brought the weight and price down. The latest model from Kinu, the Phoenix, has the same grind quality and stainless steel 47mm burrs, axle, bearings, and easily accessible grind adjustment system of its predecessors but has a few more plastic parts to bring the price even further into play for the budget-conscious barista.

Baratza's Encore and Virtuoso+ have long been celebrated as the go-to entry-level burr grinders for pour over, drip, and immersion methods. Perhaps less talked about, though, are Baratza's entry-level espresso models. The following grinders represent the innovation that Baratza has brought to the affordable electric espresso grinder. 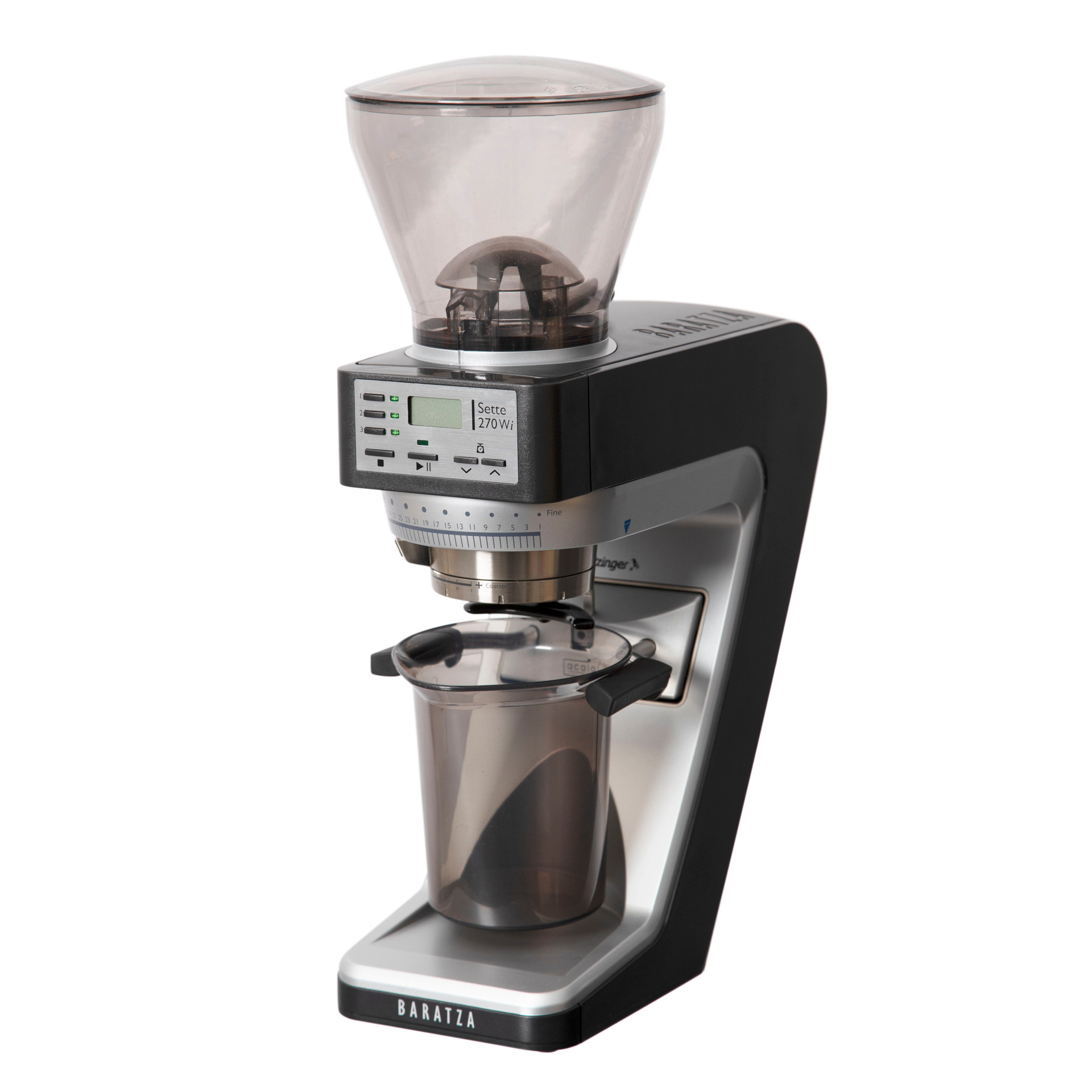 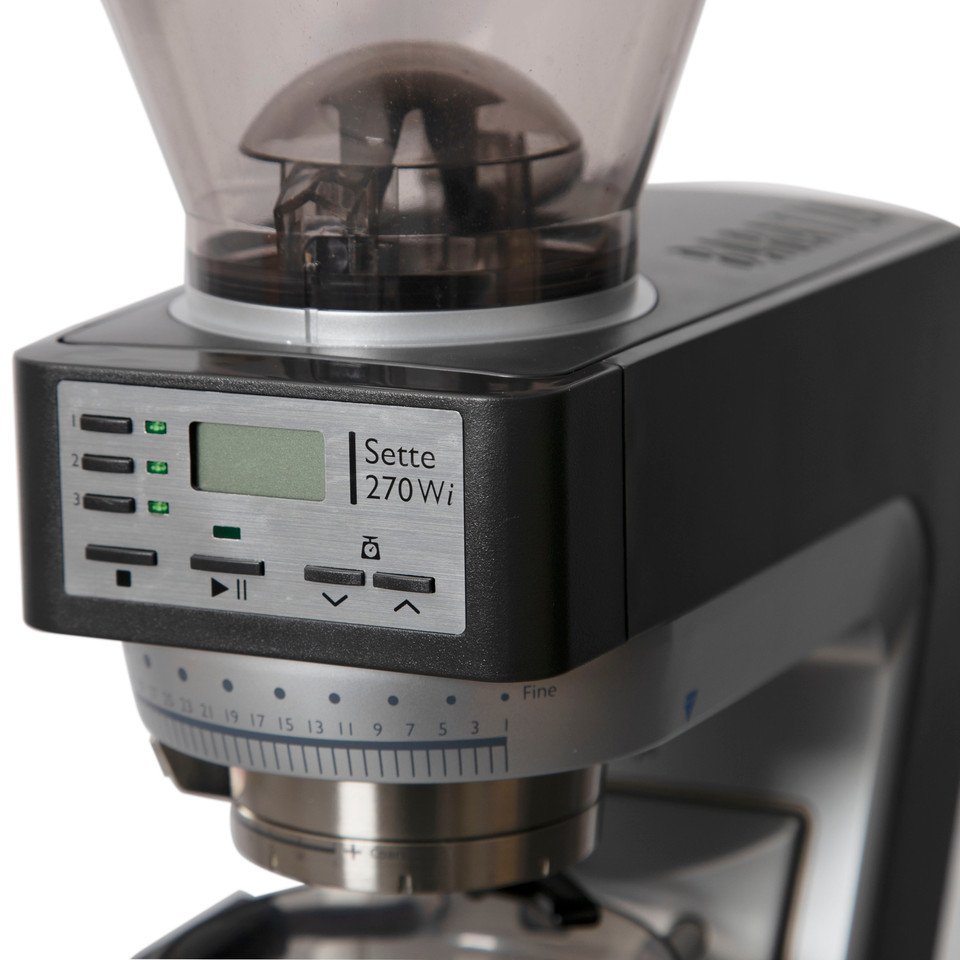 The Sette 270Wi is Baratza's update to the Sette 270 and Sette 270W. While the Sette 270 is the most affordable of Baratza's espresso grinders, it lacks the weight-based grinding technology that premiered in the 270W and was perfected in the 270Wi with Acaia technology. Here the "i" stands for "intelligence" because the scale takes note of over- and under-dosing and learns to provide more accurate dispensing. Other innovations in this series include the straight-through grinding path (for near-zero retention), transforming forks (for a grounds bin or portafilter), and incredibly fast (4g/second at espresso fine) 40mm stainless steel conical burrs made by Etzinger. 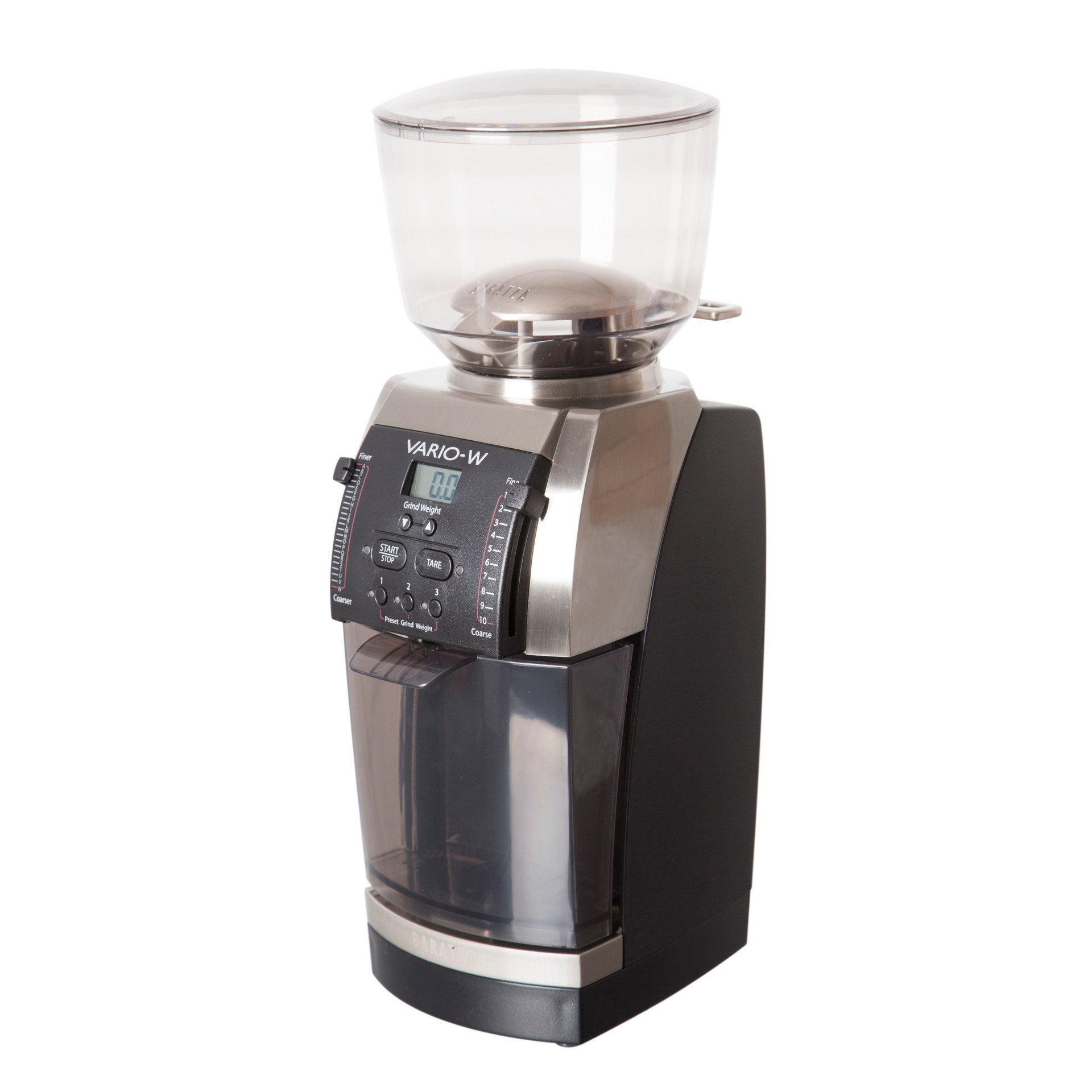 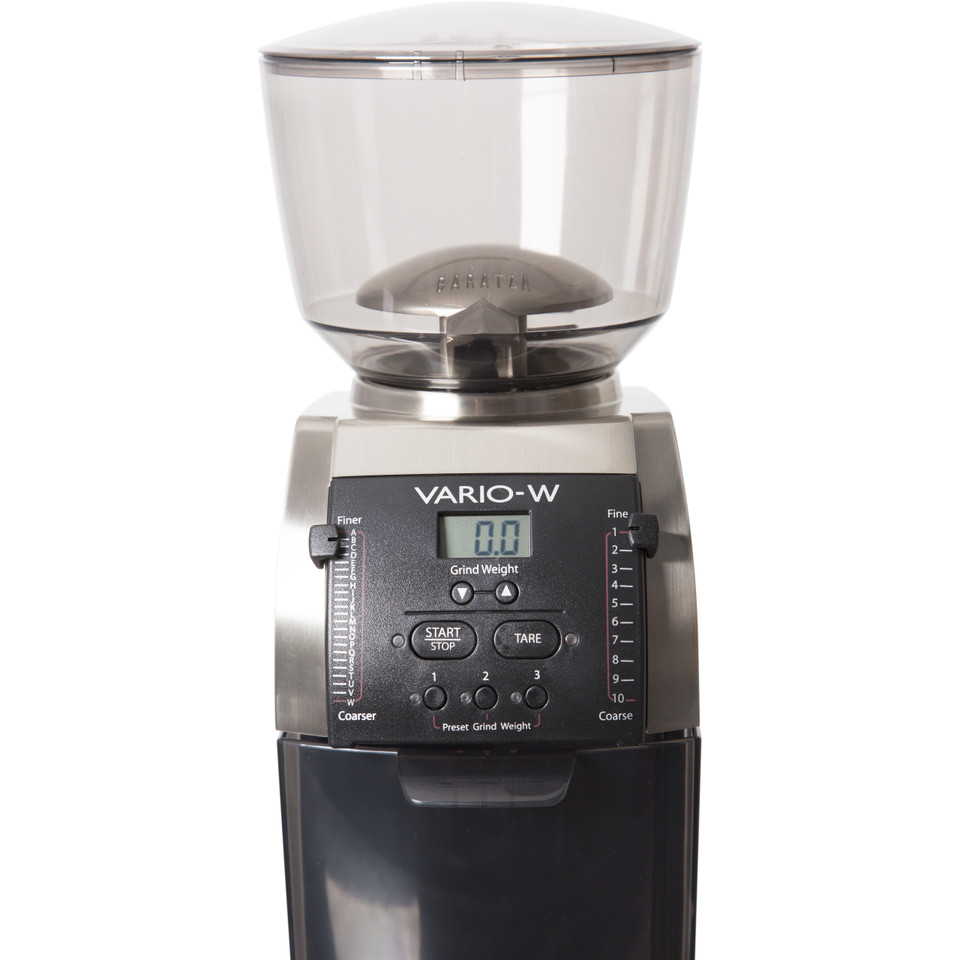 With each step up in Baratza’s line, the grinders gain more features or bigger burrs, or both. The espresso-friendly Vario W comes with 54mm flat ceramic burrs (by Mahlkönig) that last twice as long as their steel counterparts, a dizzying 230 adjustment steps for incredible control over shots, and a built-in scale that is accurate within two tenths of a gram. The W does not come accommodate Baratza's portafilter holder (available for the base Vario model), so a dosing funnel like this one from Espresso Corp is a must.

It takes a powerful motor, big burrs, and incredibly tiny grind size adjustment options for an espresso grinder to pass into the commercial realm. The following grinders are on the cusp. They represent the liminal space between home-only and café-only espresso grinders, and can be seen in both settings all over the world. 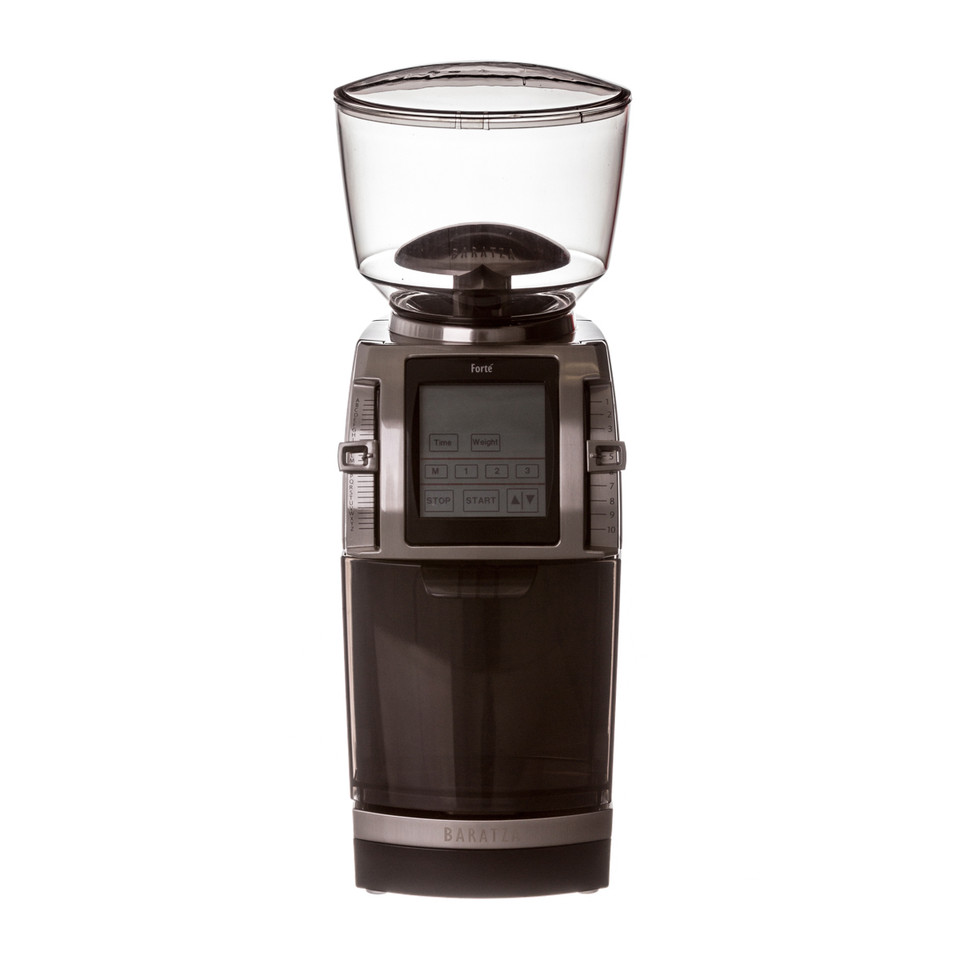 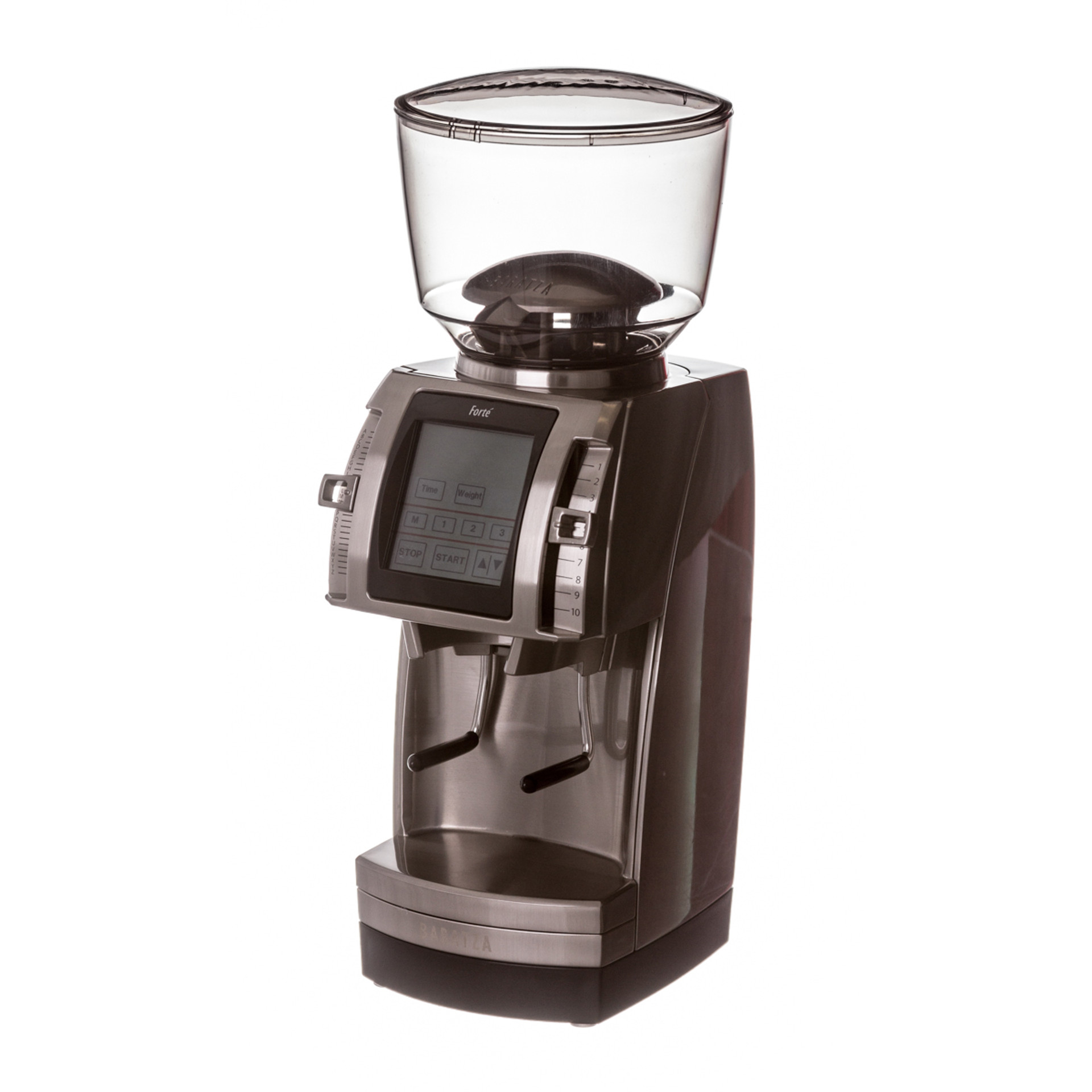 The AP in the title stands for "all purpose," but don't get the wrong idea about this grinder. Unlike the Forte BG, whose stainless steel burrs make it best for brewing, the AP has 54mm ceramic flat burrs that work best for espresso (even though it is capable of the full range). The Forte AP includes all the bells and whistles of the Vario but has a more powerful motor (by 70%), more grind settings (260 instead of 230), and more steel, which is why it weighs 13 lbs. The Forte is a high-end home grinder with commercial capabilities. 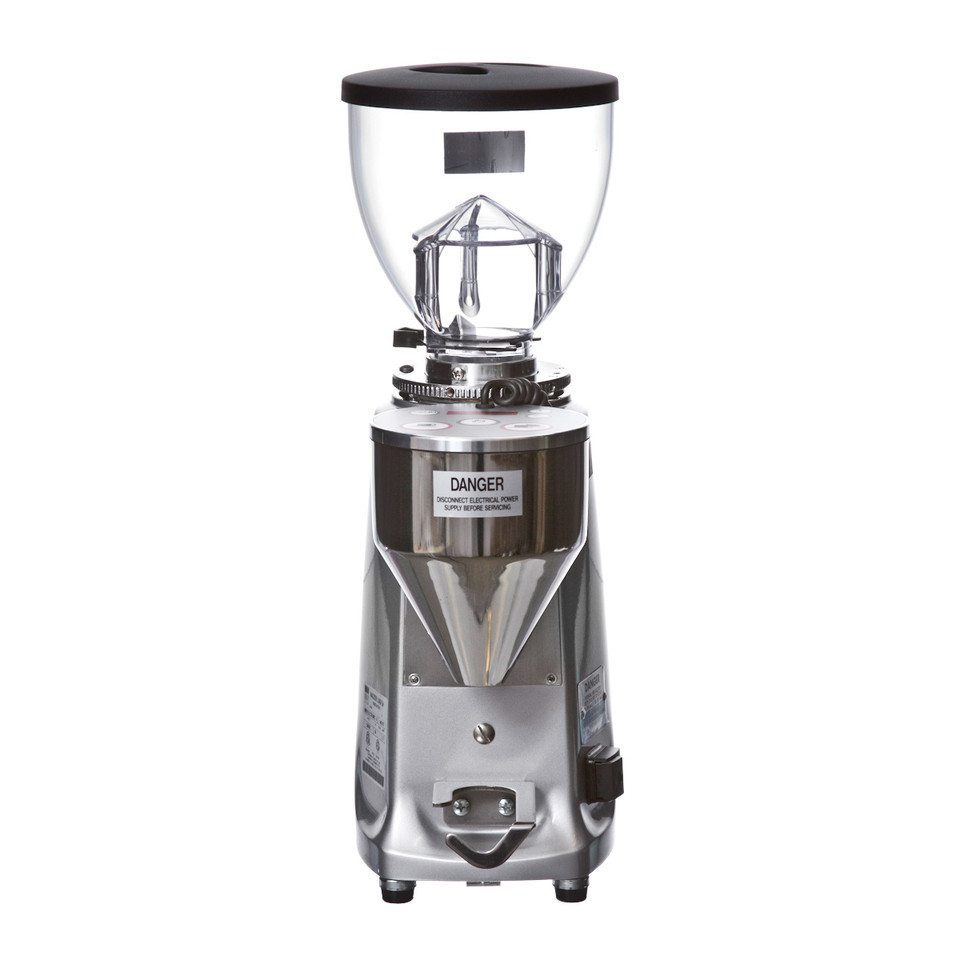 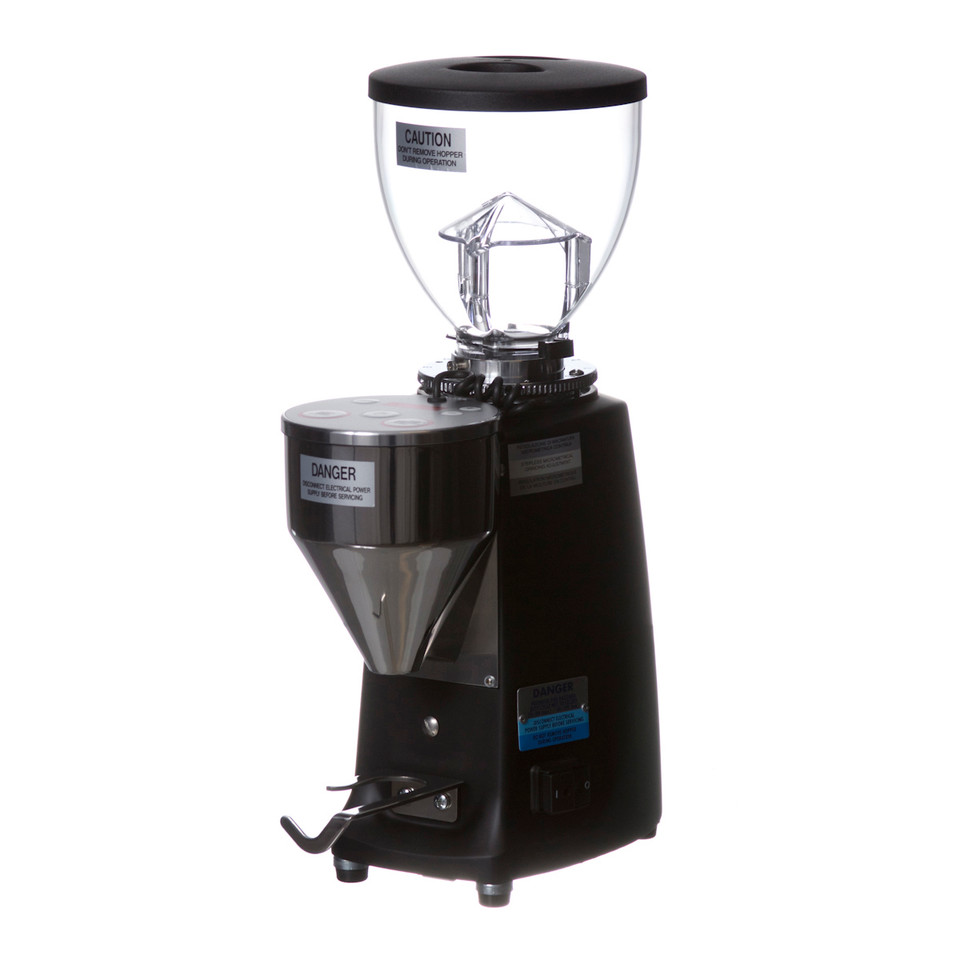 Mazzer has long been a big name in commercial espresso grinders but with the Mini Electronic Doserless Type A it happened upon a commercial machine that just so happens to be perfectly sized for home kitchens, too. The Mini Type A weighs a whopping 22.5 pounds (because of its die-cast aluminum body), has 64mm stainless steel flat burrs, and has a more powerful motor than many other grinders on this list. It is ideal for the serious home barista or as a backup grinder for decaf or single origin espresso at a café.

This year (perhaps more than ever before) the home café has become just as important as the community café. As such, many home baristas spare no expense on equipment, bringing the most beautiful and speedy grinders on the market into their living space. The following grinders represent the higher end of home espresso grinders and have all the enviable features to justify the price tag.

Option-O has been making a name for itself lately with gorgeous grinders, both manual (see the REMI) and electric. The Lagom P64 represents the company's most complete product to date: an incredibly quiet single-dose espresso grinder with 64mm SSP burrs, variable RPM from 200-1400, low retention grind path, and a CNC-machined aluminum body in black or silver. Extras include a spray bottle to reduce static, WDT tool to reduce clumping, and a dosing funnel to directly fill portafilters. 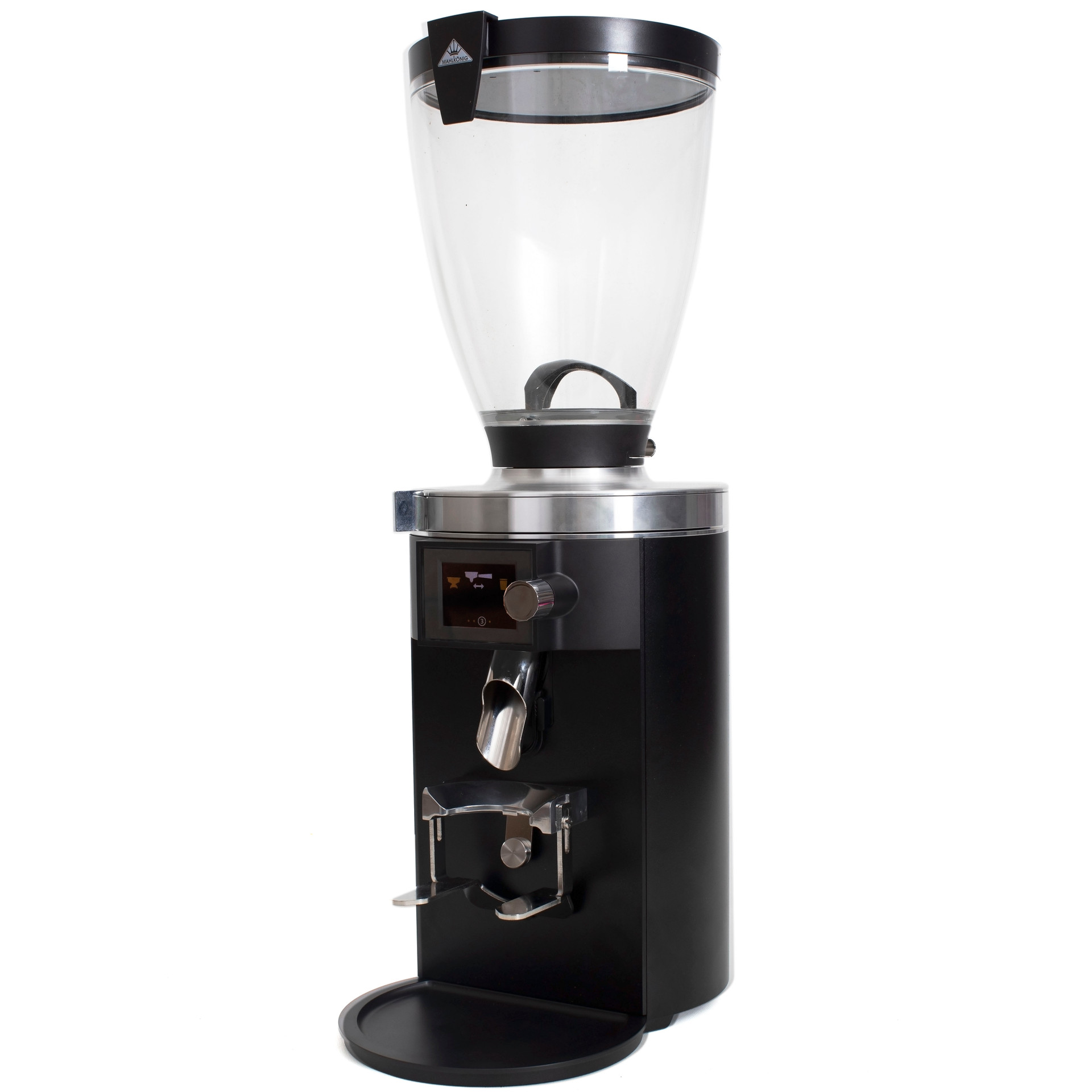 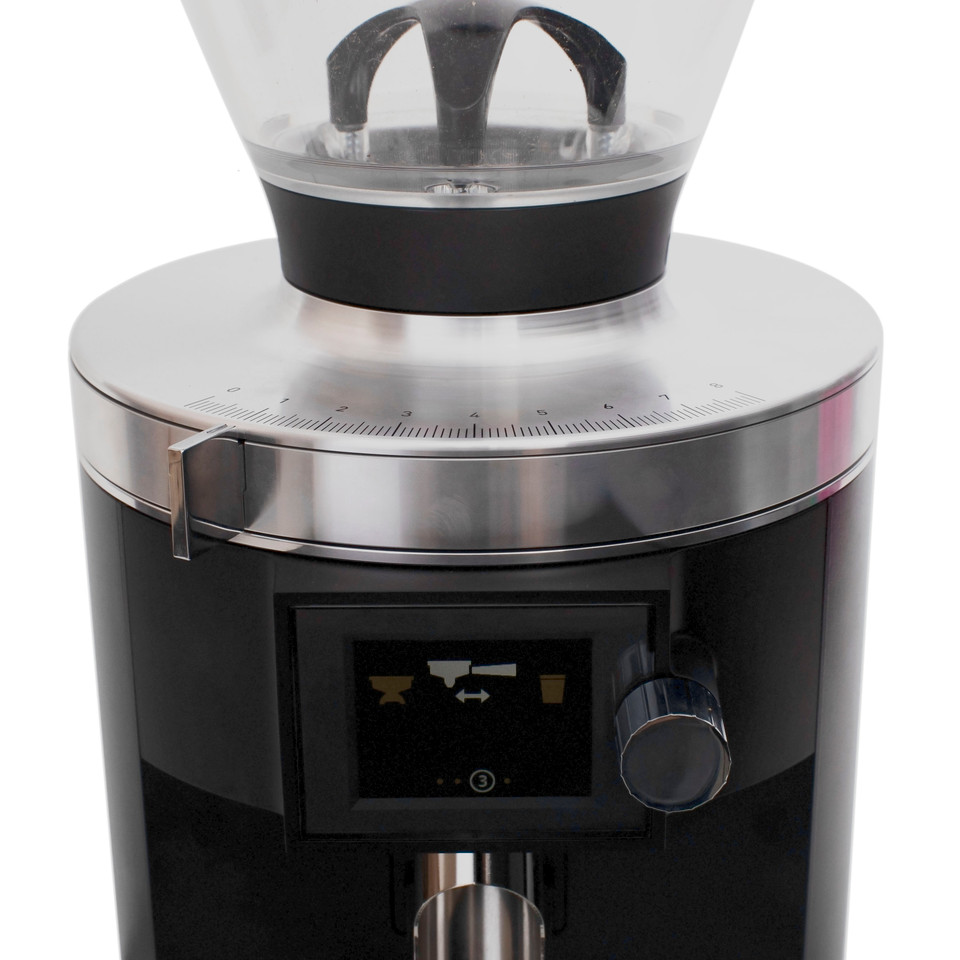 Mahlkönig is possibly the biggest name in coffee grinders due in part to the success of its flagship EK43 (and smaller EK43S) that graces countertops of nearly every third-wave café around the world. Mahlkönig's newest espresso grinder, the E65S, features 65mm flat steel burrs, remarkably speedy grinding (5-7g/s), which means a full dose in ~5 seconds, and eight custom grind-time programs that accurately dispense coffee grounds to the tenth of a second. If the hopper is a little too tall for your kitchen counter, consider the mini hopper to save about nine inches of headroom.

Choosing the right home espresso grinder is a difficult task considering the profusion of options: manual or electric or electronic; flat or conical, ceramic or steel burrs. Plus there’s the matter of style. And of size. And what about color? A home grinder, after all, should fit in with your kitchen decor just as it should fit snugly under the cabinets. Lucky for you, we curate a selection of grinders that we believe in, so you can’t go wrong with any of the above or any in our catalog.